With interiors by Kelly Wearstler and a Philippe Starck-designed spa, the very stylish Viceroy Miami has it all. Although a little bit big to be defined as a boutique hotel, everything has been carefully studied to give the same impact and service one would find at a smaller, more intimate establishment. Throw in the flawless service, the spacious rooms and the incredible food at the Eos restaurant; the Viceroy Miami wins our hearts over without any trouble.

Almost missing the discreet entrance, we were taken aback by the unexpectedly quirky Art-Deco decor as soon as we stepped inside the unusually small lobby. The interior could have toppled into the kitsch category, if it weren’t for talented designer Kelly Wearstler’s keen eye for detail and coordination. The floor to ceiling drapes printed with turquoise ocean waves in a classic Japanese style tie the lobby’s myriad textures together in an elegant twist. 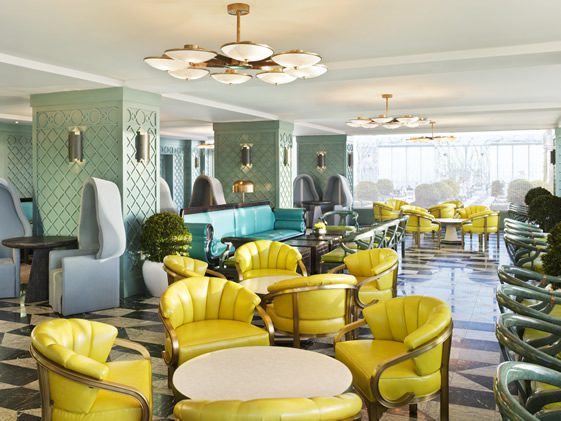 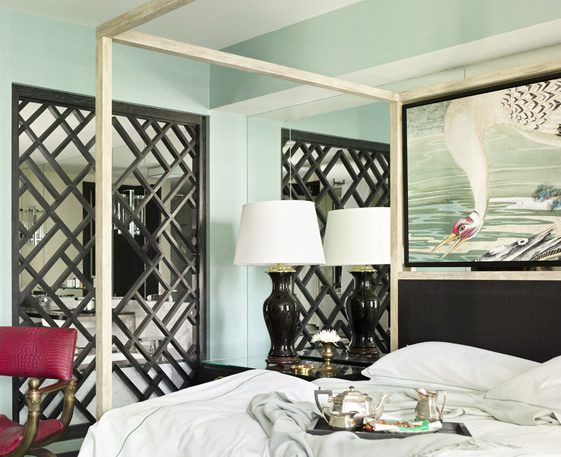 A giant white partly complete sculpture of a head lies on the counter like that of a sleeping Buddha’s in a Thai temple, but despite the seas of blues that decorate the lobby, the spotlight usually falls on the chair in the shape of hot pink lips placed in the centre, which has become some what of an icon for the hotel.

Unlike most places, the Viceroy has two pieces de resistance and they are both are accessible from the topmost floor, the fifteenth floor. The first is the Eos restaurant and the second is the sublime Starck-designed spa.

Once out of the lift, the Art-Deco corridor greets guests with a mesmerising play on perspective and a modern spin on Matisse’s Escargot, and leads to a real bijou of a restaurant, which we highly recommend even if you are not staying at the hotel. The restaurant has a European Art-Deco interior, which you will see varies largely from the typical examples of the movement in South Beach. Although gaudy, the restaurant decor remains tasteful.

A mix of cream leathers, highly polished brass spaceship-like chandeliers bringing out the Star Wars-like space vessel interiors and Aztec friezes, the restaurant does grow on you after an initial cold first impression. The decoration aside, the food here ranks extremely highly and is the best place to eat in Miami. A strong Greek influence runs through the cuisine whipped up by chef Michael Psiliakis. In the daytime, the restaurant changes from its elegant and sophisticated robe to a more casual look. Even its name, Eos, becomes ‘Bistro e’. The heavy decor takes a back seat as the views of Downtown Miami seep in through the restaurant’s large bay windows. 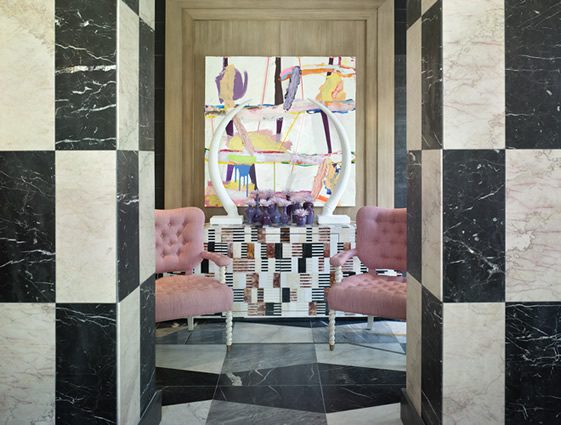 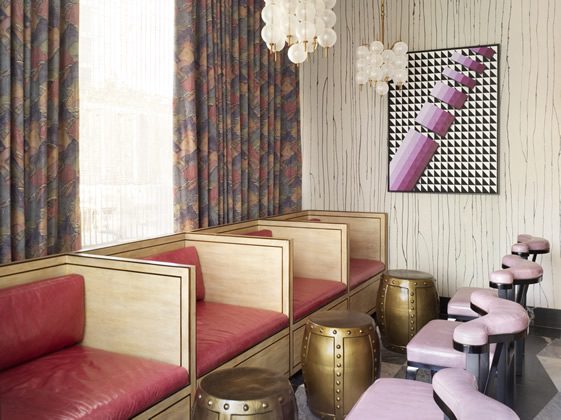 Back through the corridor and outside, is the record-breaking rooftop pool, which is the longest rooftop pool in Florida. Olive trees planted in oversized flowerpots are dotted around the pool make the area very appealing for relaxing. There are also lovely views out to the sea and Brickell Key from the very end of the pool on the sun deck.

Off to the left of the pool, the clean white environment of the tower where the gym and spa are located is like stepping into another world after the seemingly cluttered Art-Deco fantastical world of the main hotel building. As we walked to the spa across the gallery above the spa pool, we could not help but stop to take it all in.

The seating is plunged into the pools, an oversized fireplace with Victorian sofas upholstered in tartan sit at one end of the spa pool, floor-to-ceiling mirrors and deep mahogany book cases line the walls holding up an enormous bay window on either side, a giant chandelier in Starck’s typical elegant romantic baroque style hangs from the ceiling in the centre of the room. With soothing music and lime greens to lift the otherwise entirely white area, the spa is the raison d’être of the hotel for many in-house guests and day visitors. 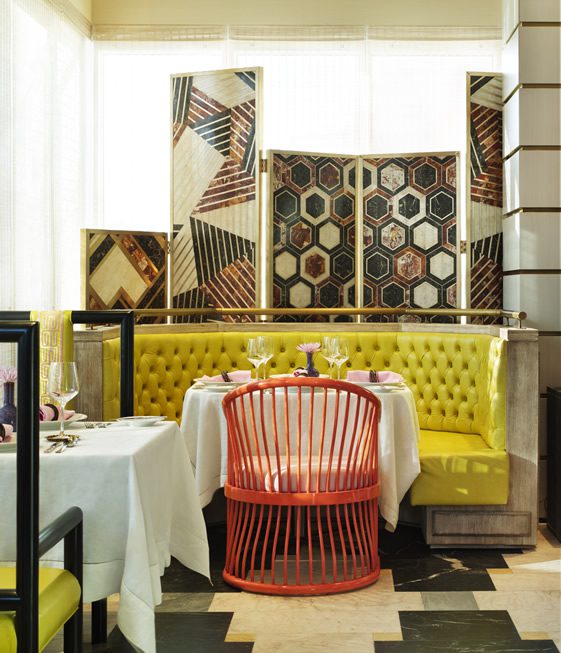 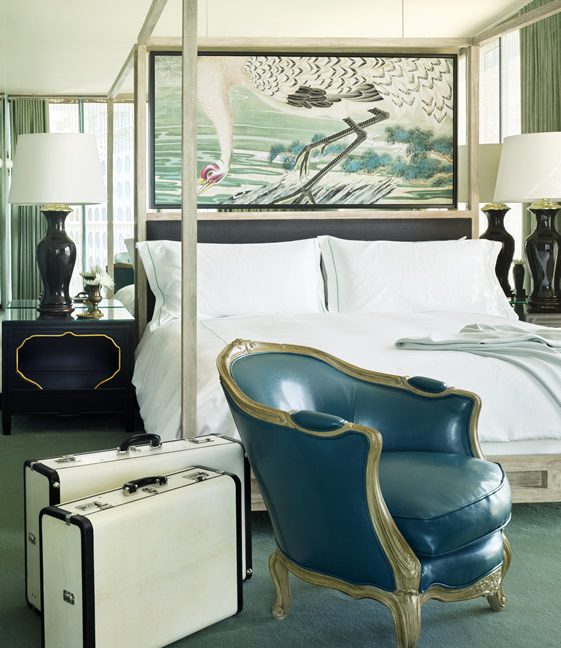 Up to the rooms, which are all suites featuring a kitchenette, dining area, living area and separate bedroom, are equally as sumptuous, with a multi-layered palette of emerald green, onyx and slate to complement classic forms and organic finishes ranging from antiqued wood and mirror to veined marble and reflective brass create a smart yet cosy atmosphere. Despite the rooms looking like every item of furniture was handpicked, the 162 rooms are decorated very similarly. This could instigate disappointment at the lack of uniqueness of your room which you will without doubt find exquisite, but actually, this ‘mass-production’ approach perfectly reflects the Art-Deco movement at its roots: the industrial revolution.

The process of mass production was revered; especially in late ’30s America as goods became readily available to the average layperson. However, this theme has been embellished by Wearstler’s exceptional taste. The extremely spacious rooms not only look absolutely dazzling with their lime green leather arm chairs, oversized marble desks, and marble floors, finished with a selection of quirky brass Art-Deco lamps. In the bedroom, the décor is a little more sober. The main feature is a contemporary king size four poster-bed dressed in luxurious crisp white Sferra linen designed by Wearstler especially for the hotel.

Despite being a little far from the South Beach bustle, the Viceroy Miami is a winning formula of highlights wrapped in one neat understated exterior among the Downtown skyscrapers. 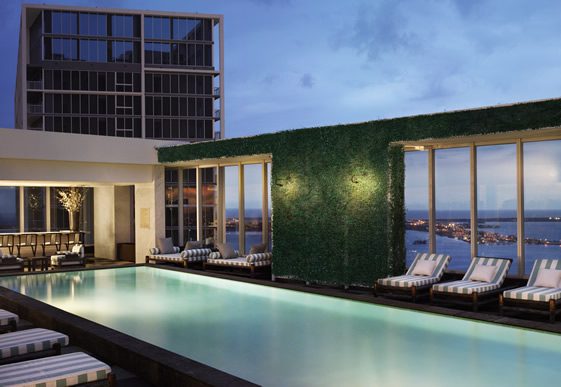 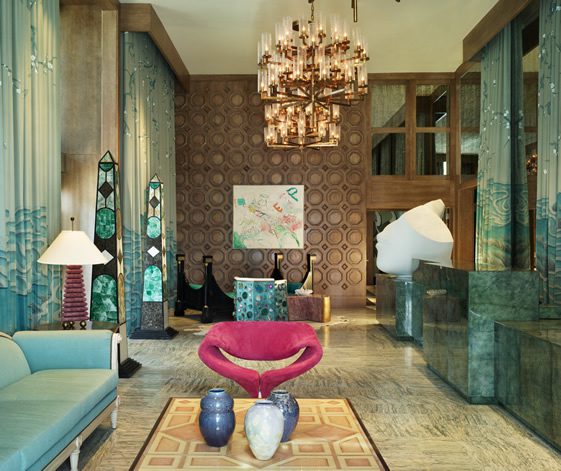 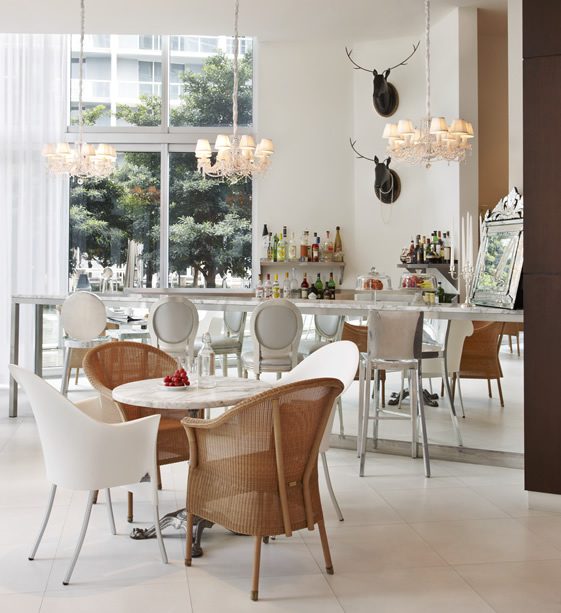 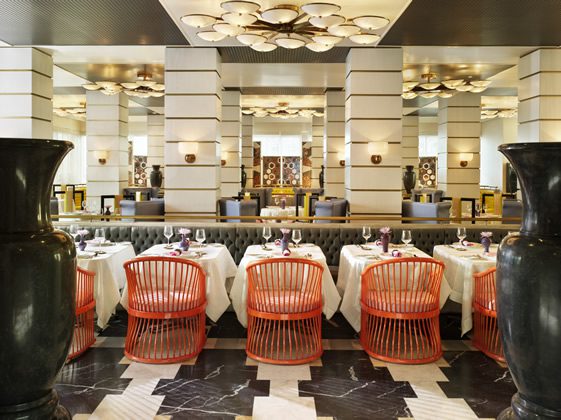 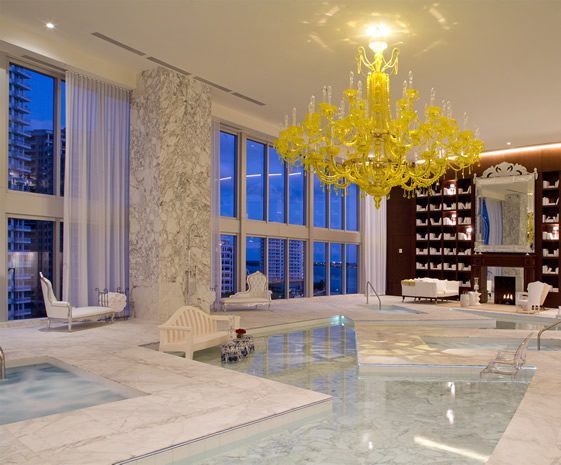 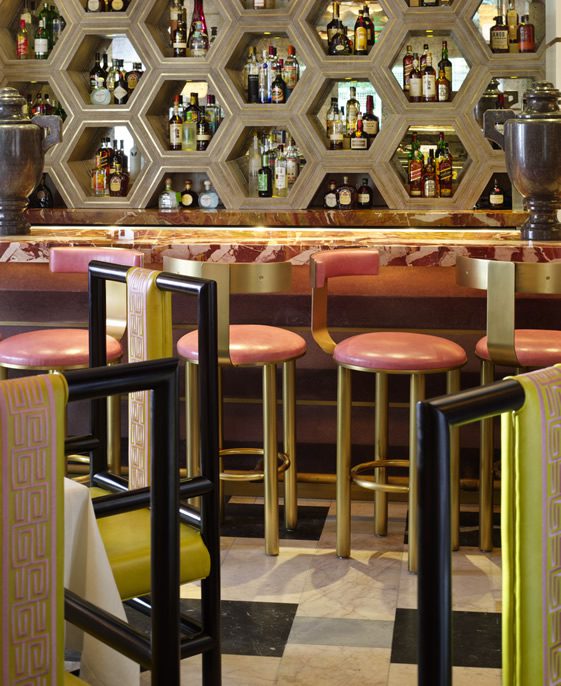 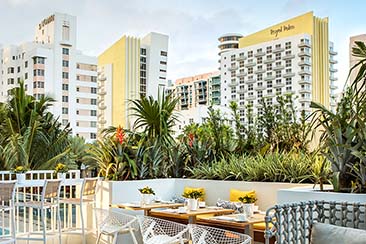 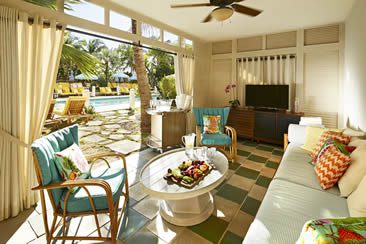 Can you keep a secret? Miami Beach's 4041 Collins Ave is making a name for itself again...

Number 4041 Collins Ave, Miami, has gone through a few changes over the years. Beginning life as the Lord Tarleton Hotel before reopening in 1955 as the Crown Hotel, and more recently operating as Thompson Miami Beach. Like David Bowie in... 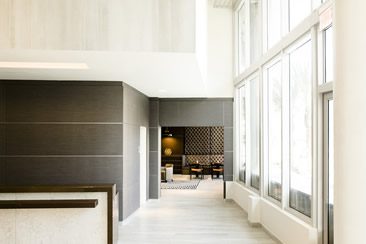 Although the AC Hotels brand is part of the Marriott group, it is the creation of Spaniard Antonio Catalan and bases much of its appeal on a European cachet that goes over so darned well in the United States. AC Hotels has picked the perfect place... 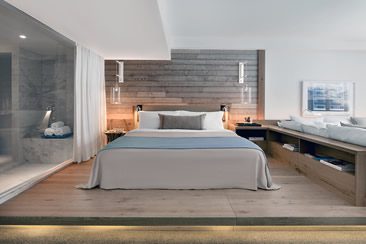 We are recycling more than ever. We are thinking about our impact on the environment from farming methods, how the things we buy are transported, and our carbon footprints are increasingly to the forefront of our decision making. In short, we care...