Tea, coffee? Coffee tea? There’s some debate over which is the world’s most popular beverage after the necessity of water, but with over two billion cups consumed each day, coffee is undoubtably integral to our daily lives. 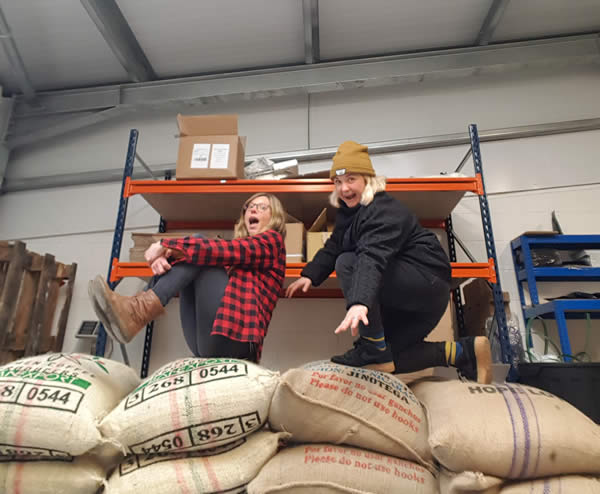 The global backbone of its growing and harvesting workforce, though, is female—with 50—70% of manual lesser-skilled tasks being performed by ladies. So what about the women in power? The CEOs, the plantation owners, the decision makers in this dominant global empire? Sadly, the women in positions of power are few and far between.

Founded by Melbourne-born Fi O’Brien, ex-café owner and current creative and branding consultant, and expert coffee roaster Casey Lalonde, originally from upstate New York—Girls Who Grind Coffee are out there to prove otherwise. The UK-based small-batch coffee roastery ‘run on grrrl power’ have coalesced their unique skills in the south west of England, hand-roasting their own speciality coffee, specifically grown and harvested by likeminded female coffee experts from around the globe.

We Heart spent some time with girl boss Fi O’Brien, finding out why it is so important for the duo to give a voice to the unsung female heroes behind our beloved beans.

How did the idea for Girls Who Grind Coffee come about?

Fi: Girls Who Grind Coffee is a brand concept I conceived a year or two ago. I knew it had potential, and then in early 2017 Casey and I got talking about founding our own coffee roastery; making great coffee and giving a voice to women in the industry. While I continued to develop the brand, Casey focussed on sourcing the perfect green beans, with a resolute focus on female farmers, producers, and those that work to support them. 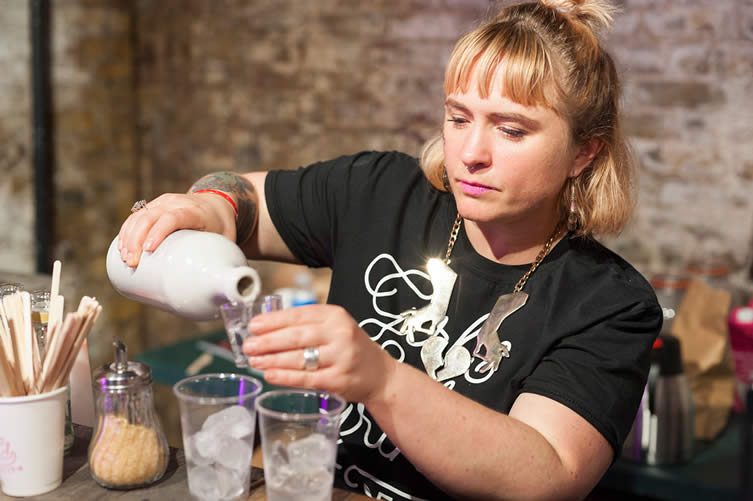 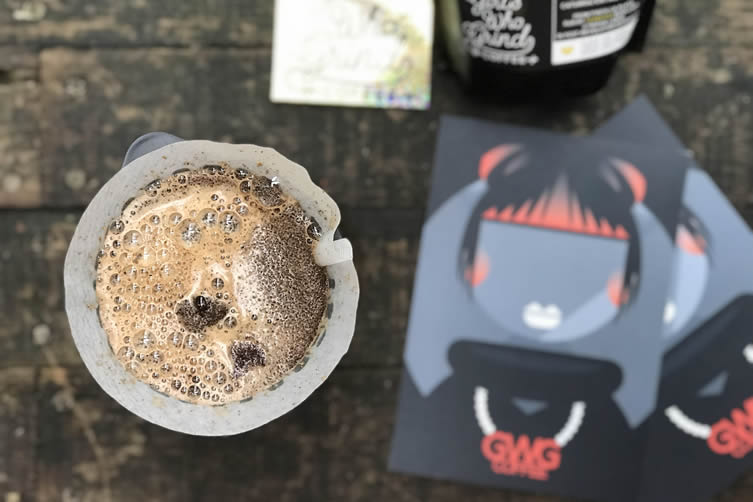 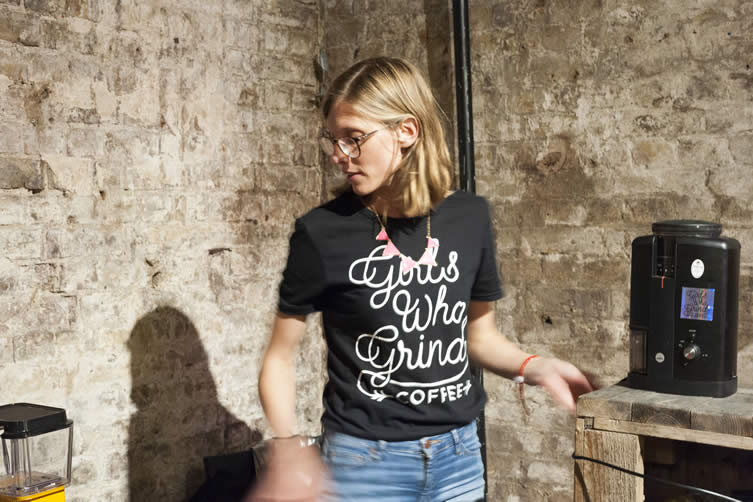 And when did the project officially launch?

In October 2017 we launched our first coffee, a stunning Guatemalan Huehuetenango from a female cooperative, ASDECAFE, at Festifeel, a breast cancer awareness event at House of Vans in London; donating 50p from the sale of each pack during the festival to breast cancer charity Coppafeel. It was the perfect opportunity for us to launch our coffee to a great crowd of strong, kickass women.

Your brand celebrates and supports women in coffee, what gave you the inspiration to big up the ladies? 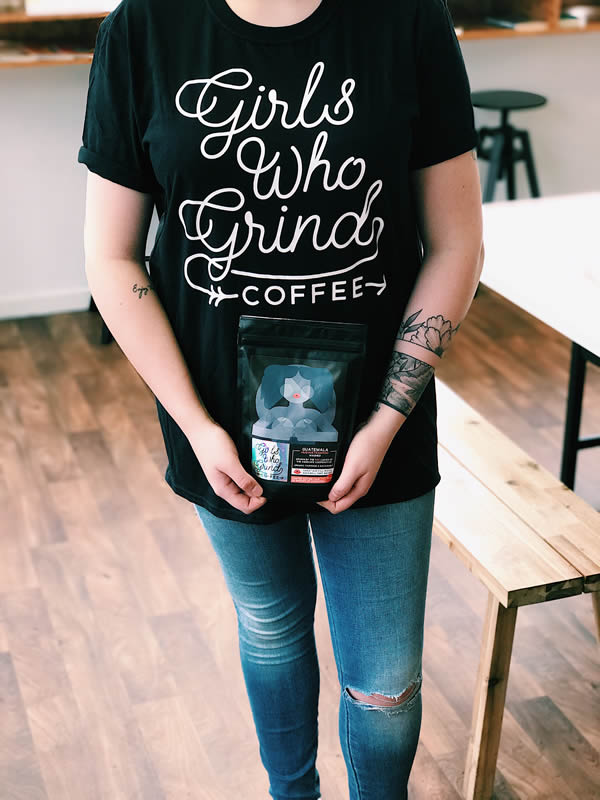 We felt the coffee industry was very male dominated, especially within roasting, and wanted to create more balance and equality. Now felt like the perfect time to show the world that women also make for kickass roasters and baristas. Women make up the majority of the coffee farming industry, but are usually lesser paid and work in poor conditions; with very little say or control. Really, this is the driving force as to why we work with female cooperatives—who have women in management positions—and non-profit organisations that support these changes for women on all levels in the process.

Tell us about some of these inspiring females?

Each of our five (current) coffees has amazing women behind them in one form or another. Our DR Congo coffee supports the awe-inspiring Rebuild Women’s Hope Program; established by gender equality pioneer Marceline Budza. RWHP transforms the lives of Congolese women through entrepreneurship and economic empowerment training in the coffee chain. It is no secret that the life of a Congolese woman is incredibly difficult, and to have a program like this in place is nothing short of life-saving. Another example is our Nicaragua Jinotega from Finca La Plata, a farm run by fearless boss lady Cynthia LaRue, who returned to Nicaragua to rebuild her family’s coffee farm after the revolution had forced the family to flee to the USA some years earlier.

Our focus is on sourcing single origin coffees from female cooperatives from all coffee-growing countries around the world. Our current selection comes from Rwanda; Nicaragua; Ethiopia; Colombia; and the Democratic Republic of Congo. 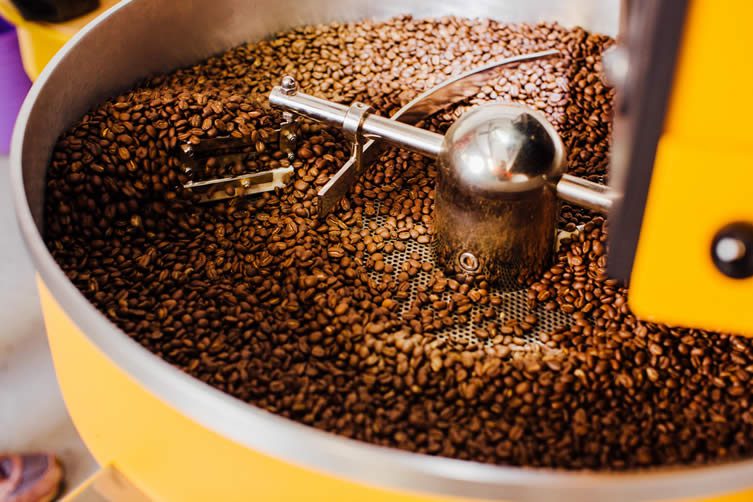 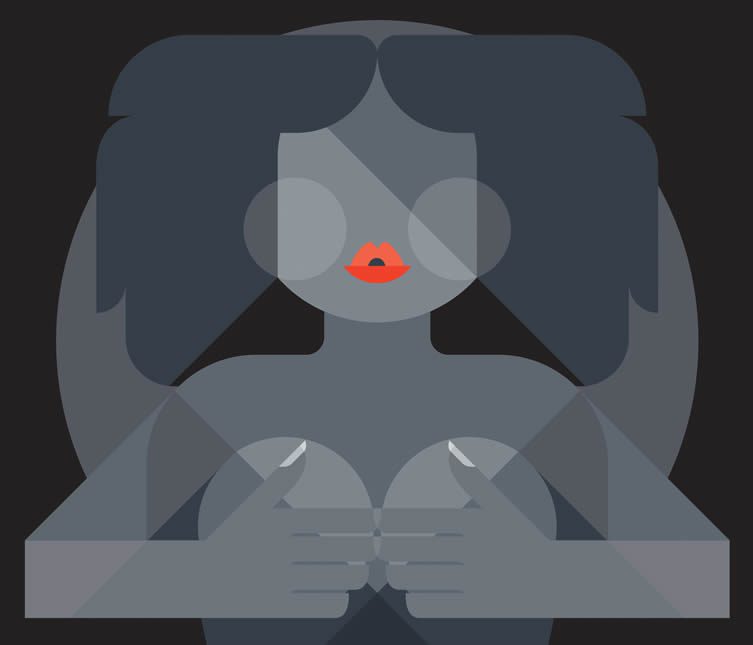 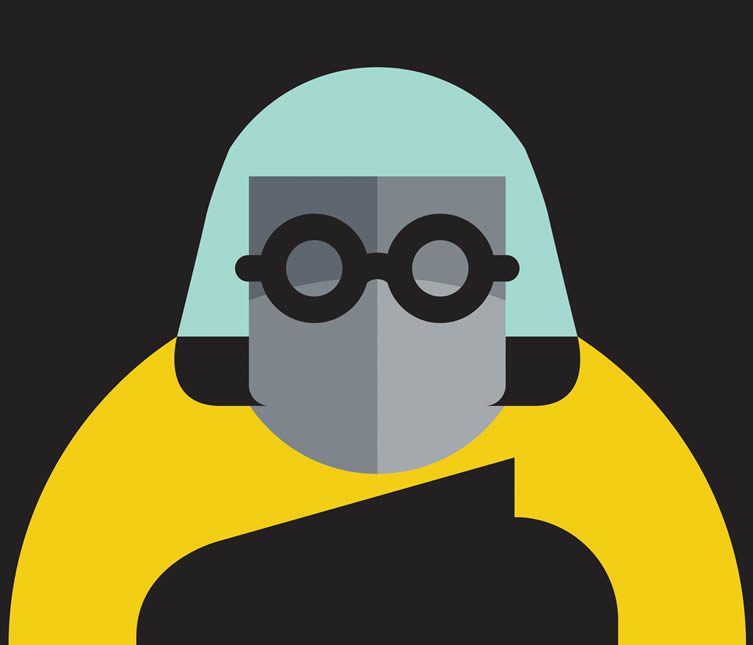 As specialists, please tell us about the roasting process, your own workshop, and how to perfect the ideal roast.

We have an awesome (albeit freezing) workshop on a working farm in a little village called Upton Scudamore, Wiltshire; surrounded by fields and horses. 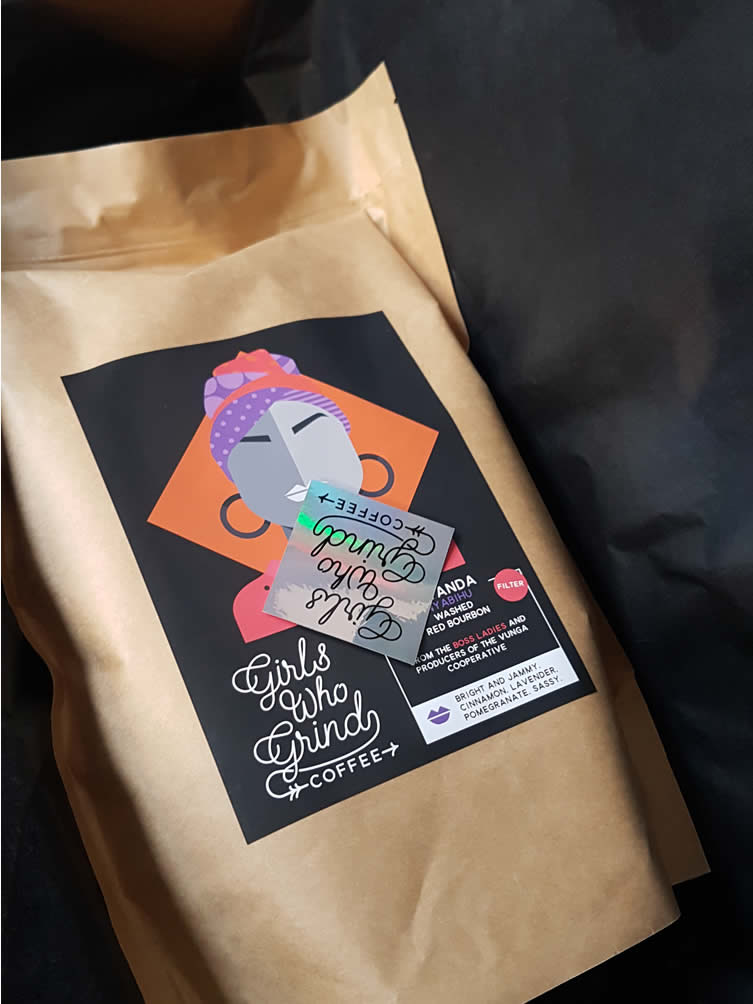 Our roaster is a fabulous bright yellow Giesen W6 named Aunt Edie. It is a traditional double-walled drum roaster with two fans so we can roast and cool beans simultaneously. Casey’s background is as a roaster in the States, her symbiotic relationship with coffee has been invaluable as she also comes from a time which was much more look and feel rather than relying purely on technology; which does seem to be the way the industry is moving. Having said that, we do use Cropster—a roasting software that helps create and track roasting profiles.

Our aim is always to bring out the best possible flavour in all our coffees. To do this we sample-roast all of our beans on our Ikawa roaster to get a feel for the intrinsic characteristics of that coffee. We then take into account processing method, density, and moisture to create a starting roast profile. For a more floral coffee, we would roast a bit quicker to preserve those delicate flavours. To bring out great chocolatey notes we would develop the coffee more to bring out richer notes with a smooth body. The process takes a lot of trial and error, and lots of tasting. So. Much. Tasting. Not that we’re complaining …

And your brand identity? The illustrations and type are so bold and beautiful, who created the identity and what was the inspiration behind it?

Being from the mean streets of Melbourne, my favourite colour will always be black. Too many female brands use pink, too many coffee brands use brown, so to stand out I knew the basis of our brand identity would be black. For years I have worked alongside my husband, Ben the Illustrator, so I borrowed his vector skills to bring together the branding I was envisaging; a little bit of tattoo type, a little bit graphic pop-punk. If anything, the branding is inspired by the creative women that have long inspired us—from Vivienne Westwood to Ray Eames, from Michelle Obama to Missy Elliott. 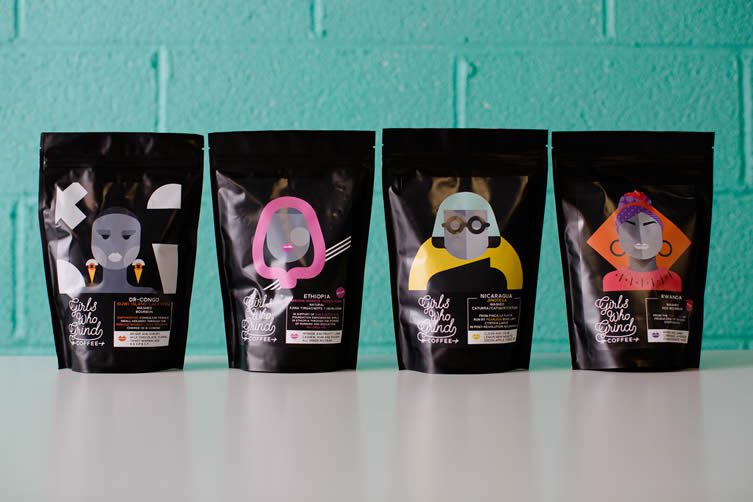 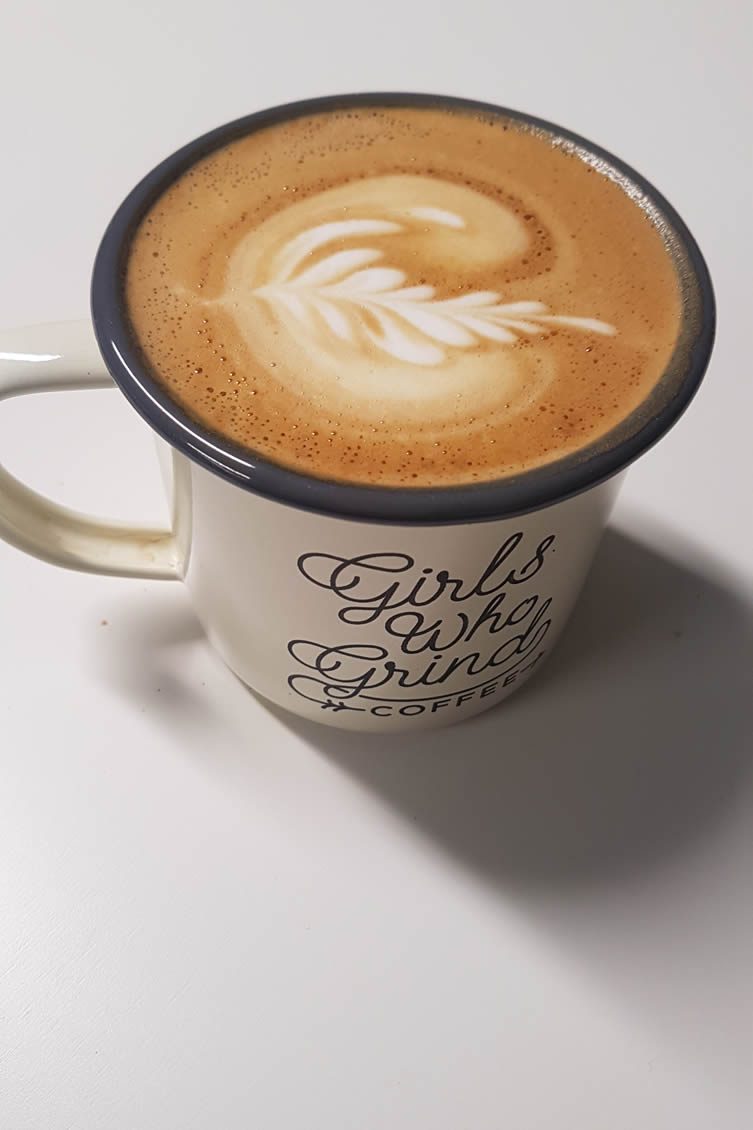 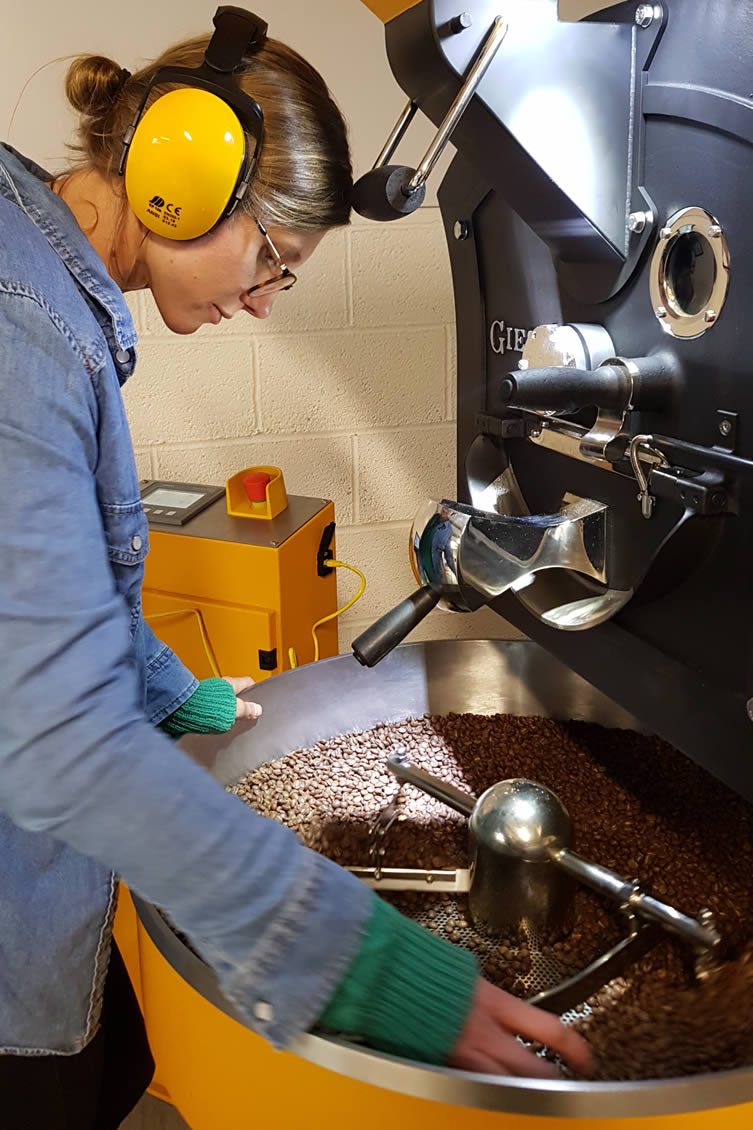 After designing the logotype itself, Ben and I started to consider how artwork could be a part of the brand, Girls Who Grind Coffee had already been invited to launch our debut roast at Festifeel and looked back to the previous year’s event, for which Ben had created an art print sold by Coppafeel. 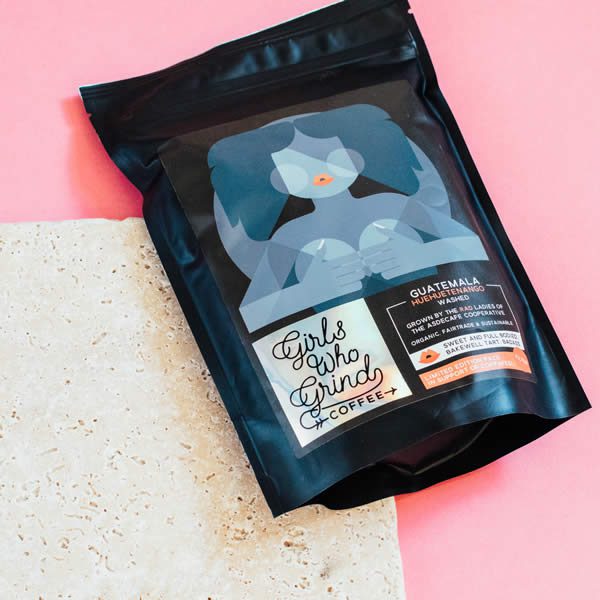 Ben’s sold-out print featured an army of women and we decided to play with that; to take one female character (in the same style as the print) and make her front and centre on the packaging for our debut roast. The pack design was a great success, and we followed through by developing more female characters for the next pack designs.

It’s a great process, starting with Casey and I cupping our coffees in the roastery, deciding on tasting notes, then taking that information and putting it into words—from flavours to personality—which leads to an idea of a representational female character; which Ben and I then created together.

Are there other artisanal businesses like yourselves that we should be aware of?

We feel that 2018 is going to be incredible for women coming to the forefront and creating businesses that are empowering to others. Some of our favourite creative women-led businesses are Granola For Gangsters, headed up by two awesome ladies (with which we are hoping to collaborate with some time in the very near future); Bubble Wafflery, run by our local friend Jenny who brings Hong Kong-style bubble waffles to the West Country; and one of our favourite ceramicists, Lilly of Mäe Ceramics, based in London, who creates the most perfect coffee drinking vessels imaginable.