“Souvenir” has become something of a derogatory term in the modern era of tourism, bringing to mind cheap, mass-produced trinkets based on cultural clichés. Churned out for visitors who have a few foreign banknotes in their pockets that must be spent before the end of the holiday, these mugs, keyrings, t-shirts and statuettes may represent the lion’s share of the souvenir trade, but they don’t accurately reflect the quality of the designers and makers within a given country. 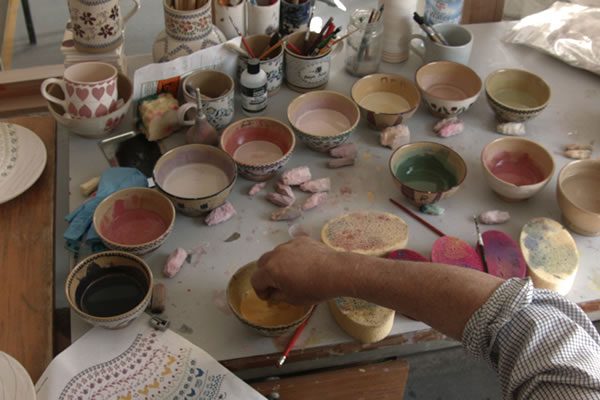 Irish Design 2015 wanted to showcase more of its country’s many talented artisans by commissioning The Souvenir Project, an initiative which ran at this year’s London Design Festival. Curated by Jonathan Legge, Makers & Brothers, the project provided a platform for over 20 Irish designers and makers to redefine the contemporary souvenir, without a shamrock or leprechaun in sight.

Among the works created for the event was animator Johnny Kelly’s reinterpretation of Nicholas Mosse’s classic spongeware pottery design, which incorporated a rainbow colourisation to mark Ireland’s recent referendum on same-sex marriage. Another decorative yet practical souvenir was created by architect Tom dePoar, who designed an portable version of the ancient Irish board game Brandubh using compressed peat pieces fashioned by Hill Picket Studio. 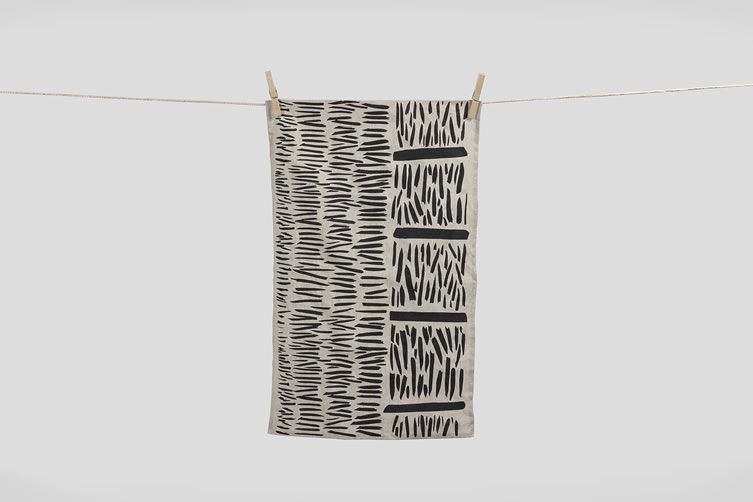 “Stone Wall Patterns is a collection of prints inspired by the dry stone walls of Ireland. Seemingly haphazard yet structurally sound, the dry stone wall holds its form without mortar. The expressive character of the wall describes the underlying geology of the area. Distinctive patterns emerge as you journey through the countryside. This collection of patterns (Aran, Burren and Connemara) has been developed by hand, through loose ink brush drawing and relief block print methods before screen printing on natural Irish linen.” 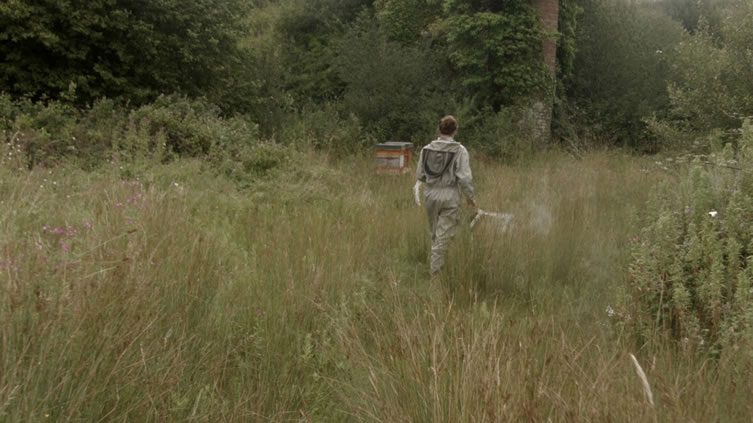 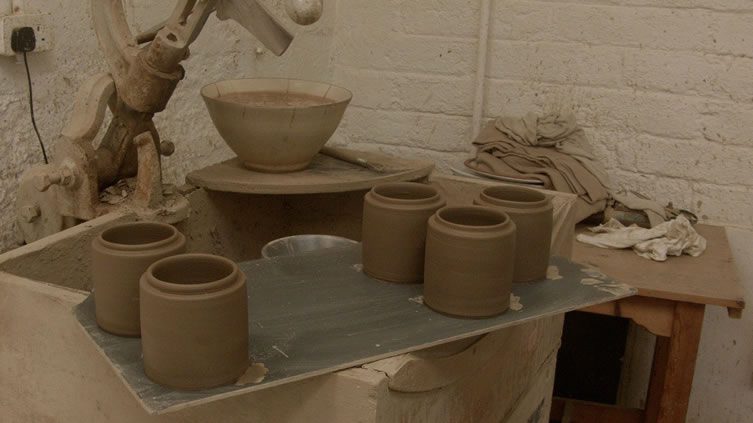 “One field, the source of both the clay for the pot and the raw honey that it holds. Good food is very much related to the land and as such to memory of place. This honey pot is about one very specific place – a field in East Cork. The pot contains raw honey created on the banks of the Blackwater. Clay was sourced next to the hives. That same clay was formed and fired a few miles down the road from this field and the raw honey sealed inside with the wax created in the production of that same honey. A vessel containing all one field in Cork has to offer”

Related Story: Blow your baggage allowance at the Melbourne souvenir shop with a difference… 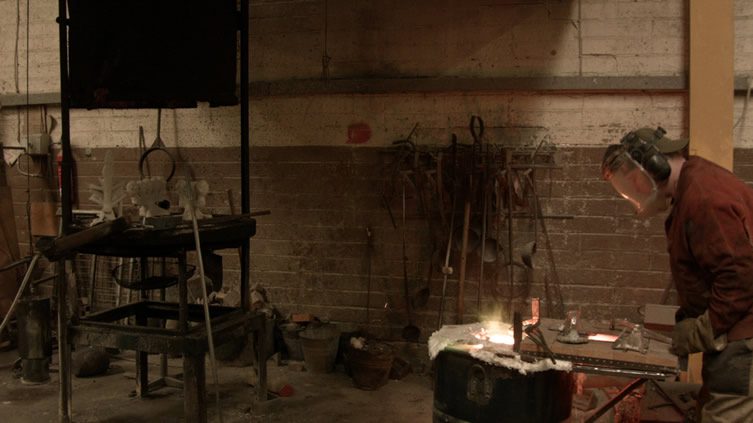 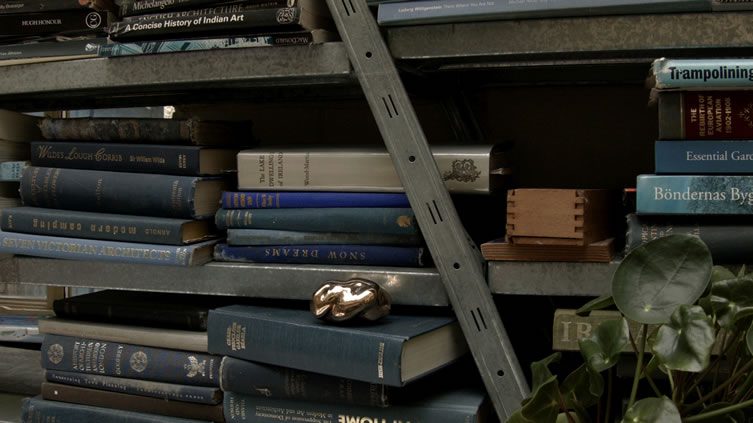 LUMPER
Designed by Makers & Brothers
Made by Bronze Art Foundry

“The hidden and humble root vegetable introduced to Europe in the 16th Century that has since become uniquely associated with Ireland. The hardy tuber has a deep and emotive narrative. The Lumper, once the most prevalent food source in Ireland, is now grown on only one farm. An oddity in bronze, Lumper is a memento with a wonderfully curious form and is presented with an essay by celebrated Irish chef Darina Allen.” 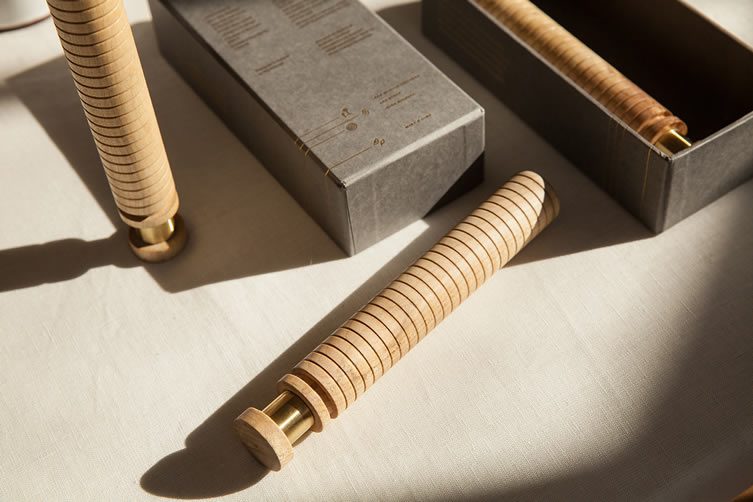 “Measc Muddle is an Irish sycamore and brushed brass cocktail muddle, inspired by the layered landscape of west Galway. The muddle is the result of a collaboration between design studio WorkGroup, Shane Holland and America Village Apothecary. It has been designed to work beautifully for any drink where ingredients need to be crushed, pounded or ground in the glass. Measc Muddle is a specially created tool, designed so that the markings on the shaft can be used to make an Irish red clover, bog myrtle and Irish whiskey cocktail: the Móin Bhuí.” 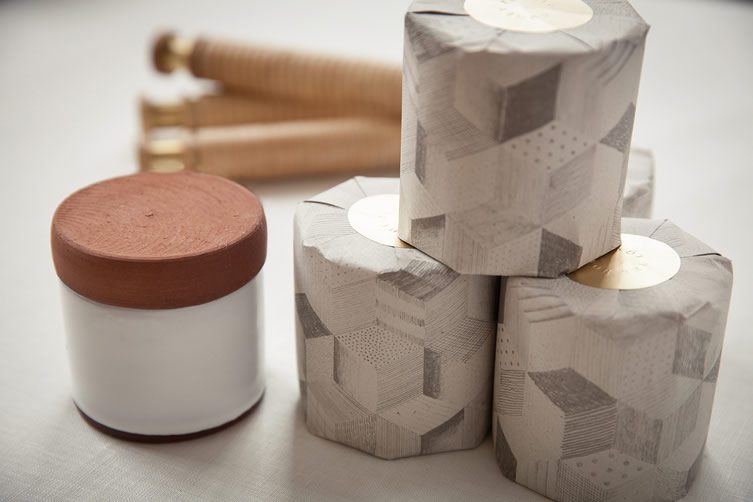 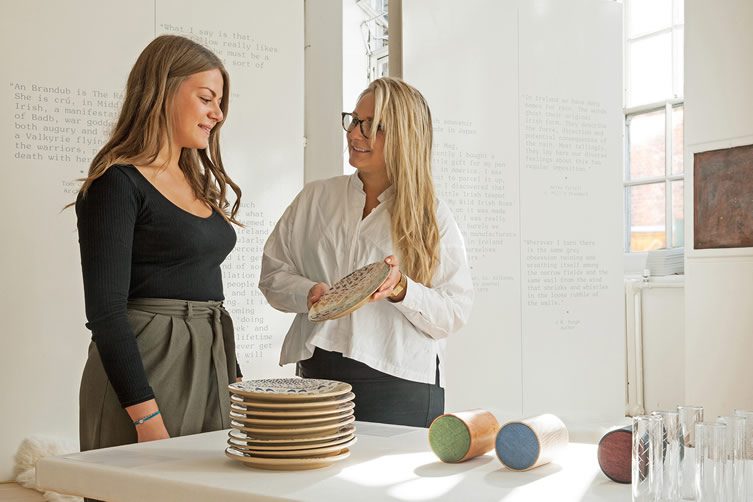 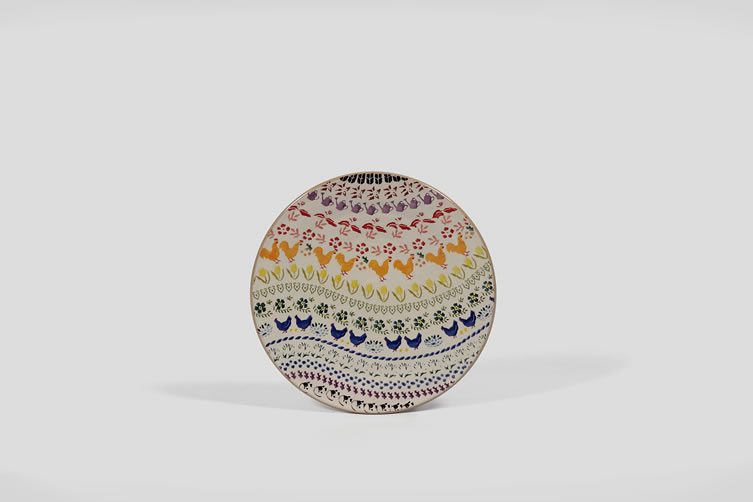 “This plate is the result of a collaboration between Nicholas Mosse Pottery and animator Johnny Kelly, commemorating the legalisation of same-sex marriage in Ireland on the 22nd of May 2015. Inspired by the pottery’s extensive back catalogue of designs and colour, the resulting rainbow pattern is reconstructed entirely from this archive of motifs, including elements dating back to the 1970s when Nicholas Mosse Pottery was established. This souvenir is a small celebration for a big moment in Ireland’s history, a gently waving flag for equality. 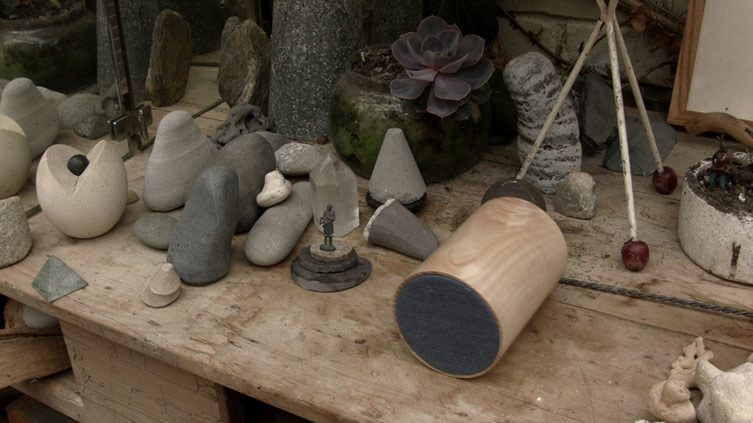 “ibi is a precious and personal object – a souvenir – that allows an individual, through a simple gesture, to be immediately transported back to a time, a place and a feeling. Special memories are collected during a lifetime, forming an intimate record of how we experience the world. Objects, images and sounds trigger them. Small things that are completely meaningless to others have a heightened resonance for the individual. Crafted from native Irish hardwoods and Wexford linen, each ibi contains a personal memory. Rotate gently and listen.” 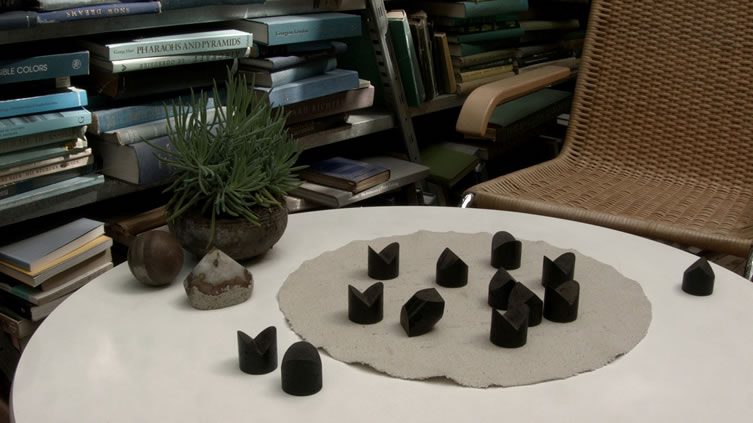 “An brandub is the board game mentioned since the sixth century in Irish texts. The old game of ground is presented here as a section of peat, compressed and cut into thirteen figures, played on a punctured wool felt mat. An brandub, the raven, is perched at the centre of the board, outnumbered and surrounded, and plays for stalemate – an island game. “The centre of the plain of Fal is Tara’s castle, delightful hill; out in the exact centre of the plain, like a mark on a brandub board. Advance thither, it will be a profitable step: leap up on that square, which is fitting for the branán, the board is fittingly thine.” – Attributed to Maoil Eoin Mac Raith” 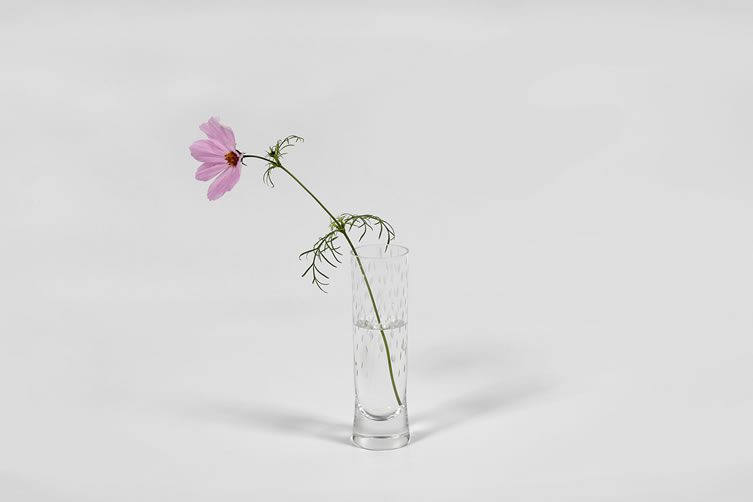 “In Ireland we have many names for rain. The words ghost their original Irish form. They describe the force, direction and potential consequences of the rain. Most tellingly, they lay bare our diverse feelings about this too regular imposition: A soft day brings steel grey cloud which wipes out the landscape and dulls all feeling; Spitting; a mild inconvenience allowing the suffering to weave between the drops. It’s absolutely Lashing; rain bounces off the ground and unleashes a torrent of dialogue, aghast at the state of the weather.

Elements speak of nature and landscape and our interpretation of them says a lot about us. Rain can be symbolic of melancholy, passion, wistfulness and creativity. It lends the Irish land its verdant greenness and its water and fire colour palette. J.HILL’s Standard produces hand made contemporary crystal in Waterford, Ireland, cut with precision by craftsmen who use age-old knowledge and skill. The physical nature of rain is especially satisfying to interpret in cuts on crystal. J. HILL’s Standard have used a series of different cutting techniques to achieve the effect of imagery created for them by Graphic Designer Scott Burnett.” 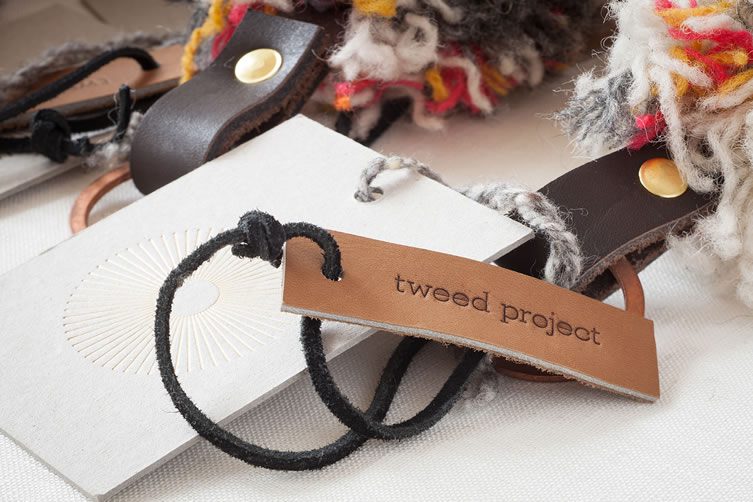 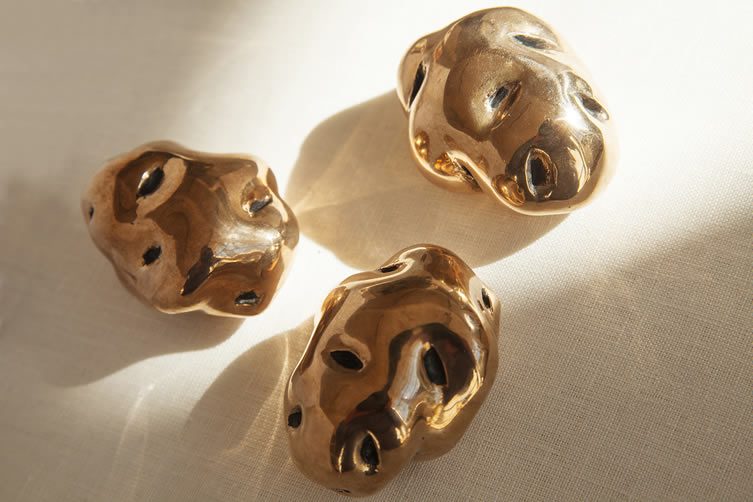 LUMPER
Designed by Makers & Brothers
Made by Bronze Art Foundry