Simone McEwan is a designer with an impressive CV. A trained architect, McEwan’s career has seen her leave in-house practices and venture into the world of consultancy. Launching her own design studio in 2012, previous accolades include Concept Designer at Selfridges and Design Director at Soho House. Having worked globally, the ex-Aussie is in serious demand for her vision, concept and insight across hospitality, leisure and retail. Shortlisted for a WIN Award for The Olympic Studios just last year, I’m not quite sure how she managed to find the time to speak to us about her latest project, The Horseshoe in Hampstead, London.

I met Simone on site, and first impressions were eminent. The newly redesigned Horseshoe brew house — owned by Camden Town Brewery founder Jasper Cuppaidge — is a breath of fresh, fun air with hints of graphic colour set to a modern, textured space. One of the first elements to capture the eye is the horizontal row of immaculate beers taps; linear, multiple and set off with vertical grey tiles. The wooden kitchen front breaks the space into two zones, with a fast casual front and more relaxed, cosy back — two distinct atmospheres for the price of one. Thanks to an abundance of natural light via large original windows, two codependent settings exist. A lot of pub refurbs tend to (with mixed results) painstakingly strip a space back to its former glory. On the contrary, The Horseshoe does almost the opposite. I love the modern approach with playful touches reminiscent of a proper brew house — the space embraces texture too, brick to wood; tile to metal; with hints of graphic colour on the taps and teapots, and bold typography in the signage.

Subtle yet bold; soft yet linear, there’s plenty for the eyes as well as the palate. I sat down with Simone for a chat about inspiration, the Hampstead community and the project’s design considerations — getting to the bottom of her design ethos. 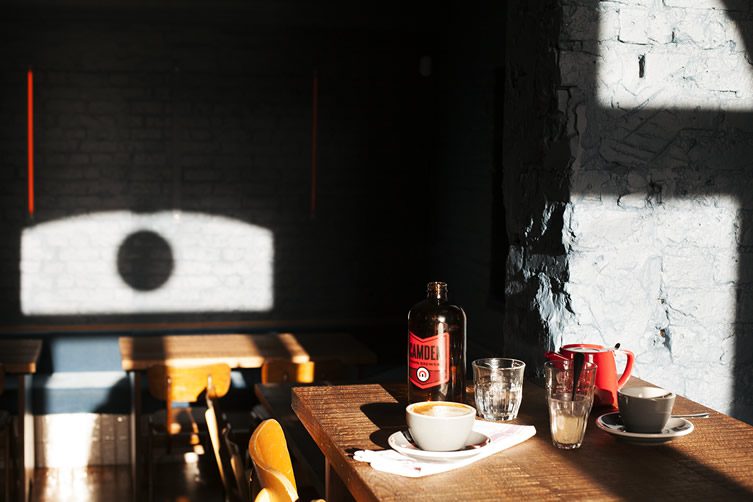 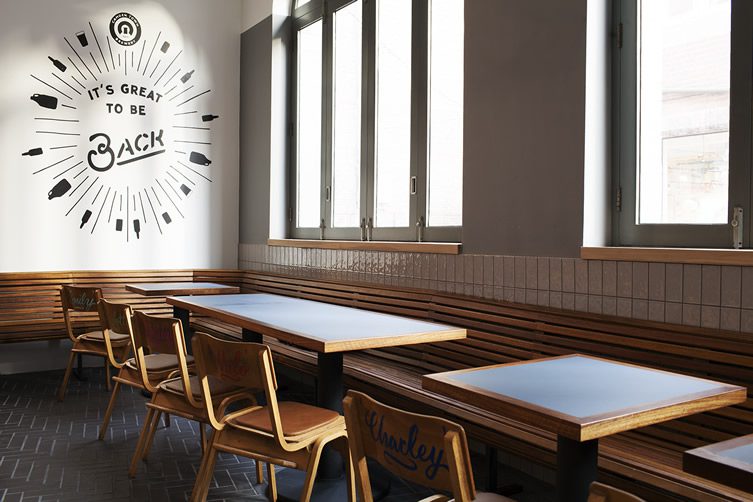 How did The Horseshoe brew-house project come about?

My husband introduced Jasper Cuppaidge and I. He is the owner of the Camden Brewery, a fellow Aussie like me, who’s owned the Horseshoe for some time. It was in this very cellar that he started brewing Camden Brewery beer. So in a way, The Horseshoe is his little baby and he wanted to refit it to resemble a proper brew house.

Tell us about the concept…

We developed the concept together; his brief was simply ‘beer, maintenance and durability’. The pub used to get trashed at the weekends; it was one of the only drinking dens in Hampstead so Jasper wanted it weekend-proof. He wanted real materials too, with surfaces that could be washed down. I’d never had that before! To be asked to design something that could be “washed down by a hose!” [laughs].

I quite like this brief because I could work with raw materials. The Horseshoe floor was great, because I got to use original clay tiles in the herringbone style — which softens the design and is reminiscent of an old pub floor. Japser also wanted to keep the memories of the previous Horseshoe, so we kept the old chairs. What’s lovely about them is that the names on the back were painted on every time one of Jasper’s friends had a baby. That was a huge part of The Horseshoe story, which we wanted to keep.

We also didn’t want it to look too branded, so the Camden Brewery heritage lies under the surface with the new design. The entire concept was essentially inspired by the beer and raw materials. Jasper also loves wood; he would have had the whole space covered in it if he could. But I wanted surfaces that could be bashed up. I didn’t want to use a material that would be too precious. The kitchen front is made up of Iroko wood lab worktops that we found in school sales. I wanted something that had already aged naturally rather than something that looked new. The colours in particular are great; there is a lot of movement in the tones, which I love. 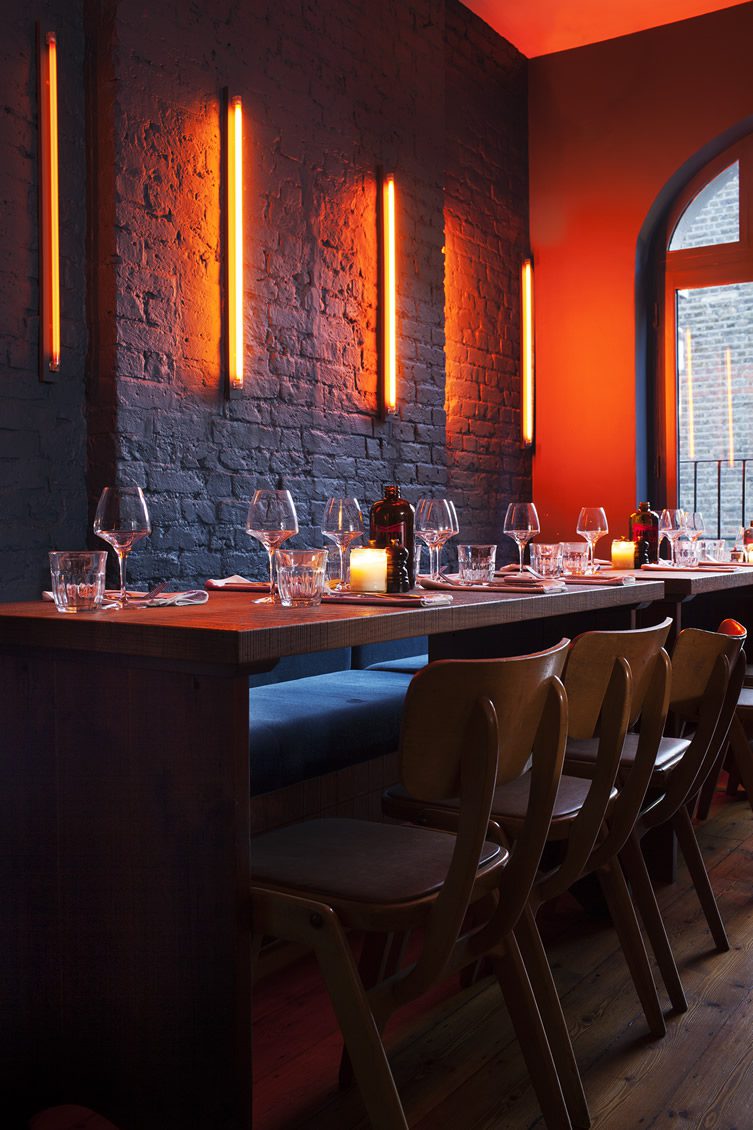 How do you begin your projects, what is the first design consideration that springs to mind?

My main design consideration is to always think of the customer first. What is it that the customer is going to want? So with this project, reining it in a bit was as important as the journey and the context of the space.

What are you favourite design aspects of The Horseshoe project?

As a reference point, Jasper travels a lot, especially to the States where the craft beer thing is in full bloom. He loves what is happening in New York in terms of the environment and how craft beer is presented. The taps were a nod to that and I wanted them to look very graphic, and to stand out. I actually love this project as a whole, everything came together so I can’t pick just one aspect.

What is it about The Horseshoe that is unique? How influenced by the locale were you with the design?

I was very keen to keep this building as much ‘Hampstead’ as possible. I didn’t want it to be too ‘new’, too ‘Camden’ or even ‘Dalston’. Contextually that would not have worked. We really didn’t want to scare the customer. Jasper has a really loyal following and we didn’t want to make the design too exclusive for a certain crowd. The new Horseshoe still feels like the original Horseshoe. Hamsptead has a wide age market, and we wanted everyone to feel welcome. We described the drinking community here as ‘young in mind’ which was part of the brief. 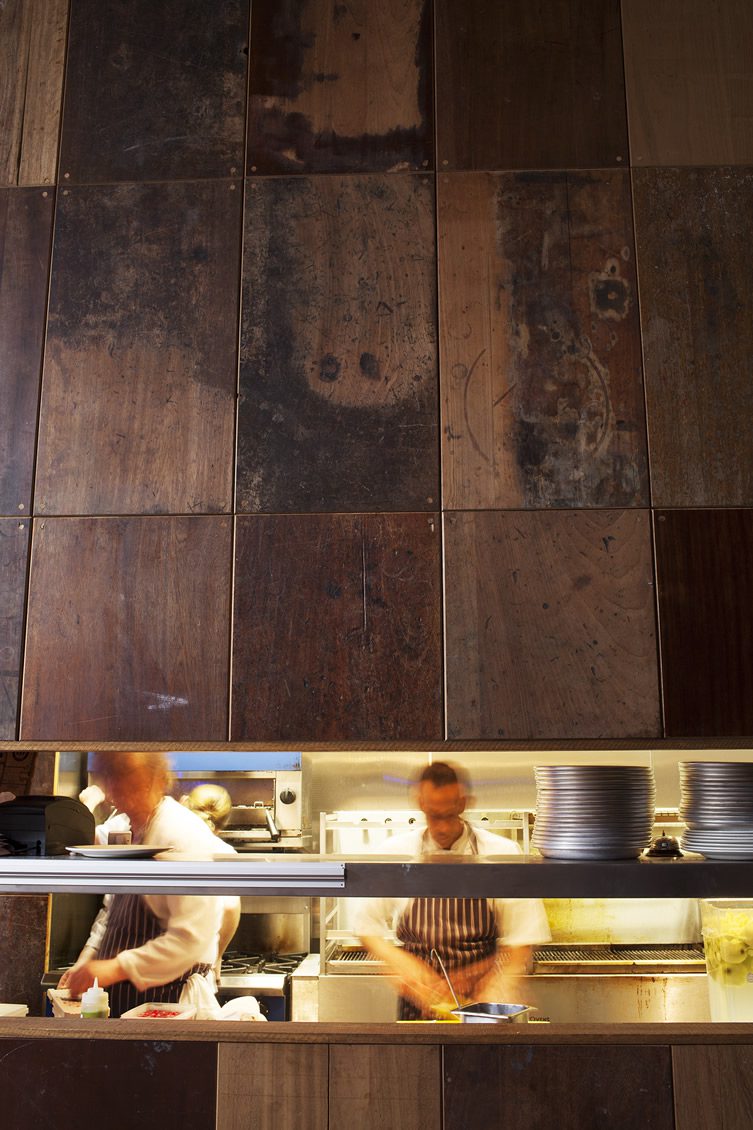 Were there any aspects of the structure that you wanted to highlight or keep?

In the previous rendition, The Horseshoe was completely stripped back. So there wasn’t much to keep. It was literally a timber floor and white walls and previous to that another pub, so over the years the space had been stripped back of all its original integrity. Apart from the windows and the brick wall at the back we didn’t have a lot to work with, we had to create a new identity. So to find the balance between reinstating a sense of architecture, with the new F&B offer and which all sat contextually within a very local ‘village’ community – that was the challenge! How to hold on to the essence and soul of The Horseshoe, but to create something new without it feeling out of place in Hampstead.

Don’t hate us for this completely unoriginal question, but we need to know, who inspires you?

Architects who have a strong materiality largely influence me – people like Carlo Scarpa; Gio Ponti; Adolf Loos; also Vincent van Dysen and Joseph Dirand. I hugely admire and have so much love for Ilse Crawford of Studioilse. I learned so much from her design philosophy, and what she does is beautiful and poetic with an element of intelligence that isn’t just about style or aesthetic.

Artists I admire include Cerith Wynn Evans; Jorge Pardo and Milton Avery. But the list is very long — inspiration is everywhere from photography to ceramics…

What are you working on now?

The next space for Jasper will be the Camden Town Brewery Brew House in Kentish Town. Also I am working on a new members club in Pall Mall that is all about wine. The project is very much high end and luxe, and is a beautiful project to work on. The gorgeous architecture is where I took a lot of inspiration from. I’ll tell you all about it when it’s finished! I’m also working on two houses in Ibiza and some consultancy work, but I love designing for hospitality! 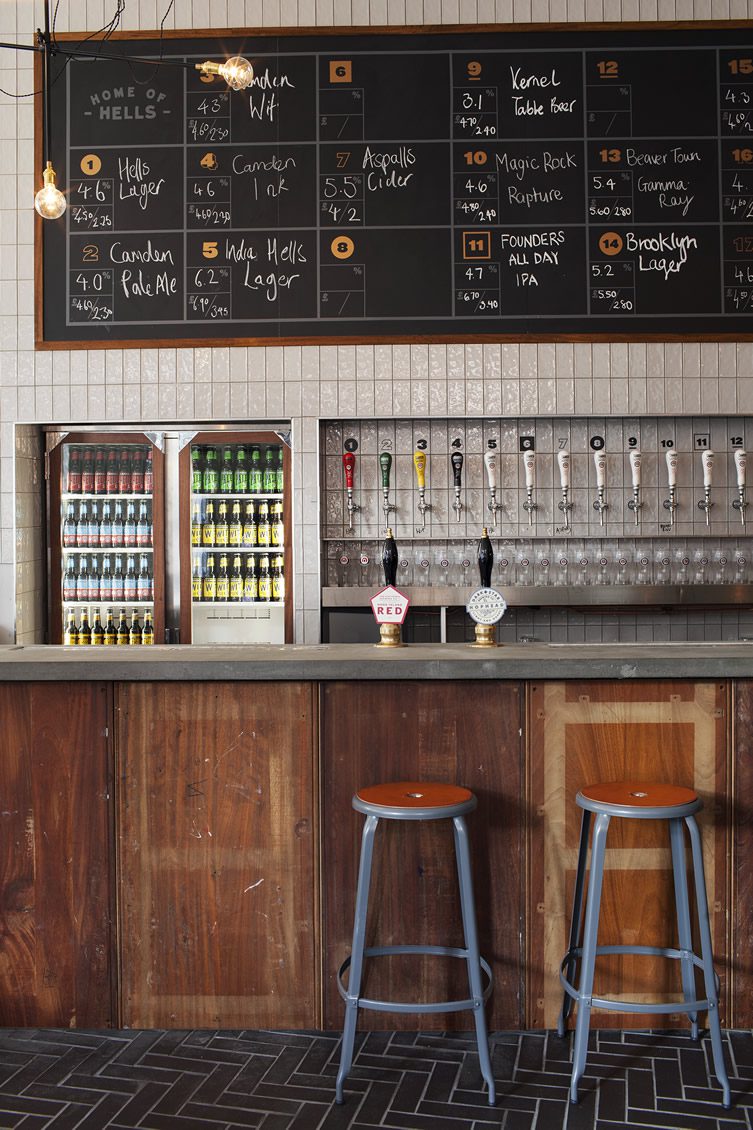 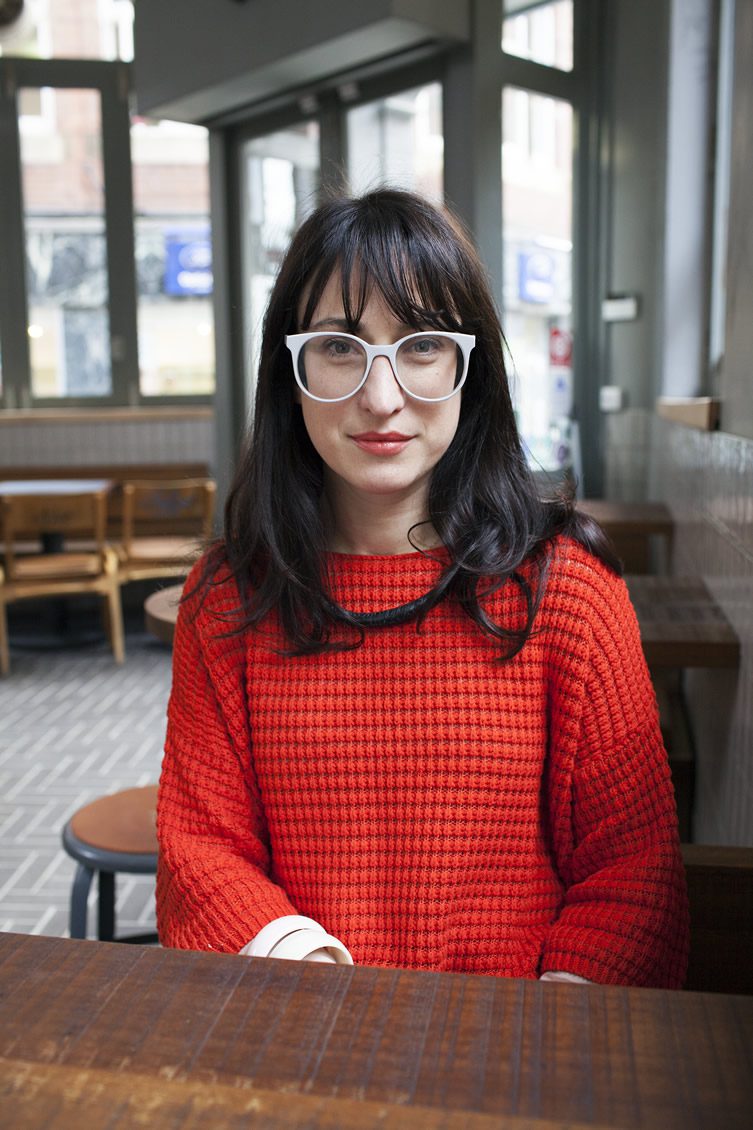 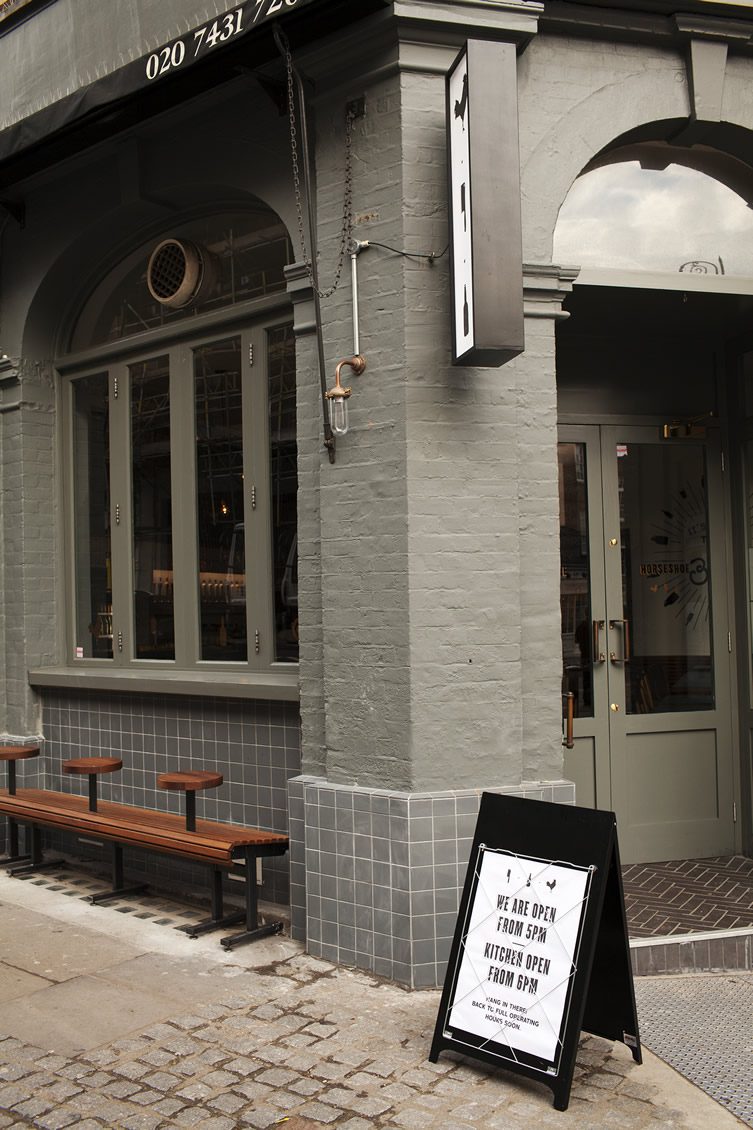