Before binge-watching, before the blockbuster, before Technicolor, James Cagney and Greta Garbo; the largest showbiz industry that the world had seen would roll into town with a cast of thousands, literal tonnes of freight, and attract audiences of up to 14,000 per show. The Greatest Show on Earth brought with it veritable super-heroes, daredevils prepared to risk their life each night in the name of entertainment, oddities from the world over, and dreams. The circus was king, and the Ringling brothers were the kings of circus. 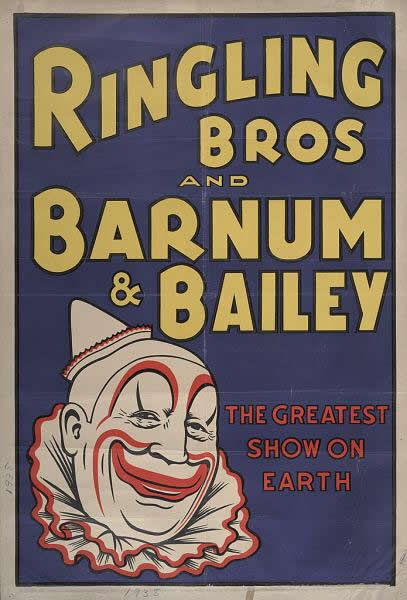 The Ringlings had purchased Barnum & Bailey’s circus in 1907, and brought it together with their own successful show in 1919; the Ringling Bros. and Barnum & Bailey Combined Shows would be a record-breaking Goliath the likes of which had never been seen before. The height of the entertainment industry in its day, these gargantuan shows would eventually be superseded by Hollywood and television, but not before it had made its owners very rich indeed.

One of seven Ringling brothers (and one of the five who had merged the biggest names in entertainment), John Nicholas Ringling and his wife Mable had been spending their winters in warmer climes; namely Sarasota on Florida’s Gulf Coast. It is here that John and his brother Charles would have significant success in the real estate world.

Already the owner of railroads, oil fields and plenty of property around the U.S., John was one of the world’s richest men, and his money was shaping a sleepy Floridian town. Charles had founded a bank and was loaning money to support local entrepreneurs, John was investing heavily in developments on the keys, and in 1927 the circus would move its headquarters here. The Great Depression of the 1930s would take its toll on the circus and its founders, but not before John and Mable had had a Venetian Gothic mansion — named Cà d’Zan — built on the edge of Sarasota Bay. 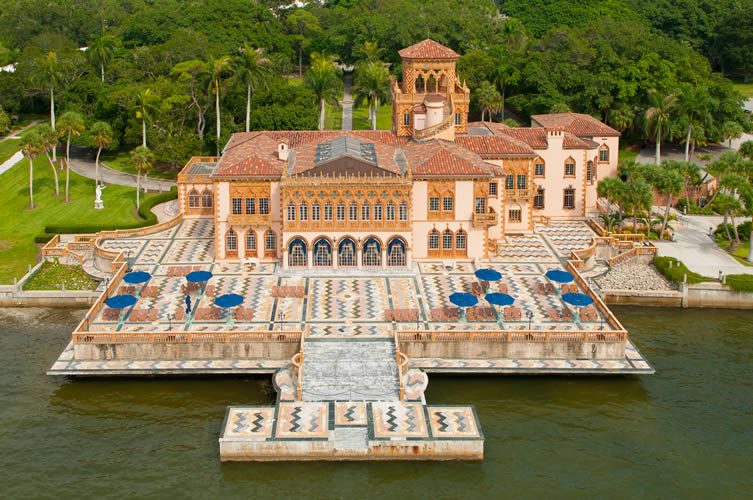 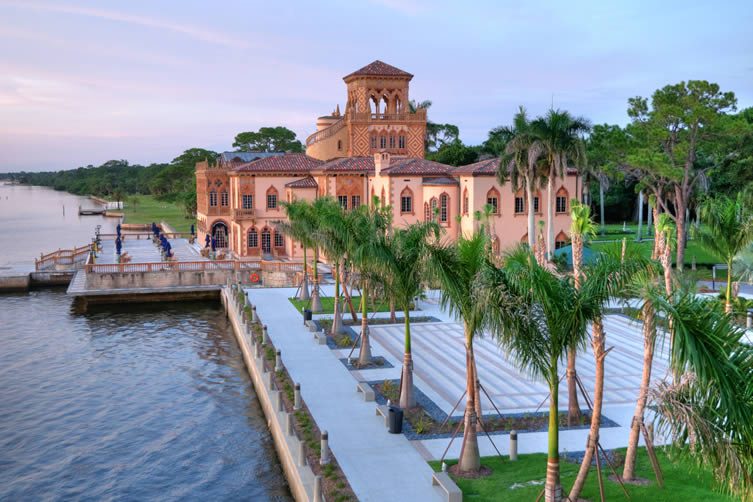 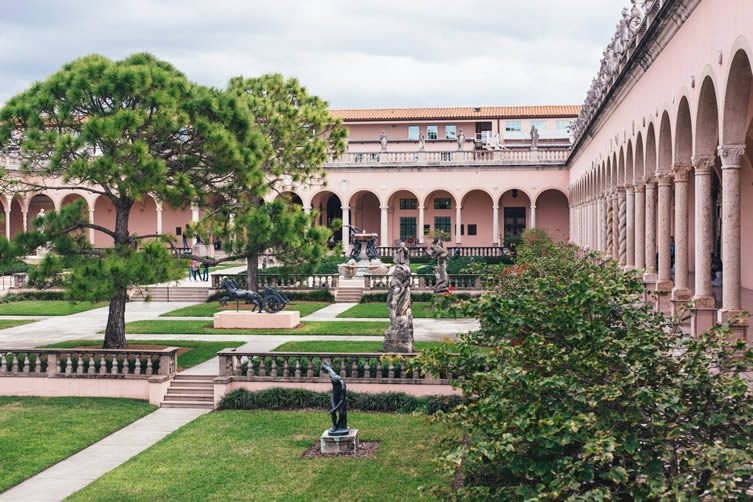 The Ringling Museum of Art © We Heart

The inspiration for the opulent 36,000 sq ft waterfront house is indebted to the Ringlings’ quarter of a century spent acquiring circus acts and art throughout Europe. John had become one the early 20th century’s most prolific collectors of art, and whilst Cà d’Zan was still under construction, Ringling hired architect John H. Phillips in 1925 to design and build a Renaissance-style pink palace with 21 galleries that would host his growing collection. 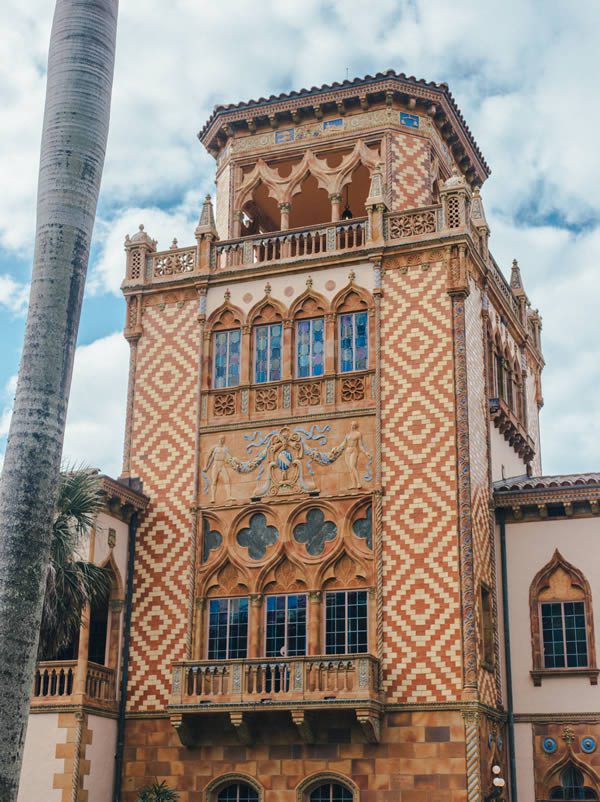 He had hoped that the museum would make Sarasota a cultural centre — and although the Depression would cripple the king of circus, nearly a century on his wishes are fulfilled. Miami may remain Florida’s most famous cultural draw, but Sarasota is a small city with a big heart for the arts.

John went on to die in 1936 with just over $300 in the bank, a Hollywood-esque tale in itself, but the Museum of Art and his Gothic mansion had been bequeathed to the people of Florida in his will; and they now anchor one of the country’s most intriguing cultural destinations. The Ringling Museum of the American Circus was founded on the grounds in 1948, and the institute went on to purchase an 18th-century Italian theatre the year after, moving it (along with all the decorative elements originally built in 1798 by architect Antonio Locateli) to the museum in 1952, before reopening in a newly-constructed building in 1958.

The site was not the draw it is today, though. Maintained badly, The Ringling was passed from pillar to post until Florida State University (FSU) took control at the turn of the 21st century. Many many millions were spent restoring the buildings to their original glory, and a new centre for Asian art opened just last year; designed by architect Machado Silvetti, its façade comprises 3,000 deep green, glazed terracotta tiles — paying homage to the elaborate detailing of Cà d’Zan, a striking contemporary beacon in its own right. 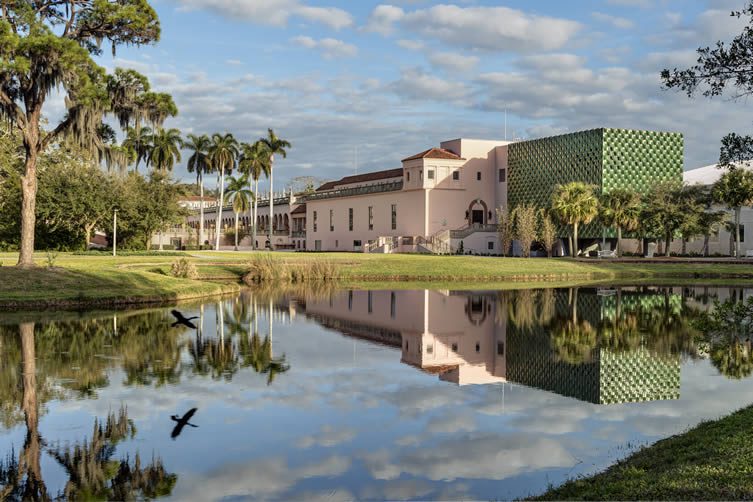 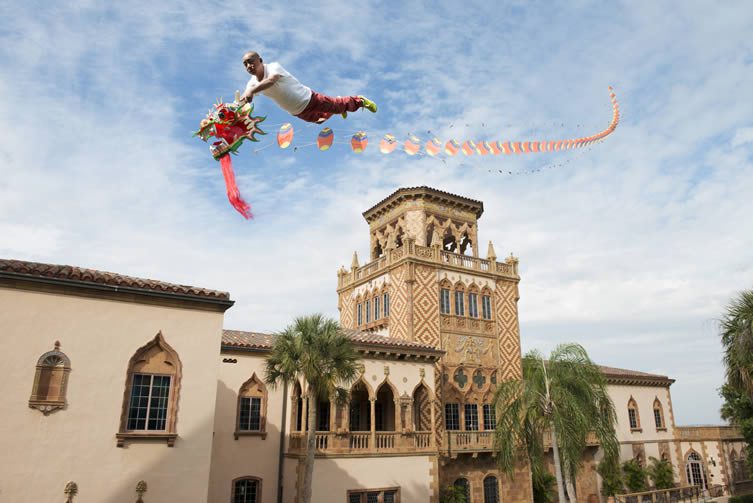 Li Wei, To Fly. Courtesy, The Ringling Museum of Art 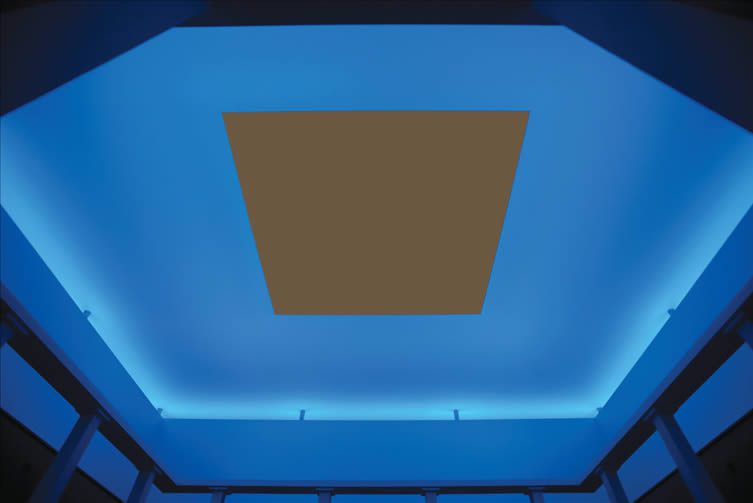 Expanding on the first acquisitions made by John and Mable themselves, The Ringling’s Asian art collection now spans ancient antiquities to contemporary works from artists like Beijing’s gravity-defying Li Wei; whose series created onsite was part of 2014 exhibition Seeing the Unseen. Groundbreaking artist James Turrell’s Skyspace Joseph’s Coat is another example of the museum’s commitment to contemporary art. 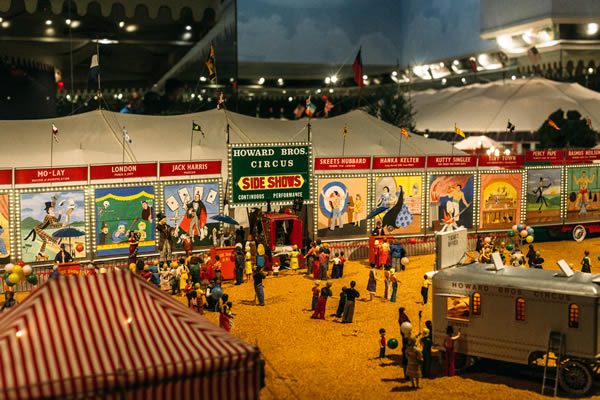 The museum and Cà d’Zan are set on expansive waterfront grounds, and the Ringlings’ fascination with Baroque and Renaissance period Europe can easily transport your mind across the Atlantic. The romance of the American dream is never far, mind, and we spend nearly as much time lost in the fanciful Circus Museum — its centrepiece is a 3,800 sq ft model recreation of the combined shows in their heyday; 44,000 individual pieces visualising the enormity of the operation.

The sheer scale of the travelling circus in its Golden Age is hard to imagine for someone of the computer game generation, and you don’t need to be a child or a trainspotter to lose yourself in this scale model. Countless cargo trains, thousands of workers, hundreds of animals, performers and oddities; its creator, Howard C. Tibbals, began working on the model 1956 and, although much of its was completed by the mid-1970s, it did not see the light of day until the 1982 World Fair in Knoxville, TN. Tibbals’s mammoth replica took over a year to set up when it arrived at its spiritual home in 2004. 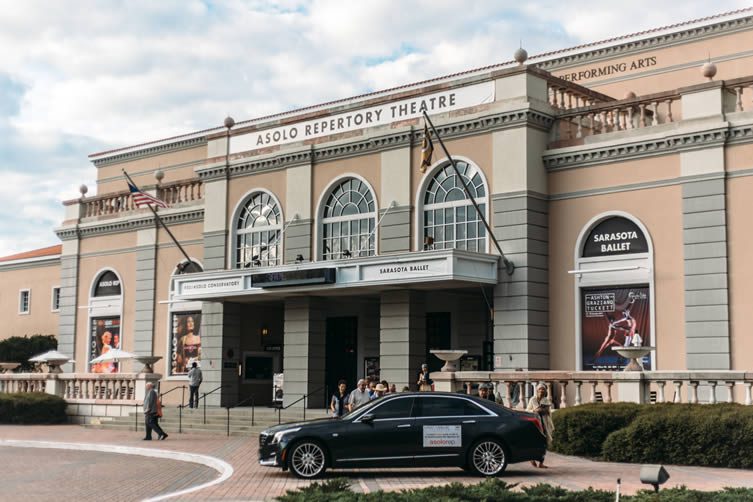 The Greatest Show on Earth is inescapable, the story and heritage synonymous with the Ringlings’ impact on Sarasota; yet John and Mable’s desire to leave behind a cultural legacy remains tangible. It may have taken some time to evolve into what it is today, but this is a place of huge importance for the area. For the United States at large. The Ringling offers talks and walks; lectures and workshops within the stunning Bayfront Gardens; cocktail nights on the lawn, and the Ringling International Arts Festival each October; there are community projects, book clubs and study days; family festivals and initiatives to inspire creativity among the young. The site is also home to Florida’s largest Equity theatre (and the Southeastern United States’s largest Repertory theatre), the Asolo Rep. 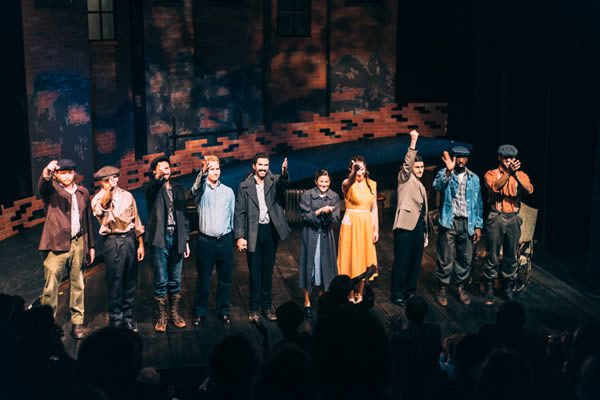 The cast of A View From The Bridge © We Heart

Housing the FSU/Asolo Conservatory for Actor Training — a three-year graduate programme that culminates in a Master of Fine Arts degree — the multi-theatre complex leans on the heritage of the Historic Asolo Theatre (which now occupies a different location), but demonstrates the importance that FSU have placed upon fostering the arts here since they took it over. We take in an excellent performance of Arthur Miller’s tragic A View From The Bridge, which showcases the young talent the programme is producing; it’s a fine way to embrace the commitment to the arts that John Ringling had imagined a century ago.

And they’re not done. Oh no. 5,500 sq ft expansion The Kotler-Coville Glass Pavilion is underway, another contemporary addition, this time at the hands of Tallahassee’s Lewis + Whitlock Architects. The new wing will home the museum’s growing collection of European and American contemporary glass work; its glass façades ensuring that The Ringling’s newest building stays true to its cause. Funded by philanthropic families the Kotlers and the Covilles, the new centre will embody the altruistic spirit the complex was founded upon. From the peak of show-business to one of the country’s most significant cultural institutions, John Ringling’s American dream is alive and well. You won’t believe your eyes. 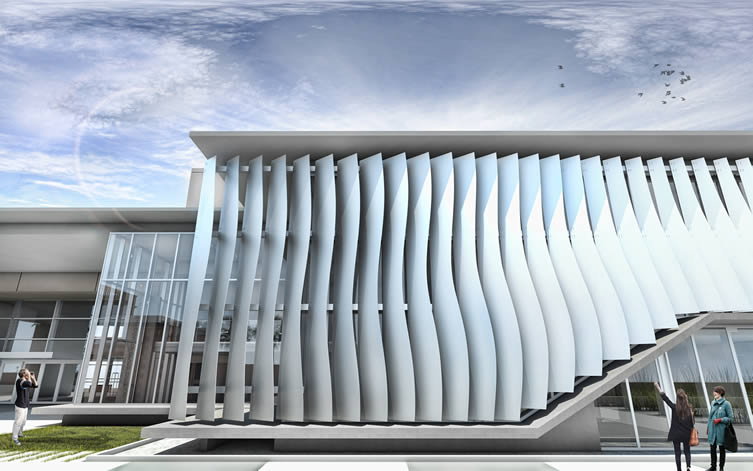 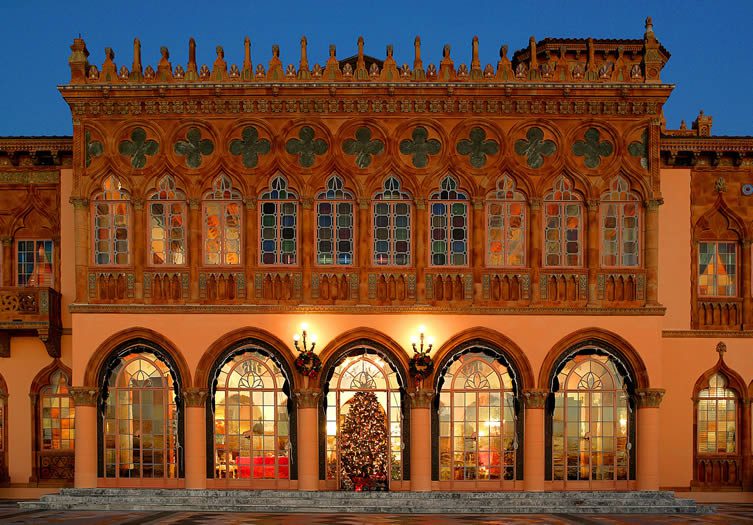 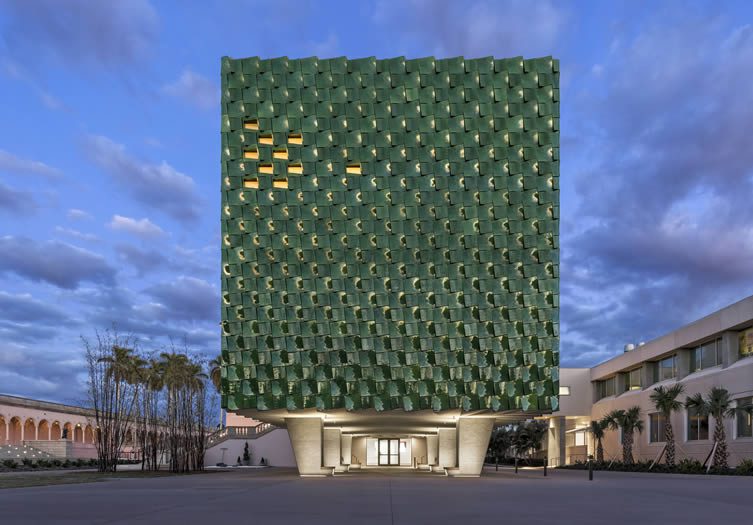 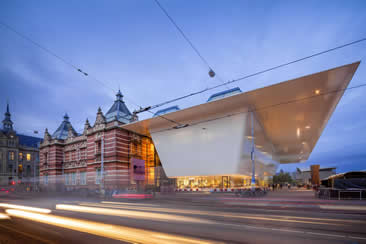 There's a lot more than meets the eye to PARIS TEXAS antwerp. The project known as the event space, located in the once unsavoury old Sailor’s Quarter of Antwerp and close to the impressive Museum Aan de Stroom, has seen much regeneration of late....