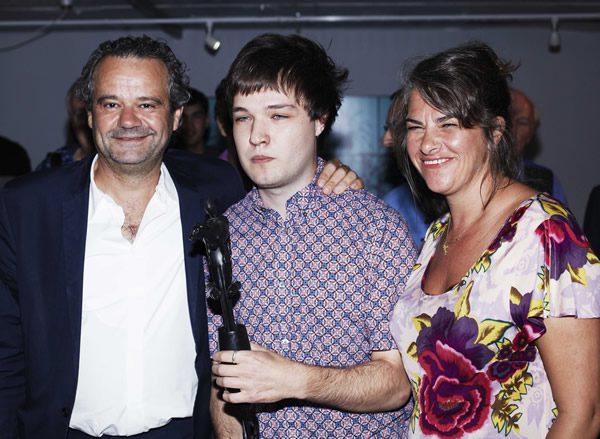 The 23-year-old artist’s youthfulness contributes to the impression, and fittingly he tells me that his art is firmly rooted in childhood — specifically in the sense of alienation so common to those years, at least in the artistically-minded. ‘I think what I take from my childhood,’ he says, ‘is the memories of vulnerability and my difficulties with socialising and at times feeling isolated.’

That won’t come as a surprise to anyone familiar with Treadwell’s work. His paintings are minimalistic cartoons in which childish figures, their features mostly quizzical blanks, experience traumas that range from the quotidian (one unsuspecting figure has their trousers removed from behind by a similarly blank-faced trickster) to the existential (one seems to be either wrestling with or hiding behind some vague, undefined presence). The latter example is a good one, its ambiguity emphasised by the rippled distortion that appears to threaten the very outline of the protagonist. This is a world where small storm clouds manifest in domestic spaces and spit out little arrows of lightning. 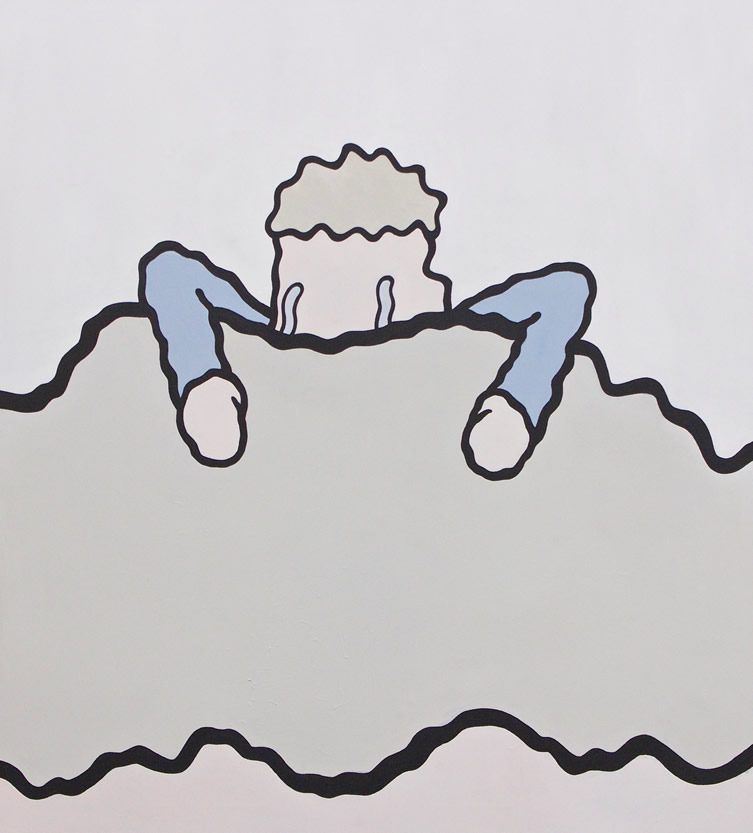 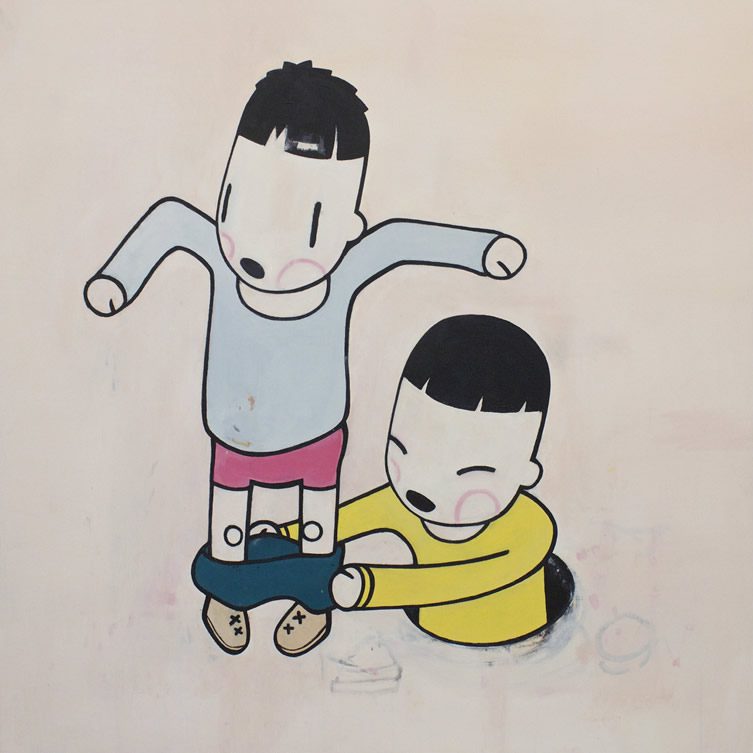 The aesthetic is unplaceable, but there’s a strong and obvious vein of influence from Japanese comic-making. Treadwell studied for a time at Japan’s Kyoto Seika University, but the influence has deeper roots than that. Again, we’re back in the childhood years.

‘Growing up in the ’90s, my generation was subject to a huge wave of Japanese media in terms of movies, toys, comics and games, which we all became obsessive and crazy about. Since then, I suppose I was always curious about looking outside of the Western world for inspiration, especially where media from another country had such a profound affect on my childhood.’

Over the years, Treadwell’s interest in the art of the modern East continued to adapt, and at university in London inspiration also began to come from some other and quite different directions. 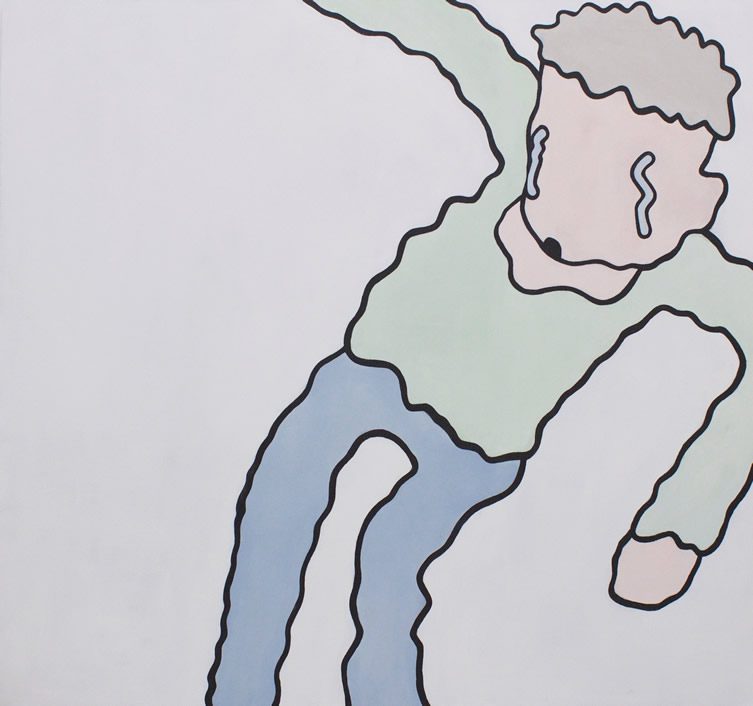 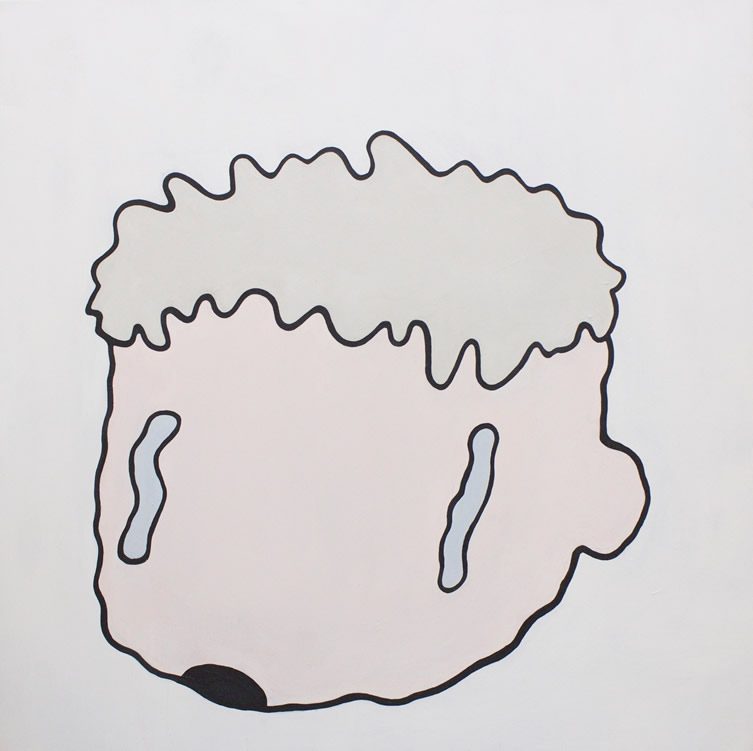 ‘Before going to art school, I was obsessive over reading about contemporary Japanese artists such as Aya Takano, Takashi Murakami and Yoshitomo Nara and wanted to somehow adapt my work to reference them. Their work provoked nostalgic feelings about my youth and identity as a kid, despite not being Japanese. Then, during University, I took a keen interest in mostly American painters such as John Wesley, Philip Guston and Laylah Ali, so I suppose the style I have now is a merging of these two periods in my life.’

Elsewhere, Treadwell has expressed a desire to engage with the peculiar challenges posed to his generation, particularly by internet culture. One painting depicts two artists taking a break from work; one smokes a cigarette, both are looking down at a canvas with ‘What the fuck am I doing???’ scrawled across it. Both the figures seem nonplussed, as if they have had no agency in their own artistic product and as if stunned by the self-referential question they themselves have asked. The painting points to Treadwell’s own uncertainty about the place of both art and artists in the modern world. 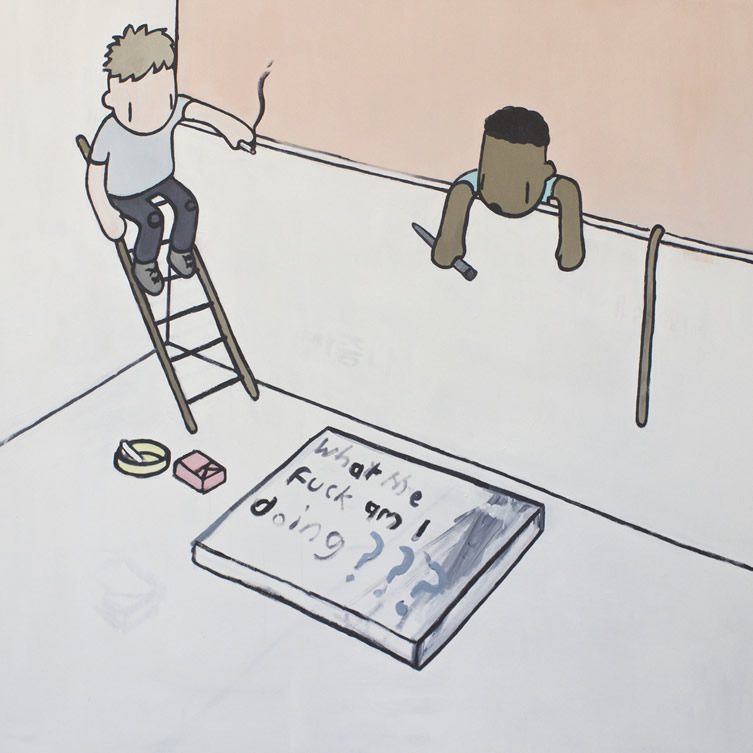 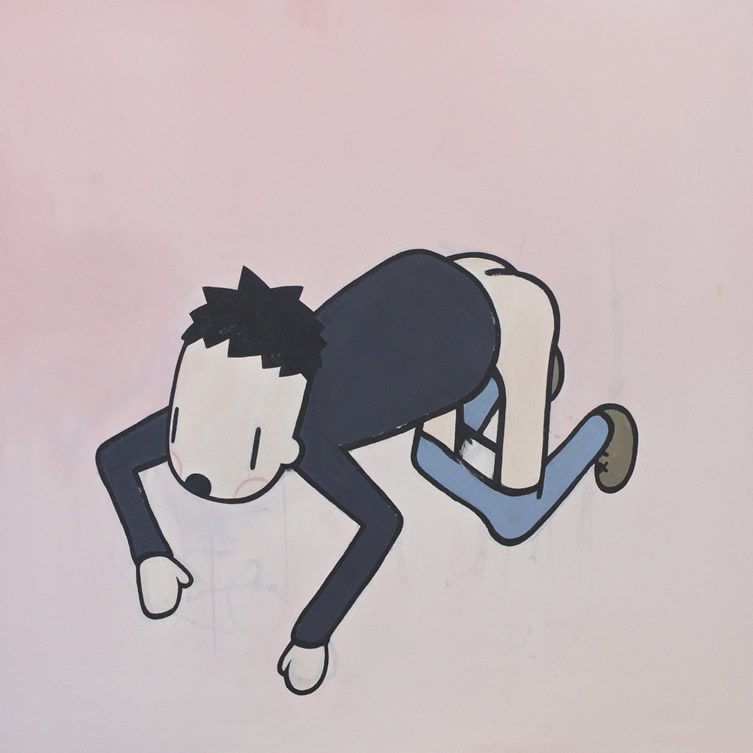 ‘I think in today’s world people expect to be able to access everything quickly and fast. That makes art difficult, particularly on the internet. Things are becoming fast and maybe the art world needs to catch up and adapt to that. I think it has in some ways in recent years, but for contemporary painting, I feel theres a frustration from the general public that it isn’t as accessible as it should be.’ It often feels like his work — in its deceptively throwaway immediacy, its ambiguity, the power it derives from putting disposable characters in unexpected contexts — is a reaction to this.

He’s also expressed some ambivalence about the ubiquity of social media — both in the culture at large and in his own life. Would he say he’s an outlier in being uncomfortable about these sorts of things?

‘I suppose I am in ways,’ he replies. But, ever spotlight-shy, he continues: ‘Then again, a lot of people my age feel the same way, despite being consumed by it.’ 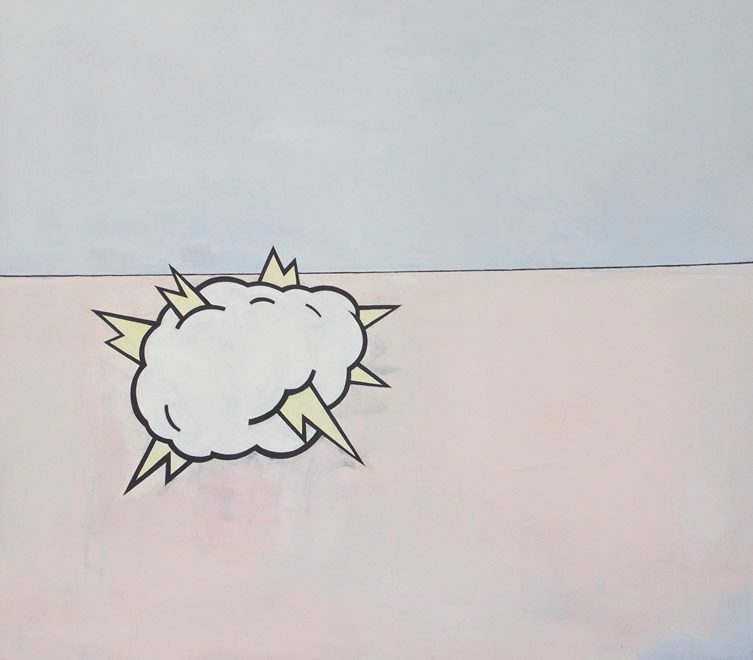 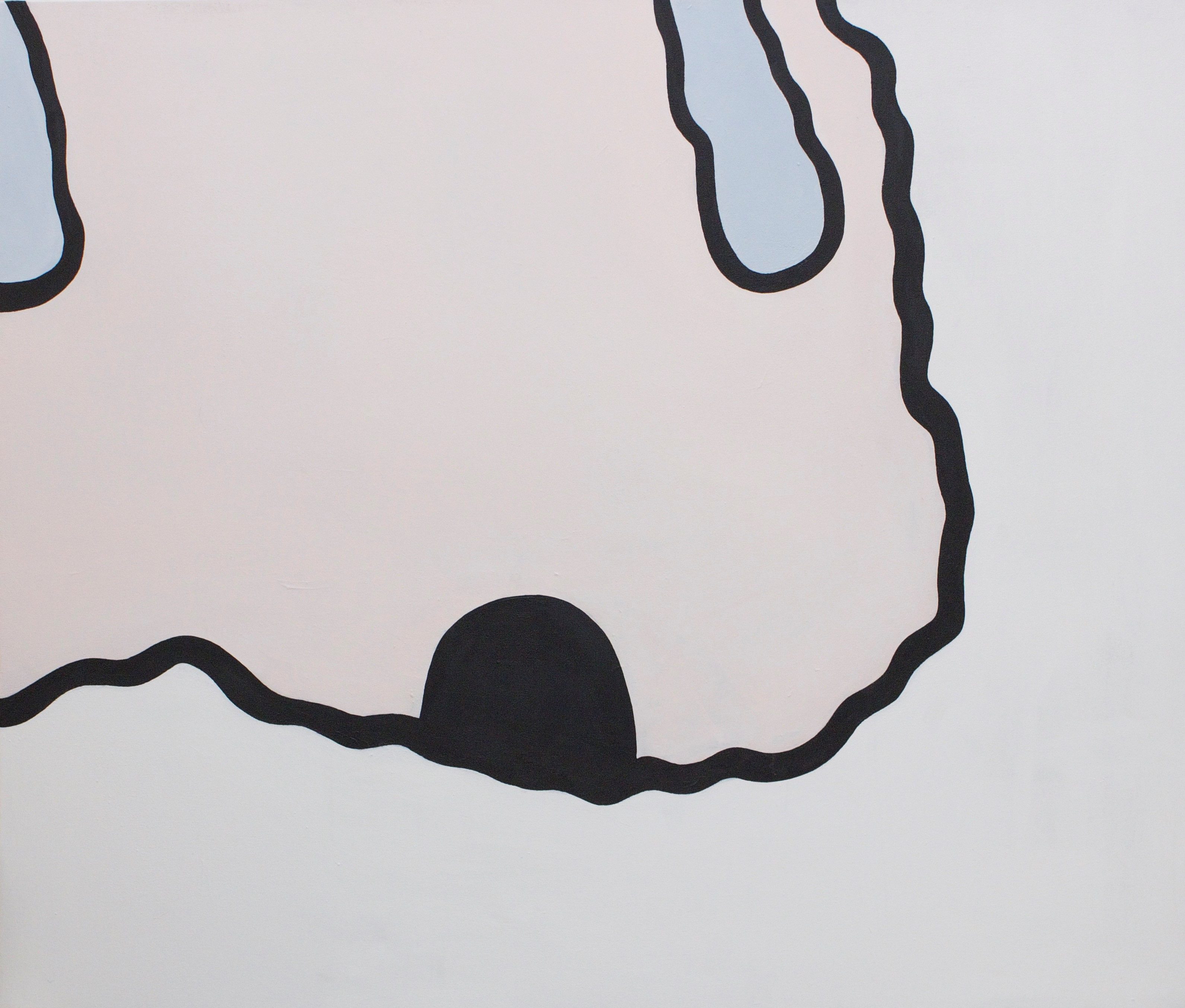 Coming away from Ripple on a Playground, Treadwell’s current show at London’s CNB Gallery, I’m left with a strong feeling of poignant uncertainty. His characters, if you can call them that, seem so helpless — and in their expressionlessness always just on the verge of realising it. Yet there’s optimism, too, or at least very strong empathy. What kind of experience does HE think his art depicts?

‘I like to play in that space, to use questions about whether the characters are enjoying themselves/at peace or if they are actually in distress or uncomfortable to create tension. Personally, actually, I think the main thing is that they always are vulnerable and inferior to the viewer. Toying with those distinctions is probably the most exciting thing and the biggest kick I get out of making my work.’

For all the cultural allusiveness and hip pop-culture cool of the work, there’s a beating heart here and it’s to be found in that sense of danger, of inferiority, of vulnerability. It takes the routine fears and insecurities of childhood and adolescence and by way of three continents’ worth of influences makes them into something striking and poignant. Go see the show. Get a handle on what the fuck Felix Treadwell is doing. It’s a lot more than meets the eye.

Ripple on a Playground runs at CNB Gallery, London, until 3 August. 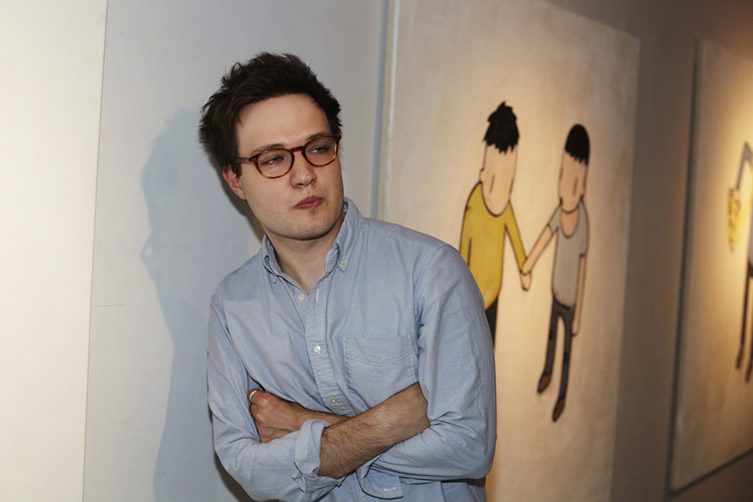 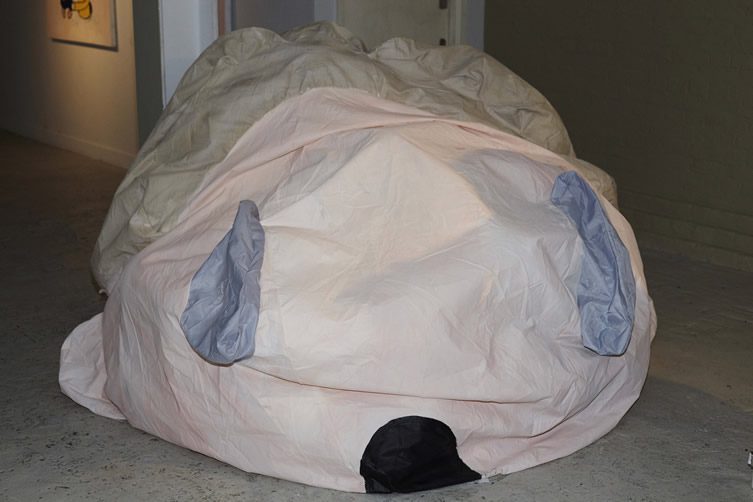 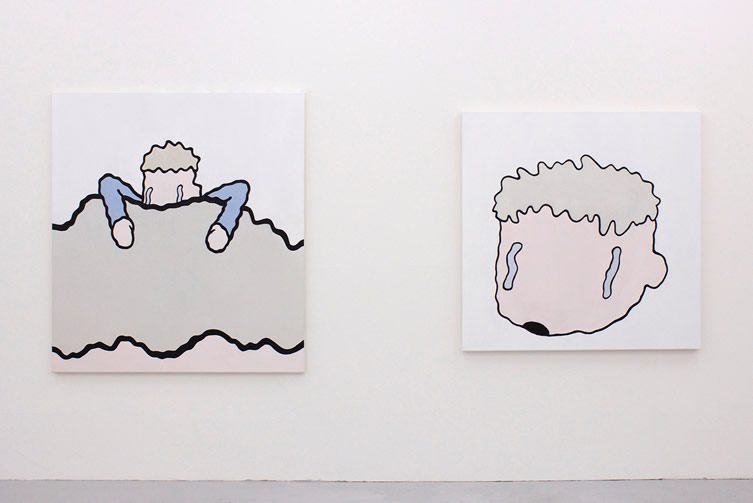 Based in Nagano, Japan, Hikari Shimoda first studied illustration at the prestigious Kyoto Saga University of Art, and Aoyama Juku School, before she began her career as a contemporary artist in 2008. Shimoda’s artwork paints a world where... 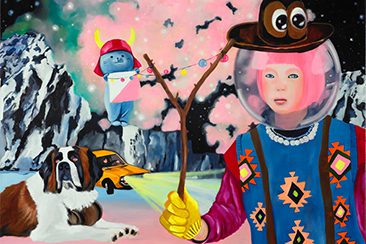 Super Future Kid, as the name suggests, is an artist who doesn't take things too seriously. There is little room for po-faced fine-art codswallop when the very best of East and West's pop culture come colliding together like asteroids of web... 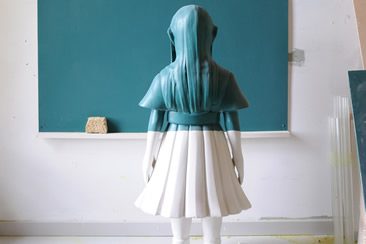 In the height of Finland's winter months, darkness is something all too familiar to its residents; little surprise then that its artists exercise the right to explore the art world's darker side - something that Kim Simonsson does relishes with open... 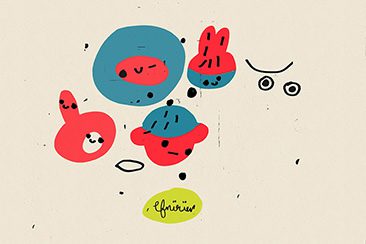 The cosmos a major influence for compulsive doodler...

What first sucked us into Welsh artist Osian Efnisien’s world was his ability to create ridiculously cute characters, from just the simplest of swipes of his felt-tip pens. Somewhat new to the character, illustration and art scene, Efnisien was...