Based in Nagano, Japan, Hikari Shimoda first studied illustration at the prestigious Kyoto Saga University of Art, and Aoyama Juku School, before she began her career as a contemporary artist in 2008. Shimoda’s artwork paints a world where cuteness and horror coexist, where fantasy meets reality. She credits the Japanese pop culture she grew up with as the main source of inspiration for her Irasuto style — art inspired by anime and Manga.

Through depicting children especially, Shimoda reveals the problems people in today’s society struggle with from within. In her Whereabouts of God portrait series of other-worldly horned children, Shimoda also comments on Christianity’s anointment of Jesus Christ as saviour of humanity, and a mirror of our fantasy heroes. These characters not only represent heroism, but an adult desire to watch our children grow and defend the world we have constructed. With each new piece, Shimoda advances her search for salvation and her deeper understanding of this chaotic world. In Berlin for this year’s Pictoplasma, we spoke to Hikari about her practice, inspirations, and recurring themes… 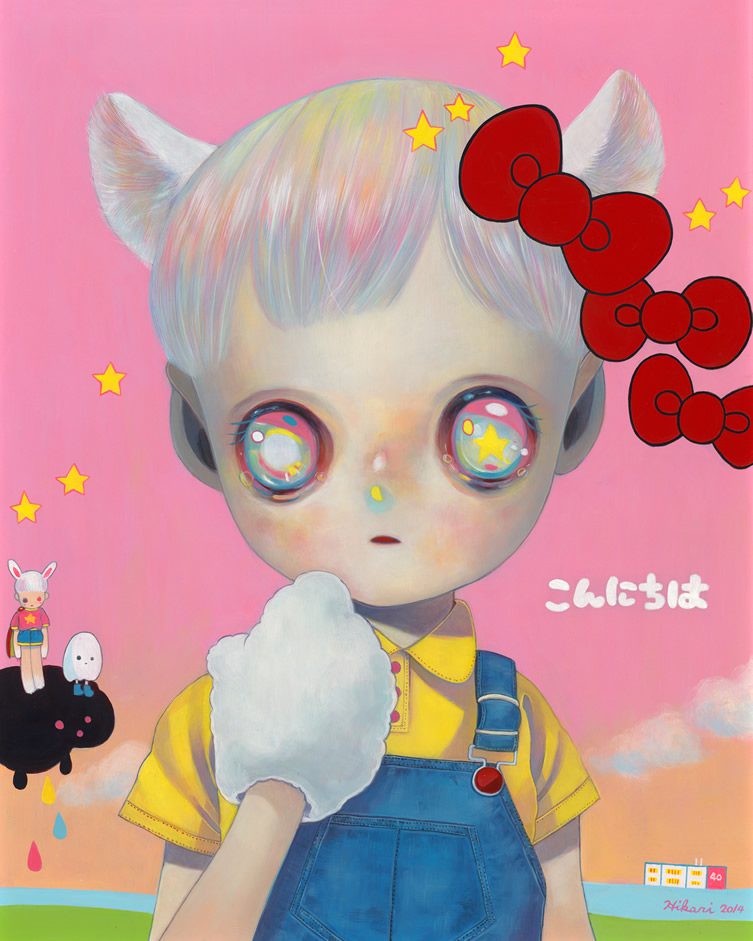 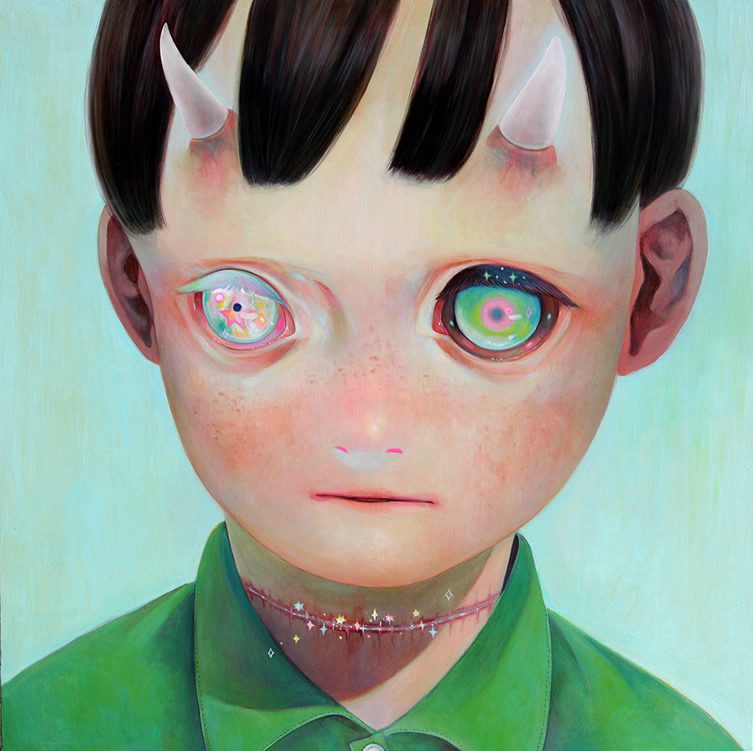 Tell us about yourself: where you’re at now, and maybe where you might be in 10 years time?

I’m currently living in the Nagano prefecture of Japan. On a daily basis, I enjoy watching anime, Manga — and recently, I’ve had the urge to travel more outside of Japan. In the future, I’m considering a good place to continue my work; and thinking about where to live accordingly.

How does your environment inspire your art practice?

Nagano is the countryside of Japan. I’m born and raised here, and around my house there is nothing but mountains and vineyards. I’m surrounded by “nothing” — separated from today’s modern world. However, it’s a world full of information that reaches me and makes me think about my connection to it objectively. I think that my environment also allows me to concentrate on the production on my works.

At what point did you start to experiment with collage and resin in your paintings? What prompted this?

I began to consider the idea of collage in 2012. After the 2011 Great East Japan Earthquake, which affected people internationally, I became interested in these connections in the world. I express this through such themes as hope and despair; life and death; light and dark; reality and fantasy. I came up with my collage method to represent this concept more fully. 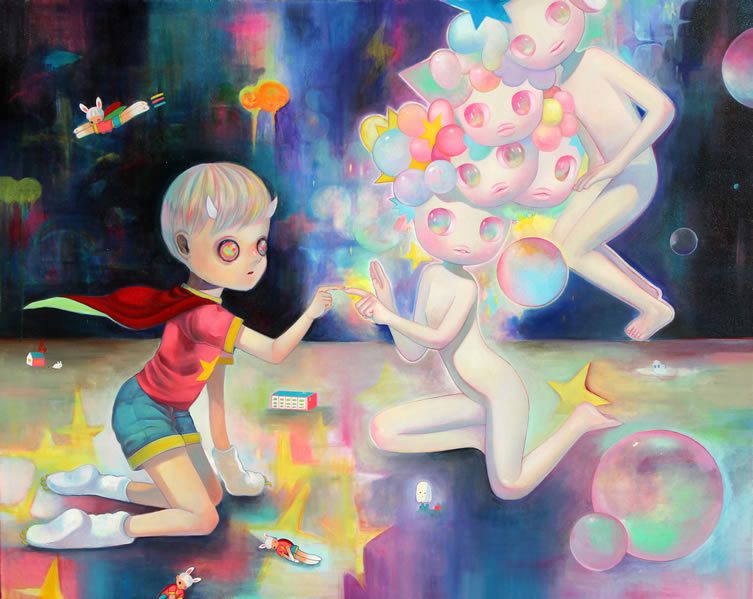 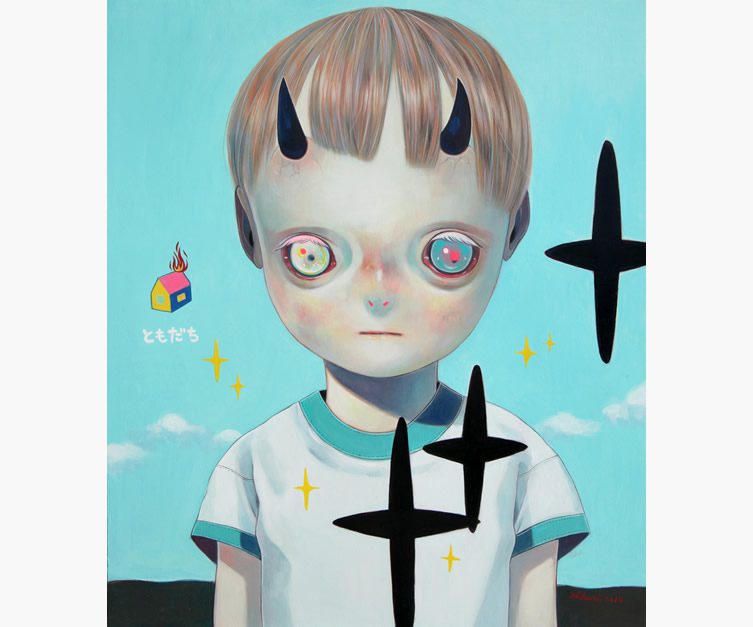 You credit Japanese pop culture as your main source of inspiration; creating art inspired by anime and Manga, tell us more about your early influences and where your ideas are formed…

My father was interested in anime and Manga, and he introduced me to the Studio Ghibli animated movies when I was a child. I grew up watching anime on television, I haven’t read that much Manga, but I have been exposed to it from a young age. I would copy the drawings and, over time, I taught myself how to draw cartoons. In addition, since I was in high school, I like looking at illustration online — which was very important for me. All these pieces of pop culture are very familiar in my life, ones that give the most impact.

Children are a reoccurring subject matter within your work, why do you identify with children specifically?

For me, this is my most effective means to convey my emotions and feelings to other people, but they are not “human” children. I like to use the example of magical girls (shojo) because they are inspired by human girls but they are characters. The age, sex, and individual identity of my “children” is ambiguous, leaving room for me to communicate my own feelings through them. 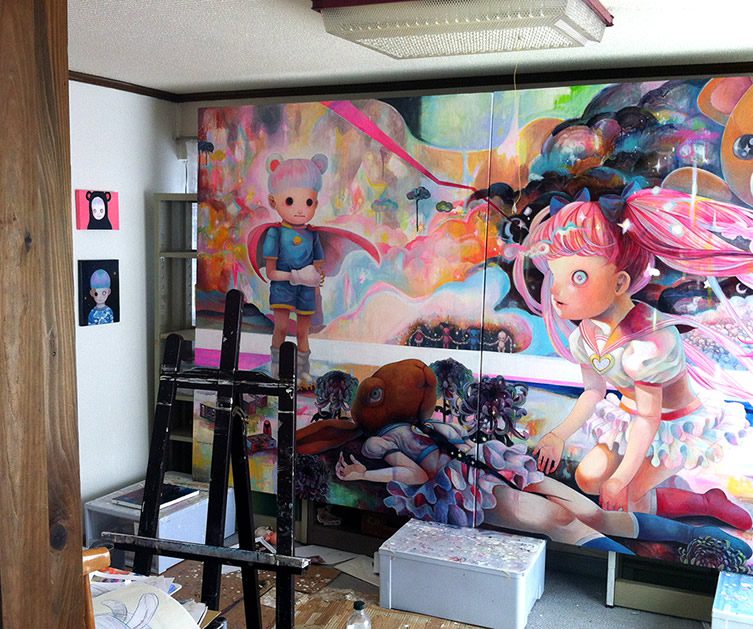 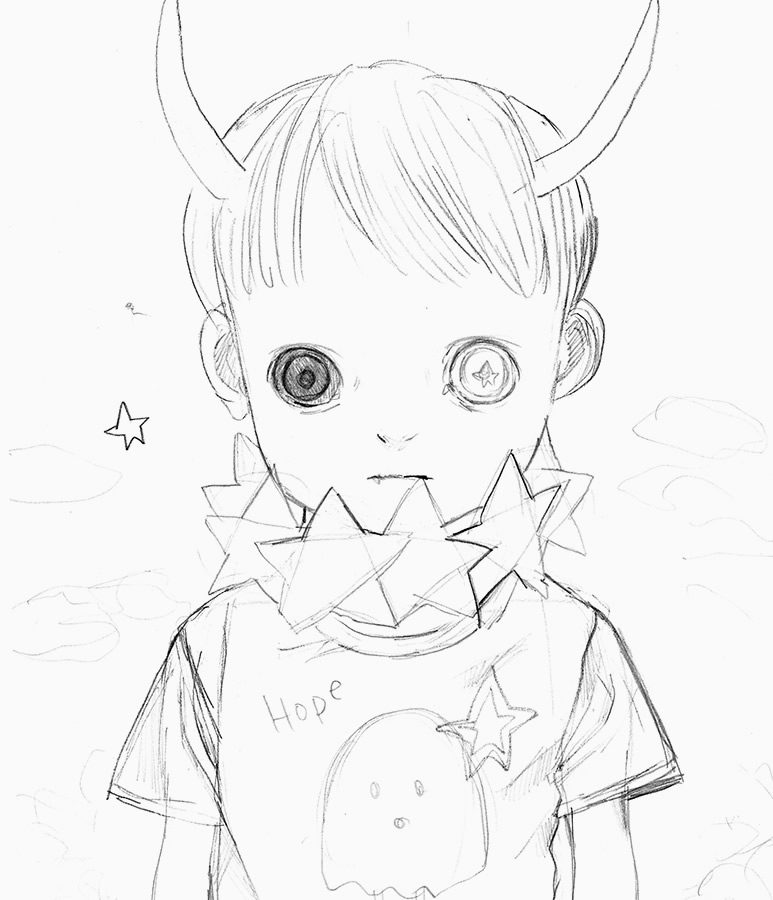 In the case of my oil painting portraits, I first draw a rough sketch from my imagination, and then transfer it onto the canvas by redrawing in oil. Sometimes an image comes to my mind suddenly, such as when I’m driving my car or searching the internet, and sometimes not at all. It’s unlikely that I would ever look to other artists’ work for inspiration, but rather the inspiration comes from within.

In your Pictoplasma talk, you spoke about the Fukiushima series, a collection of paintings inspired by Fukushima and the equally tragic Chernobyl disasters. Why did these events resonate with you? Can you tell us more about who is represented in these works?

Even before the earthquake, and the nuclear accident’s occurrence, I have believed that there is a living deity in things, and I have produced artwork that mix this theme with ideas about modern society. However, a part of the reason is that I lived very far, and felt separate, from the disaster. It was very shocking when the earthquake and nuclear accident happened. It was our worst nightmare when the tsunami claimed the lives of so many people in an instant. At the same time, I was confronted with images of human weakness and fragility.

This reality that we live in is heading into a direction of despair, and it has become clear that we are helpless from the power of the natural world. It’s not necessarily my personal belief, even though I’m making the work, but I felt compelled to draw such images of the world. In addition, I think it’s important to look at the realities we do not want to see. I’m continuing to draw the truth about our future. 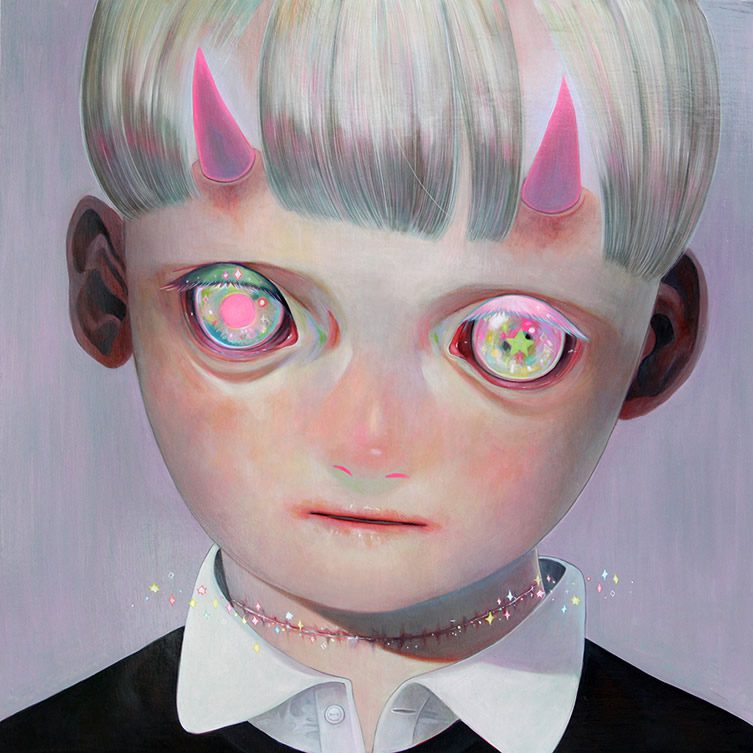 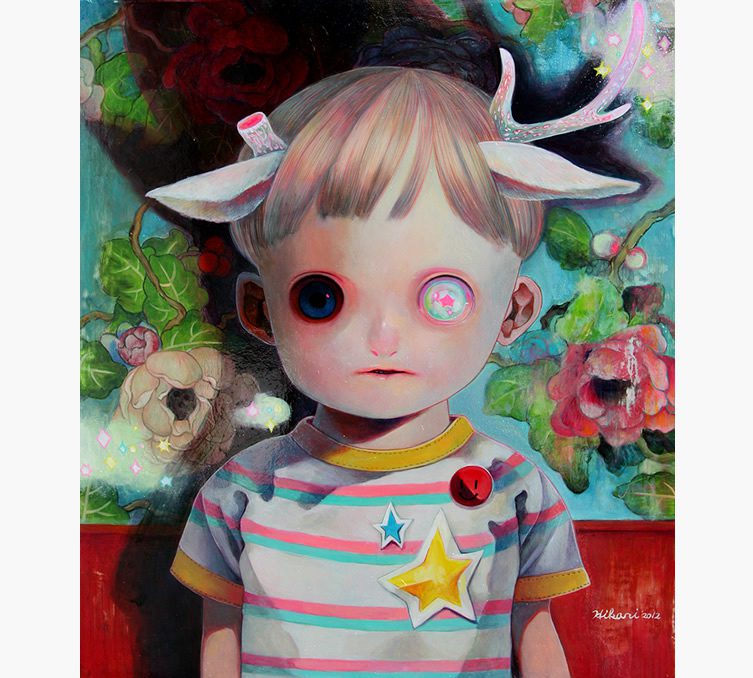 How did you find out about Pictoplasma, and what does it mean to present your work to the conference audience?

I wasn’t too familiar with Pictoplasma until recently, and I heard about the festival when they invited me by email. This was my first opportunity to talk about my artwork in public. To share my work with people from all over the world is something that I have always wanted to do, and I was really glad to hear the other lectures as well.

Can you tell us anything about the body of work and ideas you’re currently exploring?

I’m now working with a new theme, Children on the Edge; these children are on the border or “edge” of life and death, childhood and adulthood. I’m also planning my next solo exhibition in Los Angeles this winter. 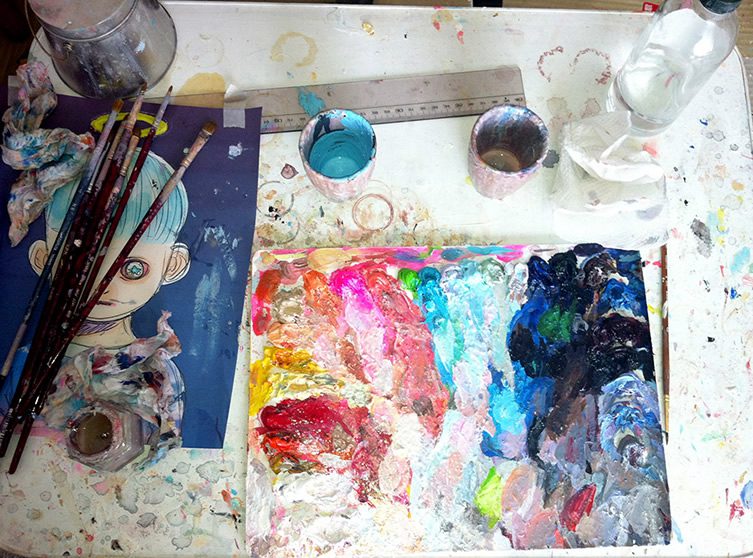 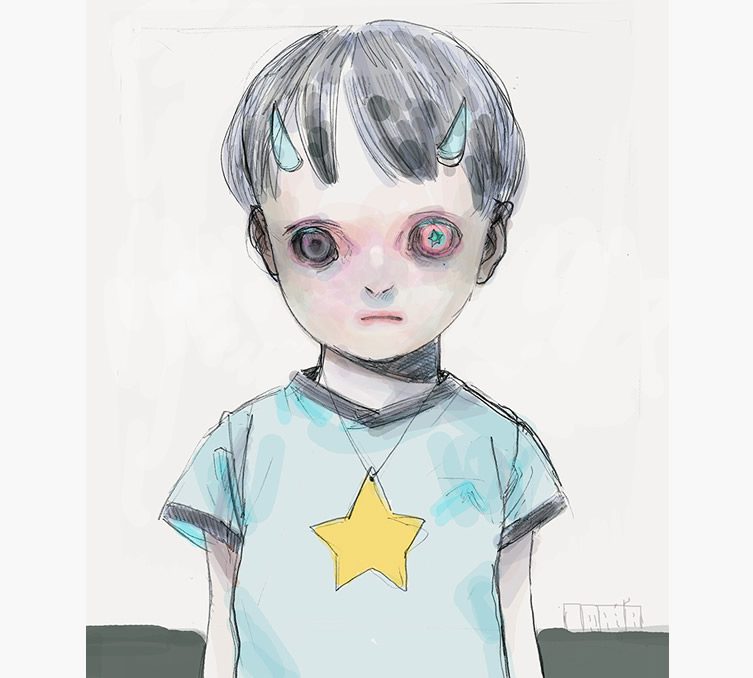