It’s a couple of years since we last caught up with the world of the smartphone and tablet App, and delivered our last Creative App Guide. And isn’t two years a long time in 21st century technology? Zuckerberg’s cronies have continued to shell out astronomical figures to lucky and plucky App developers, whilst iOS 7 changed the visual face of smartphone applications for the better.

There’s been some digital tools that we haven’t left alone here at We Heart HQ in those last months and plenty more newcomers that we anticipate being part of our lives for months to come, so thought it high time to deliver a second dose of essential creative apps. As ever, you can have your say in our comments – so if we’ve missed anything, feel free to shout about it. Until then – here’s our look at the best creative Apps on the market…

For fellow sufferers of short-term memory loss caught upstream without a paddle in our dizzying world of over-saturation, Thinglist is a welcome alternative to your iPhone’s native notes application – which itself suffers from a tad over-saturation. It’s all very simple: read about a film you want to watch, open up Thinglist, tap the movie icon and shove it in there – think of an idea to make you the next big internet billionaire, tap idea… and so on. Its simple categories make note-making simple, and exercising those notes at a later date even simpler. 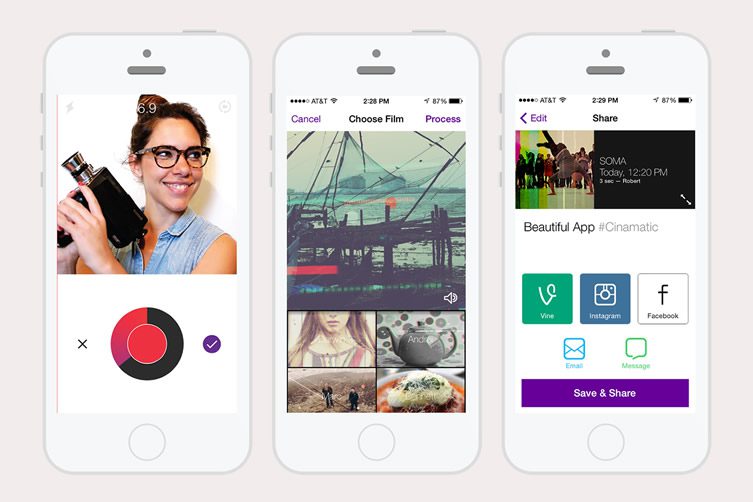 The folks at Hipstamatic must’ve choked on their chips when fellow App pioneer Instagram was the result of a billion dollar takeover from Facebook – their App signalled a changing tide in mobile photography, but its lack of social aspect ultimately saw them playing second fiddle to the San Francisco behemoth. Coming out from the ropes, their new App Cinamatic hopes to transform mobile video in the same tried-and-tested formula – but leaves the social aspect to Instagram, Vine or Facebook. The results are pretty tasty, expect to see early VHS-quality clips popping up all over your timelines soon… 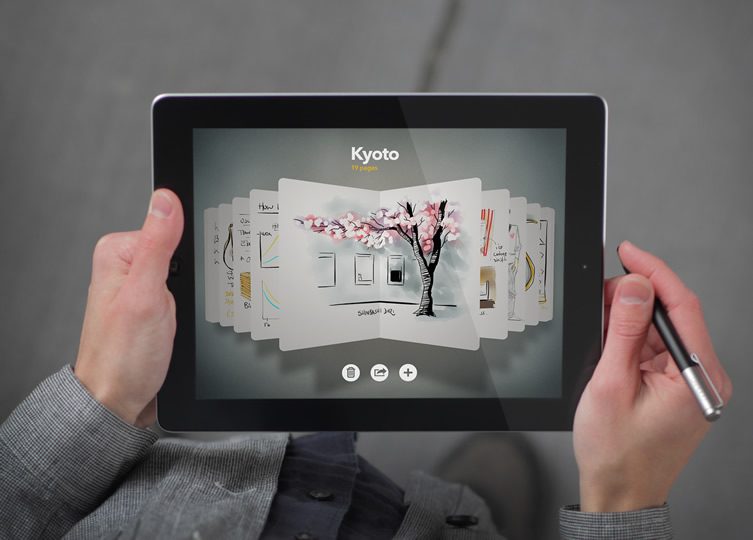 One sticking point that digital note-making, drawing, and drafting has had since the mobile revolution, is people’s continuing affection for physical notebooks, paper, pens and pencils. FiftyThree’s Paper is the realisation of that affection in digital form, especially when used with their very nice Pencil. Fashion designers, architects, web designers… Paper makes sketching out ideas as realistic as it’s ever been – and you can even have your digital notebooks printed into hard-copy Moleskines.

OK, you’re probably all over this one already – VSCO Cam simply writes itself into our list. Where Hipstamatic and Instagram’s changing face of mobile photography began, VSCO continues with aplomb, transforming your digital snaps into professional works of art. Invaluable. 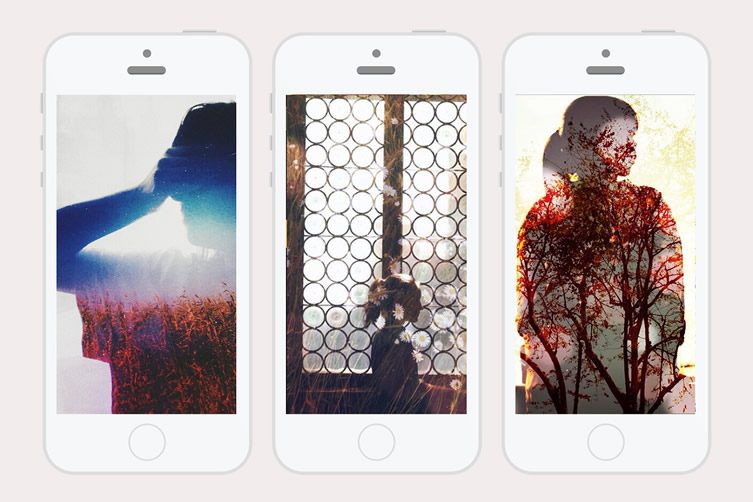 Continuing the thread of vintage offline camera capabilities on your very modern smartphones, Diana Photo brings Lomography’s most famous product to life in the digital realm. Diana’s famed double-exposure is emulated on your iPhone or Android device with similarly mixed results to the real thing.

The chaps behind deliciously simple Thinglist make music-making even more deliciously simple, with Keezy – an antidote to today’s overcomplicated music technology. Eight coloured pads, eight potential samples – record yourself singing, beatboxing, flinging the cat our of the window (*don’t try this at home, kids), and just about everything in between – play it back by pressing that pad again. Simples. 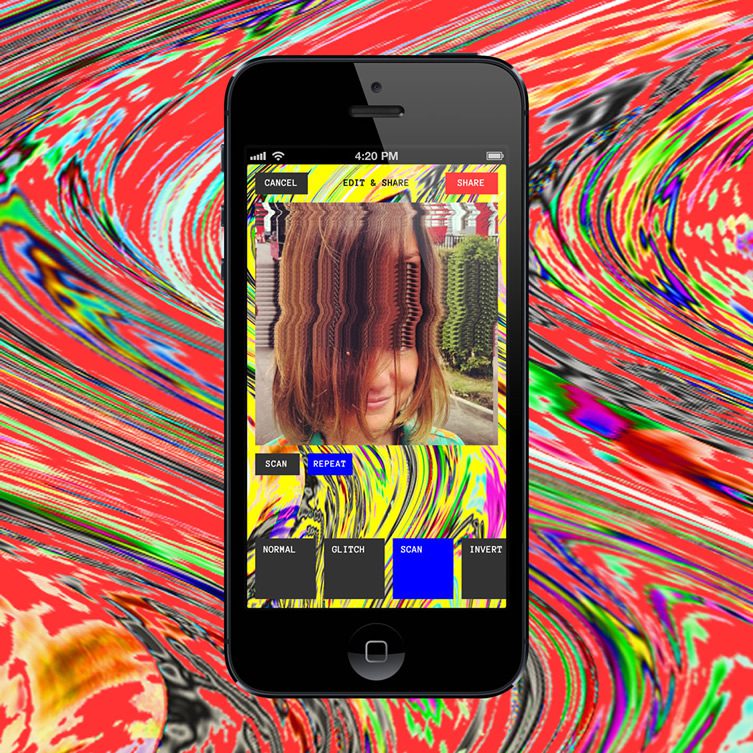 If vintage photography emulators are wearing you out (then we’re sorry for some of the above recommendations) – Glitché takes things back to the future. And beyond. Revelling in the decidedly 21st century craft of internet art, Glitché puts futurism firmly centre stage with its mind-boggling visual effects. If your Instagram feed is lacking a little Max Headroom (Google him kids) inspired weirdness, this is the App for you. 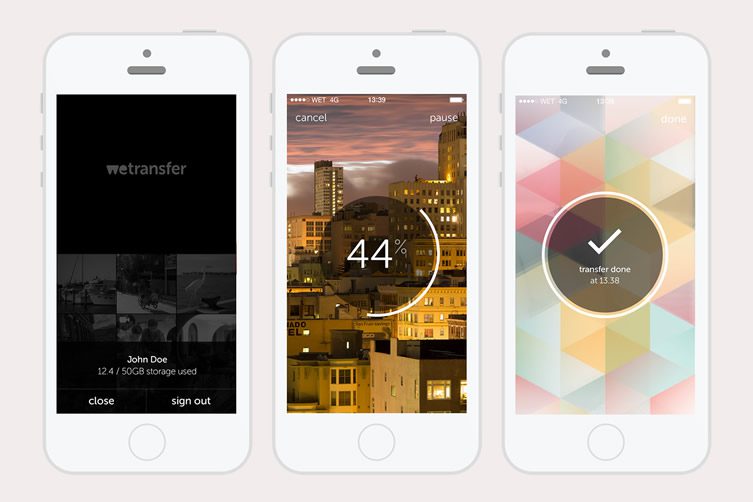 Anyone worth their salt working in today’s creative industries will know this one through and through – the only file transfer system worth giving two hoots about have added a mobile version to their arsenal, bringing the Amsterdam-based company’s instantly-recognisable style to the world of iOS (Android is on its way) data transfer. 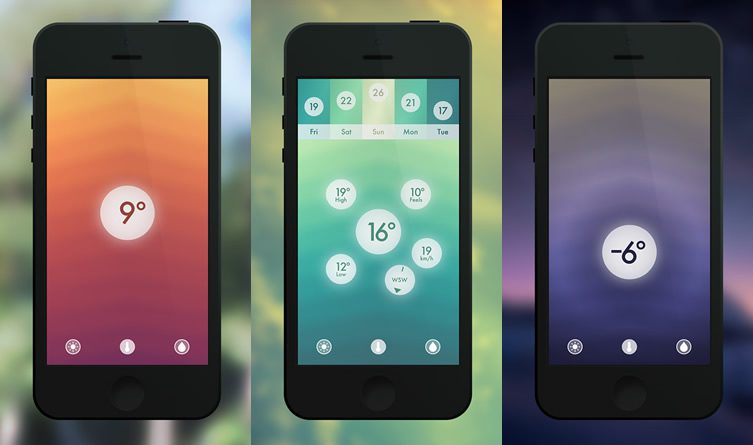 There’s a strong trend that’s dominant throughout the majority of the Apps that we’ve selected, and that’s one of simplicity – taking something familiar, and providing a wash of calm and sophistication. Apple’s movement towards flat design interfaces has provided the perfect platform for App designers and developers to cut the crap, and Haze is definitely another digital tool cutting that crap. Whether the simplified weather application can cut Britain’s crap weather is another matter, but it certainly makes rainy summer days look a lot better – just don’t look out the window. 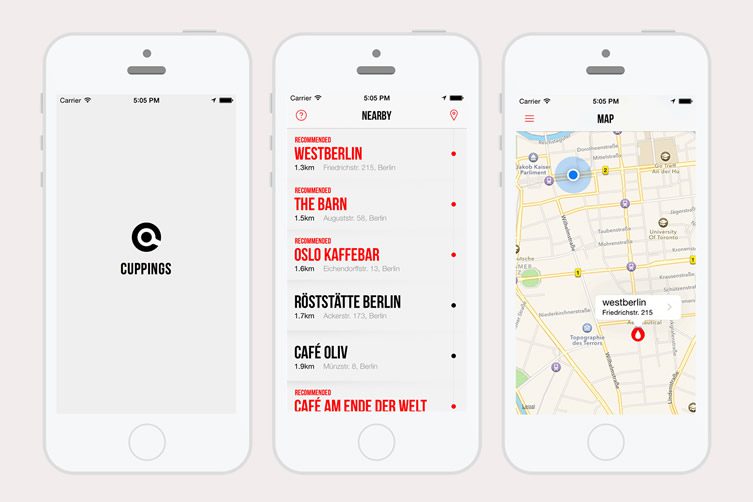 Whether you’re familiar with the term ‘third wave coffee’ or not, you’ll more than likely have experienced it. Think pipes, tubes and Willy Wonka innovation, cold brews, single origin and definitely not lattes. If your caffeine cravings kick in on a trip to an unfamiliar city, Cuppings is a dazzlingly straightforward alternative to trying to explain why you don’t want caramel in your macchiato at the local Sta****ks. A team of international tasters have done the leg work so you don’t have to, putting the best of third wave on the map in over 30 cities around the world. 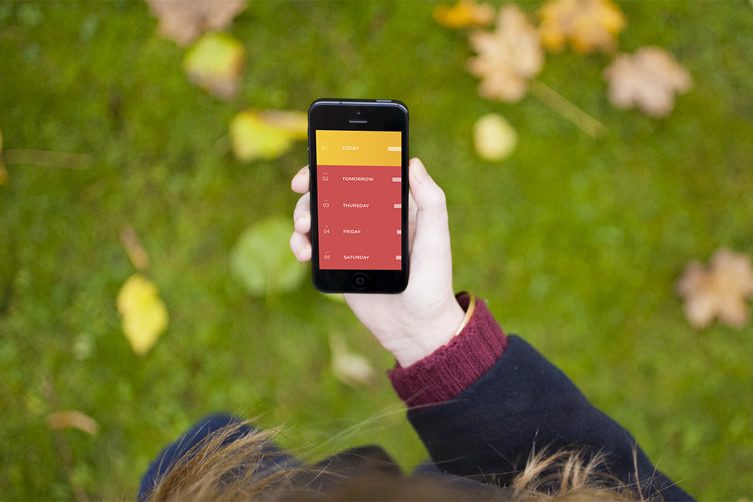 We’ve had simplified notes, and simplified weather – natural then that we should cover a simplified calendar interface. And that is something that Peek does very nicely indeed. Peek may miss some of the features that could make this a real alternative for power users, but its beauty lies in its design – a slick rethinking of Apple’s native calendar application that shows exactly what can be done by stripping something back to its core and starting all over again.

Like infographics? Like micro-managing your day to day life? caroline+young’s mem:o App turns your personal data into a beautiful series of coloured circles that individually chart your on- and offline existence. Watch yourself beat personal bests, quickly uncover what’s taking too much of your time… for those obsessed with visual data, mem:o is a mus:t. 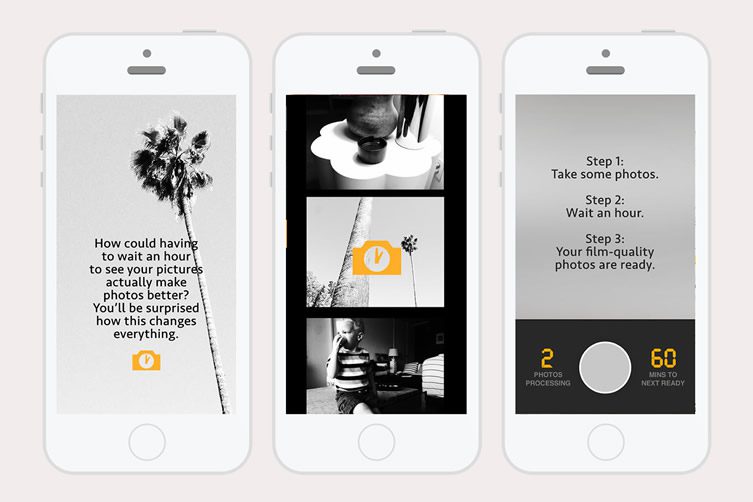 It probably won’t take a rocket scientist to guess the premise behind this little App. Finding one of the last remaining elements of old-fashioned photography and transporting it direct to your smartphone, 1-Hour Photo reignites the anticipation that used to accompany the final stage of your photographic journey – that uneasy 60 minutes spent looking at records (Google them) before heading back to Boots to find out whether your holiday snaps were anything other than blurry bits of sand and unintelligible shapes holding piña coladas. Returning your images back in beautiful black and white, here’s an App that makes you think a little before you snap. 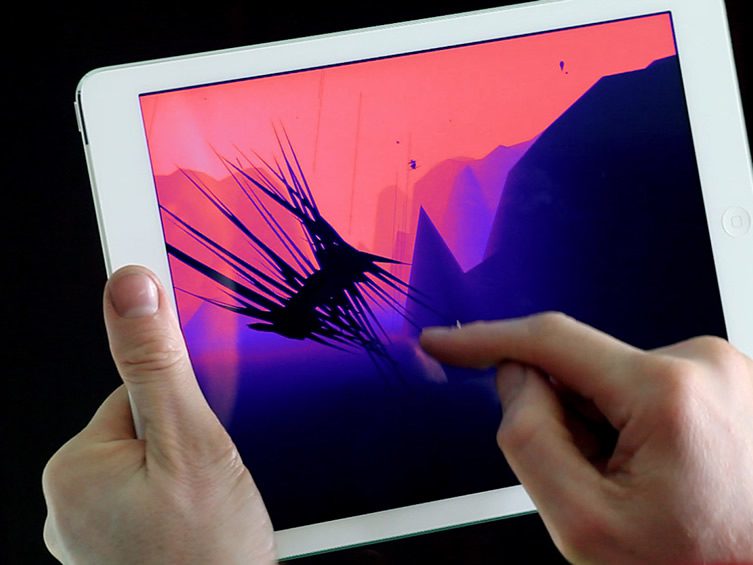 A collaboration between design studio Universal Everything and Radiohead, PolyFauna is a sonic and visual playground to take you away from it all. Whether its an iPad, Samsung GalaxyTab 3 or any one of countless tablets available from practically every big retailer in the land – this digital world (inspired by early computer life-experiments) turns your everyday on its head, and offers a welcome sanctuary of oddness. Ideal for writer’s block or required escapism after a long development project. 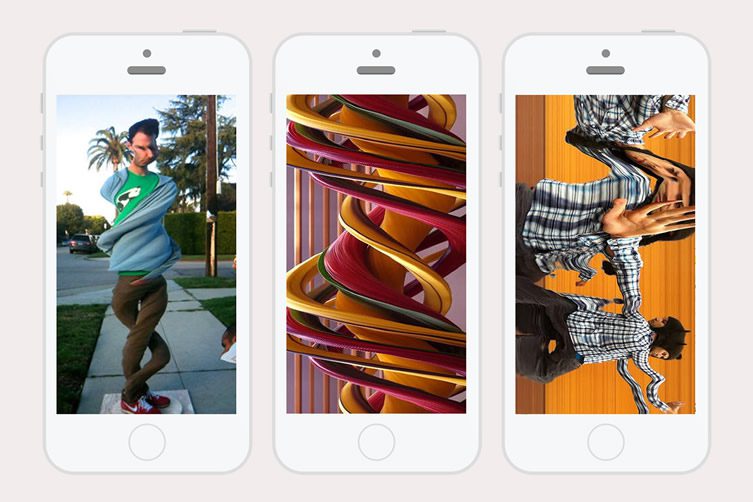 In similar vein to Glitché, Funner Labs’ Slit-Scan Camera brings some tongue-in-cheek digital distortion to your pics – weirding out your smartphone snaps with only your imagination as its limits. 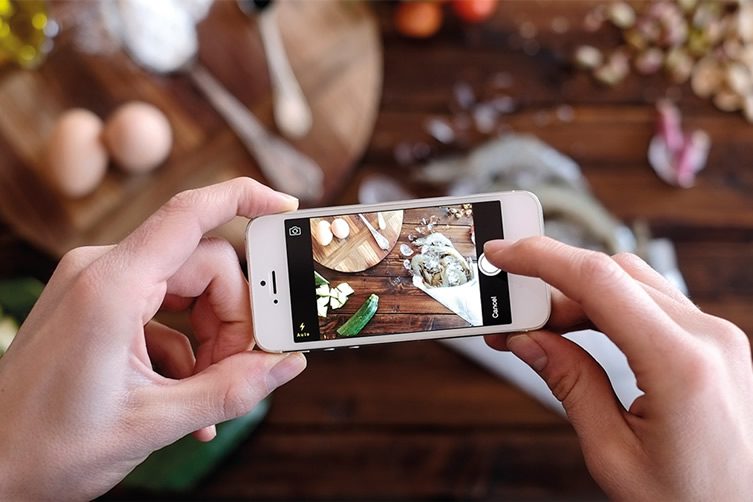 Another win for procrastinators over productivity preachers – Band Land gives your brain something to mull over in absence of anything better to do. Some nice and simple illustrations offer visual clues to a series of musicians – and, whilst Sex Pistols and Daft Punk may be at the easier end of the spectrum, there’s some real meat to get your teeth into along the way… 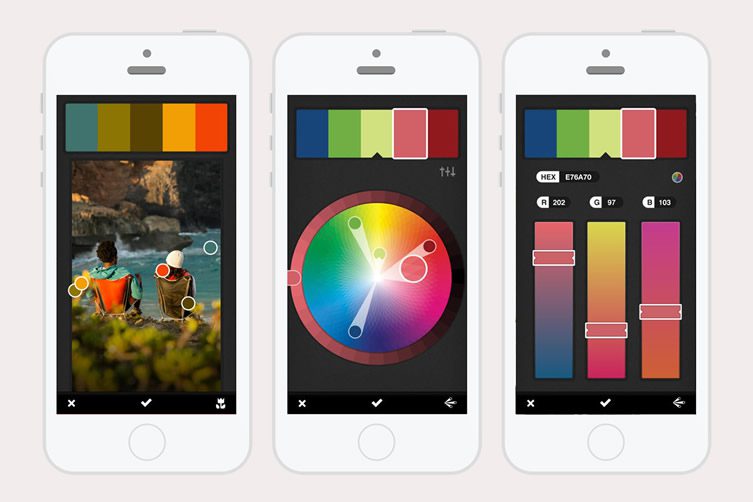 Think your mate’s shirt would look good as the background for a new web design, or your uncle’s car a nice hue for a new brand identity? Adobe’s Kuler devises complementary colour schemes from digital images on your smartphone – and converts your cherished moments into RGB and HEX. 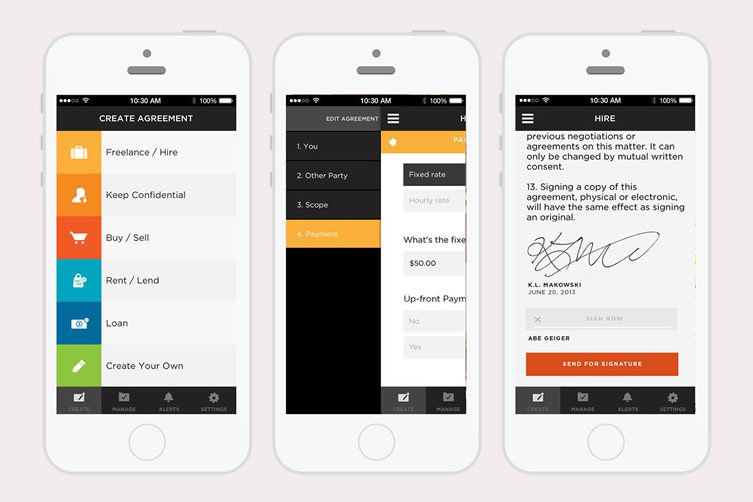 Lastly, a creative app that deals in something morbidly uncreative: law. A necessary evil, designers and creatives are oft asked to sign NDAs, whilst Airbnb hosts may want to formalise their latest deal. Shake very simply creates contracts from templates, and allows parties to sign their life away directly onto the screen – formal documents produced in minutes. Worth carrying around with you.