My fifth form careers advisor laughed in my face. Rock star? Ha. Here I am though, in Nick Mason’s private garage, the Pink Floyd drummer talking me through his modest array of vintage grunters. Modest. Ha. I wonder what the careers advisor would think of this. Mere plebs would faint at the sight of one of his vehicles alone (the zenith of Mason’s multi-million pound obsession, the 250 GTO, is thought to be worth well in excess of thirty million pounds). Mason has lost count. Literally.

Predominantly made up of Ferraris, I had driven up to the star’s Cotswolds motor-sport HQ astraddle my own fleet of 600-plus Italian stallions, the showroom-fresh Ferrari FF burbling through sleepy villages with its gargantuan 660 PS-producing V12. Heads turn. I’d jetted down from Manchester the previous day for a session at London’s prestigious AIR Studios with esteemed producer Steve Levine, later showing Canadian rock star Jonas Tomalty the bright lights of late-night Shoreditch. He’ll be talking about infamously grimy Club Aquarium for years to come, I’ve no doubt.

Alas, ladies and gentlemen, this is where fantasy and reality collide in a staggering haze of unbranded spirits and counterfeit Jägermeister. You see, I go to places like Club Aquarium for a late drink when everywhere else shuts. Rock stars invite groupies, dealers and fishmongers to their hotel suites on Park Lane. The most damage I’ve done to a telly in a hotel room is faintly unhinge a wall bracket. By accident. I did once use a face towel to clean chilli sauce off my face, though. Rock. And. Roll. 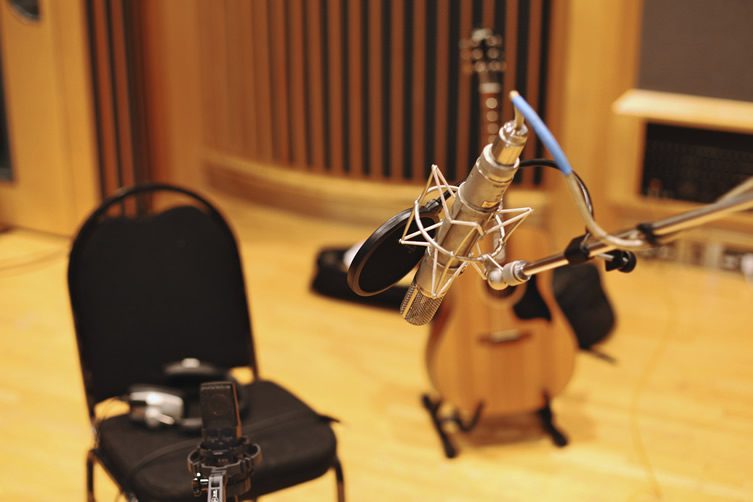 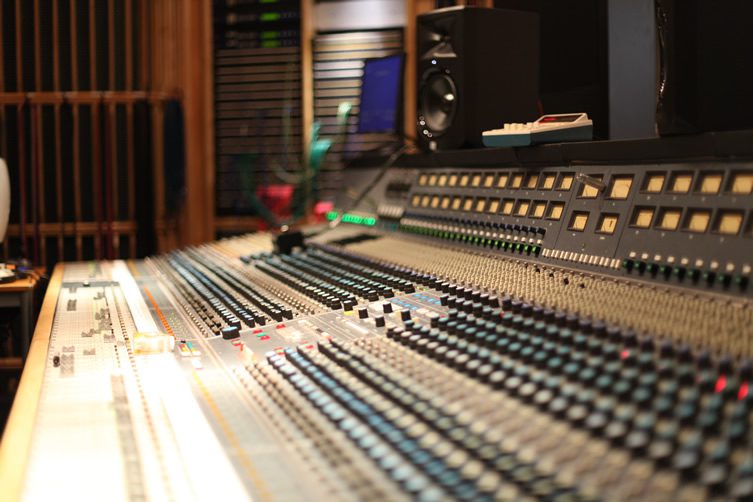 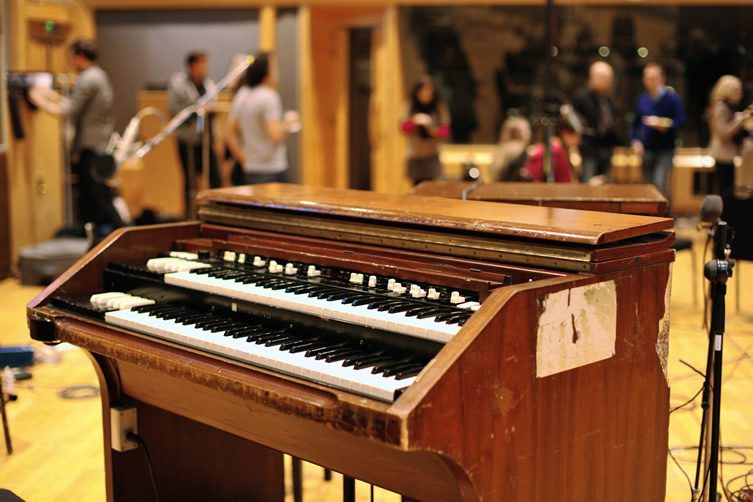 Truth is, there was a time when all I could imagine I would do with this misspent life was be that rock star – well, lo-fi indie upstart (and later electronic beat experimentalist) to be explicit, though let us not split hairs over genres for the sake of this story – but sonic success would continue to evade me throughout my early adult years. Ferraris, chinwags with prog-rock icons, days spent loitering in professional recording studios? I’m here at the behest of international audio Goliath, HARMAN, their subsidiary JBL Professional having recently bestowed its aural expertise upon the new Ferrari FF, herein lies the connection to Mason, my Italian stallion, AIR Studios.

Let’s paint the picture a little clearer: JBL meets Ferrari, produces sound that parallels the Italian brand’s famous grunt and grace, conceives the Journey of Sound, invites a select assemblage of scribes to (loosely) trace the footsteps of Liverpool’s most famous export from the North West to Hamburg, the German dock where John, Paul and George met Ringo. The Fab Four? The FF. It’s a tenuous link, yet the product nor the journey itself is anything but flimsy. A party in Liverpool; a party in Hamburg; a group of musicians (aforementioned Jonas Tomalty and his ‘Massive Attraction’, Springsteen-esque rising star Jamie N Commons, and Kate Nash, amongst others); a studio session (where JBL’s stellar new Synchros S700 headphones are trialled); a meeting with a Ferrari-obsessed bona fide rock and roll legend; hours spent behind the wheel of a £230,000 gran turismo… JBL’s Journey of Sound is one epic expedition.

It begins for me at AIR and it ends on Hamburg’s Reeperbahn, the infamous red light district that turned The Beatles from boys into men. In between are cocktails, fast cars, dinner with a platinum-selling Brit-award winner and hangovers – it’s fast-paced, racy and any number of other motor-sport metaphors you care to throw in. The product? 7.1 QuantumLogic Surround; 1280-watt amplifier; 15 speakers. JBL Pro have rewritten the rulebook on car audio – the sound inside the FF is as electrifying as the ride, HARMAN’s sonic prowess informing a sound-system worthy of sitting side-by-side with an Italian great. 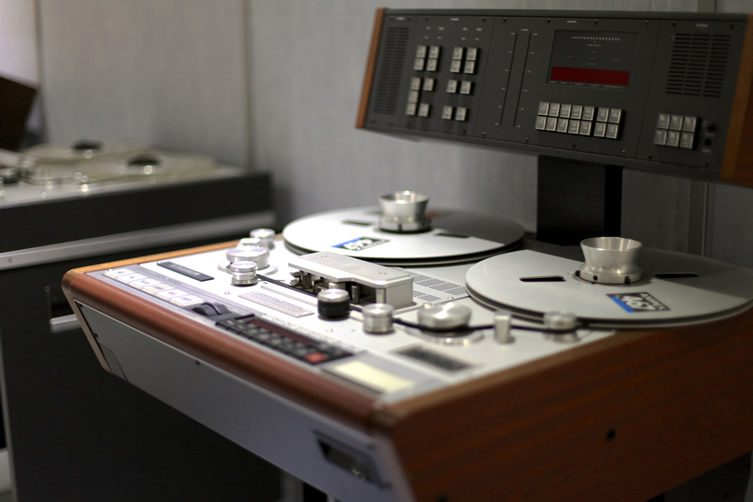 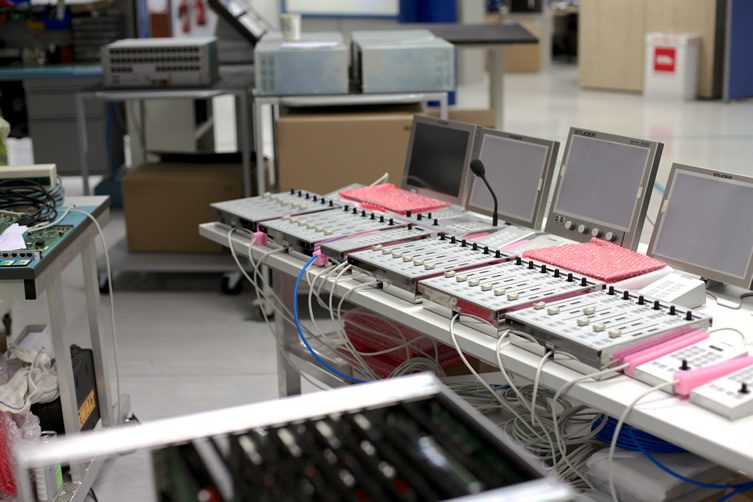 — Mason talks through his collection whilst tapping on iconic Italian sports-cars with his wedding ring. Here is a man for whom cars are not to be objectified, practically every car in this garage was bought with the intention of racing. Yes, Mason had oodles upon oodles of cash, but there’s an eccentric English reality here that belies the feather-duster obsessives who largely occupy the high-end of the vintage car market. 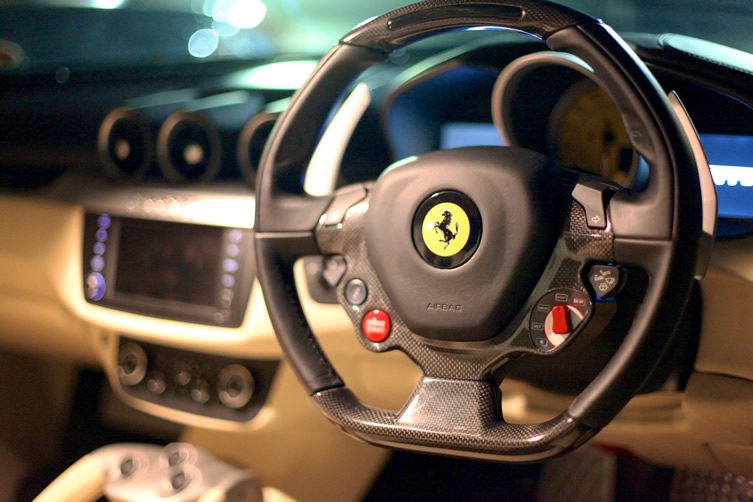 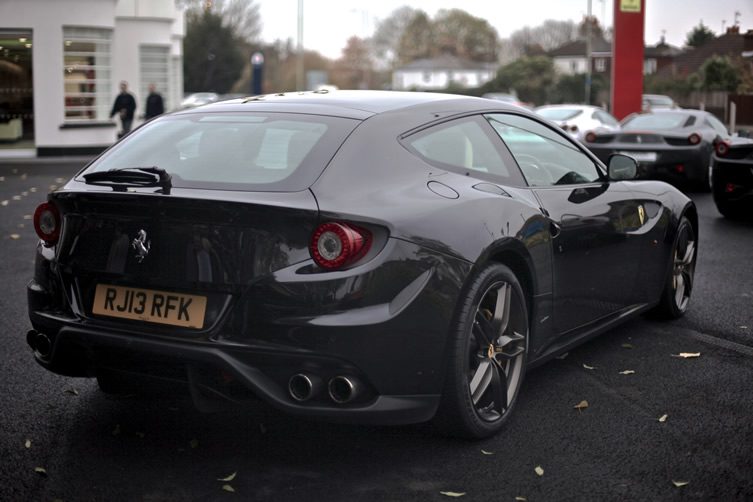 Picking up our ride
Photography © We Heart

Watching Steve Levine at AIR is enlightening stuff, I’ve been in many a recording studio, but the speed at which the producer works – and the dexterity of his engineer – is frightening. A visit to the home of fellow HARMAN subsidiary brand Soundcraft is fascinating, but it’s hard to compete with what lies ahead. Flying through the English countryside from London to The Cotswolds in a brand new Ferrari consummates most young boy’s dreams, meeting Nick Mason most stoned teenagers’. The drummer is a delight: charming, humble, inviting. “Get in” he utters, my loitering outside his 250 GTO evident. Get. In. Get in a thirty million pound Ferrari.

Mason talks through his collection whilst tapping on iconic Italian sports-cars with his wedding ring. Here is a man for whom cars are not to be objectified, practically every car in this garage was bought with the intention of racing. Yes, Mason had oodles upon oodles of cash, but there’s an eccentric English reality here that belies the feather-duster obsessives who largely occupy the high-end of the vintage car market. His father having driven the 1953 Mille Miglia, with the help of a certain Enzo Ferrari, Mason is the real deal, and it’s his passion that galvanizes us for the return leg – the FFs are driven quicker, harder, more authoritative. More ‘as they should be’. 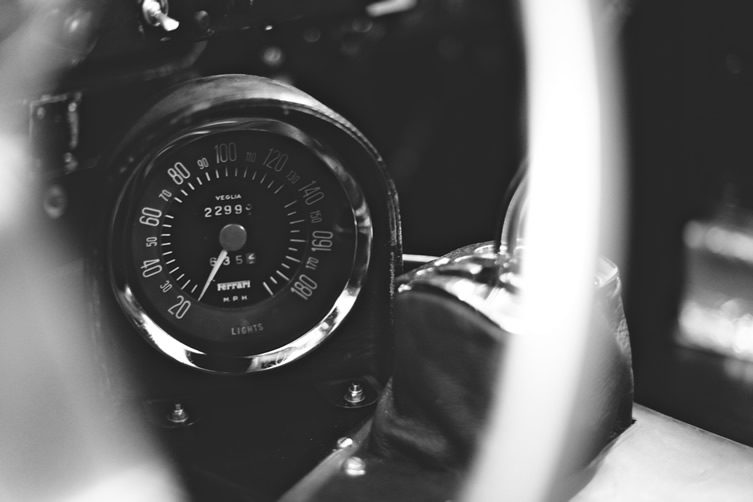 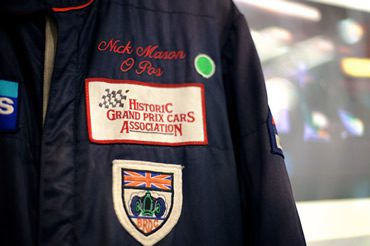 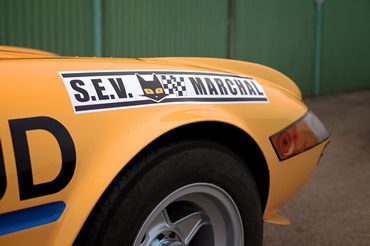 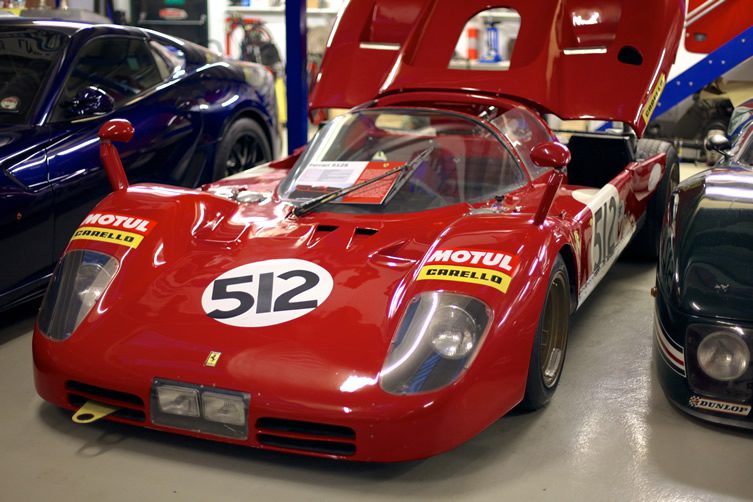 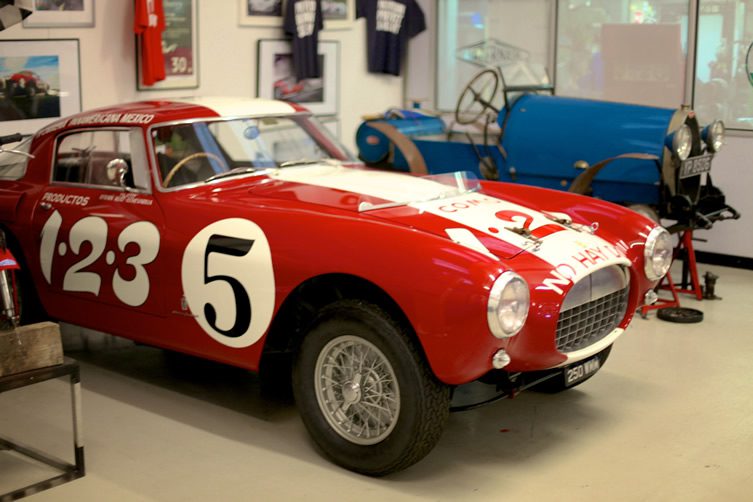 Nick Mason’s garage,
(somewhere in The Cotswolds)
Photography © We Heart

Dinner, drinks, sleep (not much), flight. The downpour in Germany literally pisses all over our chance to open up the Ferraris on the Autobahn. No breakneck g-force, no metaphorical two-fingered salutes to the British authorities, no Kraftwerk. The German electro pioneers’ 1974 song was designed to embody the spirit of motorway driving – JBL Pro’s future-forward ‘soundscaping’ of the FF should be its perfect bedfellow but, where the audio giants succeed, the German weather fails. What Germany does bring is a realignment to our trip’s vague theme, a walking tour of the Reeperbahn, the Indra and Kaiserkeller key figures in the Fab Four’s Hamburg history, a guide with a guitar, A Hard Day’s Night. It’s a welcome dose of frivolous fun in a cold, cold dockside city, and the precursor to tonight’s Journey of Sound celebrations, where Nash and Commons ply their trade alongside an abhorrent German boy band.

Familiar faces join us to party: Levine, Soundcraft’s Marketing Director Keith Watson, Nash and Commons themselves now feel part of the team. There’s no Mason, but his is a lasting impression, a pioneer spirit that embodies the collaboration between behemoths of sound and road. JBL and Ferrari have followed The Beatles’ footsteps from Liverpool to Hamburg – we all know how their story ends… 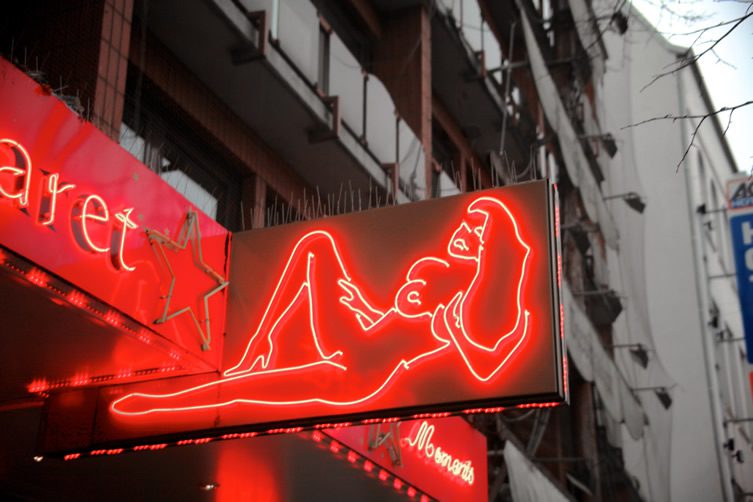 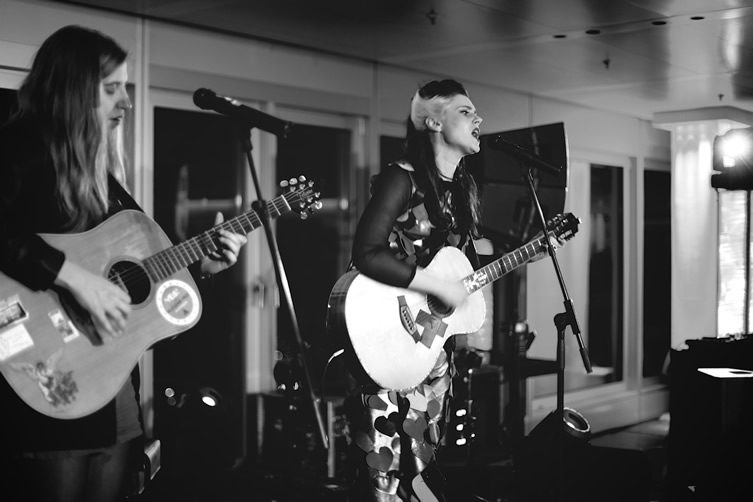 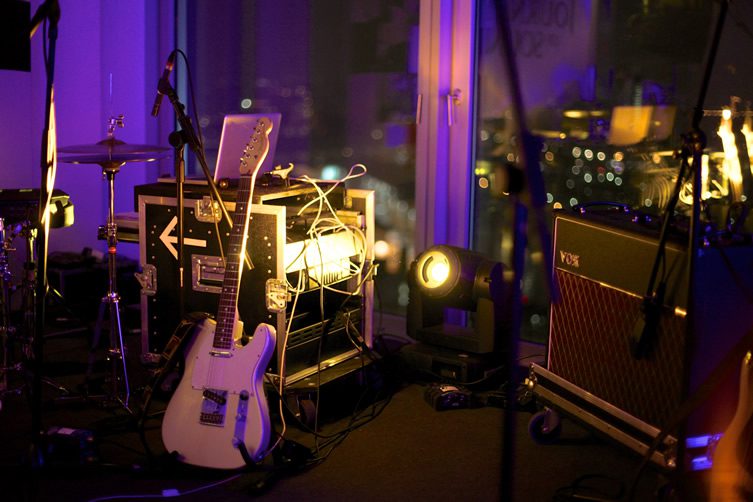 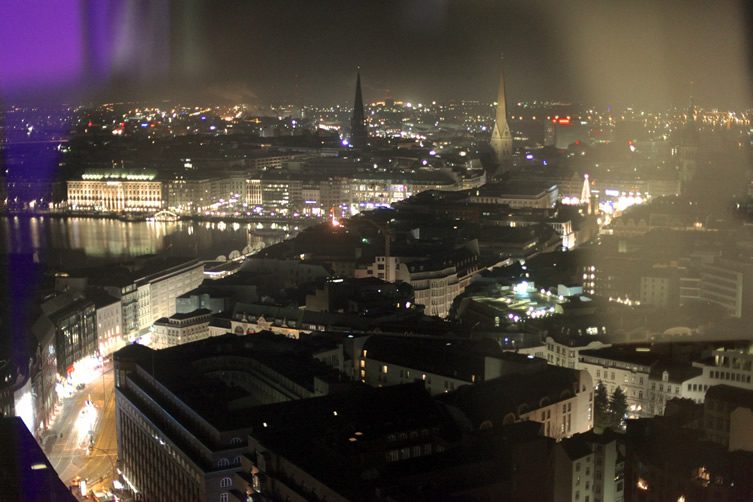 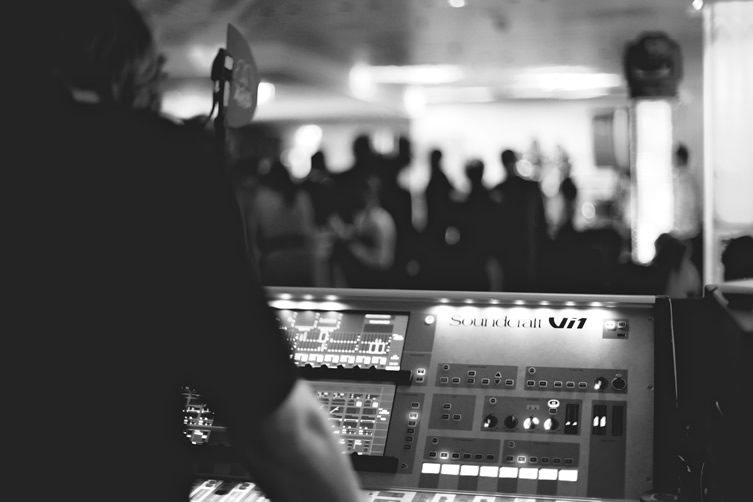