Its style has been aped to such an extent since, that the skyscraper located at 375 Park Avenue in Midtown Manhattan today looks markedly plain. When it was completed in 1958, though, its less-is-more restraint was radical; a standard-setting archetype for countless to follow. Mies van der Rohe’s Seagram Building is what children will draw if tasked with sketching a skyscraper. It is iconic in its bare-bones minimal modernism; its architect one of contemporary design’s most seminal figures. 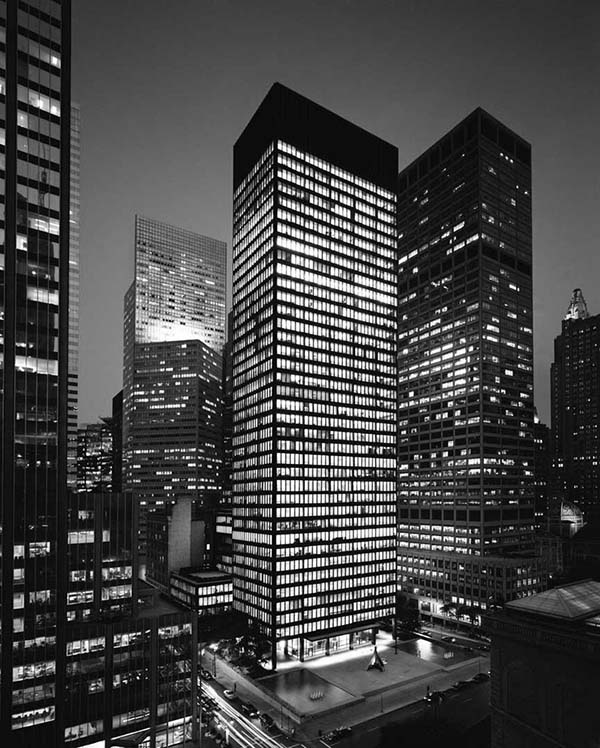 Ludwig Mies van der Rohe arrived in the United States at the end of the 1930s, the Bauhaus—of which the German-born architect was a director—having been shut down by the Nazis in 1933. It is here that he would redefine the modern high-rise, but it is a building that Mies unveiled before the Nazi Party took to power that will endure as one of modernism’s most influential. With Barcelona transcending from the grip of the art nouveau-inflected modernisme to noucentisme, the classical style that would replace it, the city’s second World Fair in 1929 introduced a structure that would appear light years away from its contemporaries.

Designed by Mies van der Rohe and Lilly Reich as the German Pavilion, the glass, steel and marble emblem of modernist design remains a touchpoint for 20th century architecture as a whole. Disassembled in 1930, its persisting significance would see an exact reconstruction of the Pavilion opened on its original site in 1986. Its replica contributing to a revival in modernist design, the Barcelona Pavilion is as potent an architectural wonder today as it was when it rewrote the rules of design in 1929; its blurring of spatial boundaries having informed decades upon decades of copycats. 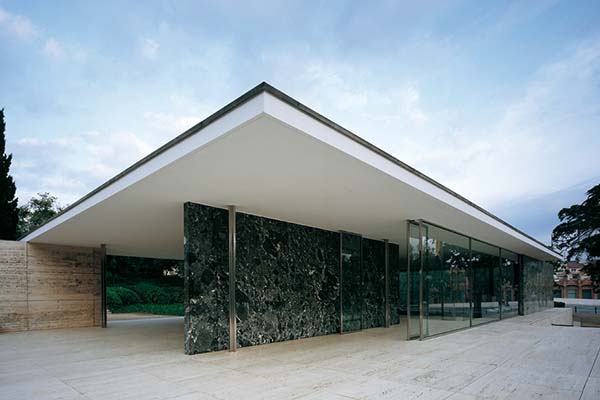 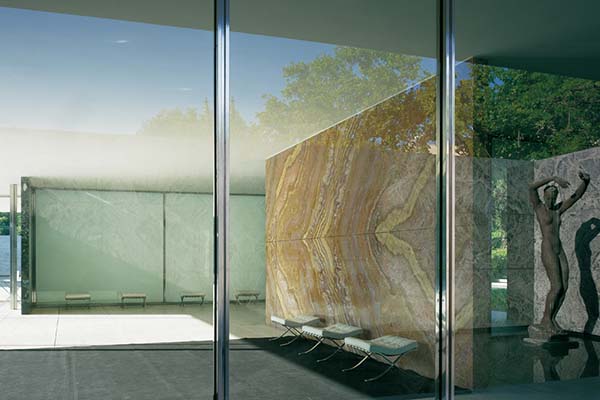 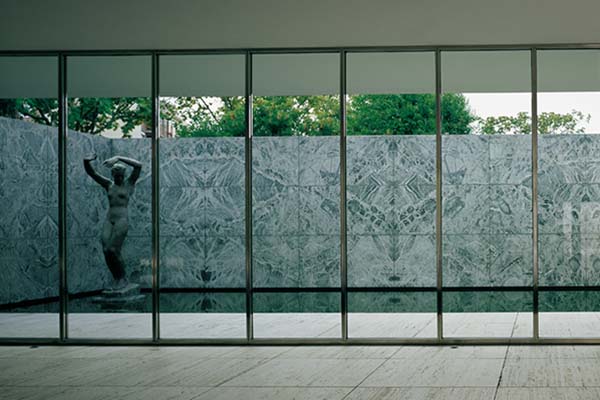 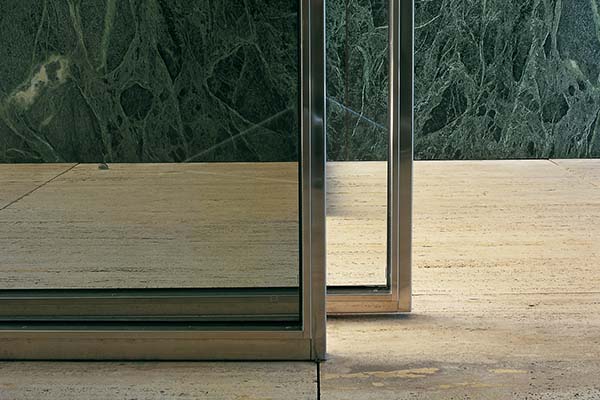 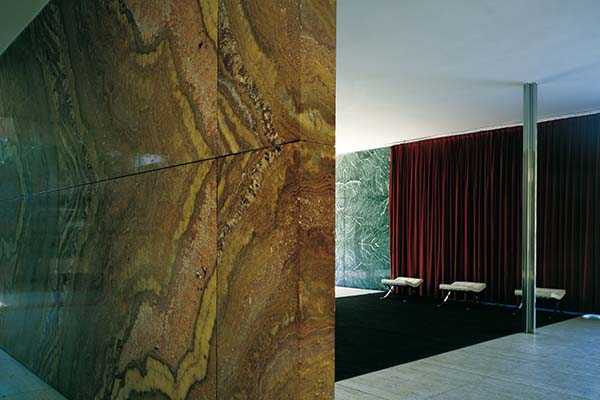 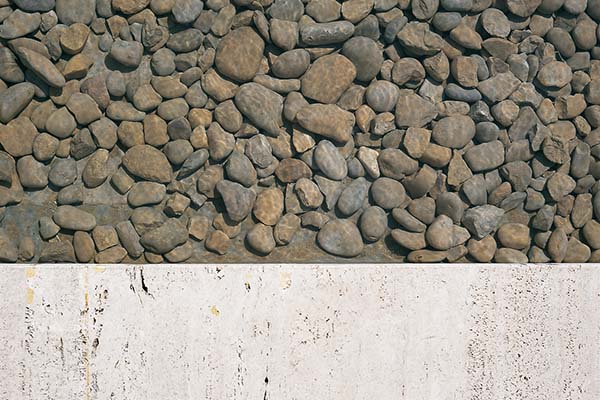 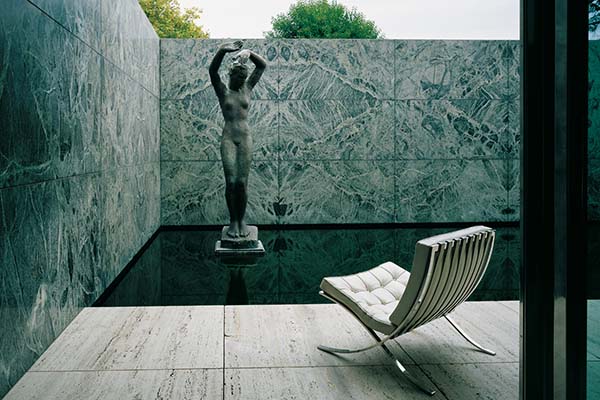 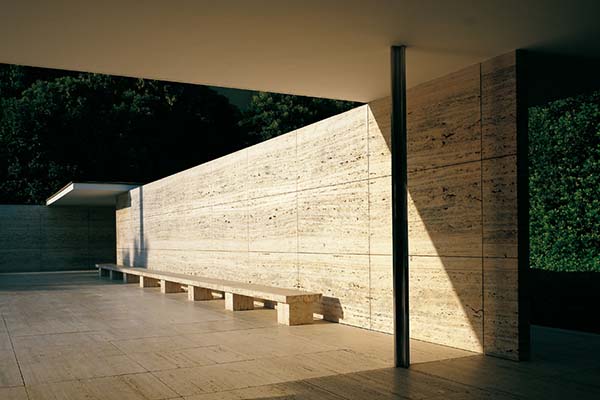 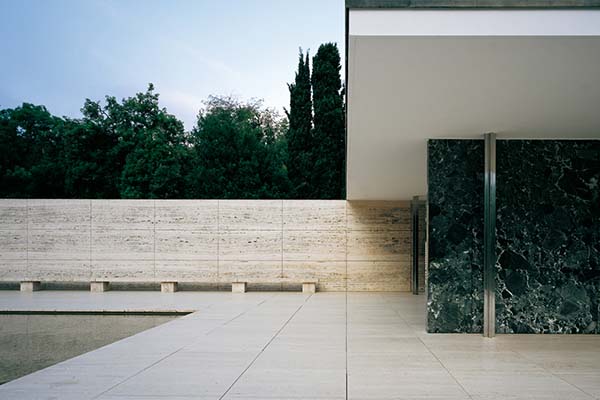 Inviting leading international architects and artists—the likes of Ai Weiwei and Pritzker Prize-winner Kazuyo Sejima—to create interventions since its 1980s reopening, Mies van der Rohe’s landmark design has, since 2012, also welcomed the city’s most progressive annual event. Ever seeking to push the limits of sonic exploration, the avant garde ‘advanced music’ festival, Sónar, has led a series of site-specific ‘sonic interventions’ that exploit the German architect’s transient use of space. Where other music festivals add new stages and expand line-ups, Sónar explores the boundaries of sound, design and experience. 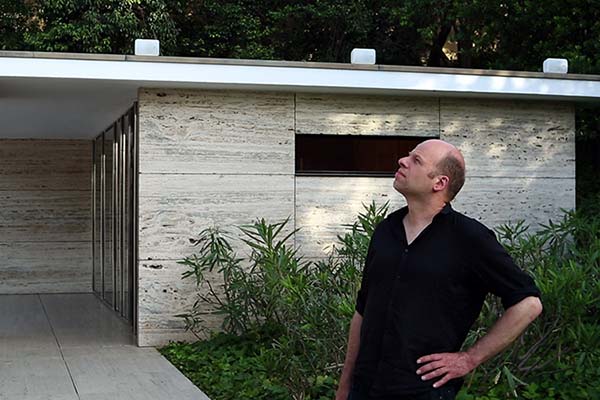 Bringing together field recordings from forests in locations as varied as Canada and Costa Rica, Senegal and Japan, Francisco López’s Ghost Forest introduced the Sónar-Mies Pavilion sonic interventions between 14—31 August, 2012. Using a sound system designed specially for the installation, the recordings of diverse forests underwent extreme filtering, the result a ghostly spectrum of frequencies that would be automatically mixed (with ever-changing combinations) in the space. Turning the Mies van der Rohe Pavilion into a complex, multi-layered aural environment, the Spanish sound artist put the building’s indoor-outdoor connection with nature to fine use in a highly-experimental beginning to this ongoing series of interventions.

“When we describe and analyse sounds we can separate a sound in its individual overtones,” explains Dutch composer, Edwin van der Heide. “This implies a hierarchy between sound and overtones. Spectral Diffractions is a proposal for autonomous overtone control and attempts to reverse this hierarchy.” Consisting of 40 loudspeakers located across the Pavilion’s roof, each speaker in Van der Heide’s 2014 intervention would play different partial frequencies present in the sound of a human voice.

“While the sound is from a perceptual point of view equally present as the Pavilion,” he continues, “it nevertheless has an ephemeral quality that opposes the solid nature of the pavilion.” Visitors moving through the space gained new perspectives on the human voice; architecture and humanity coming together in a revolutionarily fashion that Mies surely would have approved of. 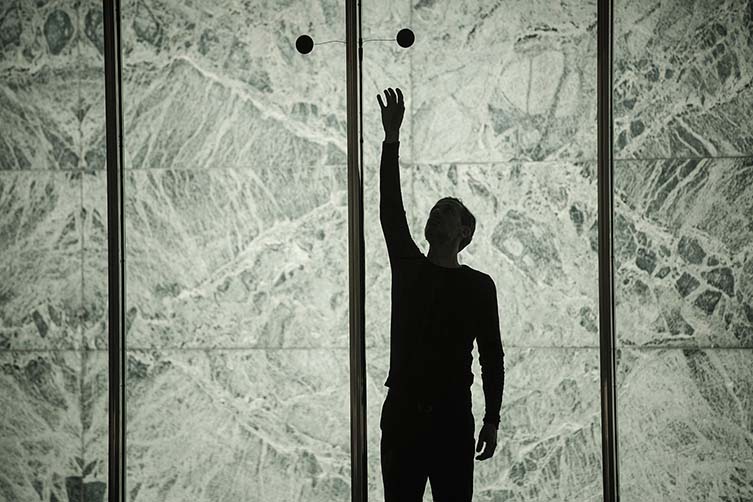 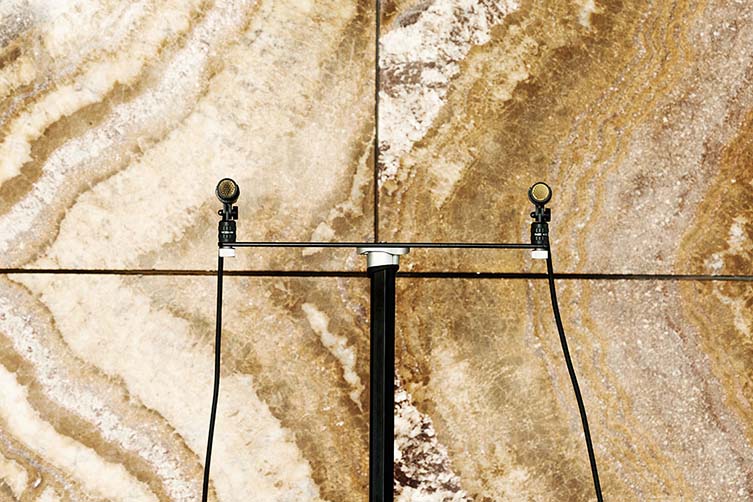 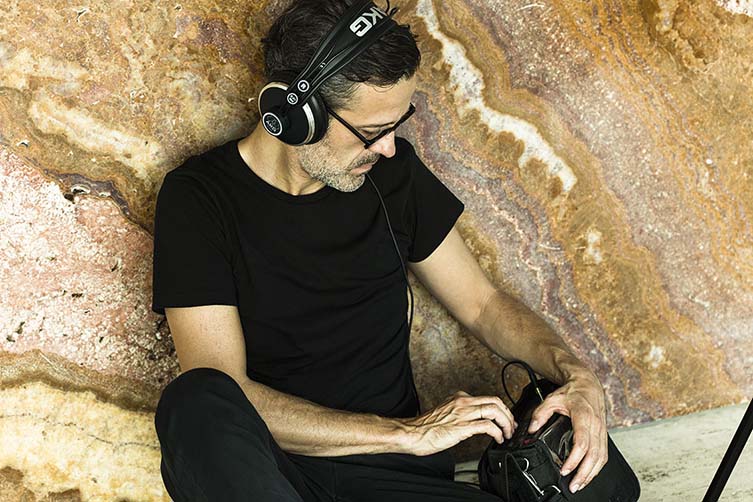 “We should attempt to bring nature, houses, and the human being to a higher unity,” the German architect said of his work. As was the case with Van der Heide’s Spectral Diffractions, Alex Arteaga’s 2015 sound installation would complement both the Pavilion and Mies’s design philosophy. Acting as a series of interruptions and transparencies of space, the Pavilion delivers new perspectives time and time again as you move through it, blurring spatial distinction and imposing an ethereal sensation upon its visitors. 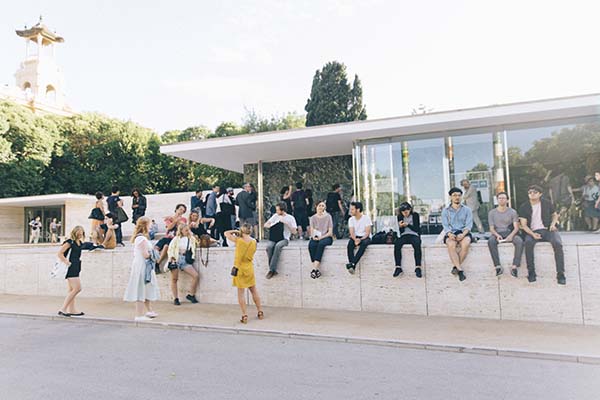 Sónar-goers gather at the Pavilion in 2016 to witness New York sound artist Tristan Perich’s installation of his 1,500-speaker Microtonal Wall.

In Transient Senses (presented to the public between 29 April and 21 June, 2015), Arteaga used Bloomline’s pioneering Omniwave speakers to achieve a similarly dreamlike effect. Conceived as a sonic reflection of the building’s architectural makeup, the speakers—which disseminate sound almost spherically, thanks to their convex membrane—were utilise in performances by musician Lucio Capece throughout Sónar+D; the sonic experimentalist improvising collages of recordings made inside the Pavilion on the days prior.

Space is again important in the 2016 intervention from New York sound artist, Tristan Perich. An installation comprising 1,500 individual speakers across a seven-and-a-half-metre aluminium panel, Microtonal Wall emits a single sound from each, its listeners experiencing a shift from noise to tone as they approach and move around the work. Previously installed at New York’s New Museum and Museum of Modern Art—as well as at the Ekko Festival in Bergen, Norway, and Toronto’s InterAccess—Perich’s work was followed in 2017 by another custom-designed loudspeaker system, this time in the shape of fellow American Mark Bain’s ‘virtual sculpture’, Wave Shift.

Using micro-vibrations that travelled through the materials of the Pavilion, Bain used Mies’s building as the conduit for his sonic investigation. Designing submersible speakers placed in the external reflecting pools, ripples in the water created a visible representation of the sound collected from passing waves through the walls within. 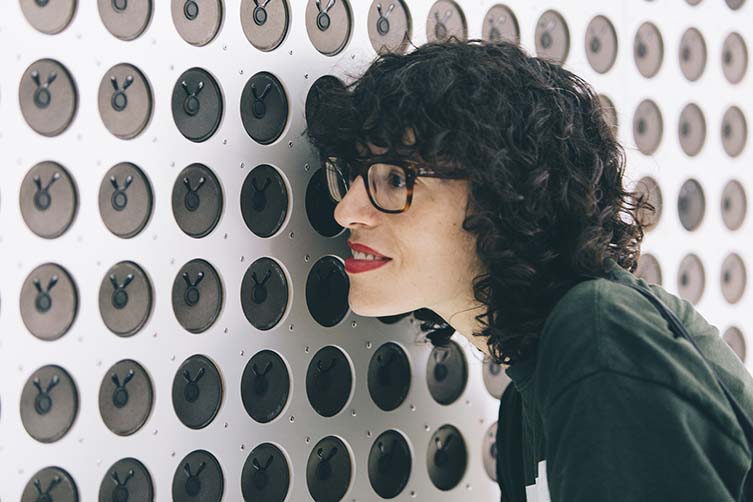 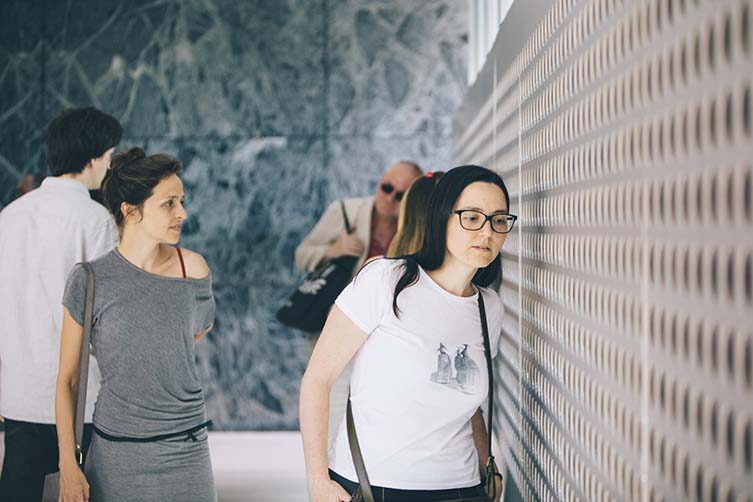 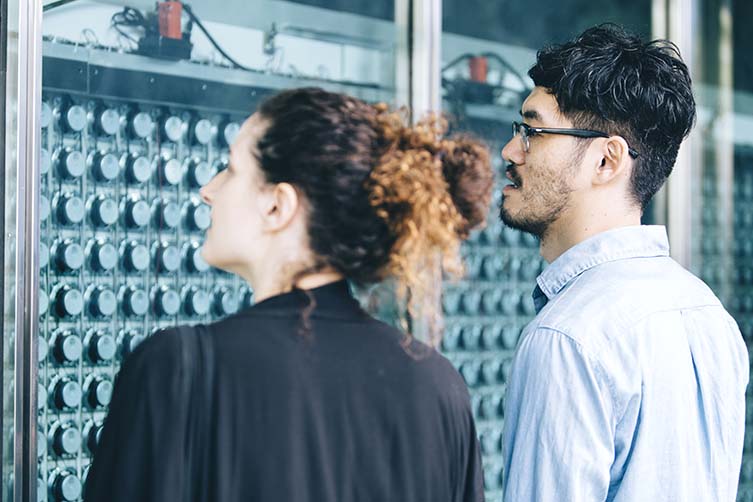 Skipping a year in 2018, SonarMies continues this summer with Dazwischen, a site-specific performance by Colombian musician Lucrecia Dalt. Again using Mies van der Rohe’s iconic architecture as its starting point, the work proposes to turn the influential modernist masterpiece into a ‘speaking entity in which different voices converge’. The geotechnical engineer’s delicate and other-worldly ambient experimentations a fitting match for the sublime space, the intervention—curated by longtime SonarMies curator, Lluís Nacenta, in collaboration with Sonia Fernández Pan—will run between 18 and 20 July, and is set to continue a tradition of one of the world’s most progressive music festivals creating unforgettable experiences within one of the world’s most progressive buildings.

Dazwischen by Lucrecia Dalt is presented by Sónar+D and will take place at the Mies van der Rohe Pavilion, Barcelona, between 18—20 July at 22.30 each night; admission is free with any Sónar ticket, Sónar+D Delegate Pass, or the ‘Amic de la Fundació Mies van der Rohe’ annual pass. Tickets are available now from sonar.es and sonarplusd.com. 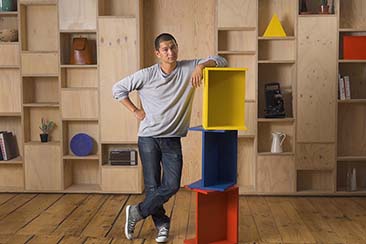 It may have only been operational for 14 years—transitioning between Weimar, Dessau, and Berlin—but 100 years since it opened, the impact of The Bauhaus resonates as strongly as ever. The enduring influence of the teachings that shaped modernism...