Calling all young and gifted creatives! Don’t hide your light under a bushel, dreaming of what might be… It’s your time to shine! This summer, #shinebrightstudio is where it’s all happening for the country’s stars of tomorrow. Following the success of last year’s pop-up from the folks at Glacéau vitaminwater, #shinebrightstudio is back and on the look-out for the next generation of creative talent – and providing plenty of inspiration besides.

Brick Lane is one of London’s most vibrant creative hubs, and for seven weeks the loading bay of its iconic Truman Brewery is playing host to a place to exhibit, create and be inspired. You could be among a select crowd of emerging talent enjoying exclusive opportunities to work alongside some of the biggest names in the entertainment and creative industries, and when we say big, we mean music biz titans James Lavelle and Rob Da Bank, singer-songwriter Foxes, the fashion world’s Agi & Sam and Tatty Devine, Jamal Edwards from SBTV, creative startups guru Doug Richard, and art and design talents like Lauren Baker and Isabel and Helen. Joining the established creatives offering inspiration are East London-based Bread Collective, whose Razzle Dazzle installation sees WWI warship-hiding technique dazzle camouflage used to very modern effect – with a selfie-surprise revealed when using a flash. We caught up with the Bread guys and gals for a quick chat… 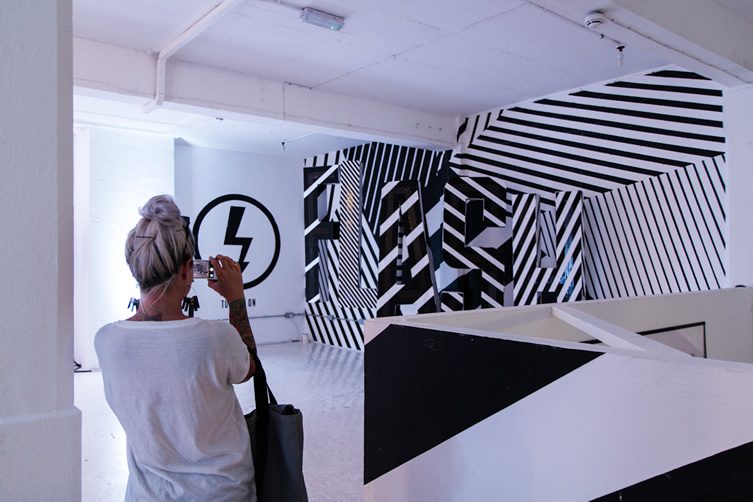 The dynamic of Bread Collective seems more familiar to that of a design studio – especially given its size – but you seem so much more than that. Can you tell us a little about how you work…

We originally met each other whilst studying at university and continued working with each other on self-initiated projects. It was two years ago we officially started the studio and started to work together full time. This friendship has remained at the core of how we run our studio. We have all come from a variety of different creative backgrounds from graphic design to illustration and find that our most exciting work comes from this cross pollination of ideas, and having people from different disciplines working on a specific project. Having people that have a broad skill-set gives us more confidence when taking on challenging projects – and allows us to solve problems that we previously hadn’t encountered.

Dazzle camouflage seems to be making a bit of a comeback of late – how was the Razzle Dlazzle concept born?

We’re massive fans of camouflage in general, but ‘dazzle camo’ has been a favourite for a while. We love the bold geometric shapes and clean lines, it’s also great to hand paint. The brief from vitaminwater was to create an interactive installation that would fill the #shinebrightstudio space. In the past we’ve focused on hand-painted 2D graphics, so we knew this project was going to push us outside our comfort zone. We had recently visited our friend Daniel Harris at The London Cloth Company who had been using 3M reflective thread in woven fabrics, and it was a material that instantly got us thinking of a way to incorporate it in to a project.

After some research, we found 3M reflective material was available in a tape product and from there we thought about constructing patterns which led on to dazzle camouflage. The interactive element came from hiding large 3D letters in the patterns and inviting people to photograph the installation with a flash – which, in turn, would reveal the hidden word. The installation was part of the #shinebrightstudio so the flash effect fits really well. 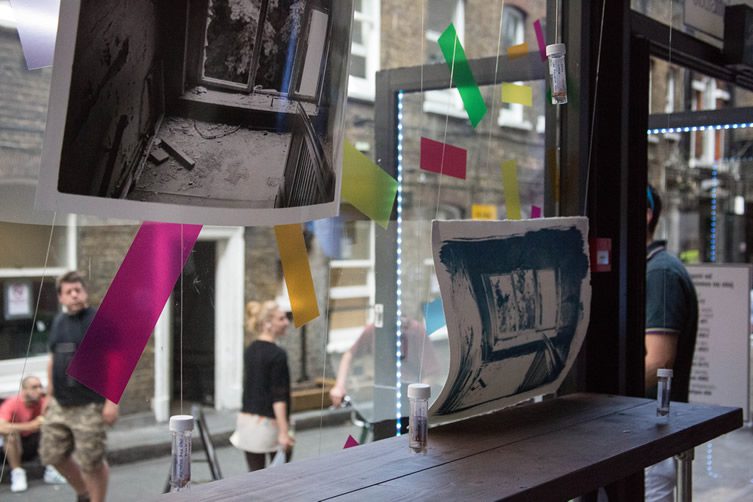 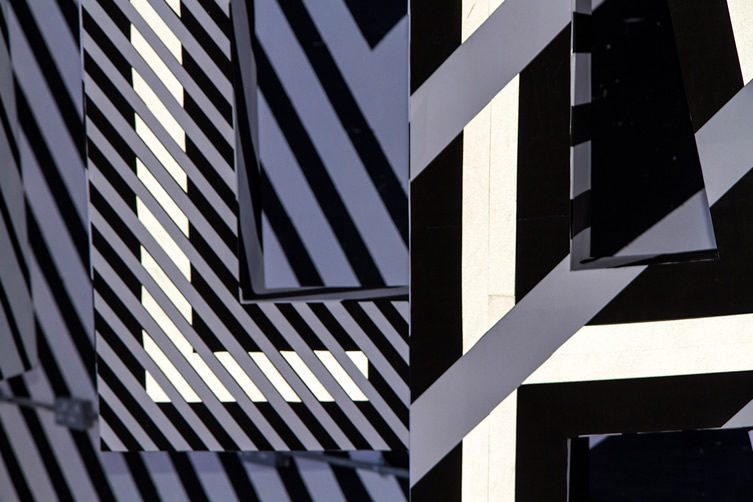 What’s the reception to Razzle Dazzle been like so far?

It’s been really great seeing the way people interact with the piece. Often at first people are a bit confused at what they’re looking at, but once they follow the instruction to take a picture they instantly get it. Even for us it was a a great relief that the installation actually worked, we hadn’t tried anything like this in the past and didn’t have much time to test the way it would work – so when it was all finished and we could see public’s positive reactions, we were delighted.

How has it been working at the #shinebrightstudio? Are there any other creatives you’re looking forward to seeing?

It’s been a great experience for us. We often work outside so to be in a nice clean gallery space with unlimited vitaminwater has made the whole process very pleasant! Yes, there are some really great workshops coming up: we can’t wait to see James Lavelle talk, and have been big fans of Christopher Raeburn’s clothing for sometime. We feel very privileged to be in such great company.

You’re based in East London, working on a project in the heart of East London – how does East London continue to inspire so much creativity?

Most of us have been in East London for almost nine years now, and still find it interesting and exciting. I think the way it’s always changing and evolving inspires. Areas that were once unloved and derelict are now thriving with creativity. It’s a great place to have a creative studio, people are open to you trying new things and pushing boundaries. As long as there’s this openness to new ideas, East London will always be an exciting place to be.

www.shinebrightstudio.co.uk runs at the Truman Brewery, E1, until 10 September. 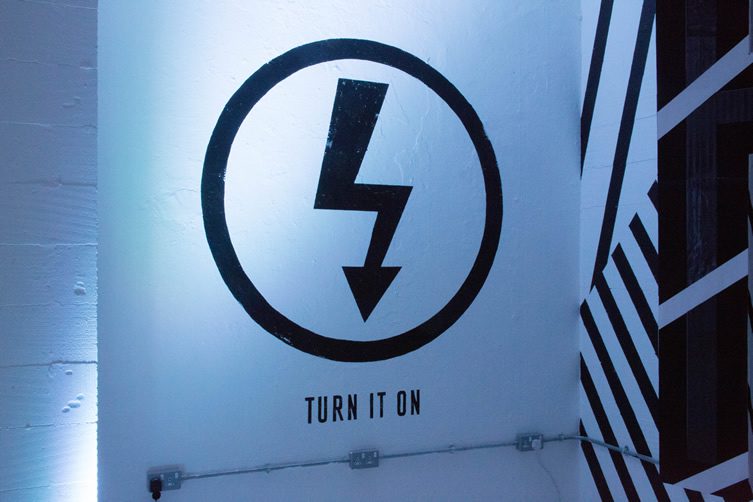 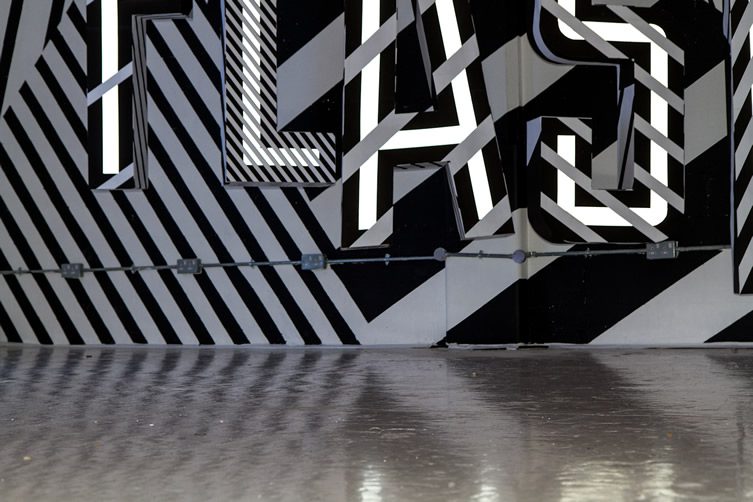