Marco Oggian is an illustrator, photographer, and all-round creative bod. Born in Italy, he now occupies a small studio in Spain where the food is good. He has a lot to say about what’s up with the world, and his observations, likes and dislikes about society fuel his imagination to create bold, colourful statement artworks. 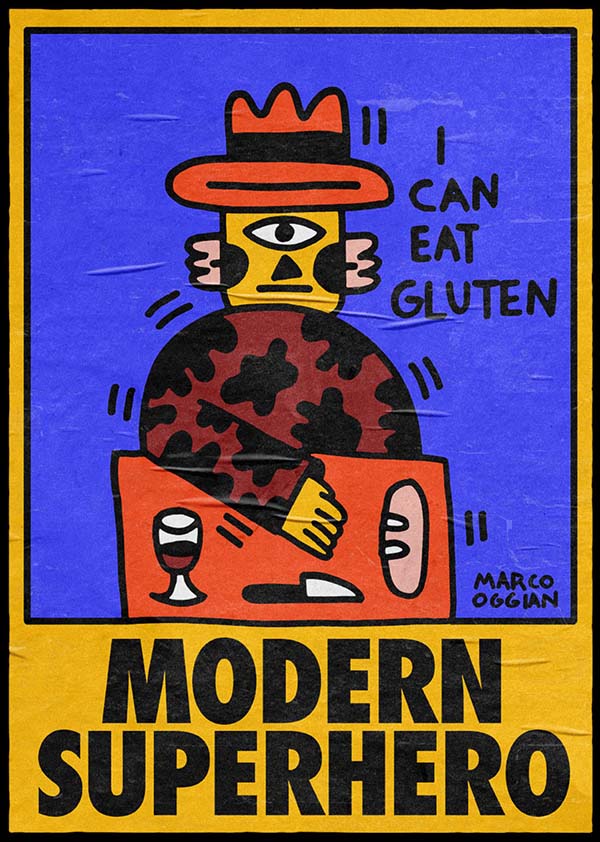 Influenced by everything around him, his work nods to pop art, street art and neo-expressionism. Keith Haring, Jim Houser, and Stephen Powers’s lettering spring to mind, yet Oggian wants his energetic approach to art to be accessible and for the masses. Adverse to snobbery in the art world, he’s open-minded and approachable. Yes he’s collaborated with super brands, painted massive-scale murals and worked on thousands of odd little projects in between, but it’s all the same to him. Creativity is creativity; leave the attitude at the door.

Intrigued by his signatures eyes, graphic compositions and views on society, we had to get to know Marco Oggian a little better. Read on to find out what he thinks of his fellow Italians, why his studio is essentially in his head, and what really ticks him off …

Are there any creatives through time who have inspired your work?

As you can see in my work, there’s a Keith Haring soul. I’ve admired his art and philosophy since I was a kid. “Art is for everybody” he said. Unfortunately, we always forget and treat art and design as if they are something for the elite.

In addition to Keith Haring, I have another great teacher, it’s not a person exactly but a people as a whole; the fantastic Italian populism. It is so absurd and negative that it is almost sublime. I’m always very critical in my work, I always joke about the negative sides of society, and for me this (unfortunately) is gold. 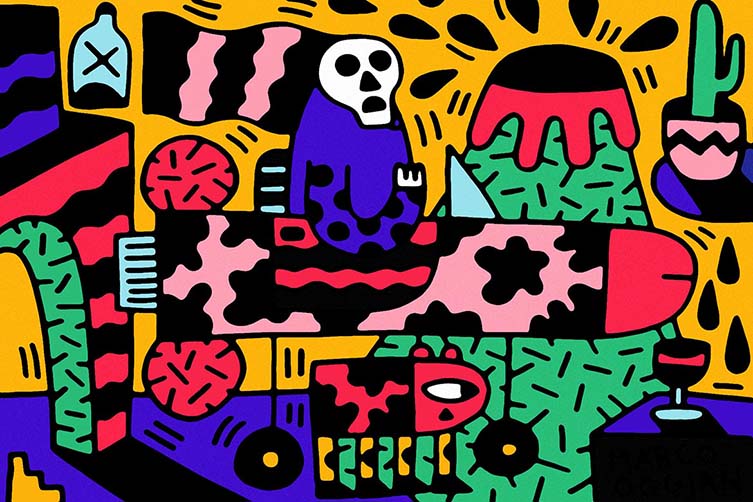 Where did you learn your skills? Did you go to art college?

Yes, I did just one year of art college, but then I got expelled. I could say that all I know, I’ve taught myself but this isn’t 100% true. I have to thank the millions of YouTube tutorials, they have been my ‘real’ teachers, and I never want to stop learning. I want to go to bed every day knowing something I didn’t know the day before. 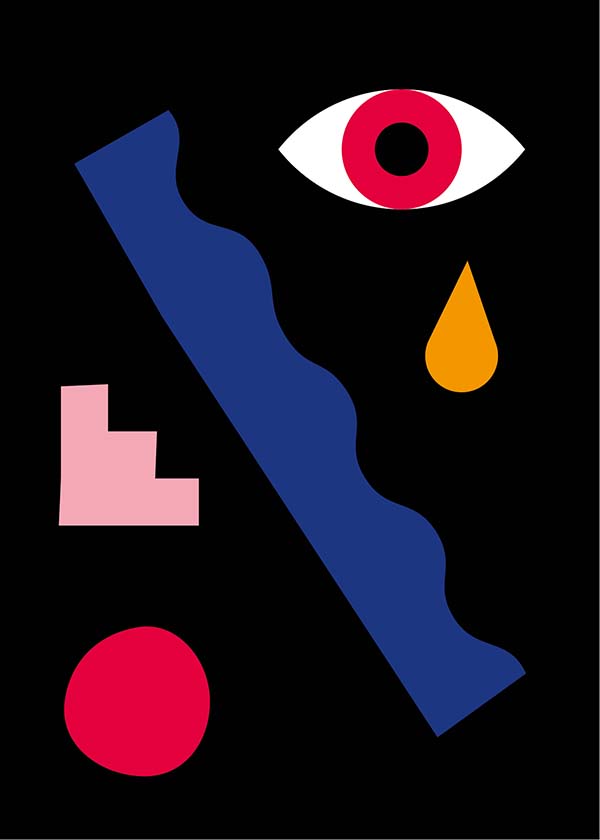 You were born and raised in Italy, so what brought you to Spain?

Basically, a job. I was living in Italy, working between Switzerland and the US and I got a great deal from there. I’ve always liked Spain, the weather, the food and the people, so I just told myself “why not?” After four years, I’m still in Spain with a beautiful girl, friends and thousands of new projects.

Can you tell us about your studio, where is it and what do you love/hate about your current locale?

My studio is where I spend most of the day. My studio is small and beautiful; it’s full of things, cards, colours, sticks, canvases, vases, lights and a thousand coloured boxes with lots of incredible things that I don’t even remember anymore. My studio is essentially my head, it can be a space, or it can be a beach towel or a van wandering around South America. My studio is always with me.

Regarding my current town, I love and hate her. I love her because the food here is amazing and affordable, the local beer is fantastic, and there are a lot of new things to do. I hate her because it’s [La Coruña] the city of Spanish fashion, so there are a lot of douchebags. But these people inspire me a lot and are a great reference point for me. I can say with almost complete certainty that for me love and hate are at the end the same thing. 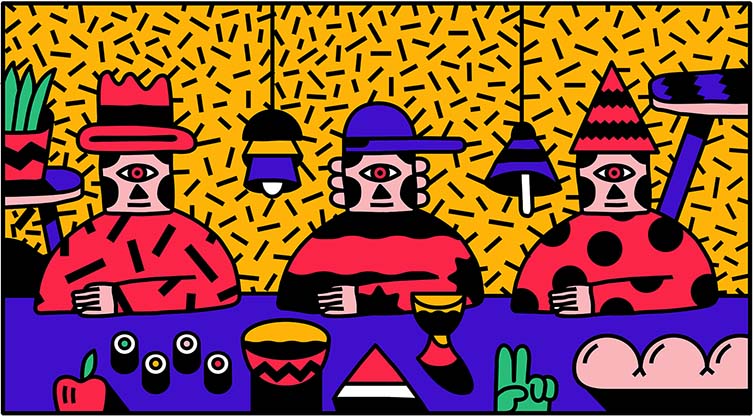 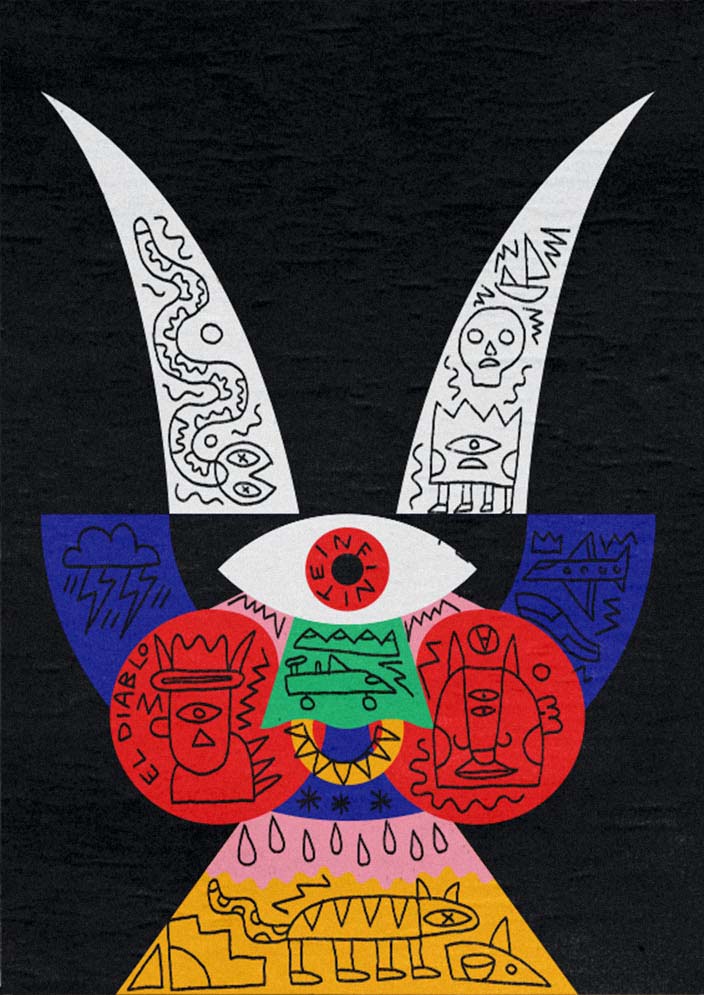 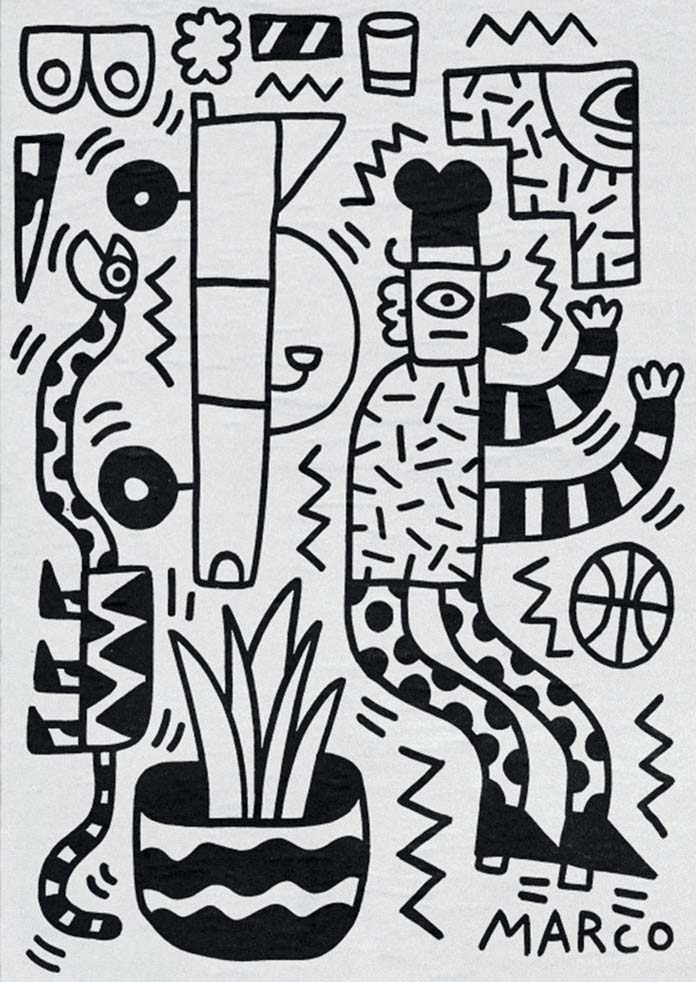 How do you visualise your work? Do you start with sketches? Talk us through your process …

Yes, I usually start with an initial sketch. I do a couple of corrections and then start with the real work. I like to improvise, especially when I work on surfaces as big as walls. I’ve never written anything; when I make mistakes, I like to correct them on the spot.

You’ve collaborated with many big brands, can you tell us about some of your favourite commercial projects?

That’s a hard question because I like to do everything. I really can’t think of a favourite commercial piece. You know, in the end, it’s just us who decide what’s beautiful, not the situation, if we’re happy with ourselves we could be with everything around us. Every project is full of negative feedback, and often we get frustrated, however, if we can turn those criticisms (very often useless) into positive thoughts, we would be able to see everything in a better way and live easier.

Having said all that, putting these very Zen thoughts aside, working with Nike was a blast—and those guys have been so kind. I thank my agency Pocko for the excellent coordination. The Firefox campaign was another entertaining job, and the Mad Perros Pizza job in Japan was also such a great project … it made me want to live in Japan.

You work across many disciplines—from illustration to animation, typography to art direction—what’s your favourite medium or method of creating?

It depends on the moment. As I said before, I like to learn something new, so when I have the chance, I always try to change. For me, being versatile in the modern creative world is quite essential.

As a visual creator, do you have a message? Are you trying to say something to the world?

Absolutely, otherwise why are we doing it? 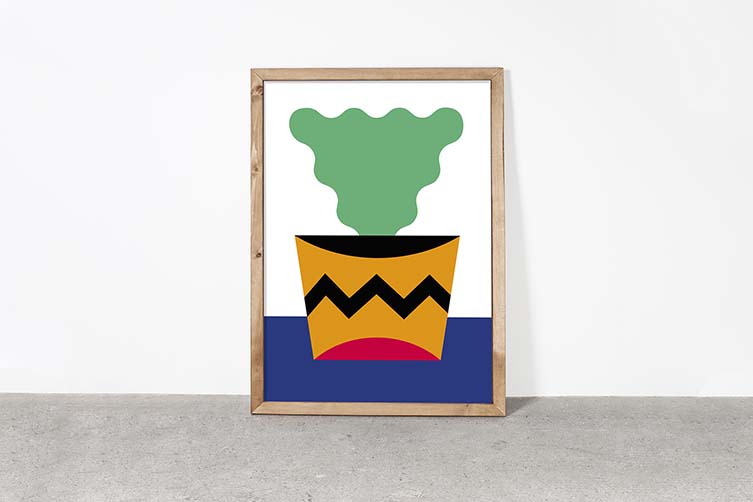 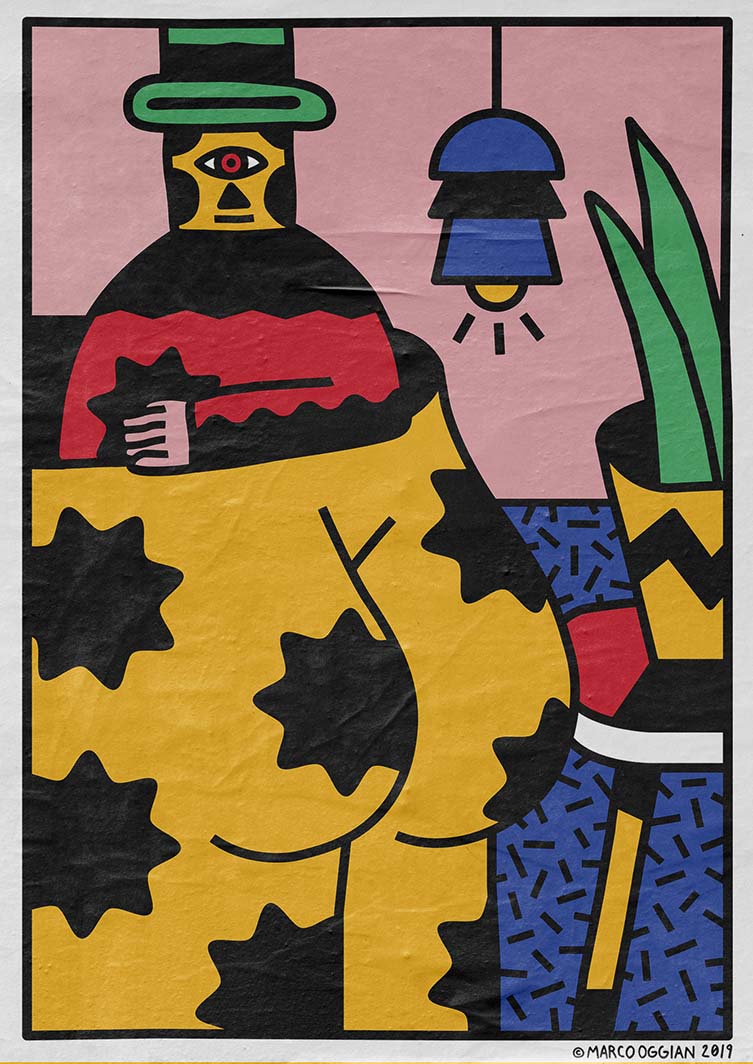 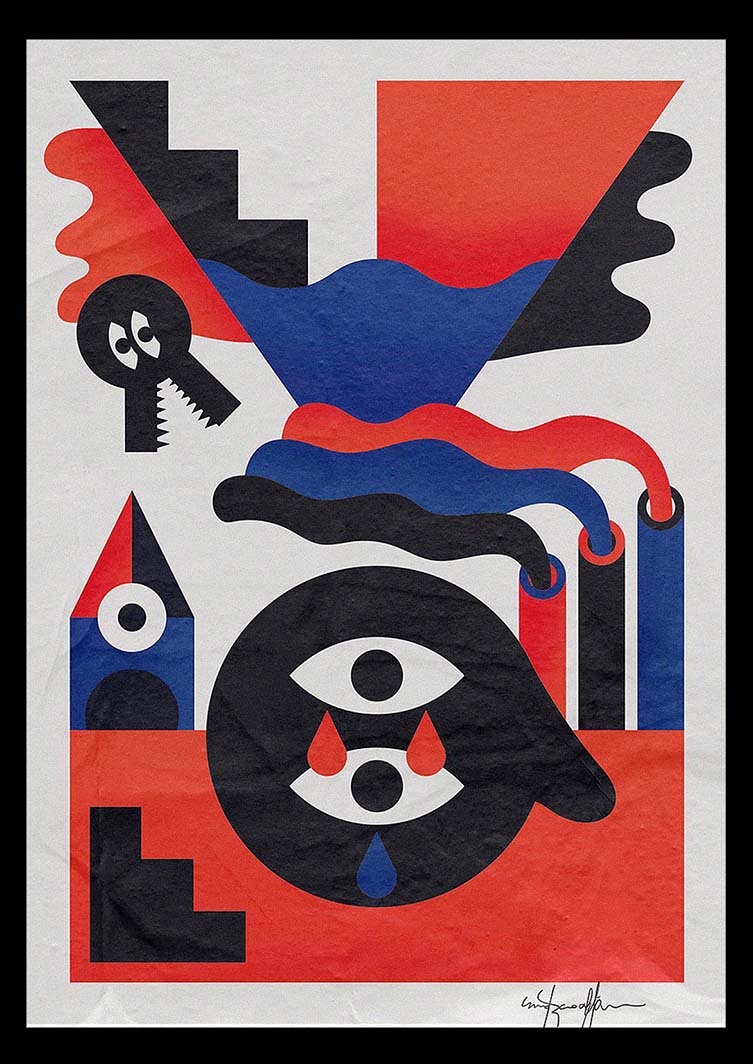 A cheeky bit of humour and not taking life too seriously seems to play a part in your work, so how important is this aspect in what you do?

It’s hugely important to me. I’m not a doctor, I’m not saving lives, nor am I changing the world. So, designers and artists from all over the world, get down off your high horses and remember that you are people who are born and die, just like all the people in the world. I do not have time to take myself seriously.

Eyes feature in a lot of your work, what’s the significance?

Eyes never lie. We can understand a situation, a person or a circumstance by merely looking into their eyes.

My eyes are glassy, they say everything and do not say anything at the same time. They are apathetic eyes, without a soul and this is further criticism of modern society: we have everything, but we don’t get excited about anything.