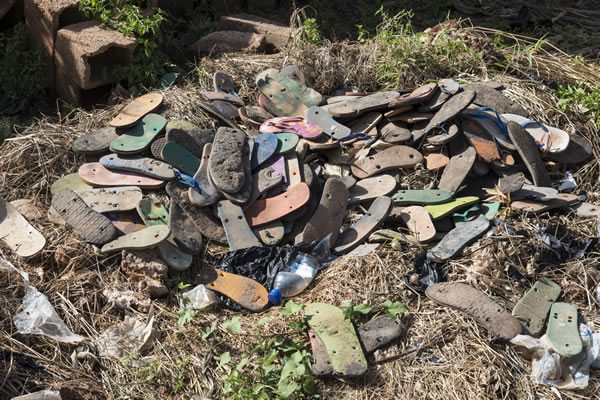 I’m not here to tell you the answer to any of those questions is positive. However, after asking Christophe Machet about his work I’m also ready to say that perhaps my own answers aren’t as despairing as they would have been beforehand. Maybe, I’m thinking now, the questions are wrong. Maybe we should ask: how much fun is sustainability? What can we do with all these things we’ve made that aren’t going to disappear? What amazing things, that is, can we do with thousands of discarded flip-flops? If you’re Machet, the answer is quite a bit.

‘I’d finished a big project and was invited to work on a project with Hors Pistes [a project that works to bring designers into contact and collaboration with traditional craftspeople around the world] on a creative sustainability/recycling project. They put me in touch with Maurice Nagalo in Ouagadougou, who’s a like-minded local designer and entrepreneur. Because of the pretty extreme heat and heavy rains in the area the idea of a roofing surface came very naturally, and doing so from recycled materials was obvious. And flip-flops turned out to be one of the most plentiful unused waste-materials — if we were able to collect all discarded pairs we estimate we could cover more than 100,000 square metres! From there the production and aesthetic approaches were dictated by what we were working with.’ 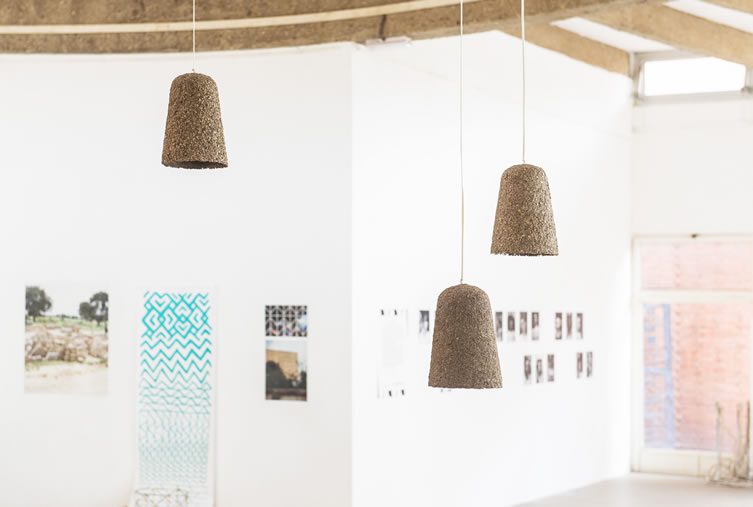 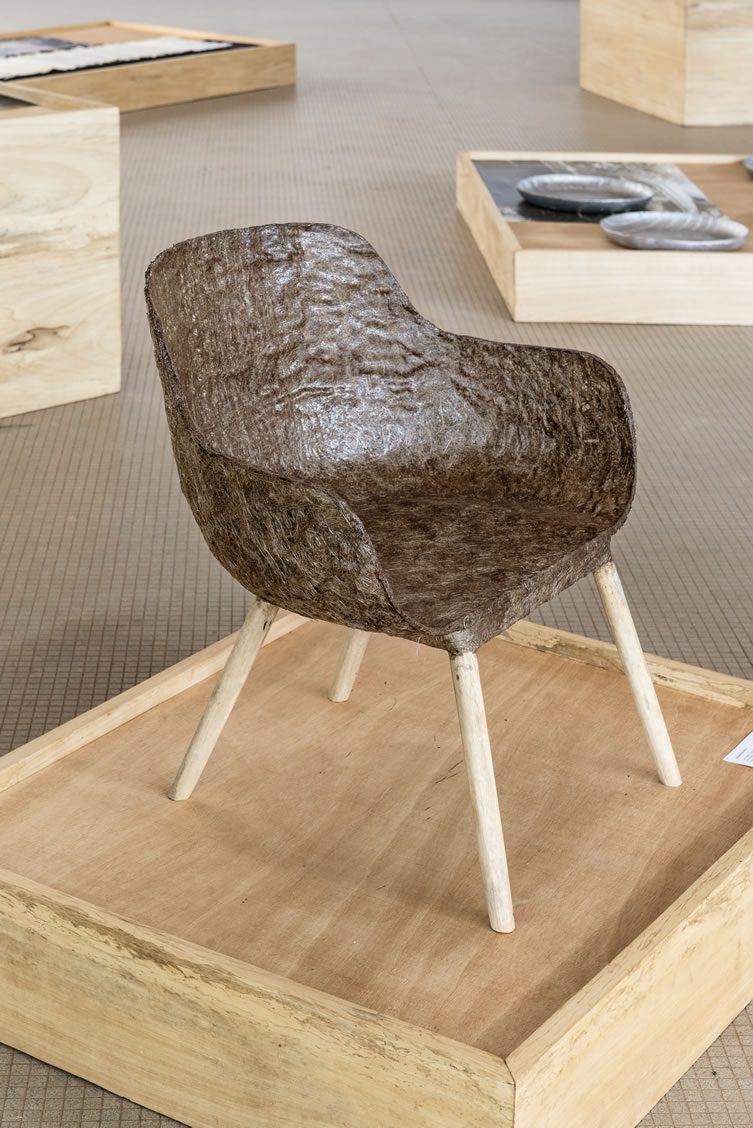 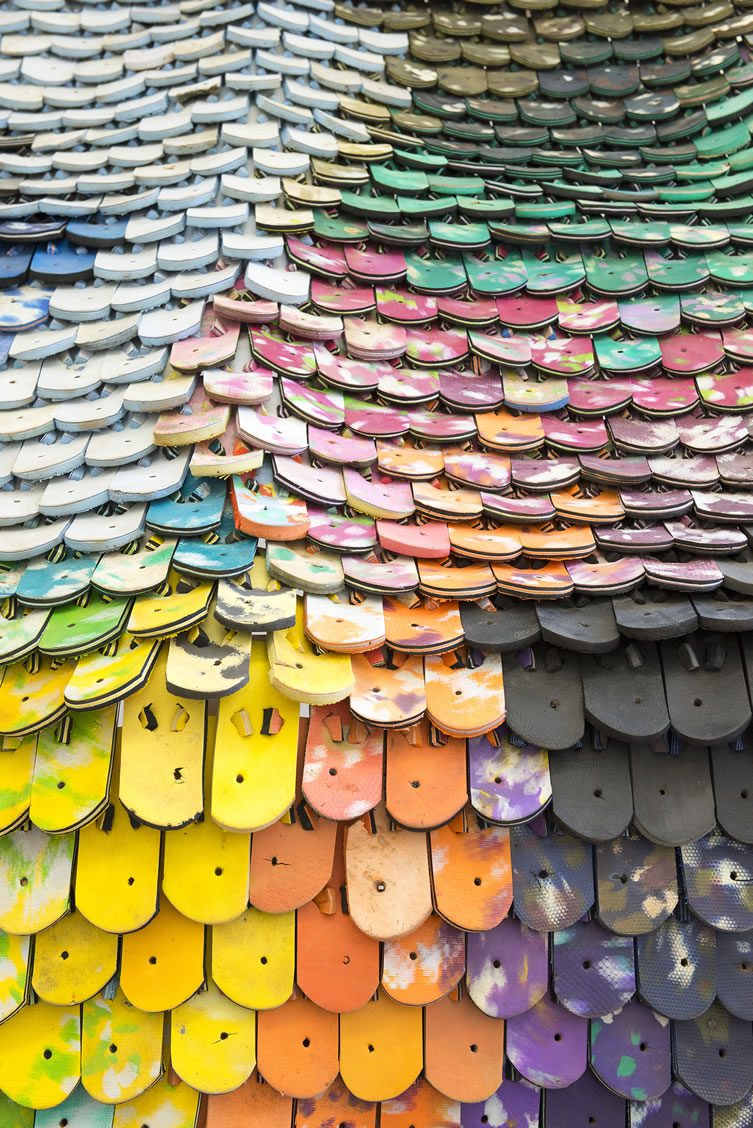 And that’s how Toiture came about: design/art with visual appeal and social usefulness, it’s a perfect synchronicity of thoughtful organisation commissioning, international talent and local endeavour, imagination and pragmatic know-how. An aesthetically beautiful and ecologically creative answer to a local need, it also demonstrates how these things can work economically. 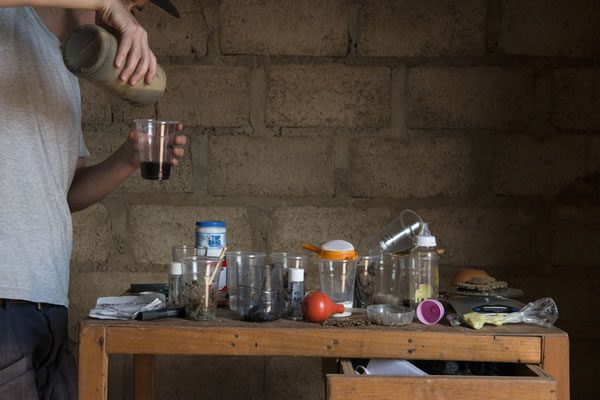 ‘I was expecting dumps to be mountains of usable trash like we often see on TV,’ Machet tells me, ‘but in fact most usable material had already been extracted and never in fact gets to the dumps. Flip-flops were the exception, but as soon as I started collecting them the locals noticed my interest. The next time I came around the prices were a bit higher! It shows how waste can come to be seen as a valuable resource.’

The provenance of Machet’s practice is quite varied. He now thinks of himself as a designer, in a complicated way, but he started out by training as an engineer, and the combination of imagination and practicality sings in every corner of his output: the Polyfloss Factory, for instance, is his imaginative response to the fact that reclaimed metal and wood are ubiquitous, whereas nobody had seemed to find a creative and useful deployment of the discarded plastics that surround us. 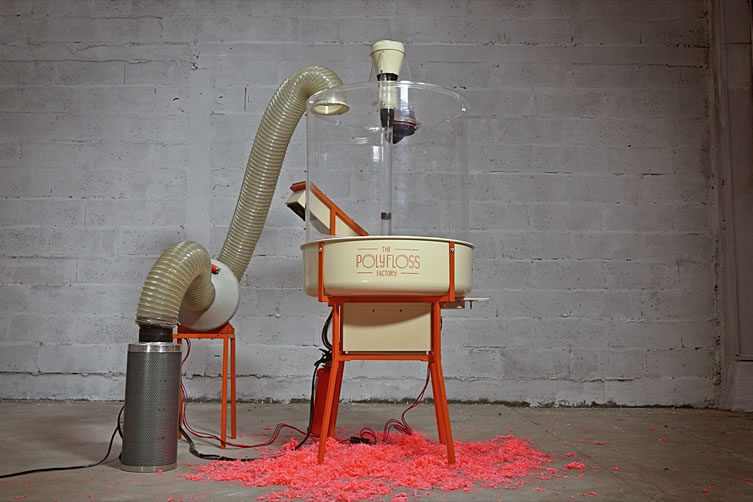 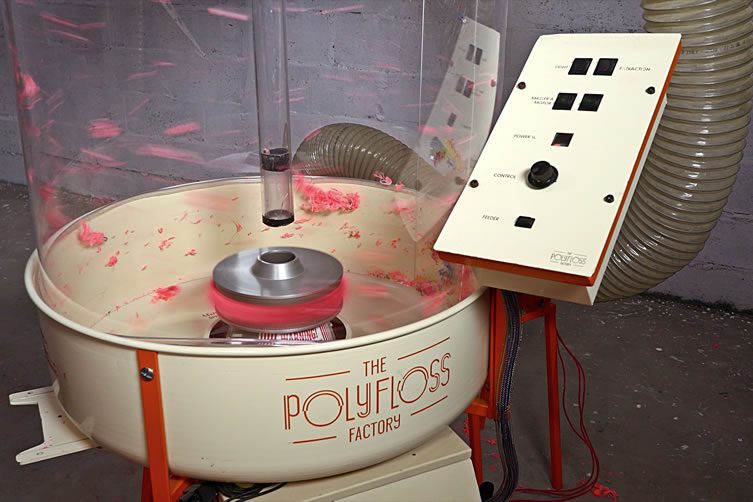 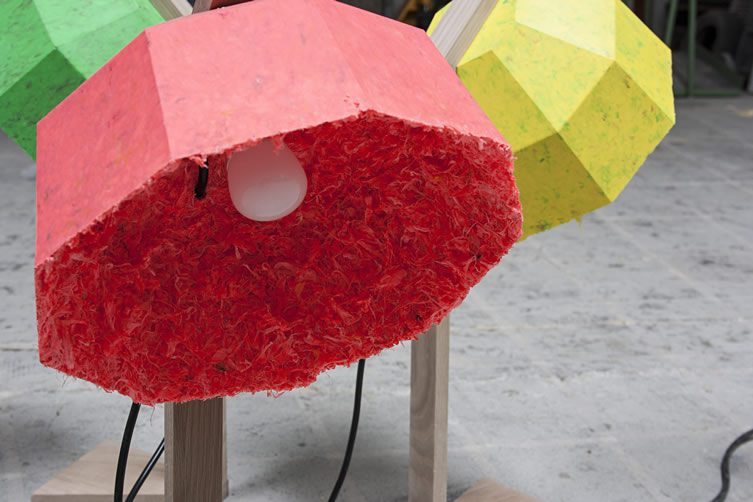 ‘Basically, my three collaborators and I noticed that metal or wood are quite easily transformable,’ he says, ‘but plastics are harder to re-use. So Polyfloss is the first attempt to design a process to enable craftspeople to use this resource.’ It’s not simply practical, however. ‘Plastic is an incredible material that mostly is just discarded — take the plastic cup, for instance — so with Polyfloss we found a process a little like that used to produce glass wool and cotton-candy through centrifugal extrusion. It’s compact, easy to operate, visually striking. Plus, the materials it produces are really adaptable for uses like packaging or insulation, so it’s massively adaptable.’ 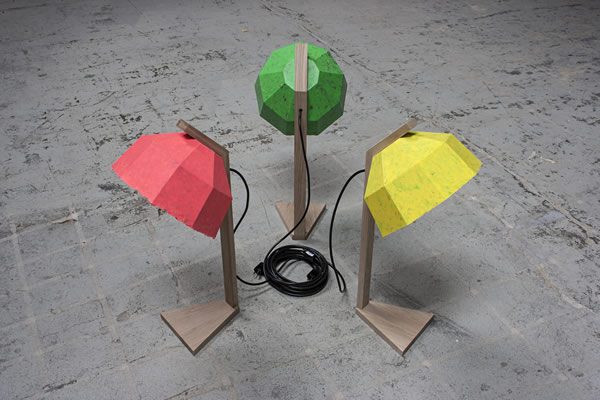 The idea has had huge appeal, leading to collaborations with the Architectural Association’s ‘Design+Make’ programme, recycling local plastics on-site for the students’ use, and with Bloomberg on their London HQ, where an installation was made using the plastic from the firm’s old keyboards. Working with large and prestigious organisations must be both encouraging and dispiriting, I suggest, showing at once the scale of the problem and also how much can be done by people in the right places.

‘The real challenge is to get people to stop seeing waste-products and instead to see resources, and that’s what Polyfloss is all about. And working with these organisations helps me to develop a network that will help me and other people understand the issues more deeply and also to inspire new projects. There’s huge potential for scaleability once a project has shown its practical applications and potential, and once it’s come to the attention of the right industry.’ 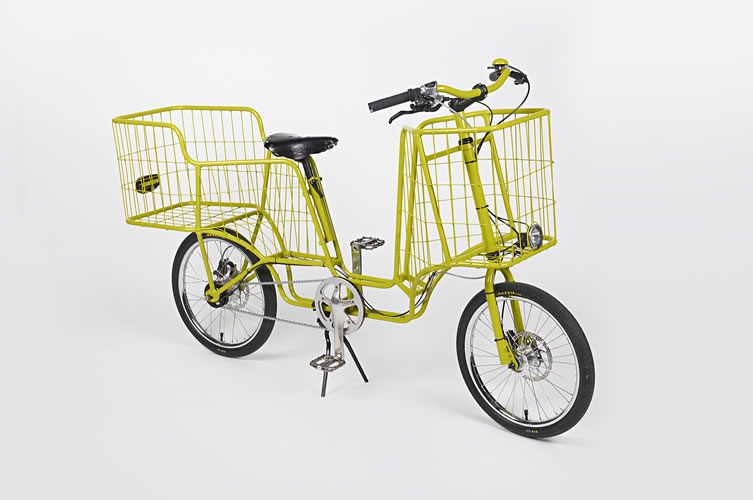 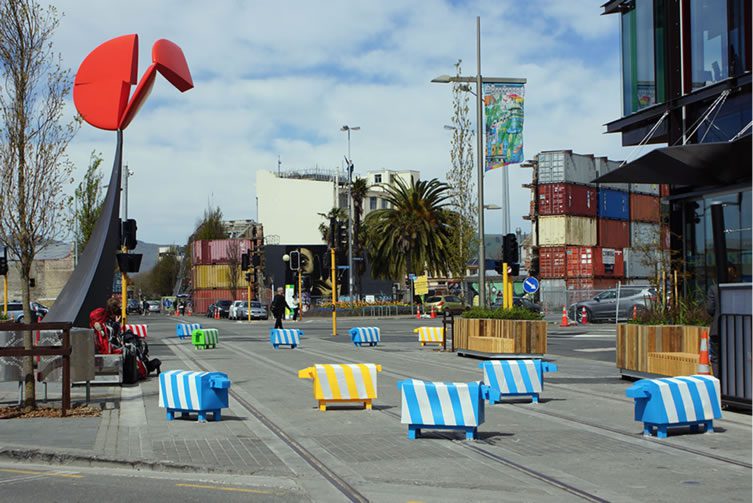 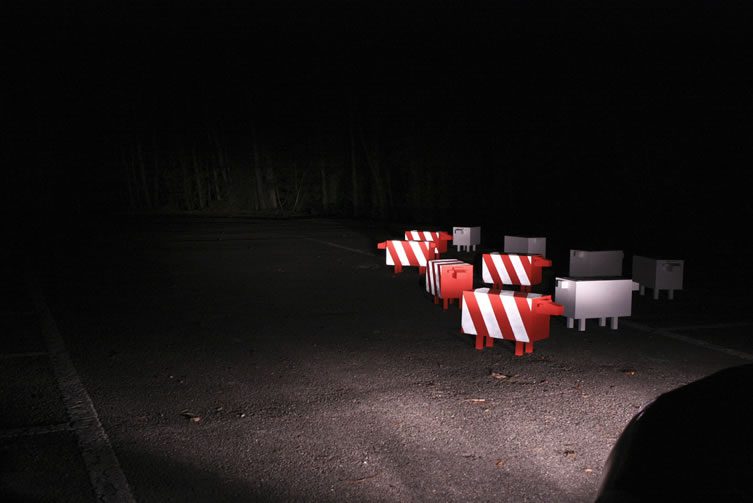 Looking at the range of Machet’s work — from recycled plastics made into large plastic speed-deterrent sheep to Camioncyclette, a bicycle whose carriage-capacity has been increased to the point that it’s almost a basket on wheels — it’s heartening to think that there is so much canny creativity and design-nous being directed at practical ecological issues. As a last question I ask him about his distinctive combination of irrepressible fun and ecological seriousness: it’s the first thing that struck me about his work, and he seems to connect with the observation. 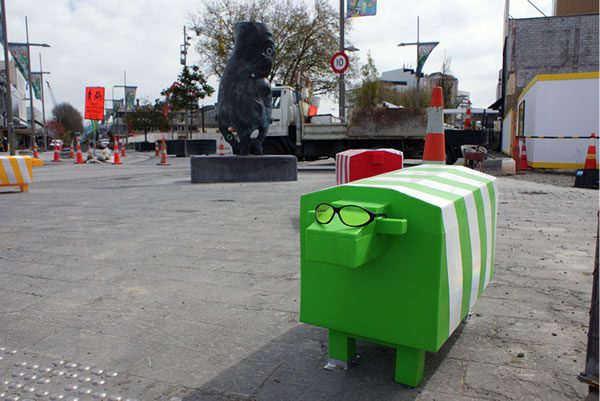 ‘I couldn’t agree more that that element is central! I truly believe that the fun one is having creating an object is directly displayed in the object. That’s what makes it feel effortless, natural and attractive, and so when I’m struggling with a brief I try to remember that, even at the worst of times, this is something I love. It’s FUN. It’s EXCITING.’

He admits that there are lots of problems, and that they are getting worse in some ways, for instance with the internet encouraging wasteful purchases and a lack of awareness. But if there’s anything that can save us from ourselves it’s gifted, well-intentioned people engaging creatively and thoughtfully with those problems. We need more Christophe Machets, basically.