British artist Jon Burgerman has been gracing walls; screens; paper and merchandise with his doodles for over fifteen years. Nottingham-born Burgerman’s multitude of characters — entangled in all their silliness — are bursting full of fun; lucid; amateurish in its aesthetic. Boldly colourful. It always demands further eyeballing — with just so much going on, each line depicting dynamic forms, hairy faces to trucks, bunnies to pizza slices. Happiness is the underlying theme, but not the sticky sickly type, there’s always a sprinkling of mischievous silliness. The key to his success? Approachability. 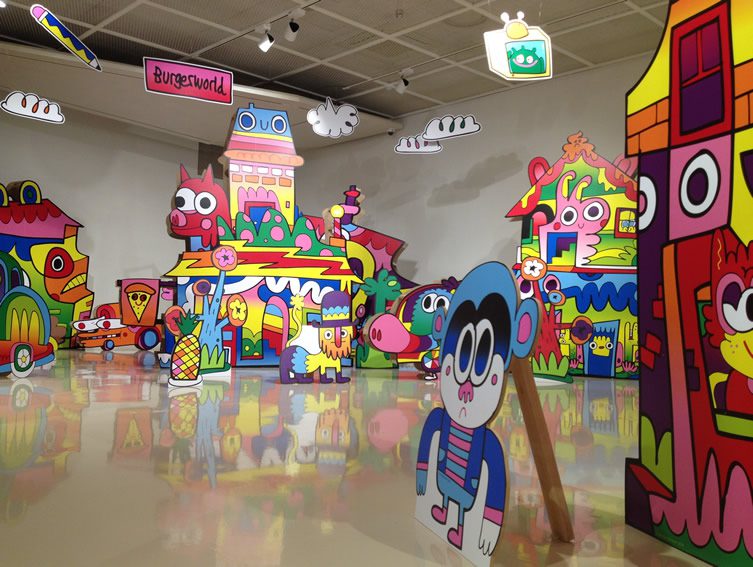 One of the first of his generation to embrace the world of online (Burgerman launched his website in 1999), this inevitably led to Jon selling merchandise across the globe — t-shirts; pin badges; anything you could place a character on. His collaboration with Kid Robot at the beginning of the vinyl toy boom saw him become not simply an artist, but a highly collectible one. Everyone wanted one of The Heroes of Burgertown. All encompassing, Jon’s work is a lot like being invited into his world. Always active as a multi-dimensional artist, covering all kinds of surfaces large to small, recent exhibition Burgerworld — touring venues in Seoul since the beginning of April — is a physical representation of a stroll through the doodler’s imagination, an insight into Jon’s imaginative mind where the viewer doesn’t just see his work, but can move through and amongst it. Lotte Department Store, Yeongdeungpo, will host the exhibition’s final instalment until 23 June.

We caught up with Jon recently to talk about his work; the early days; and what he loves about current hometown Williamsburg, Brooklyn… 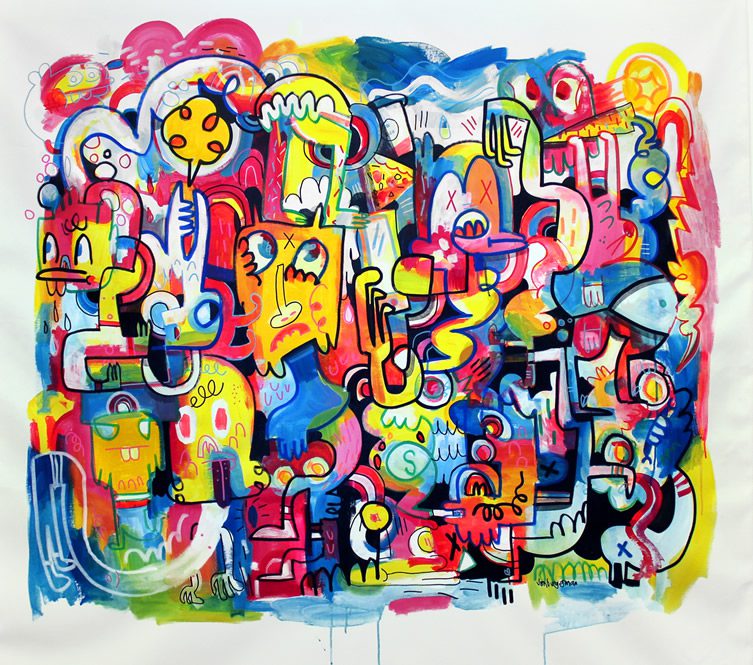 How is life in Williamsburg? What are your favourite spots in the neighbourhood?

Life is good when the snow clears and the tulips are in bloom. My favourite local spots include: M Noodle Shop on Metropolitan for the best steamed veggie dumplings I’ve ever tasted; Nitehawk Cinema for beers and tater tots whilst watching movies; The Blind Barber, a local café-bar that sells good donuts; Pete’s Candy Store, another good local bar; the farmers market on a Saturday at McCaren Park, for dog spotting and apples; Desert Island Comics for good, erm, comics — and finally, Crest Hardware for every hardware thing you ever might need, plus a pig called Franklin in the back yard. 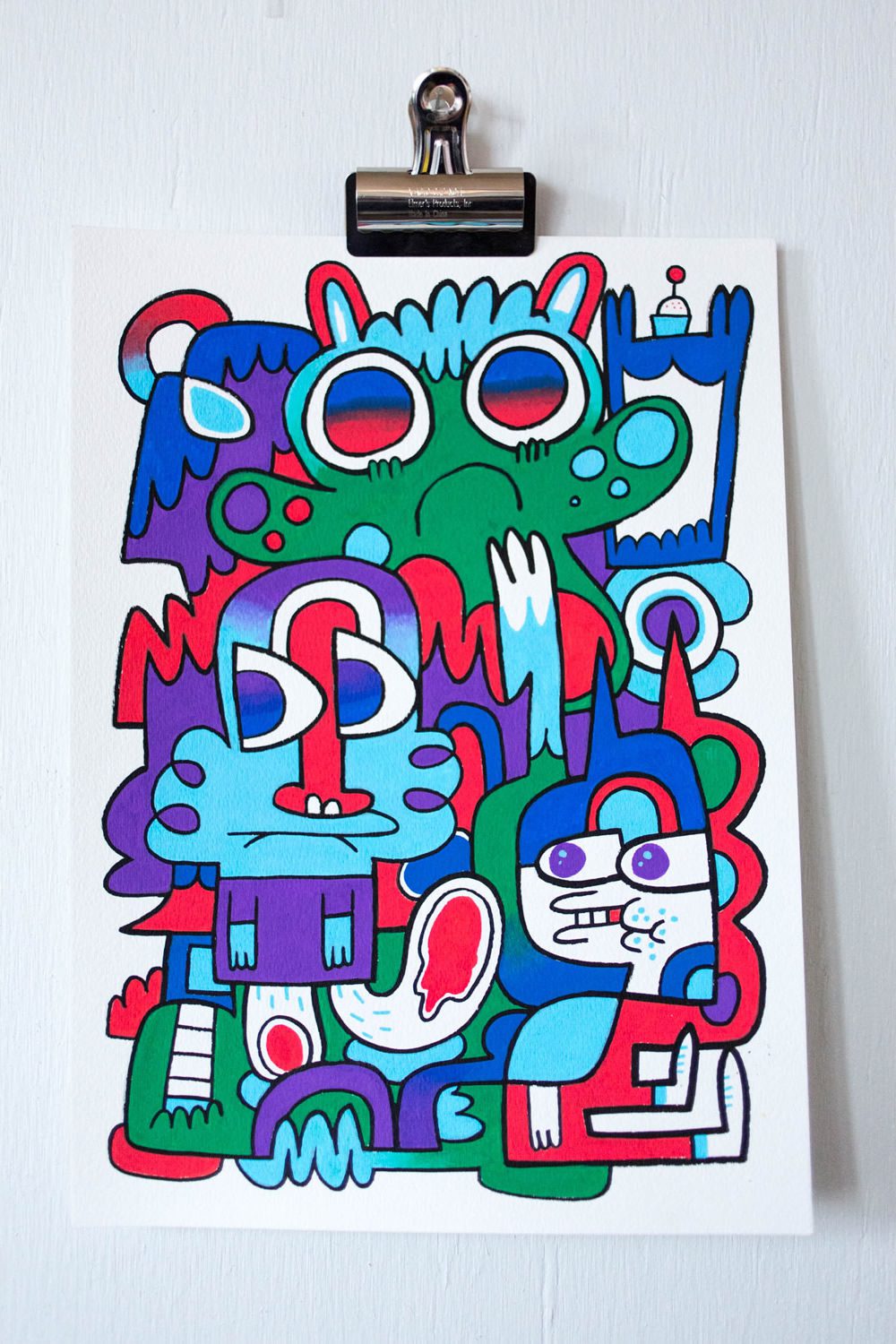 A ‘purveyor of doodles’, are you happy with the depiction or would you say you were more of an artist?

It’s not mutually exclusive. You can be a doodler and an artist. It’s one and the same! When I say I’m a ‘doodler’ it encompasses more than just quick, loose drawings. A doodle can be anything, from a drawing to a melody, to a sculpture or a piece of writing. The doodle is in how it’s been conceived; in a quick, semi-lucid, almost accidental manner.

You’ve now been a professional doodler for over fifteen years, what would you tell your graduate self if you could?

I’d say enjoy yourself more and worry less. There’s a lot I (we) worry about that’s well beyond anyone’s control. If you have youth, good health and relatively clear skin, and lots of energy, then everything’s already in your favour. I would also say don’t worry yourself thinking about what you suspect other people are thinking about you. It’s not important, and you can’t second-guess it anyway. Be good, have fun and always check the weather report before leaving the house. 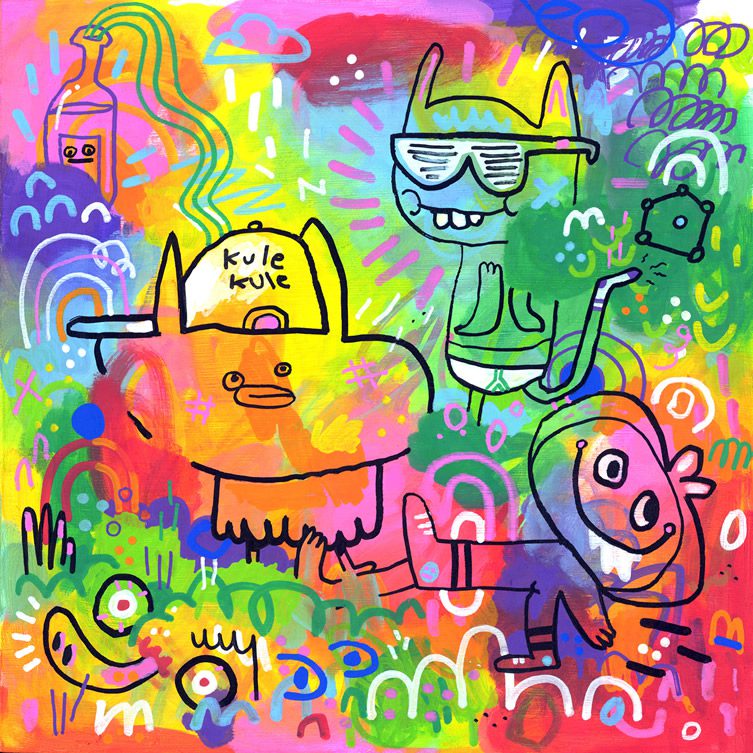 Tell us about your most recent show Burgerworld in South Korea.

The idea of Burgerworld was to introduce the Korean audience to the ‘world’ of my work. I wanted them to be able to step into the work, so we built an installation based on my artwork. It was meant to show that the work can exist in many forms, that it can come off the page, and that when you’re surrounded by artwork then you too become part of it.

Do you ever get told that your work makes people smile? There is a sense of joy in looking at your characters, is that intentional or natural?

Some people tell me that and it is of course very flattering. I’m so lucky that people respond with a smile to my work. That’s amazing. I cannot decide how people will respond to my work. I can only make the work and characters as best as I can, imbuing them with my own thoughts and emotions, and hope that they resonate with others.

I would suggest that you were one of the earliest pioneers of online self-promotion and retail — whereas other artists/illustrators/creators took a little while to get online and establish themselves. Would you say that helped you in your career, the embracing of new?

I’ve always been open to working in new ways. When I was at university in the UK I was taught how to make a simple website, I knew it would be a useful thing to learn — but I couldn’t have imagined how useful it would be. I purchased my domain name in 1999 I think, I was probably the first student on my course to do that. I remember a year later something on my site got really popular (I can’t remember what it was now) but the server I had it hosted on suspended my service because it was getting too many hits. I think it definitely helped my career. Whilst some of my peers were trying to show their work locally, I already had an audience spread around the world. 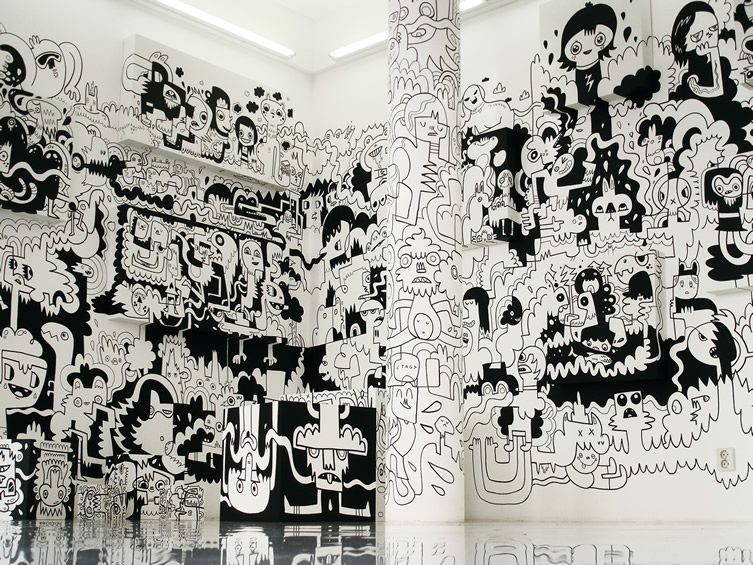 Can you tell us what your favourite character you have created is, and why?

I don’t really know, but I guess I have a soft spot for Coco Gulab Juman. He was part of my Heroes of Burgertown collection of toys made by Kid Robot. I like him because he’s so greedy and that he’s naked and the toy version of him had a little butt cheeks on the back. Recently I like Burgsy. He lives with me in New York. We hang out a lot together. 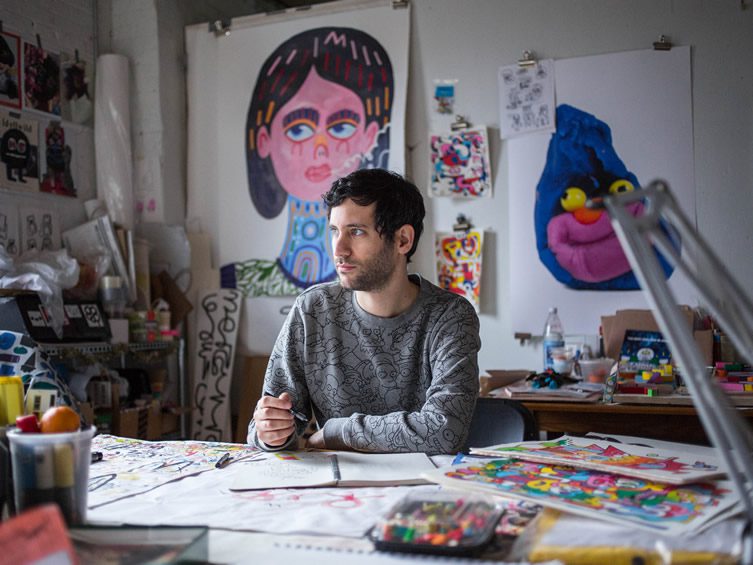 What are the most exciting things happening in the creative world right now? Are there any people in the field that make you think ‘wow, that is really cool!’?

Ha, I don’t know. There’s so much happening all the time it bubbles my brain. The last exhibition I saw that I really really loved was by Vakki at a gallery in Seoul called Daelin. It made me think ‘wow, that is really cool!’ There’s a room where you can dance and your movements are mapped to a weird Michelin Man version of yourself projected on the wall. I danced in there for a while and when I came out I accidently hit my head really hard on the low ceiling by the door. I can’t remember anything else now.

You’ve been creating a lot of large-scale physical work lately. Is this your preferred medium now?

Not especially, but I am interested in having the work live in different kinds of spaces, and having people being able to interact and engage with it in more directly. Paintings and drawings are great but they often sit in their space whilst we look at them from our space. I want to put the viewer into the same space as the art. 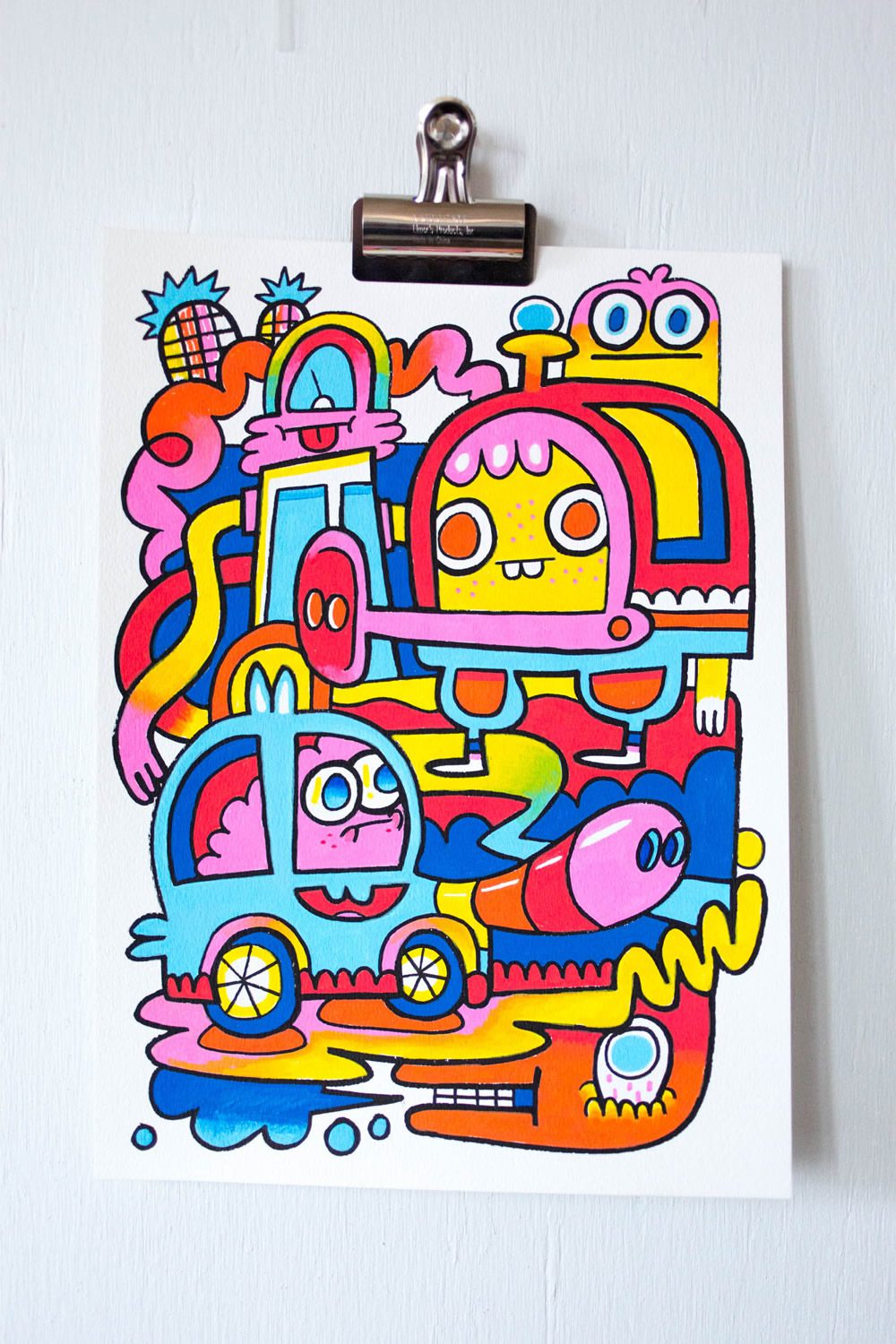 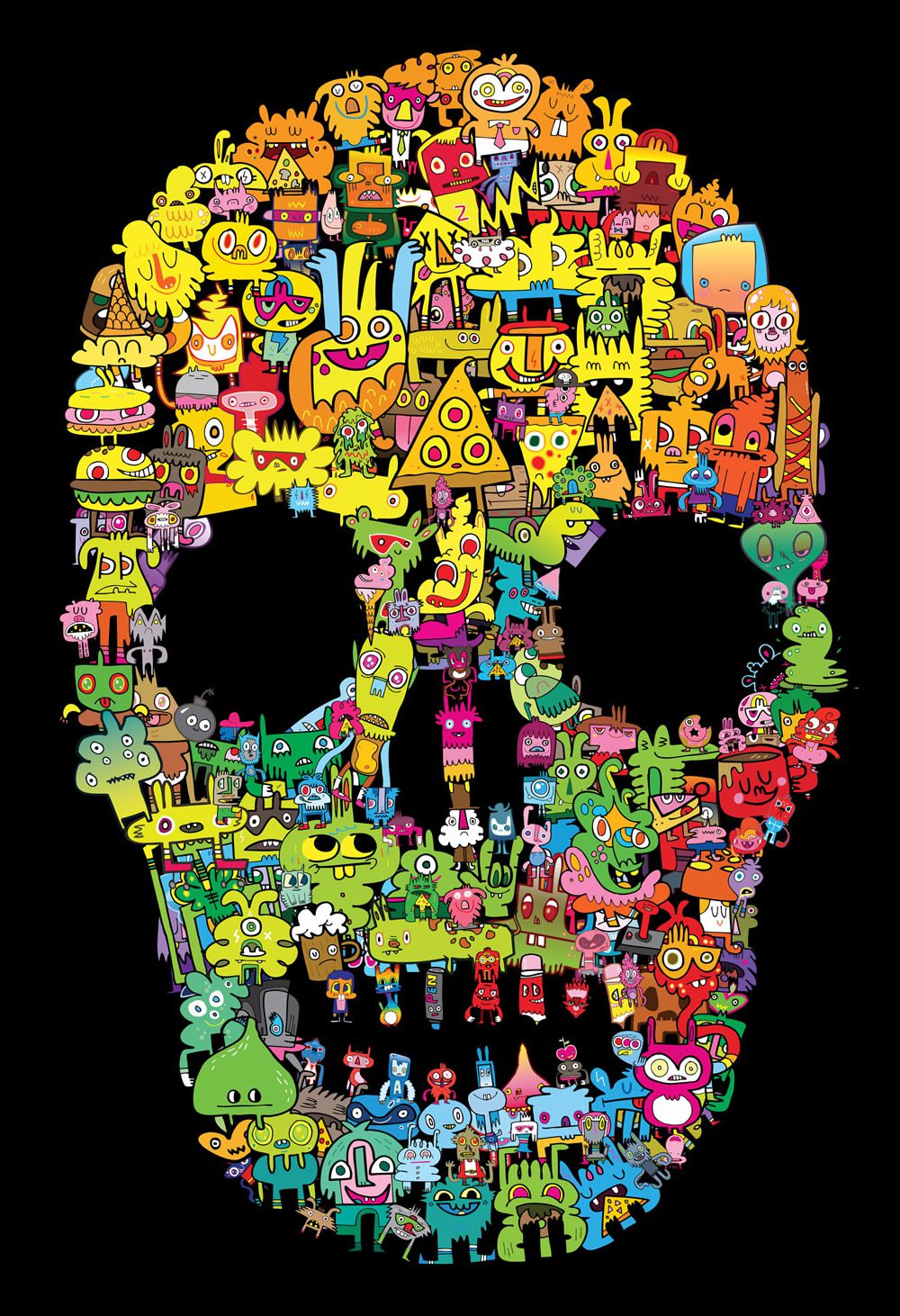 In a brilliant interview with The Great Discontent you say “there’s joy in amateurism”. I love that quote. It puts life and its very many self-imposed stresses into perspective. Are you still an amateur in life?

I’m an utter amateur in so many things. Please don’t tell anyone, but I still don’t really know what I’m really doing with my life. Although maybe that’s OK anyway, right? 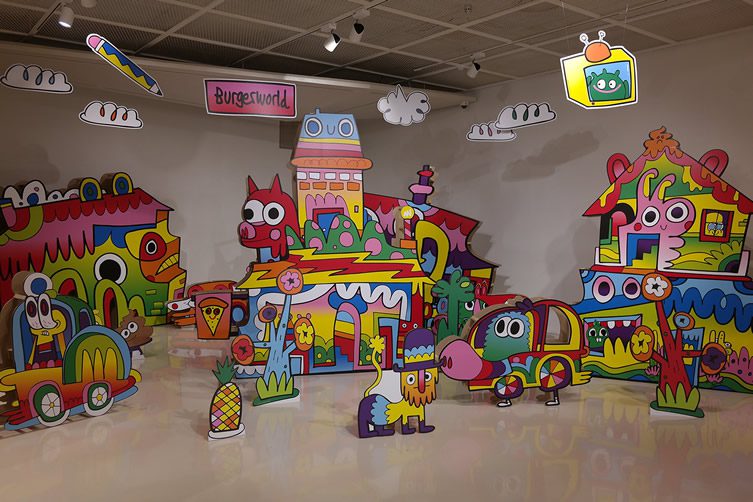 When not doodling what do you like to do? This question is kind of related to the first one, but I know you’re not a pre-programmed doodling robot, so you must do other things right?

Well a lot of my time is spent working — not art-making work, but logistical planning and paperwork… correspondence sort of work. A lot of my time is spent like that, but I wish I could just make art every day. When I’m not working at all, I like going to look at art. Or reading; playing; travelling; cooking; eating; sleeping; dreaming; dancing and sometimes stretching. I like doing lots of things, but it’s all connected to my work — because my work is so deeply rooted in my life and who I am. Making my work is a full time 24/7 concern. I don’t turn off in that respect. I’m fascinated and inspired by so many things. There’s always something I really want to make, which I think is a real blessing.