As Madrid-based indie rockers, Hinds, prepare to take on Barcelona’s Primavera Sound for the first time, We Heart speaks to co-founder/co-frontwoman Ana Perrote about press and politics; life on the road; Barcelona; and their sophomore album, I Don’t Run.

“I regret saying I wasn’t a feminist,” Ana Perrote tells me. “In the really early years of the band we had no idea about what a big issue sexism is in the music industry, how unfair things are, and we were scared to call ourselves feminist, or even to dress like girls.” 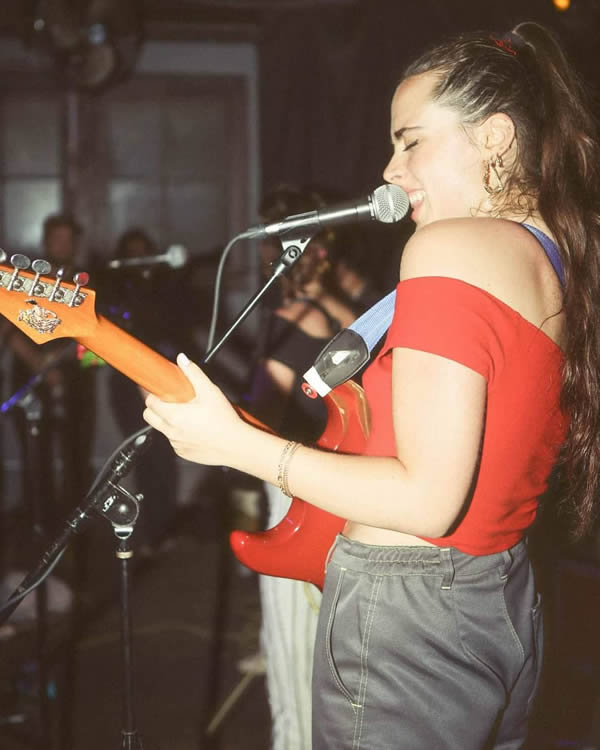 You can see where they were coming from. It shouldn’t be an issue. That the Madrid four-piece are female should not cross the mind. It wouldn’t if they were four white guys belting out shambolic indie pop. But in the age of soundbite culture and hashtag activism, having something to say—even if you haven’t thought it through—has become unavoidable. Just ask Julian Casablancas, who was roundly lampooned after a recent interview with Vulture.

“First, I want to say that I liked that interview,” Perrote ripostes. “I didn’t think it was that bad, he just fucked up with one example, it’s not easy being clever and interesting 24/7, we all say shit we didn’t think through and regret it two mins after. The difference is we have cameras on.”

Well-renowned fans of The Strokes, you might forgive the singer-guitarist for going easy on Casablancas, but she has a point—musicians are not meant to be philosophers, they’re meant to walk in a room and raise the roof. In the post-Spotify landscape of rock and roll, clicks are the new gold album. When listening tastes are reduced to algorithms, the press are more hungry for Twitter headlines than they are understanding the complexity of an artist’s identity.

“We don’t read much of our press,” she admits. “Not because we don’t care about people’s opinions, rather that we prefer to go to the merch-stand after the show and talk with our fans, or ask our friends and crew. We read all the album reviews, though.” Which mustn’t have been difficult in the wake of their recently-released follow up to breakthrough debut, Leave Me Alone. 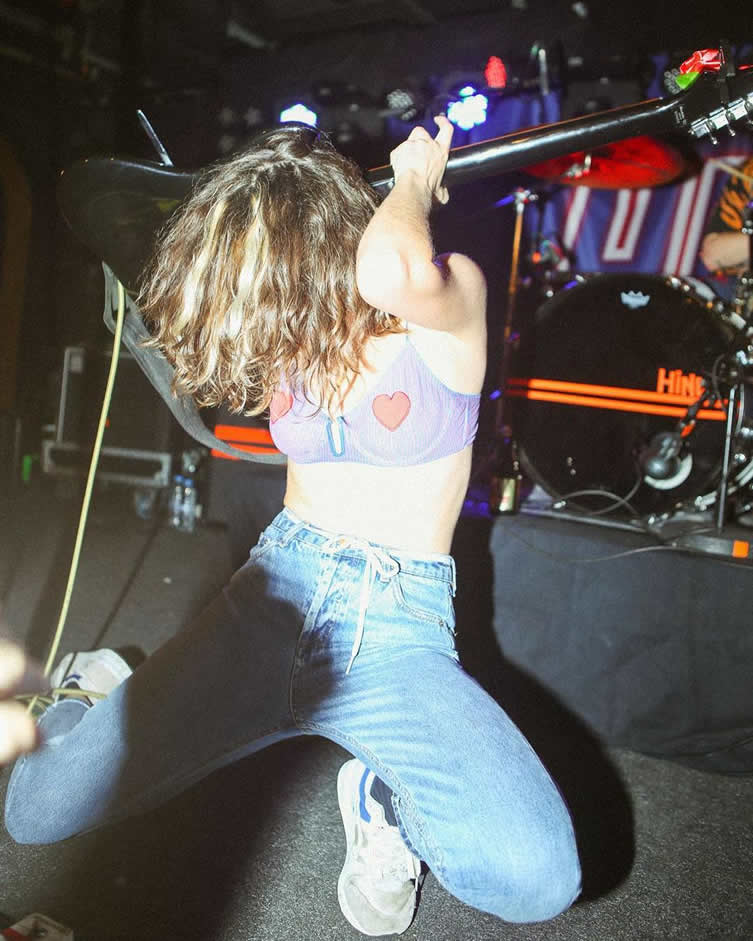 “Life on the road is crazier than ever. The more people that come to our shows, the more wild we are getting. I always think the best thing Hinds do is play live. We get really passionate, and we use the audience´s energy to give different kinds of shows.” 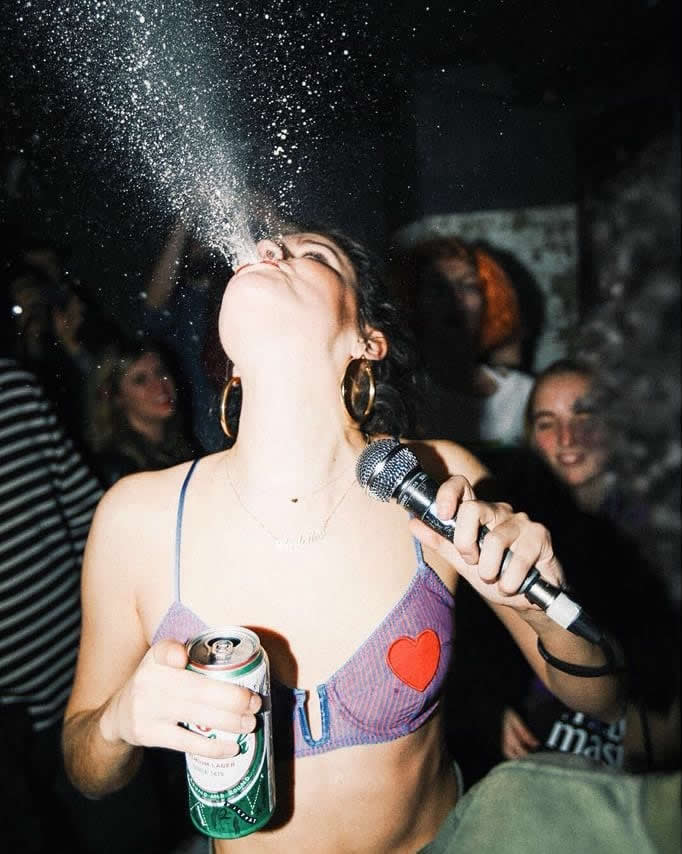 “The Spanish group’s second album displays the superior songcraft of the band,” lauded Pitchfork; giving it four-out-of-five, The Guardian praised their “warm, ramshackle indie”; granddaddy or popular culture, Rolling Stone, called I Don’t Run “a gem of indie-rock-revivalism, making faux-naif surf licks and Mo Tucker drum beats seem new all over again”; and Drowned in Sound slammed down a near-perfect nine-out-of-ten for its “loveable lo-fi embedded with off-kilter charm.” 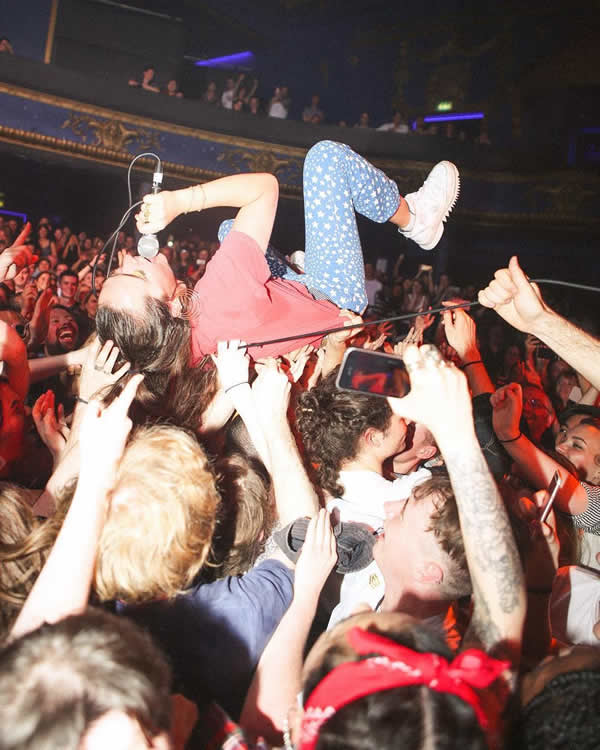 Famed for their chaotic live performances, the new album sees the fragility of their ‘warm ramshackle’ harnessed by the producer behind The Strokes’ iconic debut; Gordon Raphael the first non-Spanish speaker they’ve ever worked with. Accompanied by Grammy award-winning engineer Shawn Everett, Raphael coaxes career-defining performances out of a band he had long-championed. “When he first sent us a message we couldn’t believe it,” Ana tells me, “we were still called Deers [their first name was changed at the end of 2014 after a threat of legal action from Canadian bores, The Dears] and only had two songs on the internet!”

“From then, we kinda kept in contact, and when we started thinking about our sophomore album we knew we wanted to work with someone with more experience, but that we wanted to co-produce it ourselves too. He seemed perfect. I thought, if he liked Deers, he is gonna love Hinds.” The Berlin-based American producer is not alone. Hinds’ energy is infectious, and in a world where gigging has become more integral to a band’s existence than ever before, their combustible performances are winning them new fans the world over.

“I always think the best thing Hinds do is play live. We get really passionate, and we use the audience´s energy to give different kinds of shows. I’m in the van right now, travelling from Minneapolis to Denver, and they just told me Denver has sold out! The reaction we are getting is so, so, so, so good … sometimes we can’t even sing the songs because of how loud the crowd is. I think we’ve built a beautiful community all around the world, and they love the new album.” 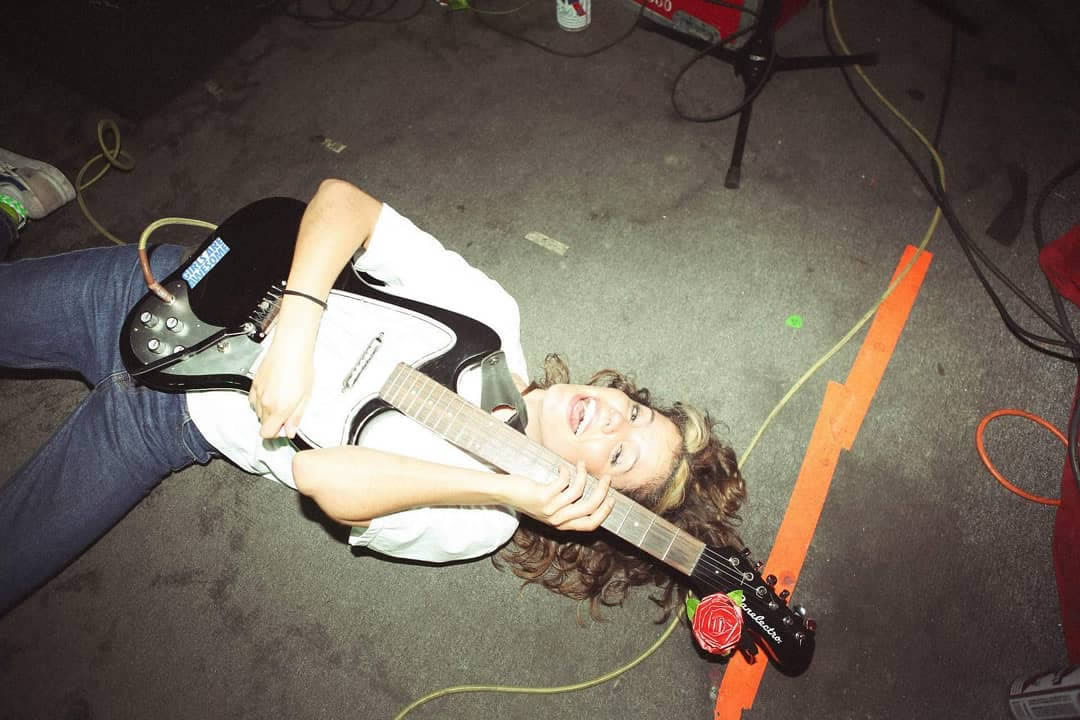 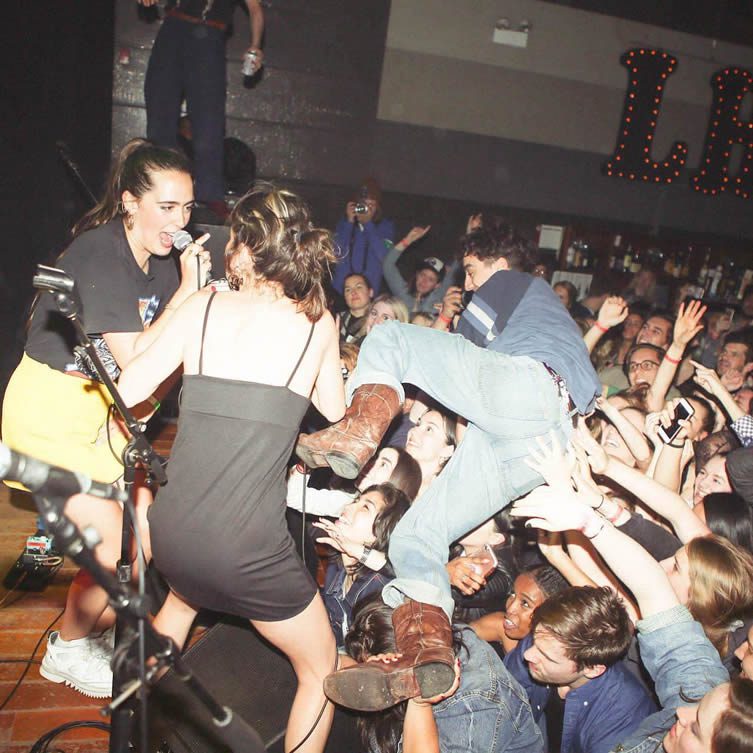 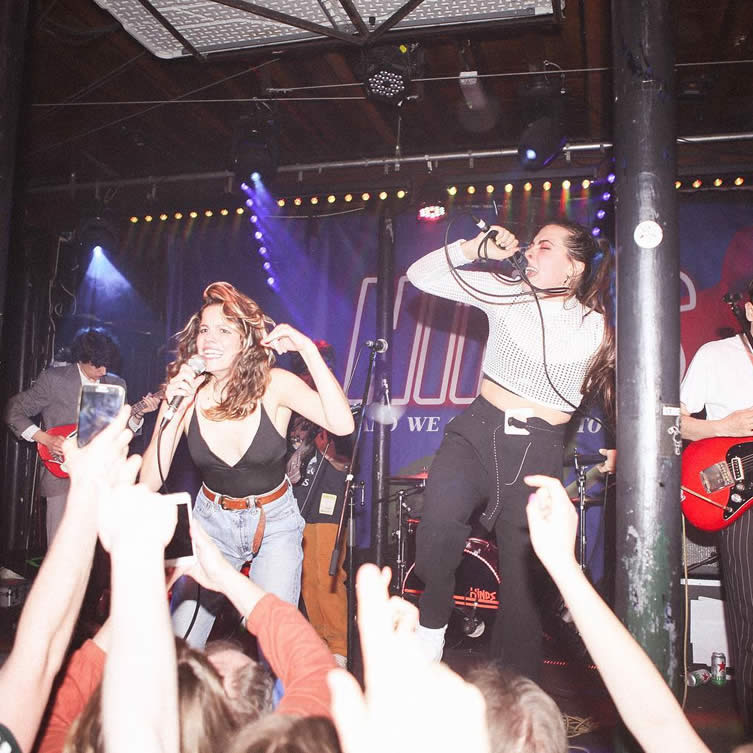 With the DIY essence of punk at the core of their being, Hinds shows have a well-earned reputation for turbulence. Have they polished their raw edges as they move into the next stage of their career? “Life on the road is crazier than ever,” Perrote reassuring me that their spirit is as alive as it has ever been. “The more people that come to our shows, the more wild we are getting … we are also learning how to communicate better I think. We definitely have more control and knowledge about what we are doing and where we are going to, but that just makes it even more intense.” 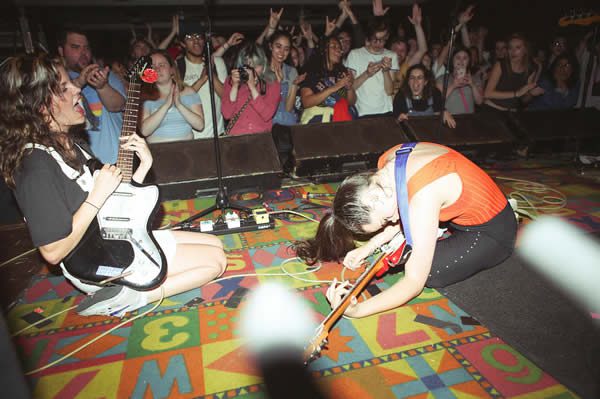 “I think I’m the tough one,” she confesses, as I question her on staying united on the road, “the rock that protects the rest. Carlotta [Cosials, Perrote’s fellow co-founder] always has energy, when we are dead and exhausted she’ll find strength somewhere to work on Hinds. She would die of passion. Amber [Grimbergen, drums] is the best for cheering you up, when she’s having fun she will always transmit it to the whole band, or whoever is in the room. And Ade [Martín, bass] has my favourite laugh and is a true rock and roll believer.”

Set to mark their Primavera Sound debut with a performance on one of the festival’s main stages next Thursday, 31 May, I ask Ana if the anticipation is building.

“It’s an awkward feeling … it feels really weird that we haven’t played it yet, like we were grounded or something. We just wanna do it so we can get rid of this feeling,” she adds, laughing. “The last time we played Barcelona was in November, when politics and confrontation was at the front of everyone’s mind. We were a little bit scared that the crowd was gonna feel weird, but it was actually the most kind show we’ve played there. It felt so good to know that music rules over fights and disagreements. It was really empowering.” 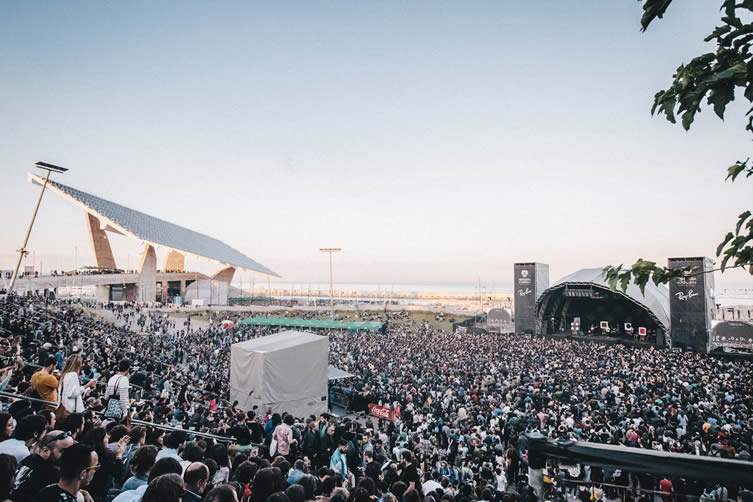 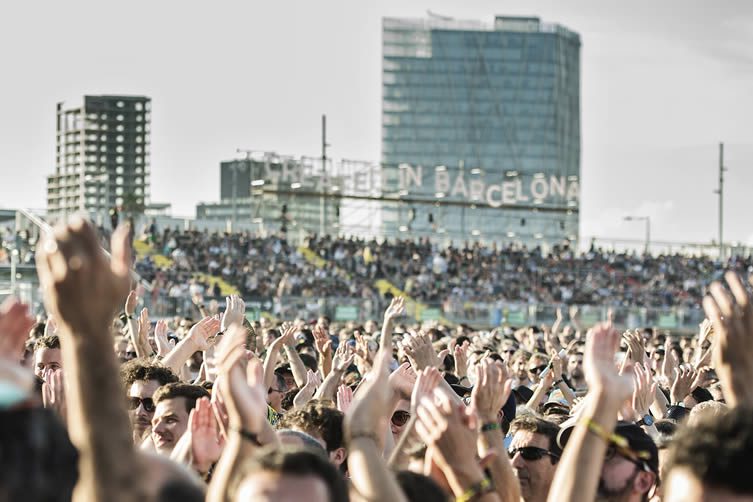 “It’s an awkward feeling … it feels really weird that we haven’t played it yet, like we were grounded or something. We just wanna do it so we can get rid of this feeling.” Primavera Sound Barcelona. Photography, Mick Habgood; Eric Pamies; and Garbine Irizar. 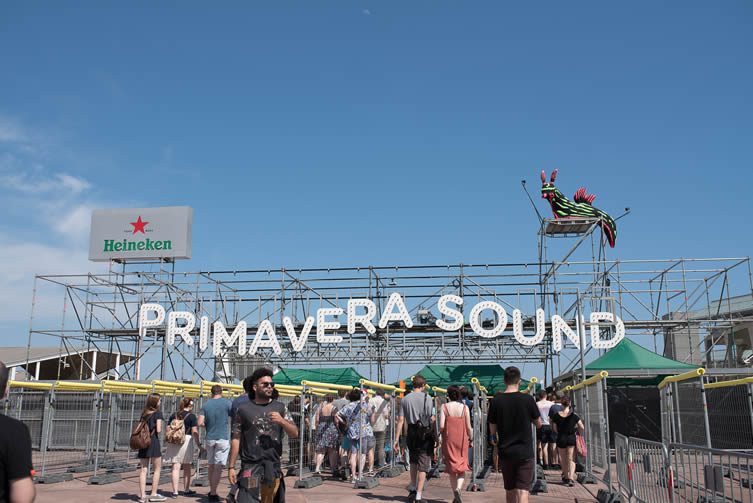 I wonder that, if for all the buoyant optimism their sound effuses, whether the issues that surround us—Trump, the rise of the far-right, Brexit—have seeped into their new album in any way. “I think all the bullshit just gives us more reasons to keep doing what we are doing, and somehow it creates a stronger connection with our fans and people that feel the same way as us. We have more reasons to yell.” Have Hinds, a band renowned for a ‘fuck it, let’s dance’ approach to life, become political?

“I think hinds is very political by the way we are, the way we talk, dance etc. I don’t think we need to say what we think for people to know it. We were raised on our teenage years with the word CRISIS written on our foreheads; everyone talked about it all the time, so when we started the band it felt good, relieving to sing about other things. Plus with the internet, I feel like there is a messy ocean of political opinions, which could be good, but it’s mainly used to see who can complain more and not really talk about solving those problems.” For Hinds, diversion is their politics, and it’s an attitude we could all learn from. To conclude, I ask Ana if she could give the world one thing to help make it a better place, what would it be. Her answer speaks volumes: 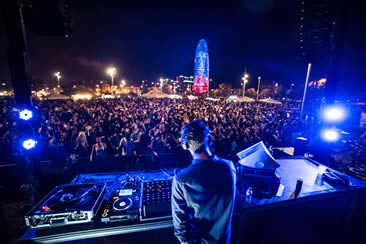 The clocks have sprung forward an hour and the sun has begun shining that little brighter, Barcelona has been catapulted into spring — and is celebrating with the fifth edition of popular electronic-minded music and street food festival,... 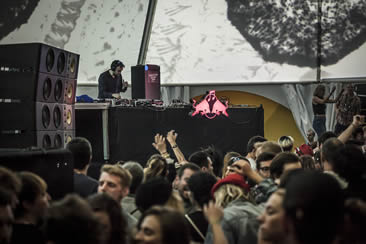