With its use of eye-zapping neon signs and attention-grabbing flags and totems, Superstructure can only be the work of Morag Myerscough and Luke Morgan; who work together as the “loose collective” Supergrouplondon. The wooden construction is a fittingly high profile way to welcome visitors to the 10th annual Stockholm Kulturfestival, which this year chose the United Kingdom as its theme. 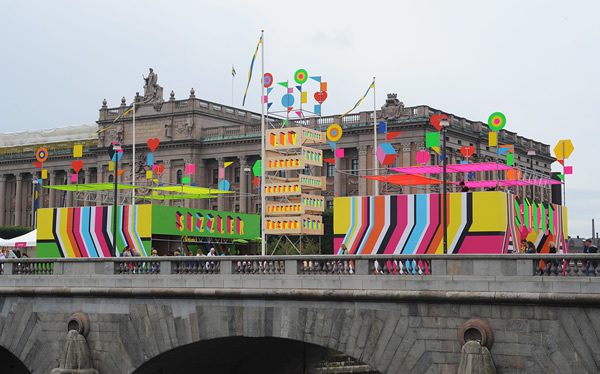 Myerscough and Morgan‘s contribution is situated on a bridge over the Norrström river, and stands in stark contrast to the long-standing architecture of the Norrbro bridge and the Royal Palace and Riksdag buildings in the background.

There was no hanging around for the two artists in getting this exhibit set up, with just a few days allocated for the whole process. At the core of the work is four shipping containers which provide a weatherproof place to hold workshops. Scaffolding has been used to create various viewing platforms, which were designed to give even local residents a new perspective on their city. The central column is a collaboration with the British poet Yemisi Blake, who worked with local children to create bilingual poems. Recent graduates Olle Ardman and Björn Krogvig also played a big part, supervising a three-week painting workshop in an old city warehouse to get Superstructure ready in time. 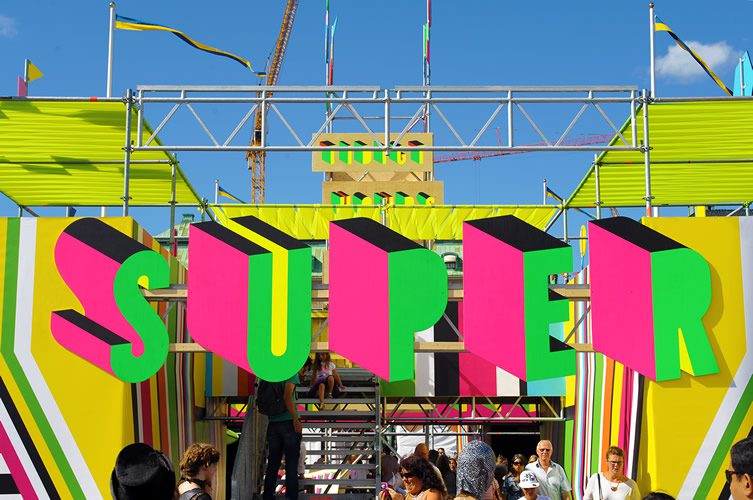 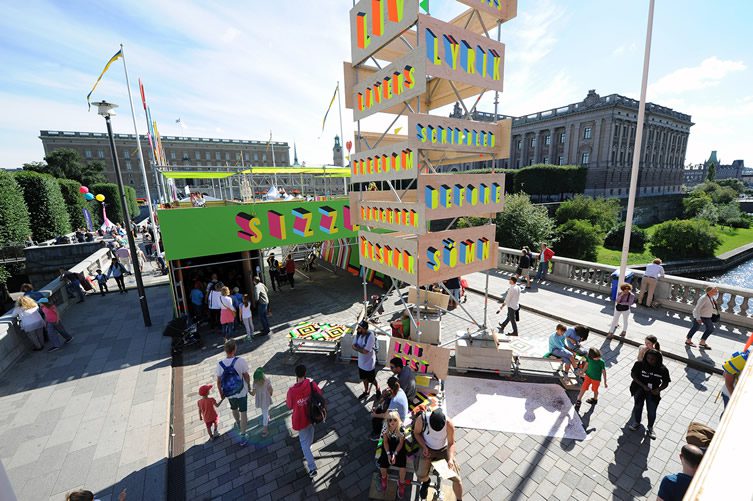 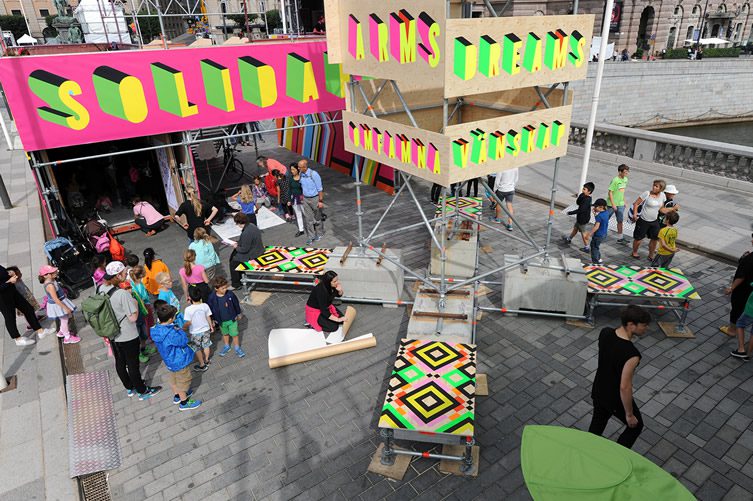 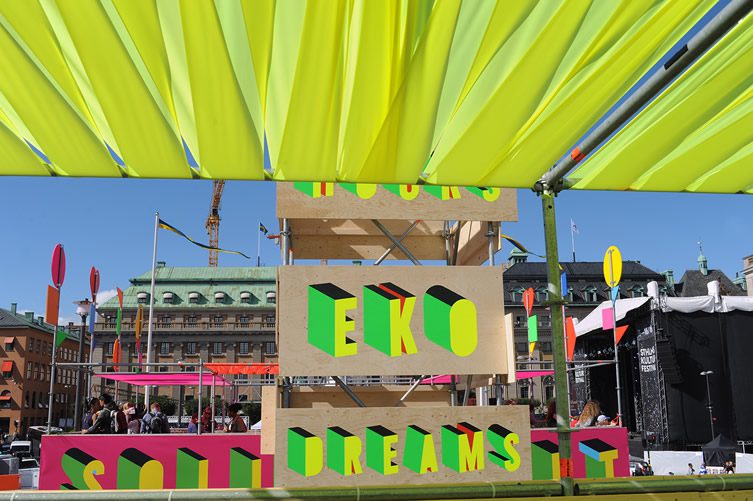 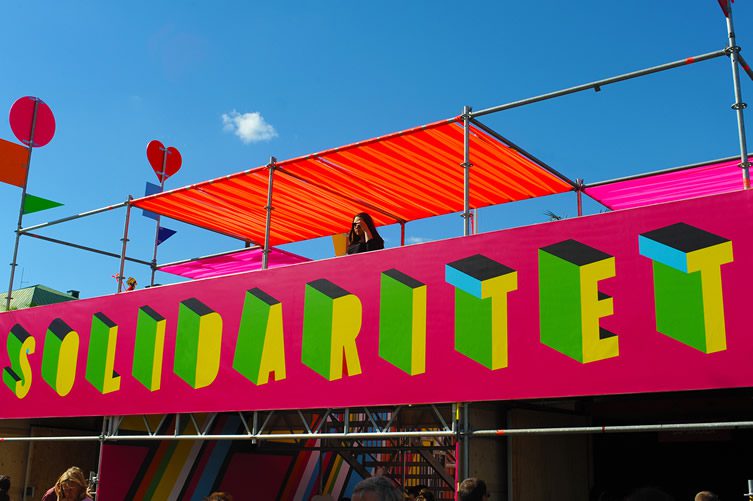 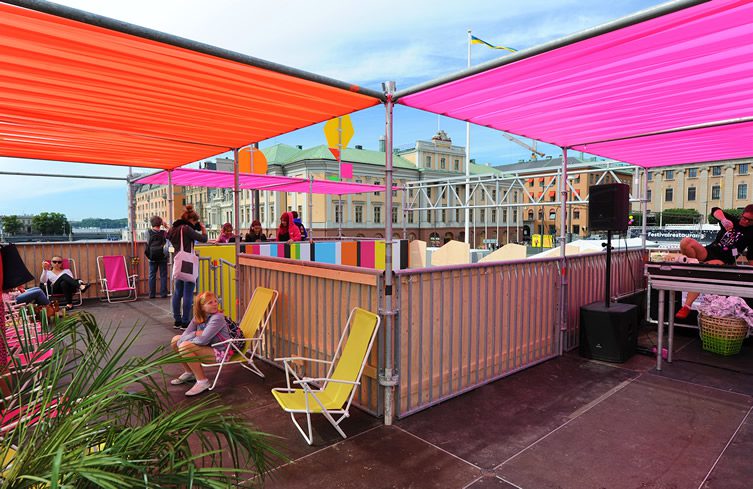 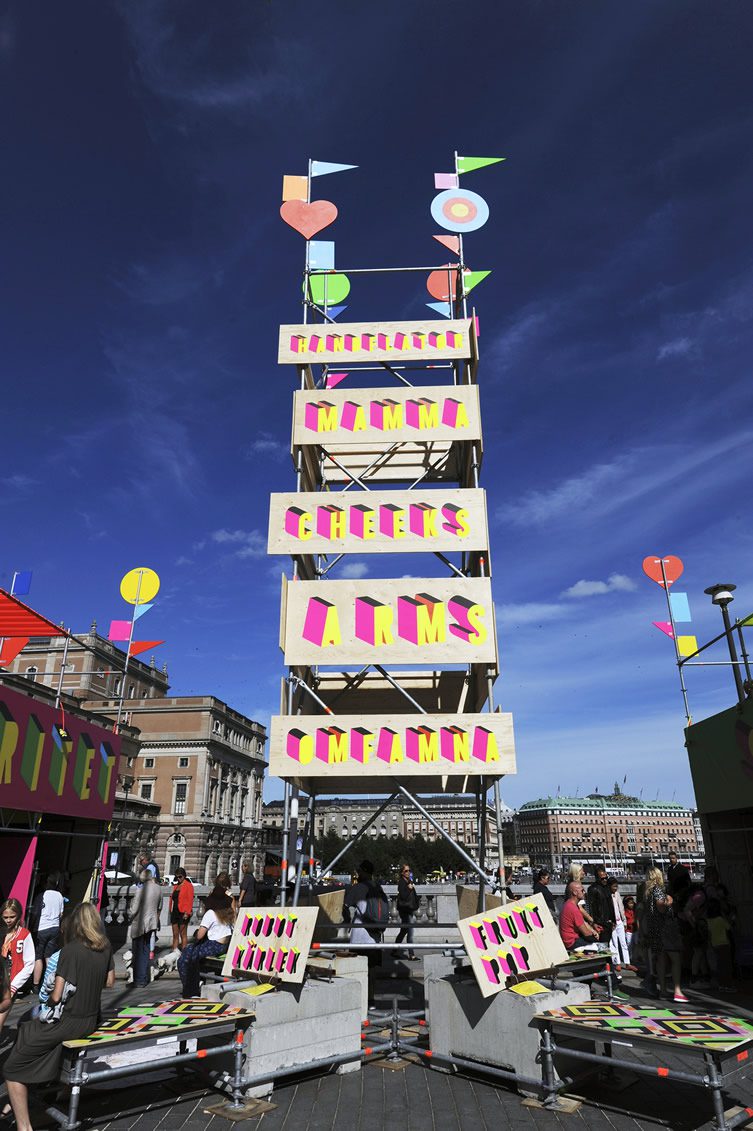 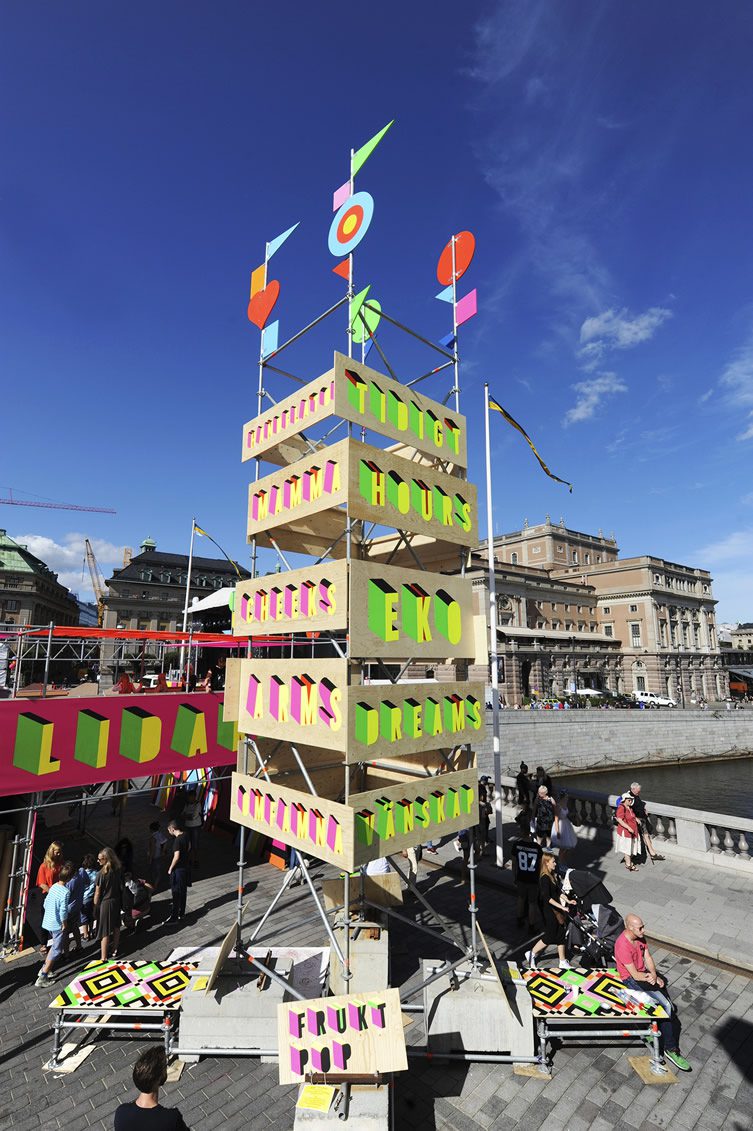 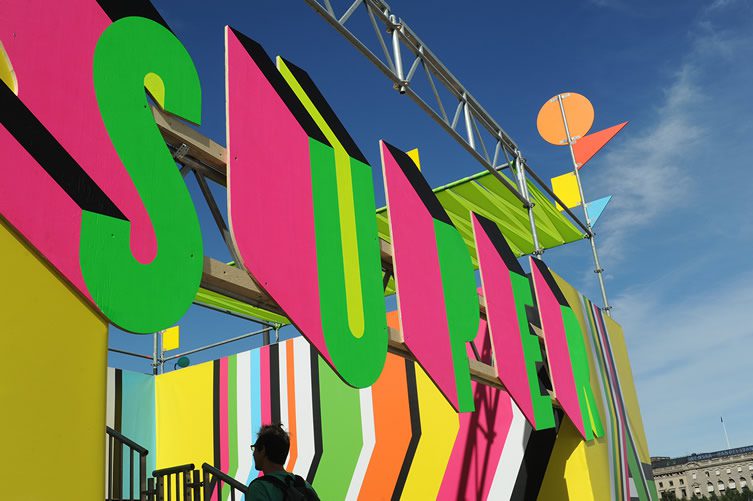 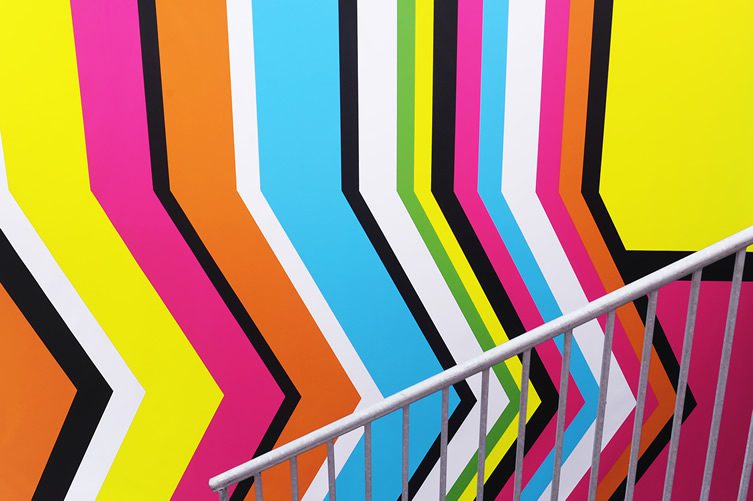 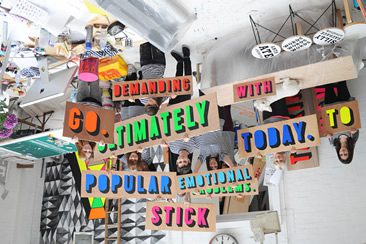 Myerscough and Morgan unleash their sculptural wordplay at two diverse locations this summer...

Two of We Heart's favourite colourful characters have been up to their tricks again this summer. When Morag Myerscough and Luke Morgan arrive on the scene, people usually find out about it in a hurry thanks to the signature use of highly-coloured... 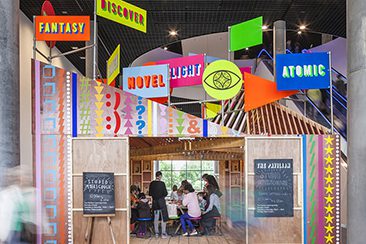 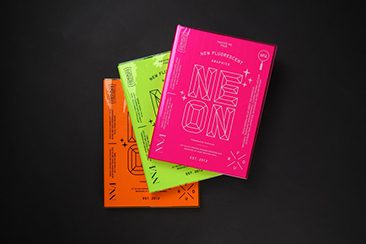 How fluorescent colours are lighting up our world...

For those who had a heavy weekend, a word of warning: put some shades on immediately. The most recent of publisher viction:ary's Palette series - Palette No.4: Neon, New Fluorescent Graphics - is looking at what are commonly called the neon colours... 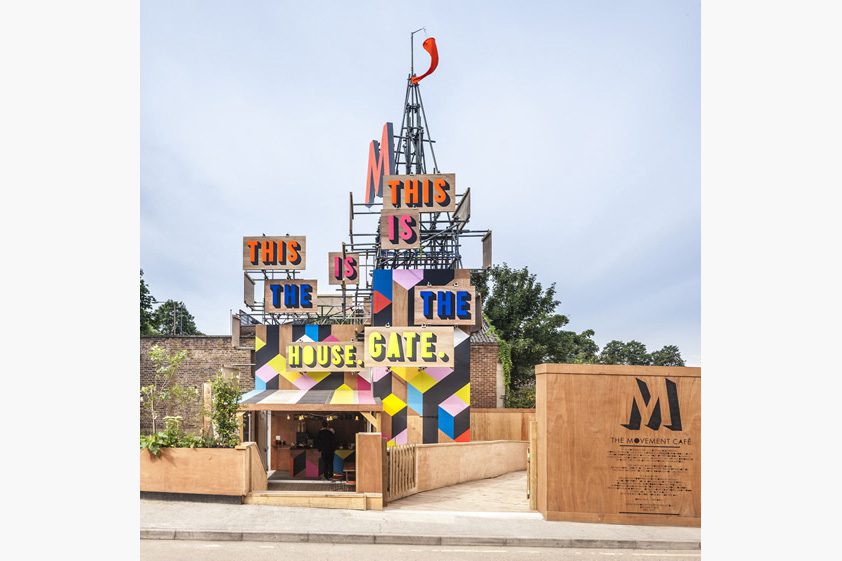 The developers of The Movement Café, Greenwich, were so keen to have it finished before the Olympics began that they managed to get the whole building up in 16 days. The Cathedral Group's self-imposed deadline was an effort to spare visiting fans...