“Where to for the weekend, Henry?”

“Well, Bunny is having his thing in Rome. Shall we?

“Oh yes let’s. The weather here is a dreadful bore.”

Welcome to the 1950s, where we join a new group of wealthy socialites for whom the sky really is the limit. Rich, under-employed and oh-so-glamorous, the Jet Set are about to take flight on a whirlwind of party-hopping weekends amid stretches of leisurely loafing on sun-drenched shores, powered by the arrival of revolutionary jet-engined passenger planes. These amazing machines, beginning with the de Havilland Comet and later the Boeing 707, opened up a new world to those with the means and opportunity to leave it all behind. All you needed was a ticket.

Of course today, one takes the simplicity of air travel for granted. Back then, though, the concept of taking flight was one still very much aligned with the spirit of adventure; a grand voyage of discover. A trip to the skies in the ’50s felt as fanciful for the everyman as the superyacht pipe dreams those betting on the Euro Millions conjure today. Put simply, it was a time of monumental change, and those who had it all were at the front of the queue. Turning left before it meant something.

The world of films had hitherto seemed an unreachable fiction for most people (Fellini’s La Dolce Vita epitomised the life of the Jet Set in 1960), but now destinations glorified in the movies were within the gloved grasp of the well-to-do middle classes. Adolescent boys who had fantasised over movie star pin-ups on their bedroom walls might now in adulthood aspire to meet their idols in person, on the beaches of the French Riviera, Acapulco and Hawaii, in the cafes of the great European cities, or in Hollywood itself. More and more international routes opened up as the jet age gathered momentum, and by the 1960s it was possible for the adventurous and loaded to fly to the four corners of the globe. And fly they did. 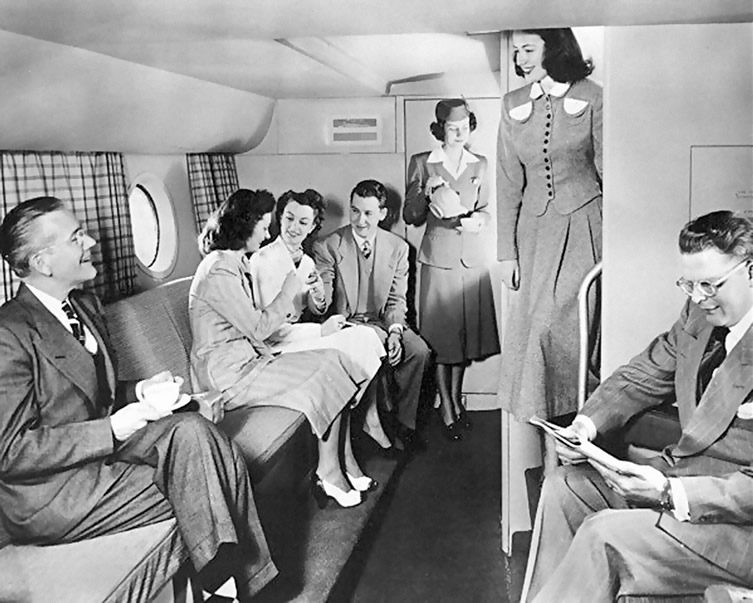 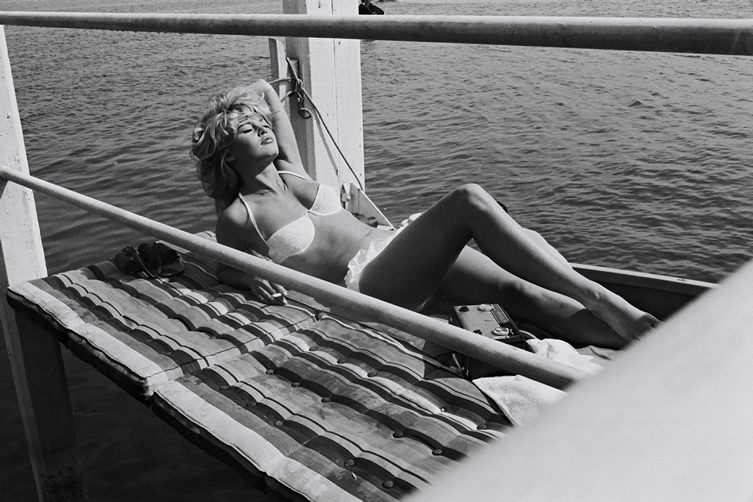 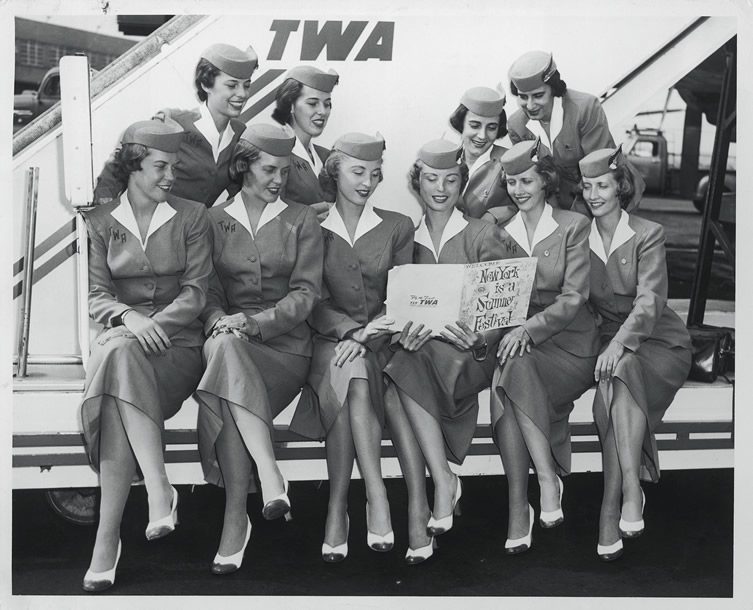 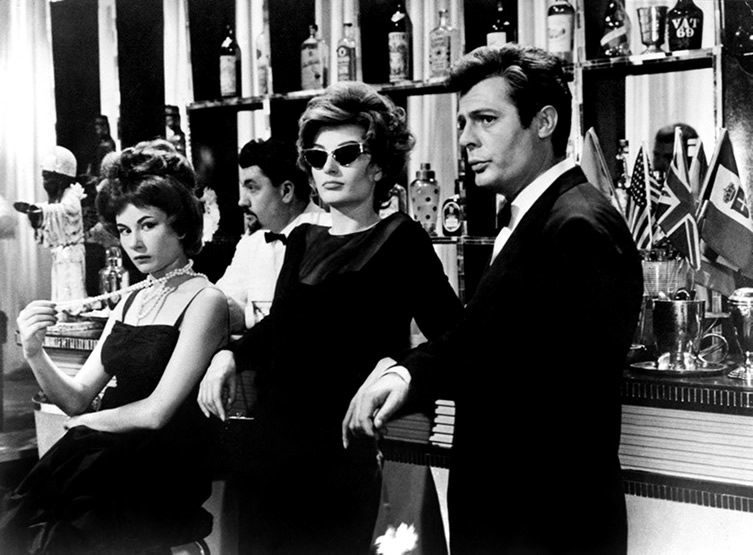 In the 1950s and ’60s, flying was a very different experience to that which we enjoy today. Modern air travel is all about volume, value and efficiency, but back then airlines marketed themselves as high-end luxury service providers. First class was five star, and even in the cheap seats there was room to stretch and the drinks kept flowing, served with a smile. The journey began at the airport of course, and airports were designed to reflect this futuristic method of travel.

The Los Angeles International Jetport, built in the late ’50s, is an example of forward-thinking architecture; the Pereira & Luckman architectural firm designed the building to look as though a UFO had landed in the car park, and their alien design that tapped into the prevailing craze for sci-fi could easily have doubled for a Martian spaceport. The original plan was for one giant terminal serving all the airlines, and it was based around a giant glass dome surrounding the central pillar which was to have a world map etched into it. Sadly, the Los Angeles building regulators deemed the project too ambitious (the cost of air conditioning alone was judged to be prohibitive) but the Jetport was still something special.

New York got in on the act soon after with the TWA Flight Centre – a stand-alone terminal at Idlewild (now JFK airport) built in 1962 and designed by Eero Saarinen. The Finnish-American architect was one of the judges who had selected Jørn Utzon’s winning proposal for the Sydney Opera House a few years earlier, and the influence of Utzon’s “genius” design is clear to see. 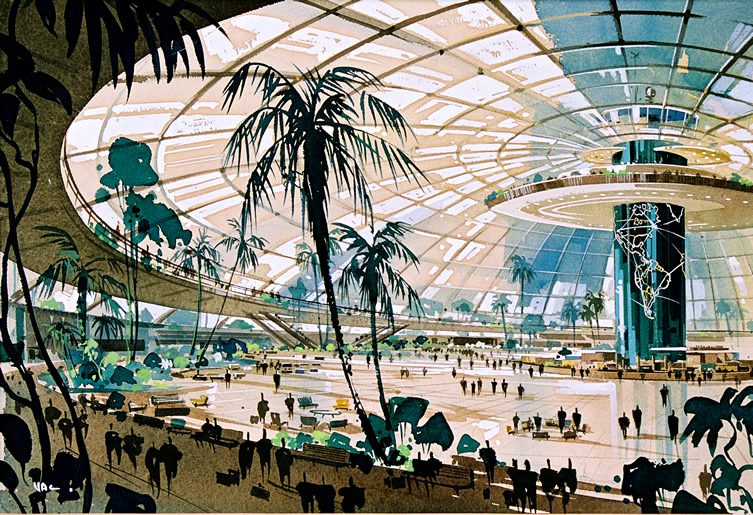 Pereira and Luckman’s 1952 design for Los Angeles International Airport (LAX) called for a glass-enclosed central terminal, with a world map etched on the central column. Their original plan died because the city’s Building Department found it too radical, the cost of air-conditioning would have been exorbitant and the airlines wanted their own individual terminals. Image courtesy LAX Flight Path Learning Center. 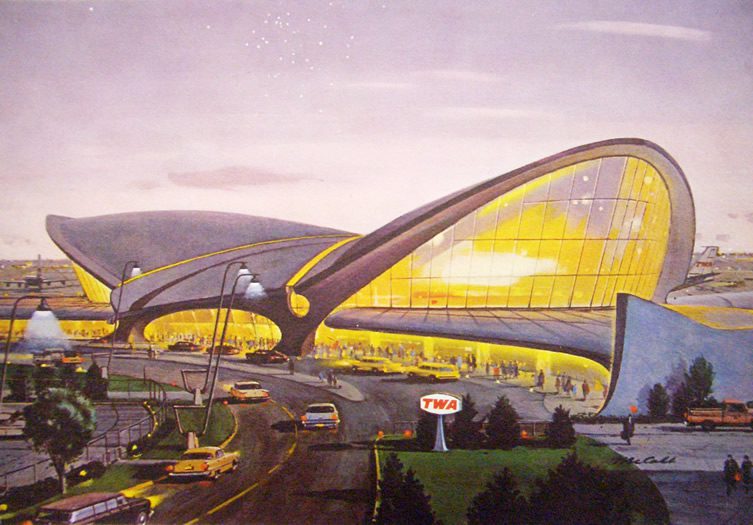 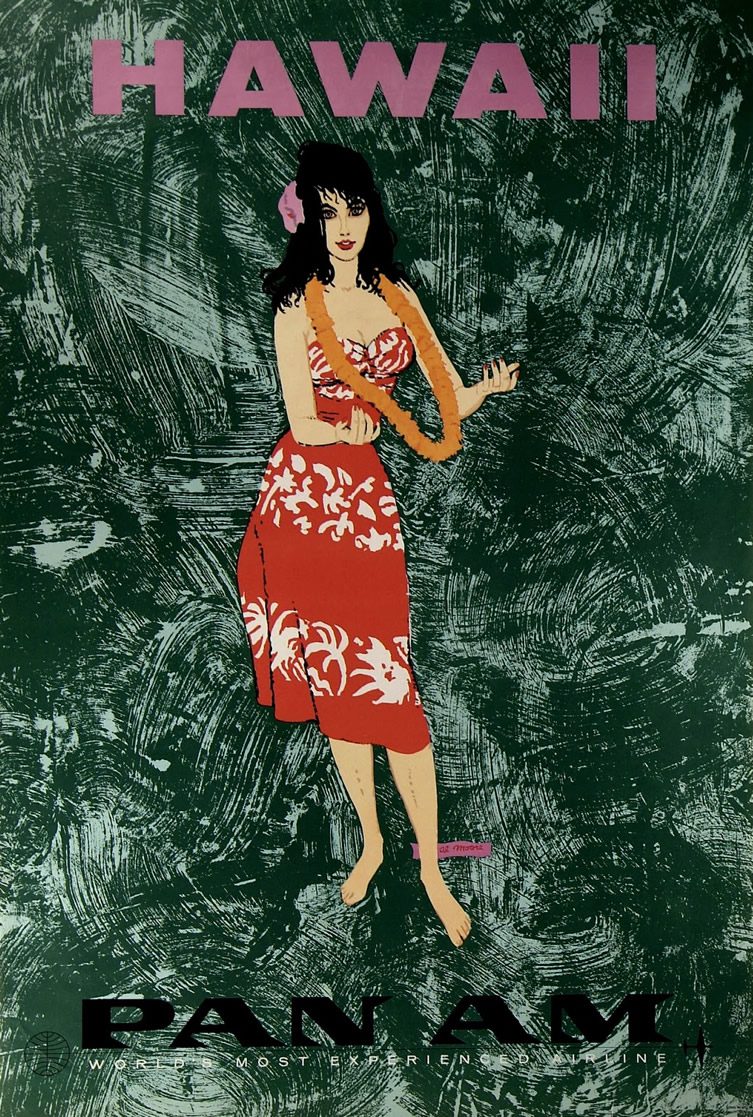 Once passengers were checked in and wafted through the lavishly appointed lobby areas, they stepped aboard what was at the time near the pinnacle of human endeavour – only NASA engineers and their rivals in the USSR space program were pushing boundaries further. The jet aeroplane was science fiction turned science reality, with unimaginable speed and range thanks to engine technology developed during the Second World War.

International travel was still a fledgeling business, and as such there was little pressure on airlines to cram seats into the spacious cabins. The planes were laid out more like luxury ocean liners, very similar to today’s private jets with a lounge feel rather than the regimented rows we are familiar with today. Recline with a complimentary whisky, enjoy a cigarette, or get up and mingle like one would at a cocktail party. Exciting names such as the Stratocruiser and the Electra Jet captured the imagination through advertising, and when the huge Boeing 747 superjumbo was introduced in 1970, the air travel experience reached a zenith of luxury and comfort that subsequent generations of travellers can only marvel at with envy. 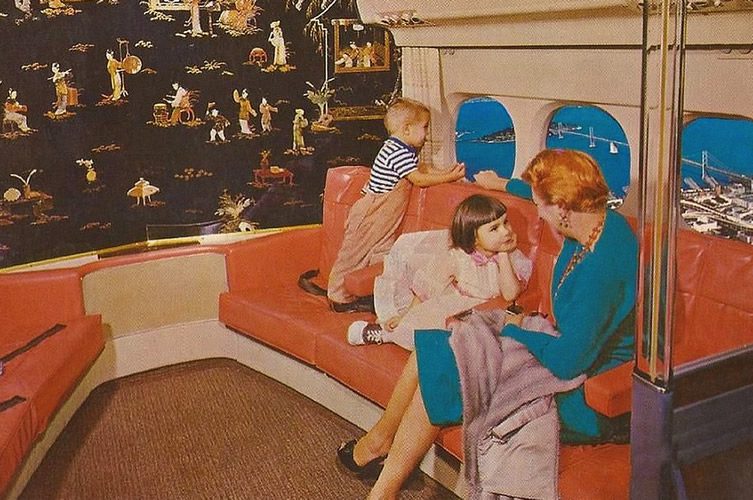 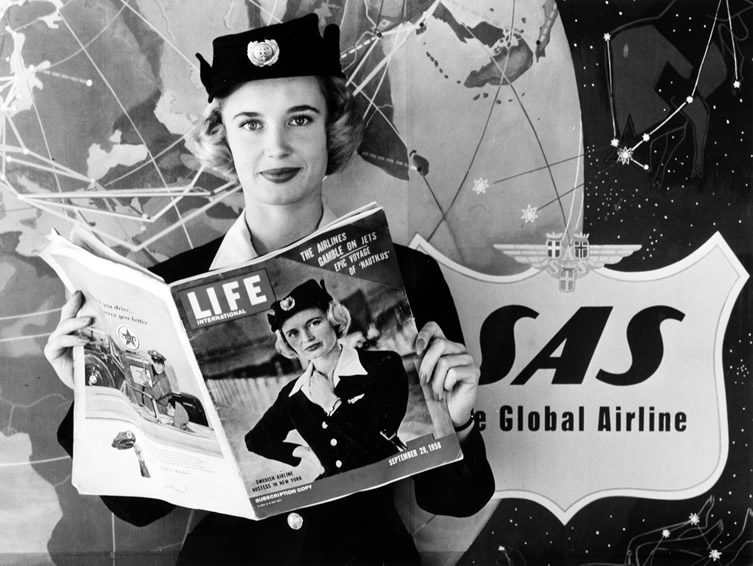 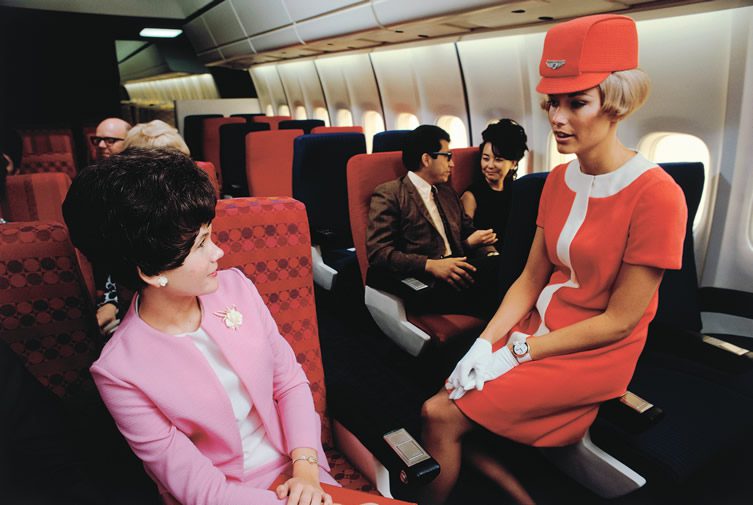 Confab pretence — a United Airlines stewardess chats to a passenger in a simulated cabin of a Douglas DC-10, 1968
From Airline: Style at 30,000 Feet by Keith Lovegrove, and Laurence King Publishing.

Another massive draw of air travel, especially for the lone male business traveller or idle playboy, was the promise of glamorous air hostesses, colloquially known as “trolley dollies”. Hired in the main for their good looks, these young women were the subject of both welcome and unwelcome attention in the execution of their duties, and were held to stringent (and by today’s standards, outrageous) regulations regarding appearance – gain weight and you were grounded, or dismissed. Despite this, the job of air hostess was tremendously desirable, as it offered young women from any background the chance to enjoy the Jet Set life of international travel, albeit on a more modest income. The image of the job was further enhanced by LIFE magazine’s 1958 cover featuring Birgitta Lindman, a beautiful platinum blonde Scandinavian Airlines hostess who beat 53 other hopefuls to land the coveted covergirl spot.

As Keith Lovegrove’s book Airline: Style at 30,000 feet — published by Laurence King — shows, air hostesses were held in far higher esteem than a common-or-garden variety average waitress on the ground. Rather, these intrepid women were seen as sophisticated style icons – aeroplane runway models navigating a tricky environment in contemporary, often daring fashions while all the while maintaining perfect balance and composure. 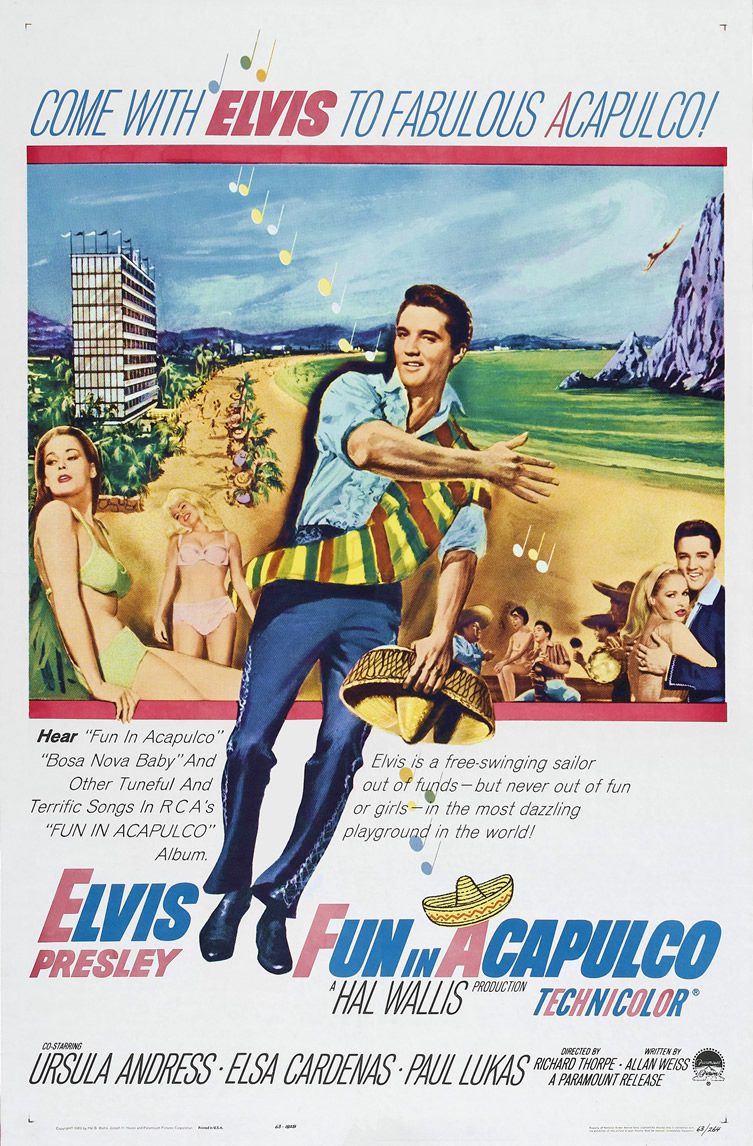 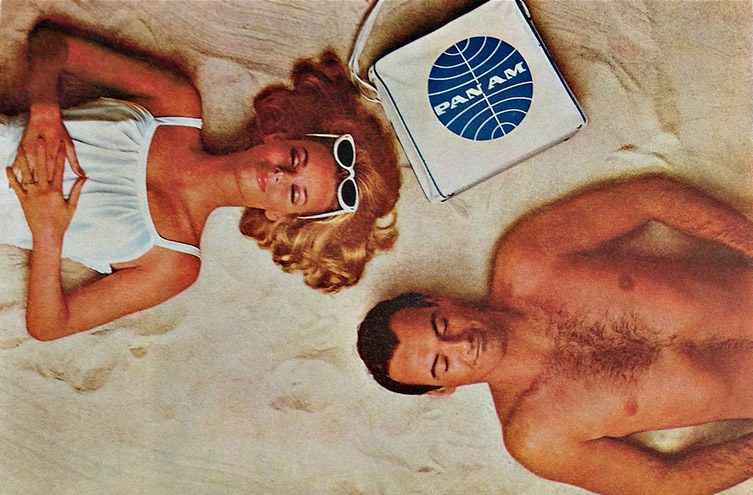 Glamorous, exotic, luxurious, adventurous – the Golden Age was the ultimate time to travel.

Or was it? There’s no denying it offered a vastly different passenger experience to the one we recognise today, and in many ways that period will never be bettered. However, modern air travel does have its advantages, and the benefits of both eras can be found in this comparison from Expedia.

This story was produced in collaboration with Expedia.