Forget the crisis in Ukraine, the biggest international story of the moment is that the Berlin Wall is being rebuilt. Happily for the reunited peoples of Germany, it’s a replica constructed in Shoreditch to revisit the revolutionary spirit of wall-painting dissident Thierry Noir.

When the jubilant citizens of Berlin brought their hammers crashing down on the emblematic barrier (dividing the West of the city from the communist East) quarter of a century ago, they were destroying not only a hated legacy of World War Two, but also what had become a canvas for the artistic expression of democratic protest. First among the muralists was Noir, who in 1984 raided nearby construction sites for supplies and began the illegal assault with paintbrush and spraycan – an assault that would gather momentum until the wall broke under the weight of public pressure five years later.

Noir himself painted several miles of the wall. His dedication to the reunification of Berlin is admirable, and perhaps even surprising, given that he had only been a resident of the city for two years before he began his work. Noir had arrived in 1982 from Lyon, France, with one suitcase to his name. Moving in the same circles as other creative West Berlin immigrants such as David Bowie and Iggy Pop, he found himself living in a squat which happened to have a view overlooking the wall and into the East. Whatever built up over the next two years, it was a powerful driving force, as the artist began his murals which he would work on every day for the next six years. 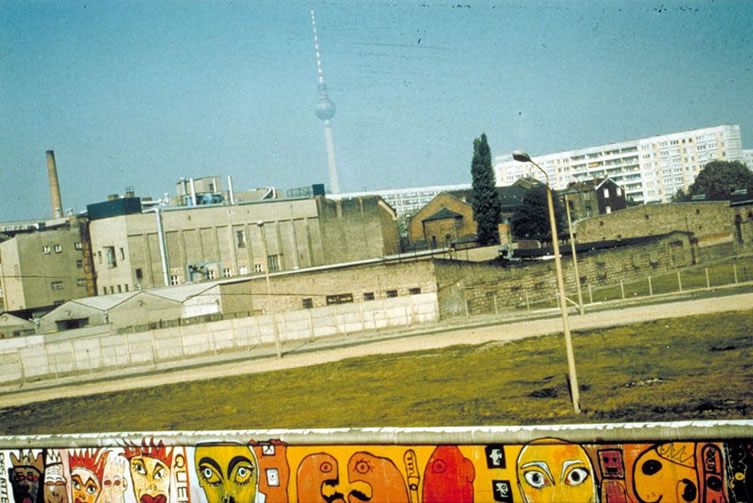 “This photo was taken in 1986 along the Waldemarstrasse in Kreurzberg. It shows my paintings and the paintings of Kiddy Citny. There were featured in the Wim Wenders film The Wings of Desire. These 5 sections of the wall are now in a private courtyard at 520 Madison Avenue in NYC and the ladder I was using is in the permanent collection of the Wende Museum in the USA. What a destiny!” 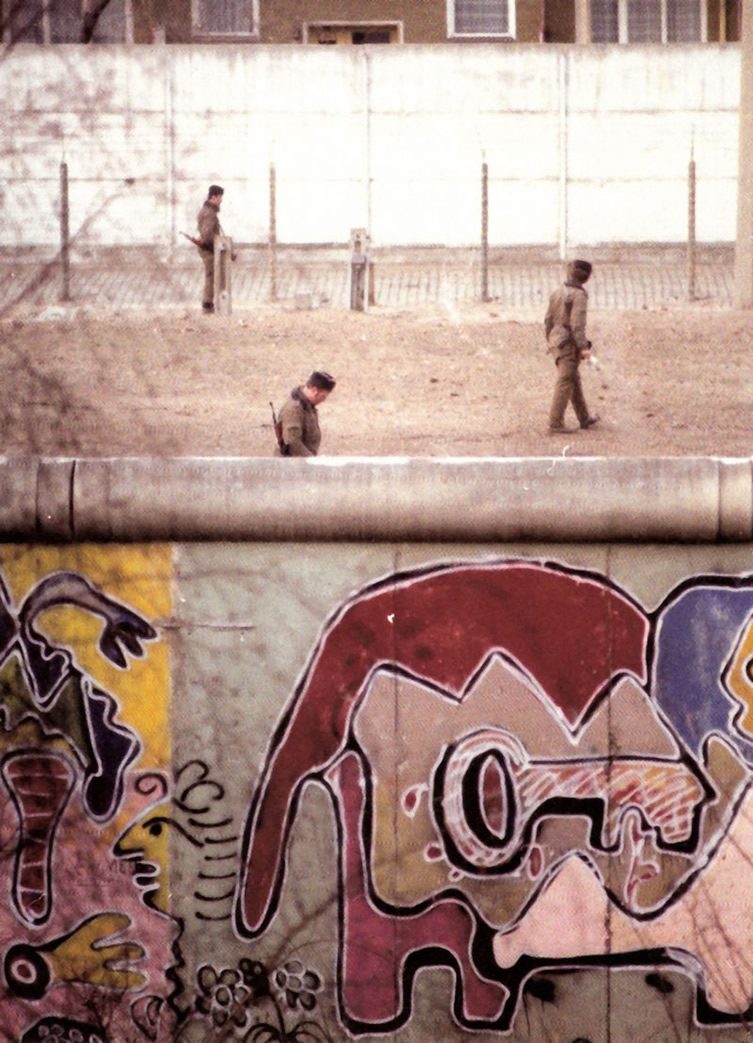 “Here you can see a patrol of the Grepos (Grenzpolizei/Border Police) of the GDR on the Death Strip between the two walls, the border of East and West Berlin. I took this photo my window in the squat where I lived for 20 years (1982-2002). Nothing really happened at the Berlin Wall. There were no cars, no shops and no noises. I never saw any “actions” with the Grepos.” 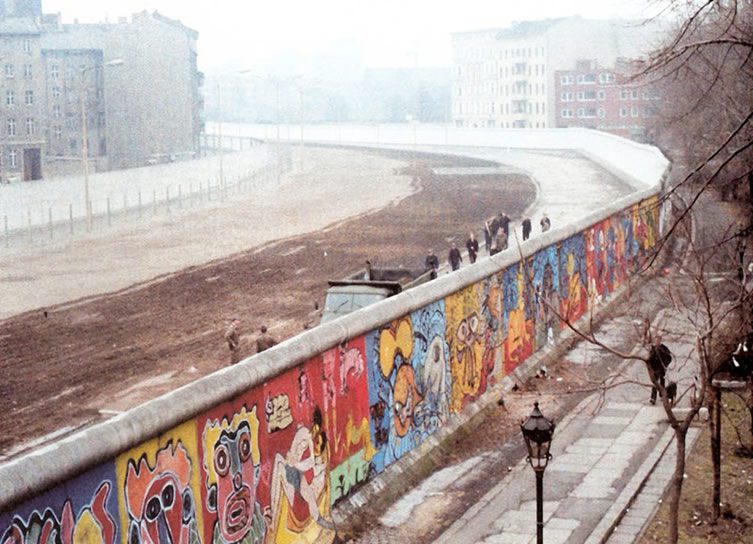 “This image was taken in 1986 at Bethaniendamm in Berlin-Kreuzberg. Here we can see a “GDR Pioneer” cleaning squad clearing away waste from West Berlin. In those days it was popular to throw everything over the wall: empty bottles, refuse bins and diapers! For some it was a political act and people would scream at the same time “Scheiss DDR (fuck the GDR”).”

The artist’s wall paintings are notable for their vivid colours and outlandish, mutated figures, but they are not the angry attacks one might expect from a political revolutionary. Instead they convey a nostalgic melancholy, with many visual references to the lost joys of pre-war Berlin. “I did nothing but react to [the wall’s] sadness,” he says. As well as making their own statements, the murals sought to undermine the structure’s symbolic power, to show that it could be touched and changed, and that it was perhaps no longer the impenetrable barrier it had once been.

Huge sections of the wall containing Noir’s murals were taken down and sold; the artist estimates their total auction value to have reached $1.5million, of which he received none. They now reside in the homes of rich European collectors, but a greater part of Noir’s legacy lies in the influence he had on the emerging street art scene – an influence acknowledged last year as he joined current scene leaders Phlegm and ROA on a collaborative project in London.

Thierry Noir: A Retrospective brings the artist to the capital’s Howard Griffin Gallery, and contains new and exciting works to be displayed on the replica wall, as well as archive material from his work on the original. Photographs from the period tell their own inspiring story, aided by interviews and film material. This not-to-be-missed exhibition runs from 4 April to 1 May. 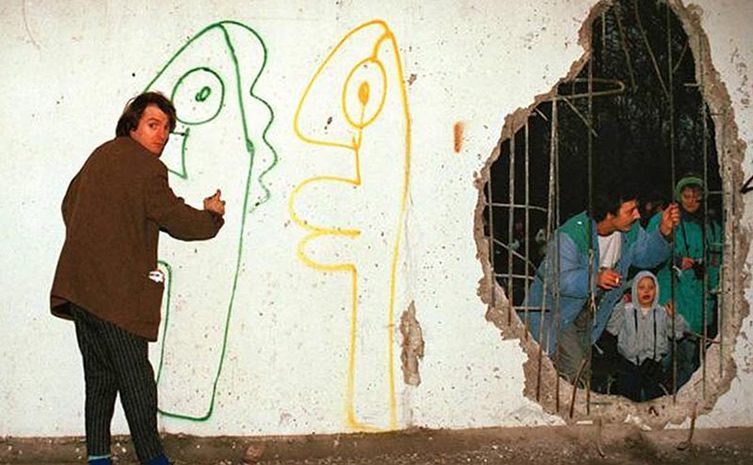 “Here I am painting on the other side of the Berlin Wall in the Death Strip. The photo was taken by the Associated Press photographer, Hans-Jörg Krauss, who was a war photographer. It was taken while the Wall was falling down and people had hammered heavily on the wall, making holes in it. These holes were so big in some spots such as near to Checkpoint Charlie or the Reichstag, that it was possible to pass through the holes and paint the other side of the wall.” 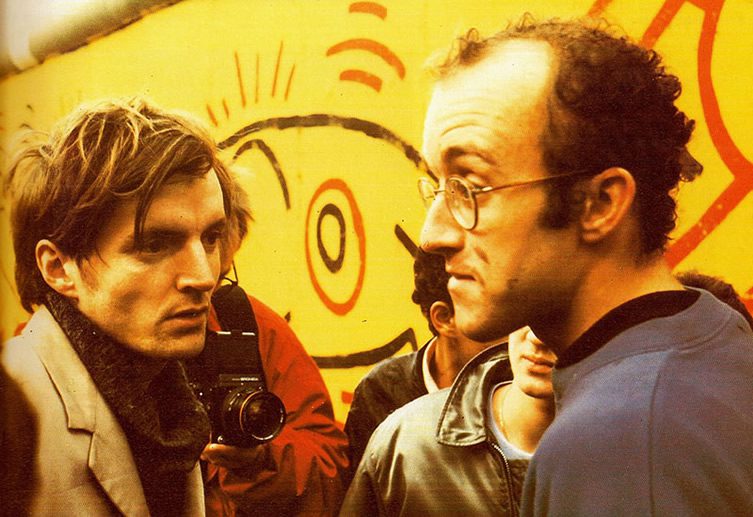 “On 23rd October 3rd 1986, three months after I had painted the Statues of Liberty, I heard on the radio that Keith Haring was in Berlin to paint the Wall at Checkpoint Charlie. I went there and I saw that my statues were all gone, painted over by a huge amount of yellow paint. I talked with Keith about this and he was embarrassed and apologised to me. He said that: “in New York you can get killed for that”.” 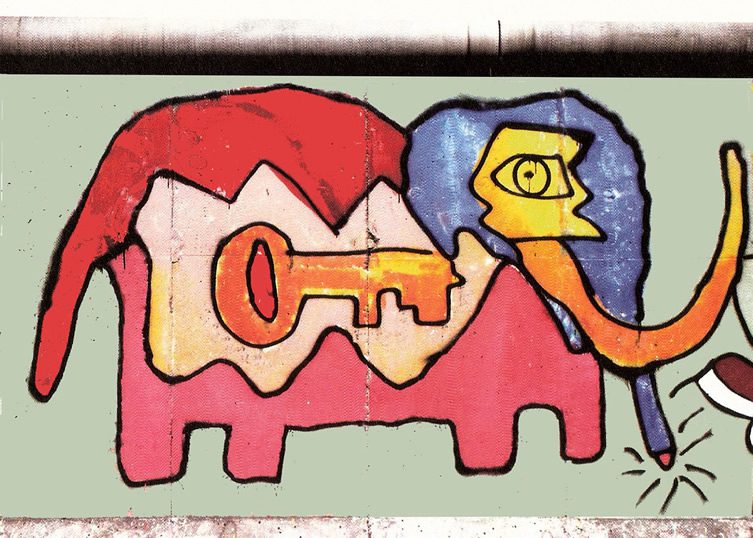 “This elephant was one of the earliest paintings that I made on the Berlin Wall. I began to paint outside because I wanted to say that it is good to put art in the streets and not solely in museums and galleries.” 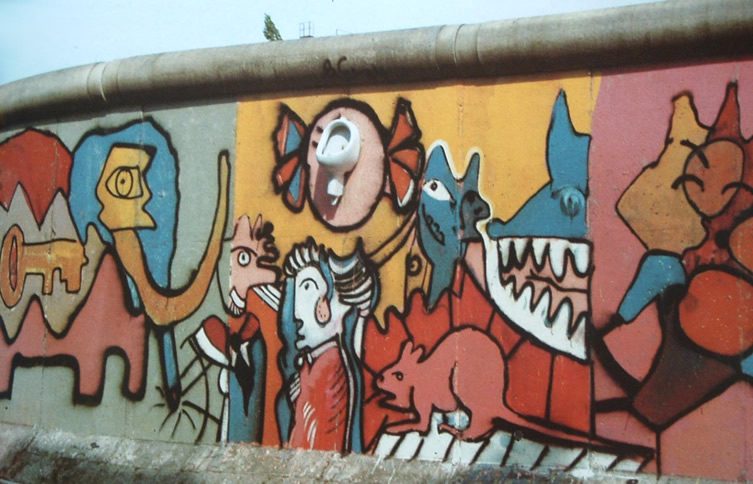 “This piece was a homage to Marcel Duchamp’s 1917 New York exhibition and the enormous scandal provoked by him in exhibiting a urinal. I put this piece up in April 1984, shortly after starting to paint the Wall.” 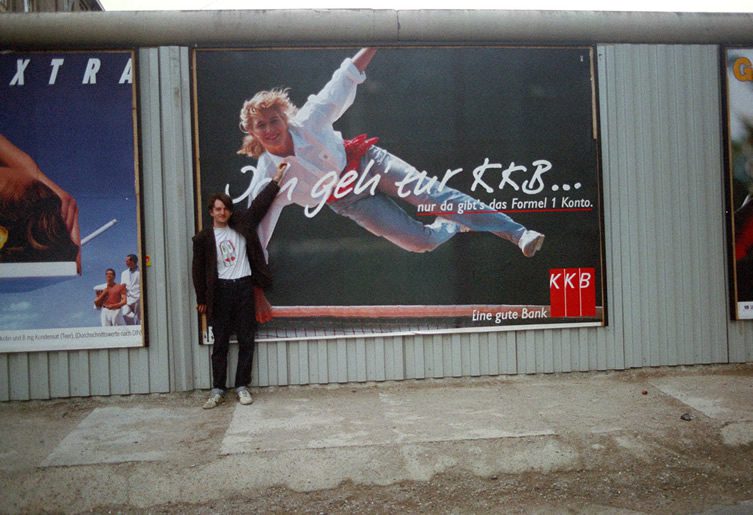 “This photo was taken in early 1990 near the Reichstag in Berlin. Here I am posing with Steffi Graf the famous German Tennis player. This was a very strange time for me to see that just a couple of months after the fall of the Wall it was already being used for advertising. These advertisements showed how the Western World had triumphed over the GDR and communism.” 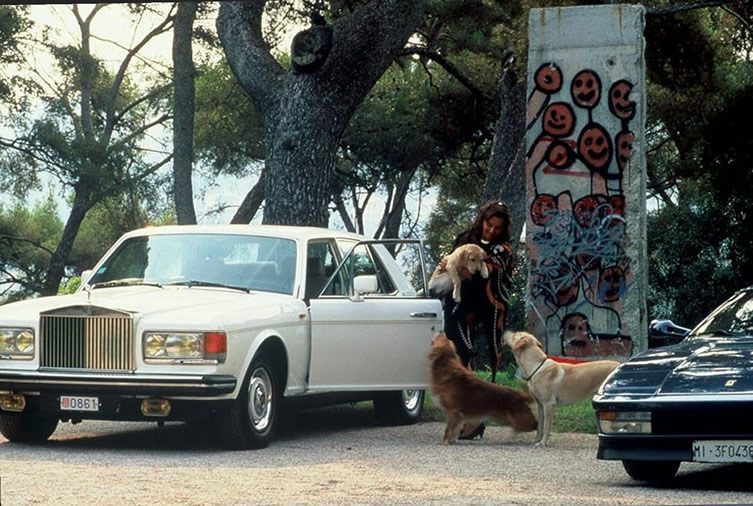 “Here you can see Madame Rizolli with a piece of Berlin Wall that I painted. It was purchased at an Auction in Monaco on the 23rd of June 1990. Soldiers from the GDR came to remove the old Wall pieces one day and they were taken to Monaco to be sold. In total my pieces of wall sold for $1.5 million and I received none of the money. To this day it is still strange to see one of my Wall pieces inside a private house in the South of France.” 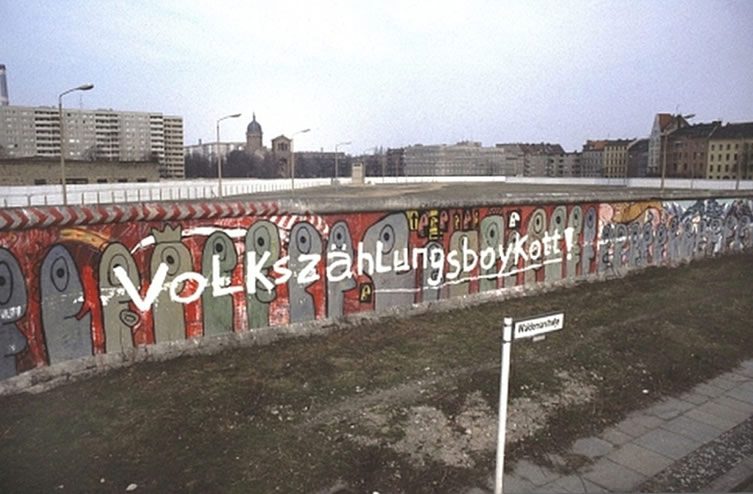 “This was a protest against the Population Census Boycott. Most of the citizens of Kreuzberg were against the population census of 1985 and the repetition of the heads makes the message stronger. That is why the person painted it there in the middle of my painting. I was very upset when I saw that in 30 seconds one stupid guy put his name just in the middle of the painting I made in three hours. Then I thought. What shall I do? Shall I sleep in front of the wall? Shall I call the police? In the end I just decided to repair the painting as quick as it was destroyed and this is what I continued to do.”