3D, that simple number/letter abbreviation, sends shivers down my spine. I think aliens, spaceships, horrific work from deviantART members. Interiors and architecture renderings so polished that blogs painfully confuse them with photography. Perspective reliant chalk drawings on pavements (they were mildly amusing when I first saw them, IN THE NINETIES!), computer games, Second Life, and virtual fantasies (that Is Tropical video was neither big nor clever by the way). Spectacles, Domino’s Pizza-stained Games Workshop t-shirts, ponytails, over-sized suit jackets… rendering, modelling… don’t even get me started on 3D printing.

And then, like a bolt from the virtual world, Long Island-born digital artist Shamus Clisset (aka Fakeshamus, aka Manifest Destinaut) gave me a zeros and ones-shaped slap around the chops – a bracing reminder that a book should not be judged by its cover, that every evil has flecks of goodness fighting to step out of its oppressive shadow. Clisset employs the traditional modelling techniques that so often make my stomach sink, but slathers them with pop culture references, smutty humour and lashings of irreverence. The New York-based artist conjures scenarios beyond the realms of LSD-induced hallucinations, his fantasy world surrealism using 3D modelling rather than letting the 3D modelling use him – in Clisset’s world, 3D thrives, he allows the software to roam free, gyrate and contort, dance across his dreams on cheese chimeras.

Allured by the magnetism of Lamborghini massacres, beer can vampire skeletons with brass tits and explosive souvenir-shop Dadaism; we caught up with Shamus to find out more… 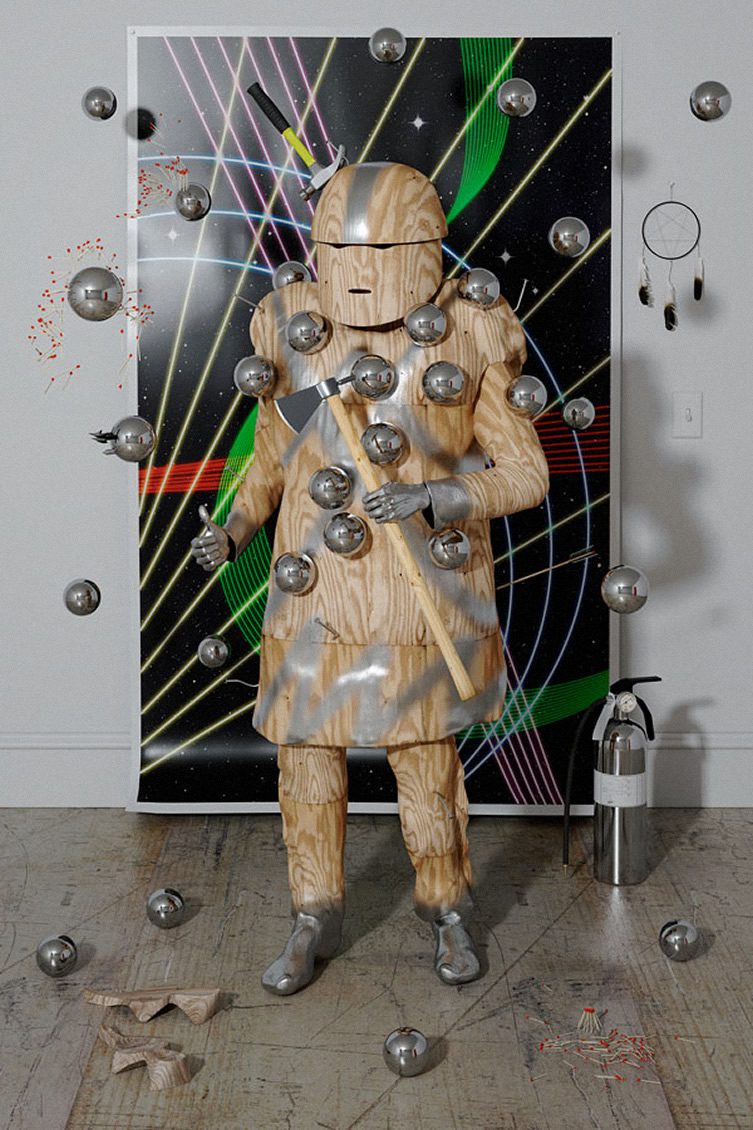 Hi Shamus, can you tell us a little about your background?

Hi, well how far back should I start? I was born on Long Island and had hippy parents who moved us out to Colorado when I was young. I developed a fascination with sports cars when I was about eight, and I obsessively drew pictures of the Lamborghini Countach until about the age of 13. That made me the kid in school who could draw, and subsequently made me the “artist” among my friends. I went to art school in Santa Fe, NM, where I got a BFA in painting. Then I spent 2 years in Berlin where I really got into digital art, and I’ve been doing that ever since.

FakeShamus started out as a kind of digital alter-ego. When I started working purely in 3D I started thinking of digital space as a new frontier, an alternate dimension defined by my own mental space. I created the FakeShamus character as an explorer in that new world and as a way to inject parts of myself into it. He’s a digital golem in that role; a mindless automaton doing whatever I tell him to. But over time I’ve started thinking of him more as a nemesis figure. I build the world and he comes through and destroys it. So “Manifest Destinaut” is a moniker I came up with reflecting those ideas – the idea of him as an explorer/conquerer in the deadly American frontier sense, but now in this new digital world. 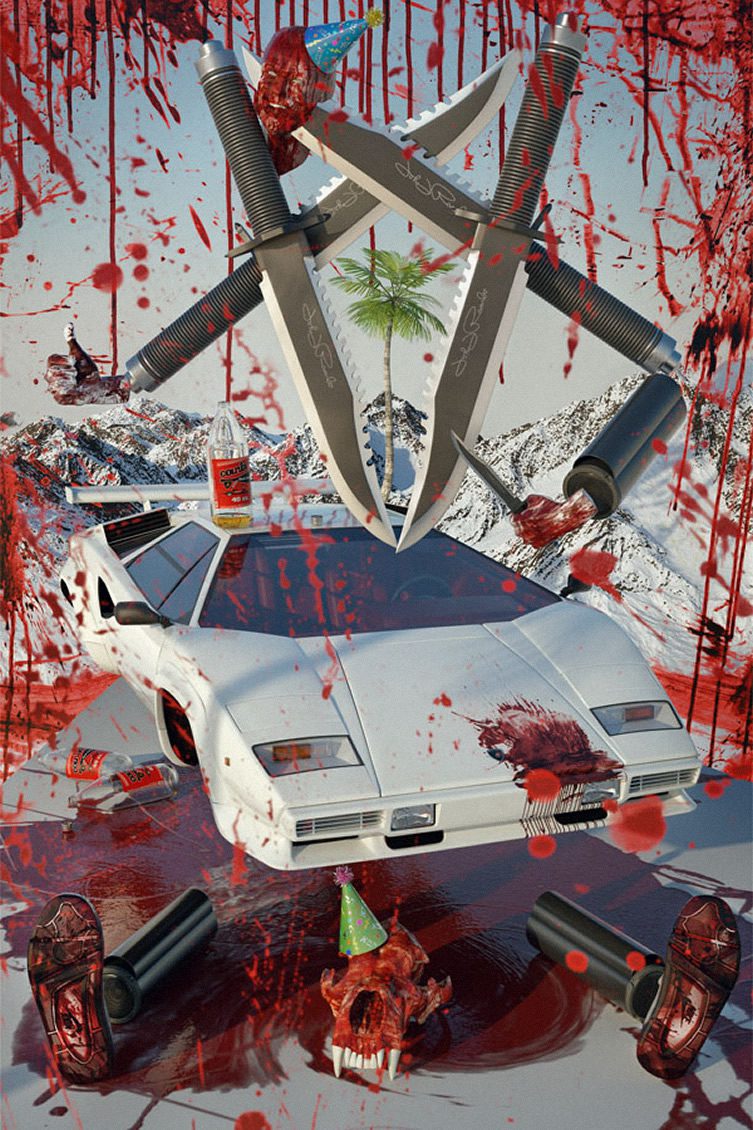 Can you tell us a little about the processes behind creating one of your works?

Everything is built from scratch in the computer, every object is modelled and textured and then arranged into the virtual environments and compositions you see. Once the scene is complete the object and material data is passed on to a rendering program, an unbiased raytracer, which does a physically accurate light simulation to create the actual photorealistic image. As far as subjects, sometimes the ideas start off with the idea of a single object, which triggers other ideas and the image builds in complexity. Sometimes the entire scene is clear in my head before I start. But coming from a painting background it always boils down to a particular image I want to see, so even though the scenes are modelled as totally three-dimensional spaces, I’m always thinking of the composition in terms of a strong final image.

I’ve always felt a little cold towards 3D modelling, thinking it lacking the warmth of traditional creative mediums – but you’ve changed my perceptions… what was it that drew you to this medium?

I think the trick with 3D modelling is that it’s really easy to make something that looks hard-edged and slick. The modeling programs excel at very clean geometry but it’s much trickier to make something organic. You have to do much more work to go in there and dirty it up and add all the detail that makes a believable world. Personally, the leap to 3D just made sense. I was working in other two-dimensional digital formats for a long time. I was always fascinated by the idea of making an image that was purely image, as opposed to material like paint on canvas, and I made a lot of abstract Photoshop pictures with that concept in mind. But eventually, to make the kinds of images I wanted, 3D was the next logical step. 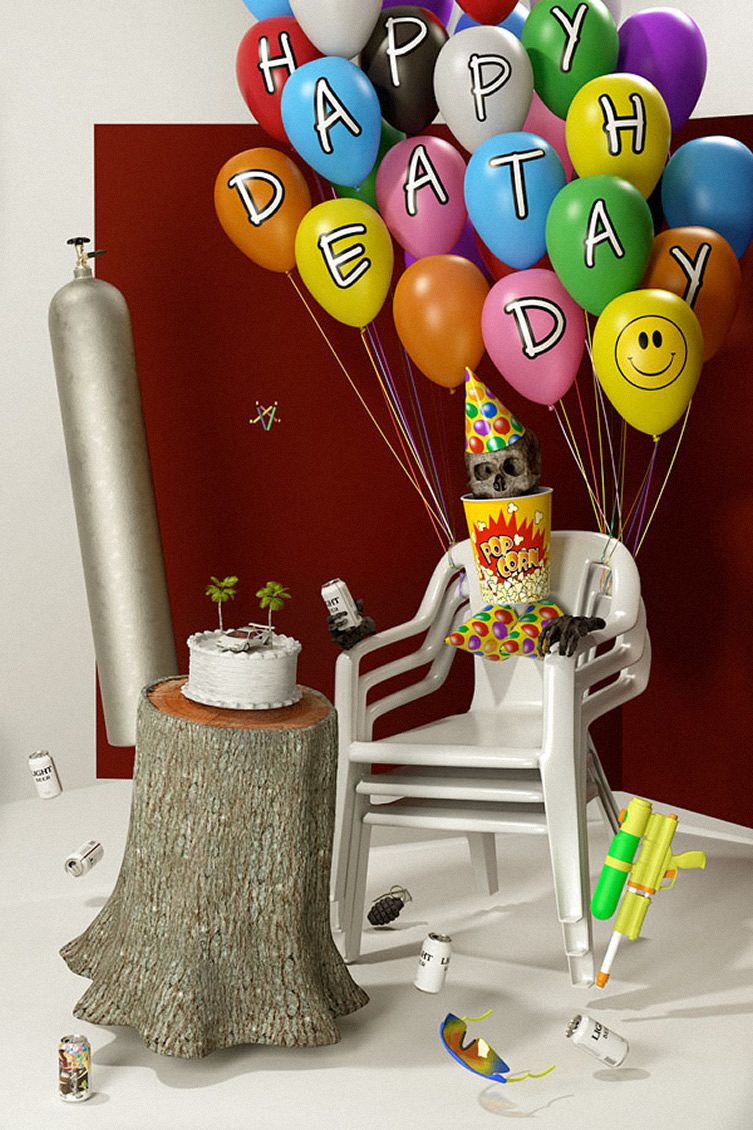 Who/what are your key influences?

These days I look less to art, or specific artists anyway, and more to the relentless flow of images that are all around us. The internet has taken that to a whole new level and I am constantly trying to make stuff that can compete with all of the absurdity, craziness, scariness and humour out there. At the same time I’m trying to transcend the throw-away nature of that deluge of images by making things really iconic and complex. I hope to make things that last and I think you have to put the time and thought into everything for that to work.

Sport, beer, dick jokes and fast cars… there’s a lot of boyhood referencing in your works. Are you still just a big kid, or is there any deeper commentary behind the scenarios you’re creating?

Sometimes a dick joke is just a dick joke, but what I like about that is letting the big themes coexisting next to the “low” humour. In my perception of the world it’s all kind of equal. I can appreciate the deep stuff while recognising that none of it really matters (at least not as much as some people want you to believe). In a way it’s like an identity/superego thing that’s playing out in my mind all the time. The “boyhood” aspect of it has more to do with the feeling of discovery I had during those formative years than with specific references, though. Some of it is very personal but in the bigger-picture sense it’s about an urge to see or experience anything new or “futuristic” which is what I still look for in all art, music, whatever… 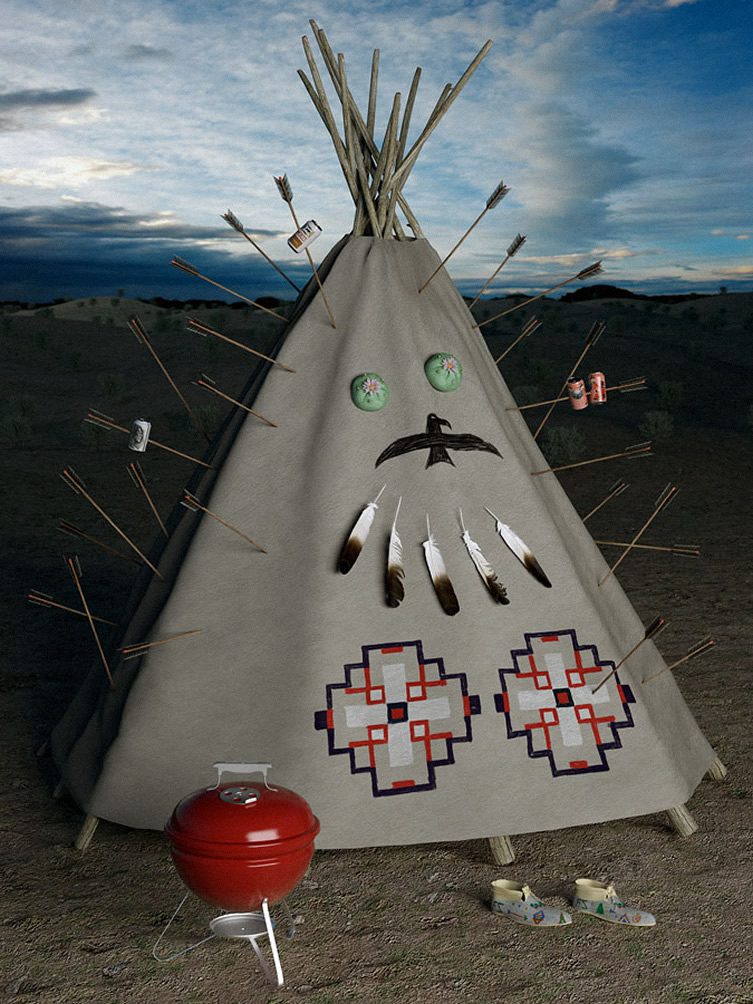 I see hints of the retro-internet-art thing going on in your imagery – where do you see your work sitting in the spectrum from web culture to high art gallery work; and who’s the typical Shamus Clisset fan?

I think I might have more fans on the web-culture side right now, but it’s mixed. I think there’s an openness to any and every type of image and idea in that internet-art culture, the only qualifying factor is “awesomeness” which I can relate to. That said, most internet imagery is consumed so quickly and fleetingly, it’s kind of depressing to think of putting any real time into making complex things. On that high-art culture side there tends to be an expectation for the work to hit certain conceptual points or to reference other high-art milestones, which makes the whole thing a sort of linear puzzle, which, once you get it, makes the work instantly obsolete.

Ironically it becomes a sort of “I see what you did there” internet moment. Ultimately I’m not too concerned with how my work fits in to any spectrum, I just want to make things that you can revisit and see and think about from high and low and all different angles. 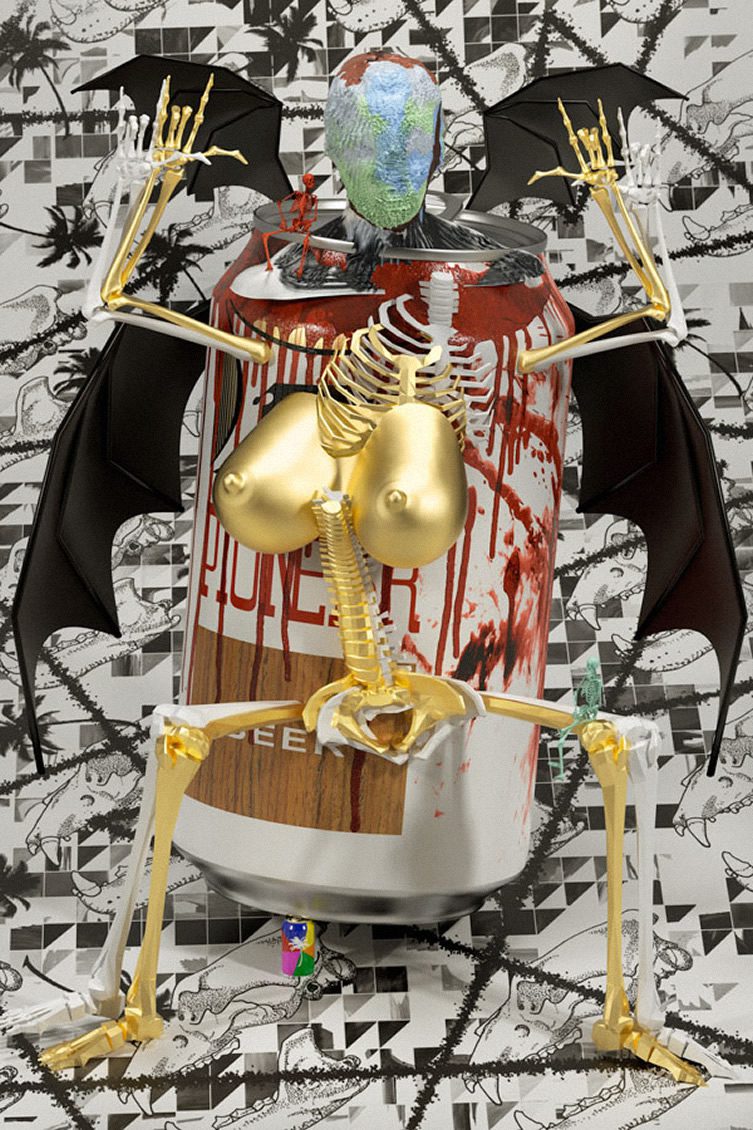 If you could send one iconic design to another planet to show off our exploits in creativity, what would it be?

I think I’d send the monolith from 2001: A Space Odyssey, just to mess with the aliens’ heads.

I’ve kind of gotten obsessed with re-watching Star Trek: The Next Generation on Netflix. It’s just a damn easy show to watch…

Well, we just closed 2 shows that opened here in June at Storefront Ten Eyck, and Lesley Heller Workspace. And I was in a group show, No Name, at On Stellar Rays Gallery that ran through July, so I have been busy with those. Now it’s sort of back-to-the-studio time and I have a lot of new pictures in the works, so stay tuned… 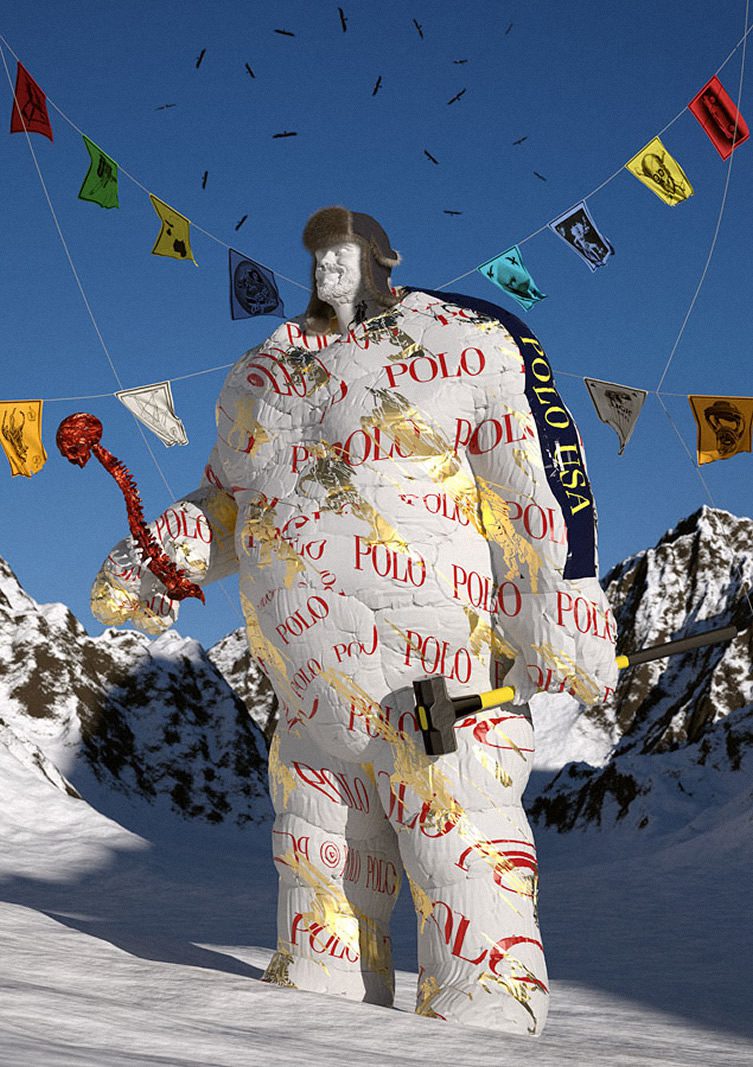 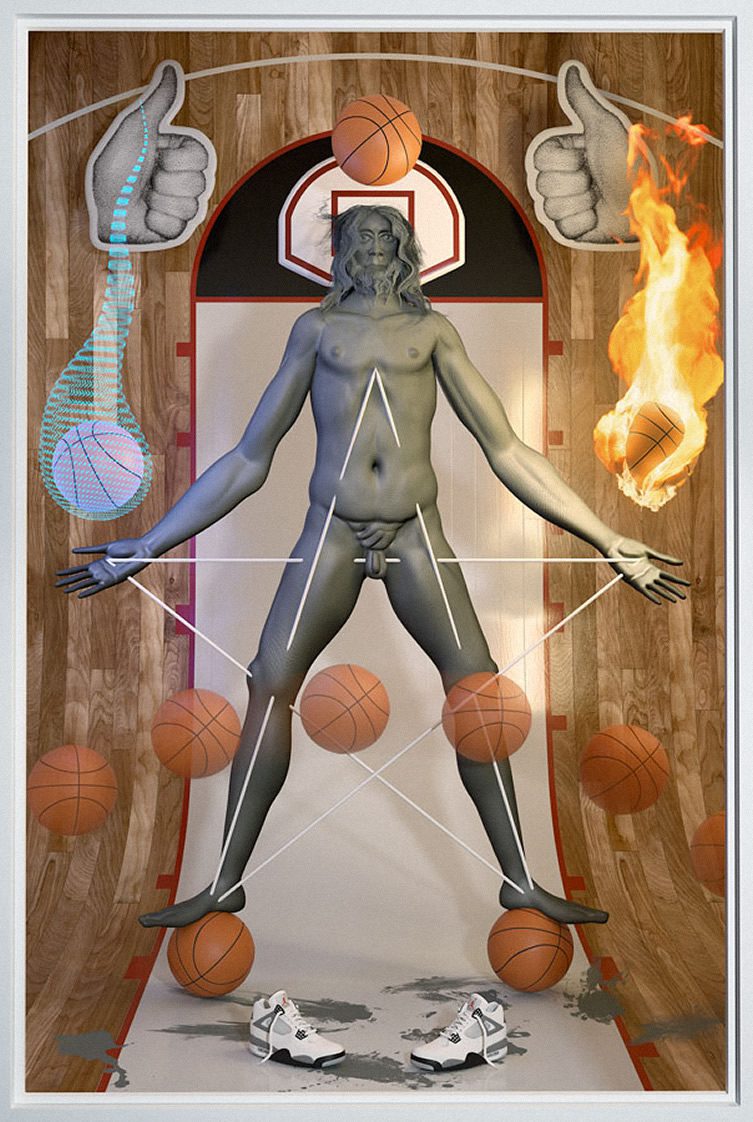 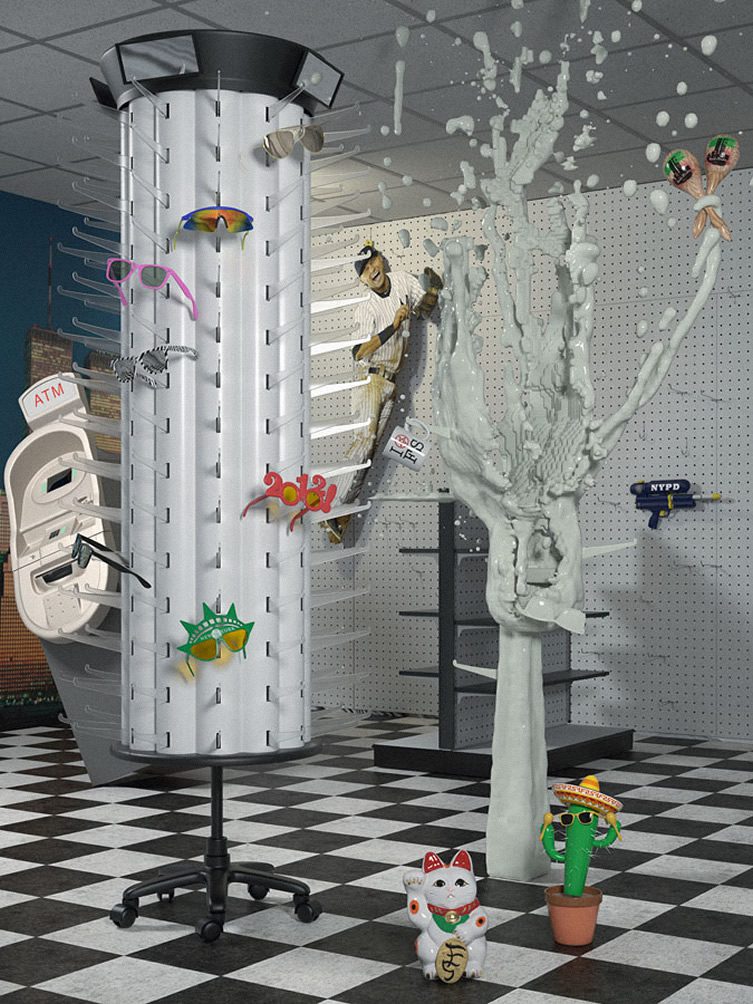