Looking for a little escapism following a series of private and work-related setbacks a couple of years back, American artist Jacinda Russell set about combining two of life’s most enduring mood-shifters; cake and inviting water – what personal issues can’t be sorted by a slice of sponge-cake and a dip in an azure ocean?

Two of Russell’s favourite artists had previous in these instruments of eternal feelgood factor: mid-20th century pop artist Wayne Thiebaud painted rich, luxurious desserts, whilst Ed Ruscha’s work of the same era focused heavily on photographs of alluring swimming pools. Needless to say, if Russell wanted to work herself out of this rut, she’d combine the carefree buoyancy of the famed duo.

And that’s just what she did – Nine Fake Cakes & Nine Bodies of Water is a fascinating body of work… art for the sake of happiness and emotion, not necessarily steeped in concept, over-thinking, or pretention – art for the love of it. Won over by the dreamy escapism of her series of photographs and postcards (more on those in a bit), we spoke to Jacinda to find out more… 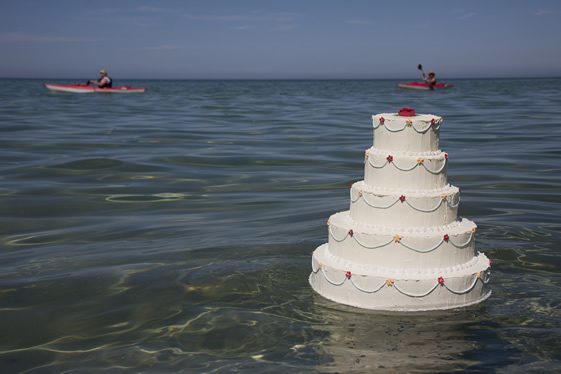 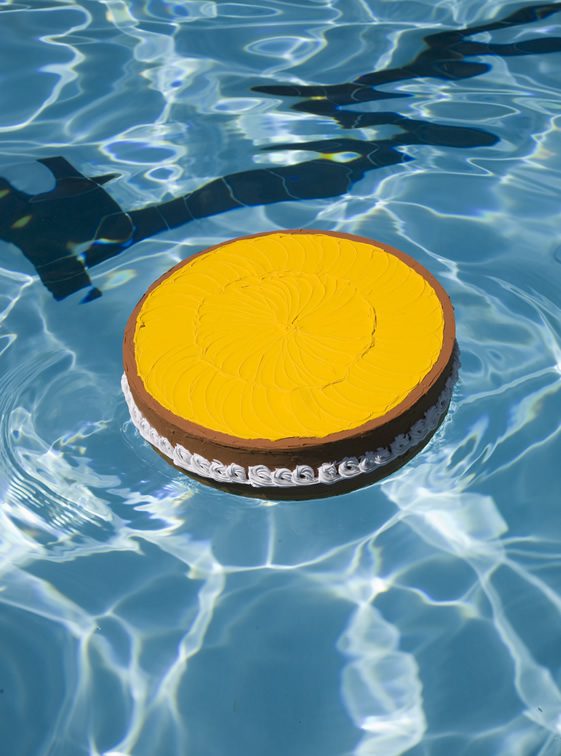 Jacinda, where are you from, and where do you live/work from now?

I was born in Boise, Idaho, attended graduate school in Tucson, Arizona, and have lived in Houston, Texas, Portland, Oregon, and Muncie, Indiana. The Pacific Northwest is the place I call home though I currently live quite far from there. By day, I am an Assistant Professor of Photography at Ball State University and by night I am an artist fighting for the time to finish the 3-5 bodies of work I am simultaneously creating.

This series, like most of my work is about loss. Two years ago I wrote this about Nine Fake Cakes & Nine Bodies of Water and it still applies: “Spring 2010 featured several personal and career related disappointments and for the first time in my artistic life, I was devoted to a project thats main premise is beauty, escapism and desire. Complete immersion in finding inviting bodies of water to float Styrofoam and acrylic-tinted, caulk cakes was a coping mechanism to come to terms with loneliness and unhappiness with place.

Cakes – both real and fake – appeared to make people happy and I wondered, most simply, if they could make me happy too.

I struggle with the landscape in the Midwest. I am constantly dreaming there is a white-capped mountain behind the cumulus clouds on the flat horizon. Clear water represent an ideal and living far from that is quite disappointing.” 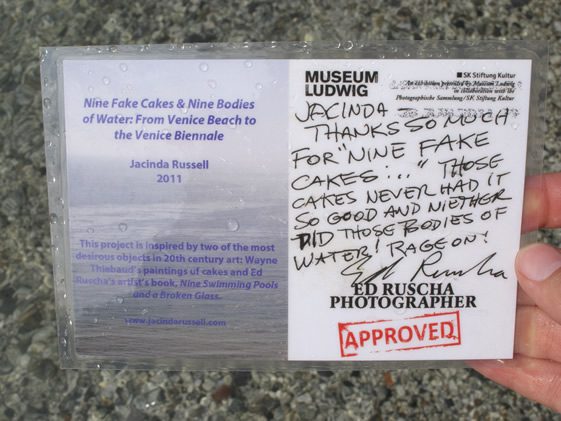 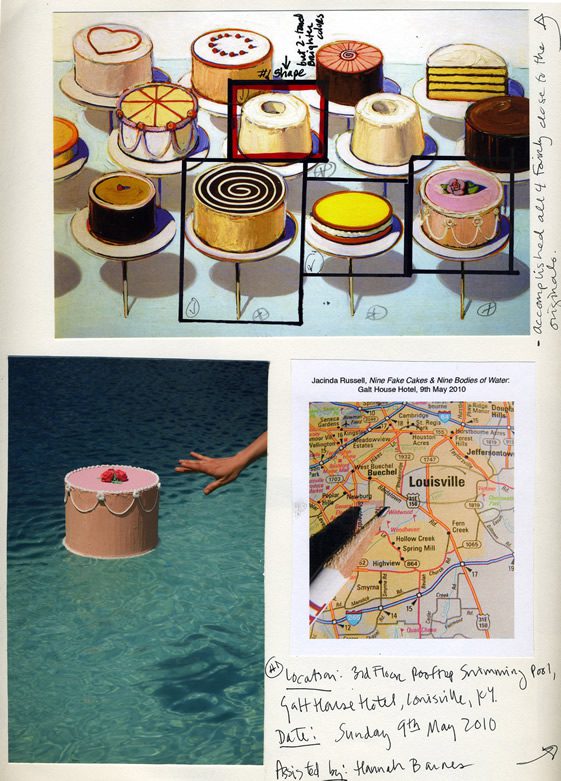 What was the idea behind the postcards?

I am on the board of directors of the Postcard Collective and have always been interested in using the mail system as an art form. I also wanted to make a product that commented on the creation process. I didn’t reveal what the final images were until all of nine of the cakes were photographed, but the 30-35 people receiving postcards saw a sneak preview.

After each float, I edited and selected the final photograph (this proved to be difficult choosing one as witnessed by the several outtakes found in the book). I placed emphasis on the back of the postcard – the information it revealed soon became as important as the image on the front. It was essential that I sent the postcard from the next location where a cake would be photographed, offering another hint of what was to come.

What is it about Wayne Thiebaud’s work that has inspired you so much?

My parents are Californians. My father is an artist who went to school in Southern California. I often thought that my artwork had a Californian aesthetic, and it was high time to devote a series to my favorite two 20th century Californian artists – Ed Ruscha and Wayne Thiebaud. One of the first things I had to draw in undergraduate school was Wayne Thiebaud’s bubble gum machine.

I saw a retrospective of his work at the Fort Worth Modern in the early 2000s and found it both desirous and delectable. I love how his use of texture is authentic to the icing he is painting on his cake photographs. On a side note, it was quite thrilling to discover that caulk had the same effect when constructing the Styrofoam cakes. 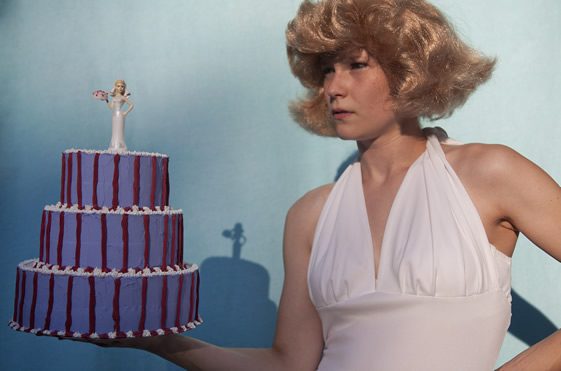 Niagara Falls Outtake photographed in Muncie, Indiana
(in case the cake was lost over the falls), 2010 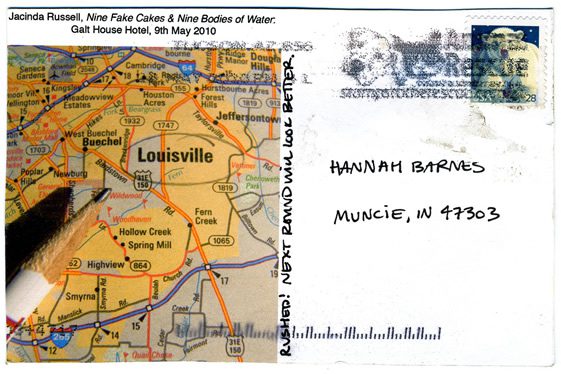 Hmmm… that’s an interesting question. The word “whatnot”, people in water aerobics classes that exercise their jaws more than the rest of their bodies (yes I just returned from swimming laps at the pool), pollution, humidity, people who don’t recycle; and airplane delays resulting in missed connections.

I’m pretty fond of the present, though if I had to choose – I’ve always wondered abut the era when the American West was settled. What would the Olympic Peninsula look like without clear cutting? How differently would one view the Southern California coastline without houses? How clear would the water and air be without industry? Those are questions that would be answered only while living in the 19th century.

What are you working on now, and what’s next?

I started photographing clear water samples last year when I began a project entitled From Venice Beach to the Venice Biennale. So far I have representations from Europe, the East Coast and the West Coast of the United States. I’m in the process of figuring out where this is going though it might involve exposing photographs onto glass. In addition, a series called A Tale of Two Obsessions: David C. Nolan & Marilyn Monroe and Arline Conradt & the Cat Scrapbook has occupied much of my time this year. It explores one man and one woman’s fascination with the found image, their methods of archiving and organization, and the perversity of their actions. 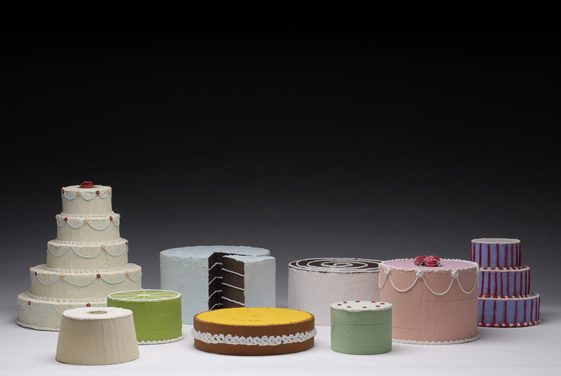 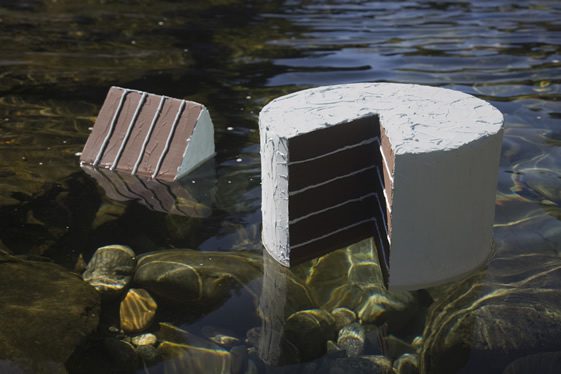 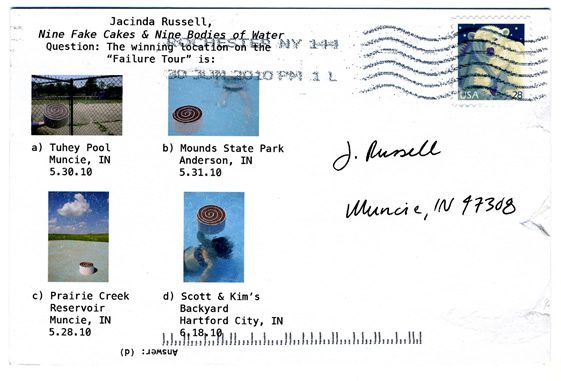 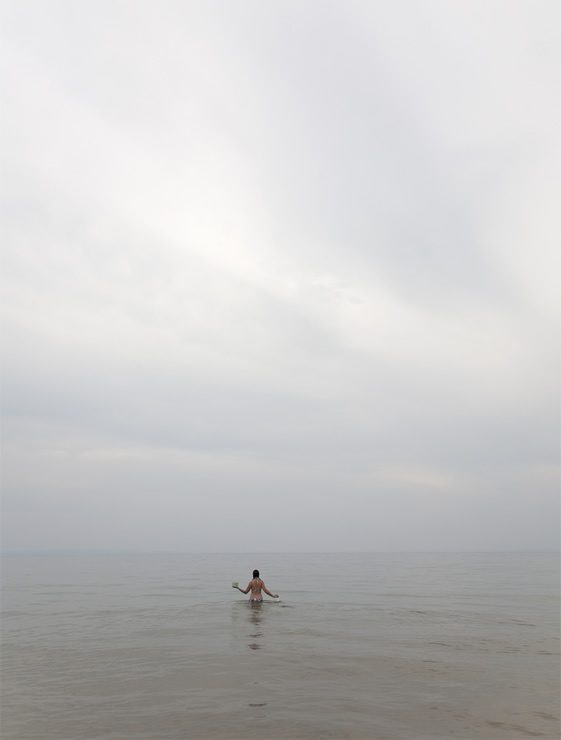