Too. Cool. For. School. German illustrator Kirsten Rothbart‘s style is every bit the real-world embodiment of the subjects she depicts. Tattooed rock chicks with pastel locks and vintage store couture, stoned hipsters drinking cheap spirits from the bottle… if Rothbart’s illustrations were people, they’d be waking up on a stranger’s couch in West Hollywood, hazy memories of playing a gig to 30 or 40 equally beautiful film director’s daughters the night before.

As we use a shoe horn to cram our 30-something thighs into the tightest pair of jeans we can find, crank up a dusty 12″ of Melvins’ Gluey Porch Treatments and sob into our neat bourbon at the looming realisation we’ll never hook up with one of the hot chicks in Kirsten’s illustrations, we caught up with the German wunderkind for a chat about art, music, and hidden talents – we even get a peak inside her workspace… 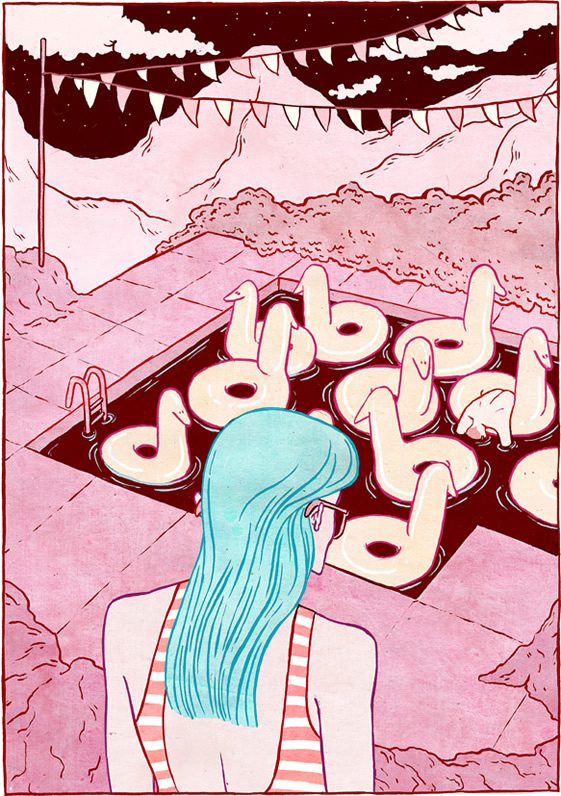 Kirsten, where are you from, and where do you live/work from now?

Hi, I’m from the very north east of Germany. Born and raised by the sea in the country. After I was done with school I immediately moved to Kassel, where I live and have studied since 2008 at the School Of Art And Design Kassel.

What is your earliest memory?

My earliest memory ever? Umm… well I remember one thing. My mum, my sister and I were heading somewhere in the car. And I also remember the street we were riding along and all the traffic lights. That’s about it. I was probably 2, 3 years old. 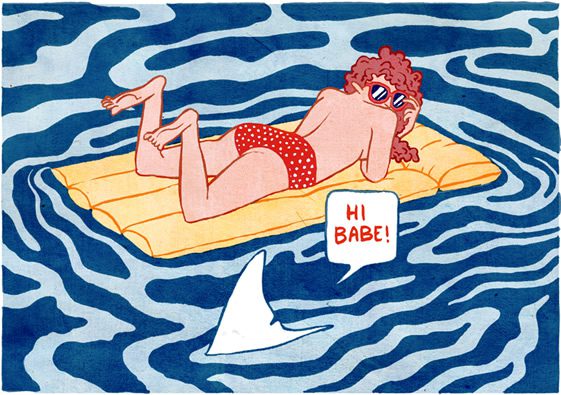 Do you see yourself more as an artist, or an illustrator – is there a distinction?

That’s a question I’ve been thinking about myself lately. And honestly I’m not quite sure. I think I am an illustrator most of all. But that doesn’t mean I’m not an artist as well. To me illustration is a variety in art, just like sculptures or traditional paintings. When working on a drawing or a comic story it is quite the same creative process as in any other part of art. You start out by sketching ideas and developing the composition, and the content of the drawing or the panels. And then it takes a few tries or sometimes the piece of work just evolves.

I think what makes this question so difficult to answer is that illustration can also serve a range of purposes. Before I started studying illustration I never made a comic story. What I did was draw single illustrations or paint canvases, and I think this can still be seen in my current works. I focus much on telling a story within one picture or one scene. I work kind of iconographic I think, but always in a very pop-arty way. I think my ideas come up the same way as a painters ideas come up. It’s just that I choose illustration to be the way I put out my ideas.

What really makes a difference to traditional art is that I can use my skills and works in a commercial way, which is often seen as selling out your talent. But I think as an illustrator who works for clients as well, you should always consider to stay creative and – just like in design – make your work something that has depth and skill and something personal and outstanding that can be part of every day life.

So, I’m sorry for this huge explanation – I’m not entirely sure what I am or if I have to differ really. I guess I’m both in a way. 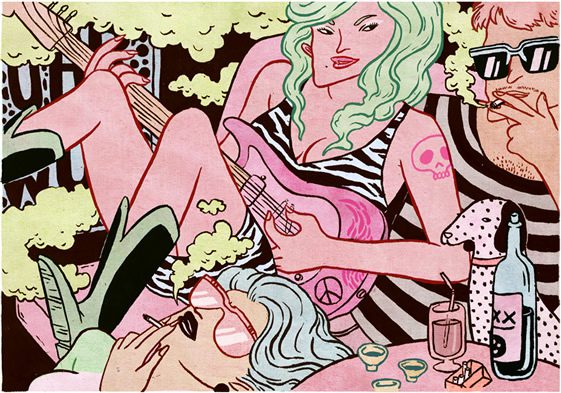 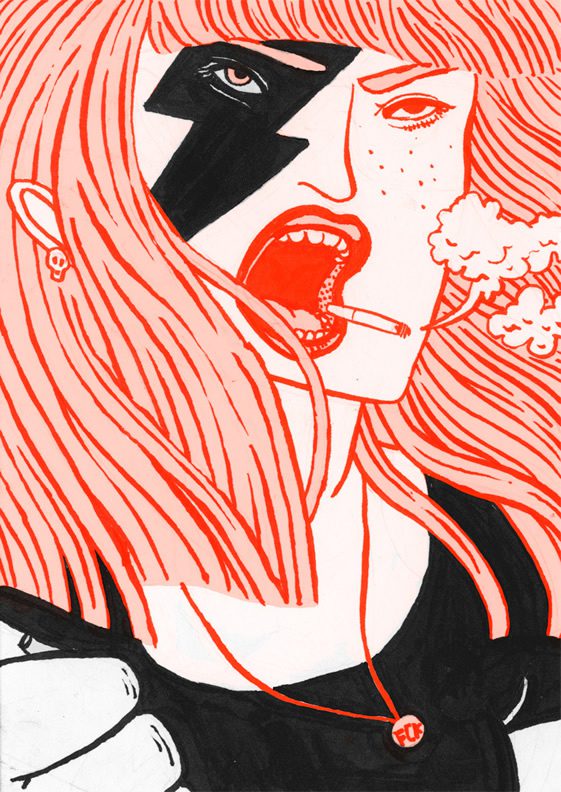 Mostly my ideas come up just like that. But also I’m inspired a lot by movies, music, photography or just life itself.

There’s a definite rock and roll vibe that emanates from your work, is there certain music in your mind as you’re creating particular illustrations?

As a teenager there was one thing that I was really obsessed with. And that was music! I so wanted to be a musician myself and I took a lot of time listening to rock music. I think I just wanted to become a rock musician. Which I still would enjoy. But frankly, in that field I am terribly talent-free. So I just love portraying musicians and their way of life. Or what I think is their way of life.

When doing an illustration like that I listen to all kinds of stuff. Like ’90s alternative, funk, psych or Brit-pop.

Galleries, definitely. To see other artist’s output always gives me the urge to do something myself. And then cinemas as well, or theatres. These places cartoon real life so nicely and precise, that it always encourages me to take a look at the little and big moments in life and to realise what they’re really worth. 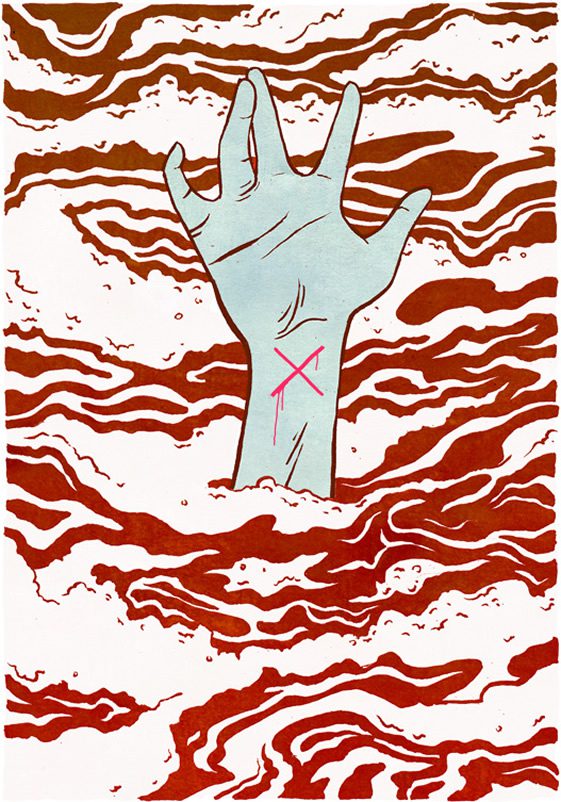 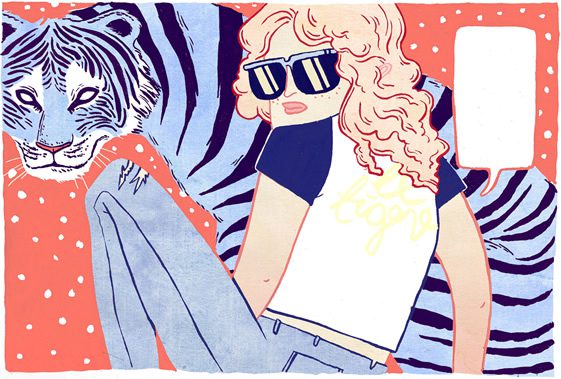 If you could send one iconic design to another planet to show off our exploits in creativity, what would it be?

I think I would choose the design of the Fender “Strat”. Haha. Music, again.

No, seriously, to me the electric guitar, especially this certain design, represents the spirit of humanity. It’s a design that combines complexity and wildness. It’s an instrument that needs skills and practice to be played well and also it gives you a wild, arty, rebel-like appeal. If people from another planet could see it and understand it they might realise that humans have a need for beauty (since it’s just an awesome design) and creativity (by playing the instrument) and the need to implement your personality. It’s a design, made to create music, which is art in the end.

What art could we expect to see hanging in your home?

In my home, currently there’s a hanging print of a Jack Vettriano painting, random photographs of landscapes and people, and a silkscreen print by one of my friends. I tend not to hang too much. 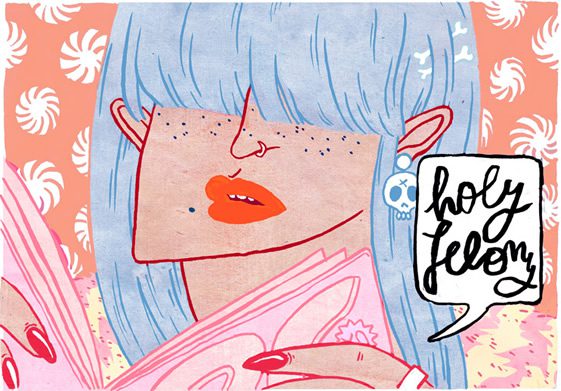 Have you any hidden talents?

I like to photograph. But I don’t know if I’m any good at it. Next to that, humour maybe.

My greatest fear is to spend my life doing something that seems pointless.

I would like if people remembered me as a person, a woman that achieved something good. And who did it all by herself and worked hard for it with all her heart. And as a person that loves/ loved life and tried to understand it by capturing it, partly. 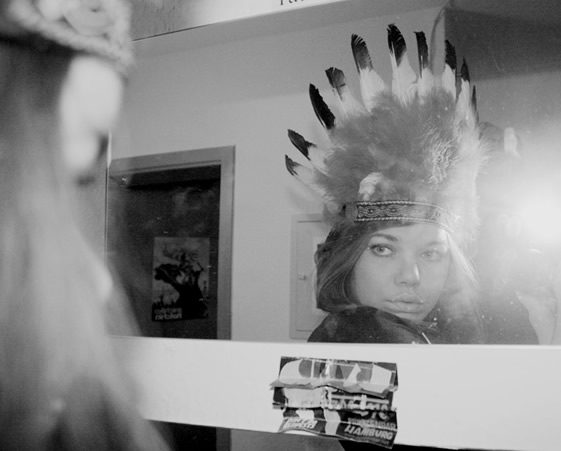 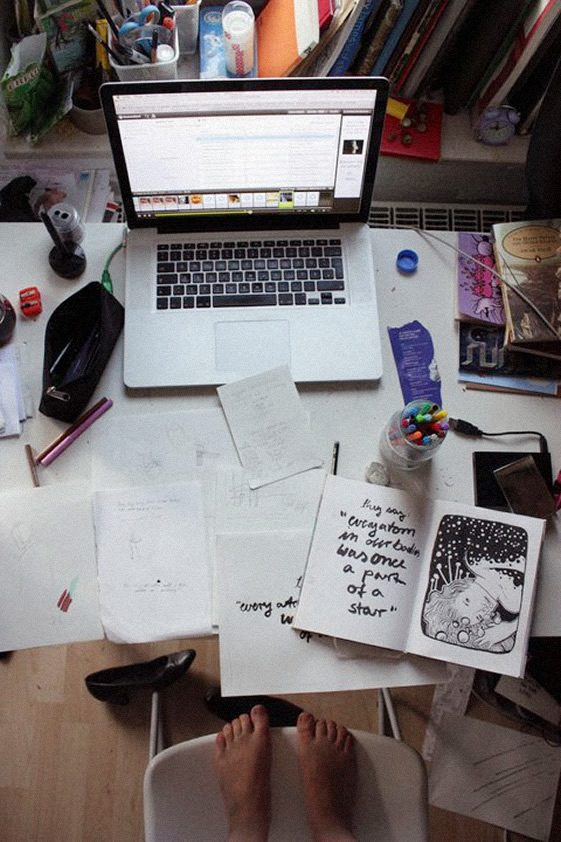