Canadian photographic artist Mariel Clayton has a decidedly unique style – and more than a little of what some may call, ‘a dark side’. Laboriously concocting twisted scenes of murder, rape, child abuse and torture with, erm, Barbie dolls, Clayton has won as many accolades for his work as he has gasps of horror and disapproval, so – he must be doing something right. We think he’s a bit of a genius, if of course a little twisted – but then aren’t we all? – so decided to drop him a line to discuss his meticulously assembled work in more detail… 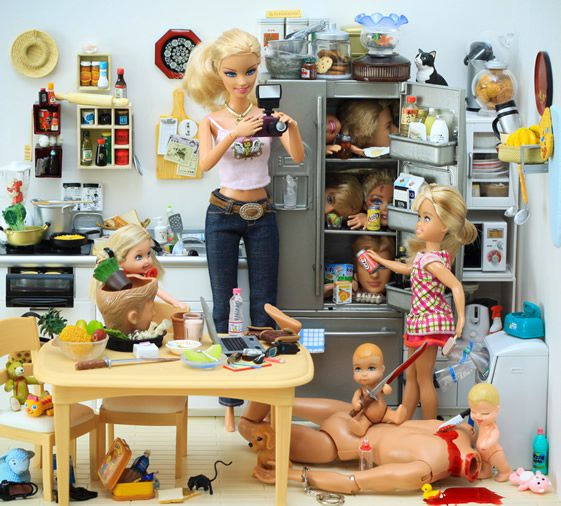 How did you get into photography and how long have you been working with it?

I’ve always liked taking pictures, but I only got seriously into photography as a hobby about 4 years ago – and again mainly travel photography. I’ve been taking pictures of the dolls though for nearly 2 years now.

What was the inspiration behind your doll photography?

I honestly just thought it was really really funny. 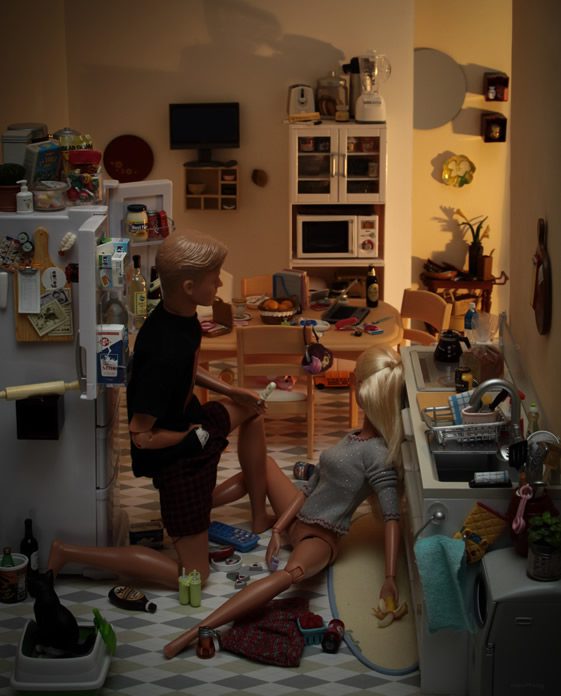 How much time and work goes into each shoot?

It’s tough to say! It absolutely depends on the complexity of the piece, and whether I need to make anything for it. For a regular ‘Homicide Barbie’ shot, it usually takes about a minimum 5 hours or so, to set everything up. While I am composing a shot, I constantly stop to look through my camera and make sure everything is lining up the same way through the lens (I learnt this the hard way, your perspective when you’re sitting at a table is not the same as a camera view). If it’s any of the ‘Hystoria’ pieces – those took a lot longer, about 10 – 15 hours or more. For those I had to make some of the props, costumes etc. It’s hard to say exactly the length of time, because I’m not really paying attention. With most of them I also have to stop, go to work (cursed day job) sleep etc…. 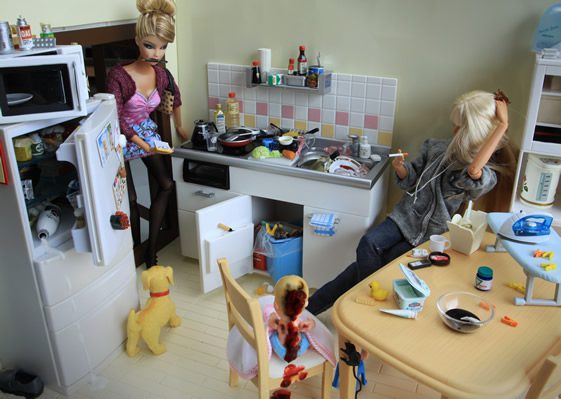 The case of Baby P

Is there a message, or messages behind the images?

No message at all for most of them. If I have something specific to say in a picture – I will always state it in the title or in the description. For all of the ‘Barbie Murderess’ shots I have no specific message or manifesto – I leave it to the viewer in interpret the way they want to. For me, the interest is seeing how peoples minds react to what they are seeing – that is the best part. 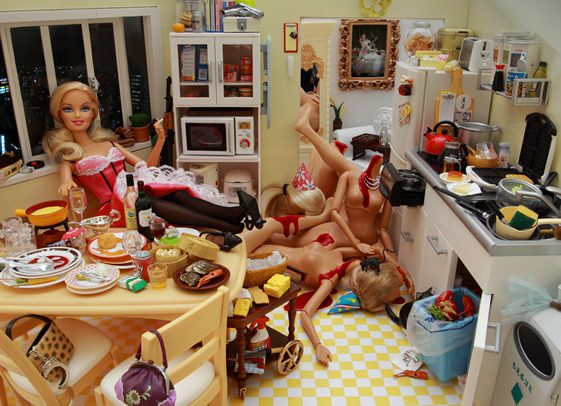 She loves dinner parties the leftovers last for days

The ‘Barbie Murderess’ shots are especially gory – how and why did you come up with this concept?

I used Barbie as a prop before (being beheaded by Ninja Turtles etc.) because I never actively set out to develop this type of ‘style’ of pictures. The first one I did, with Barbie committing suicide in the tub, was more a visual ‘gag’ – something I thought was really funny. My friends loved it so much that I wanted to do more of them, and so I kept on with the theme.

I’ve always been fascinated by the inner machinations of peoples minds. I’m intrigued by sociopathy and the whole outer facade/inner workings concept and how the two don’t always correspond. Barbie, as the ultimate stereotypical feminine icon just seems to lend herself to an alternate portrayal. I think because she has been idolised as the epitome of everything that is ‘good’ about being female, being sweet and docile and taciturn etcetc.

She has been sanitised to the point where she has absolutely no pesonality whatsoever, so she just seemed to be the perfect model to explore the idea of this hidden evil. There was no time really when it wasn’t conceivable for me to use her in the pictures, it just makes perfect sense. Nobody is ‘that’ good, ‘that’ perfect – everyone is flawed in some way, and I wanted to explore that. 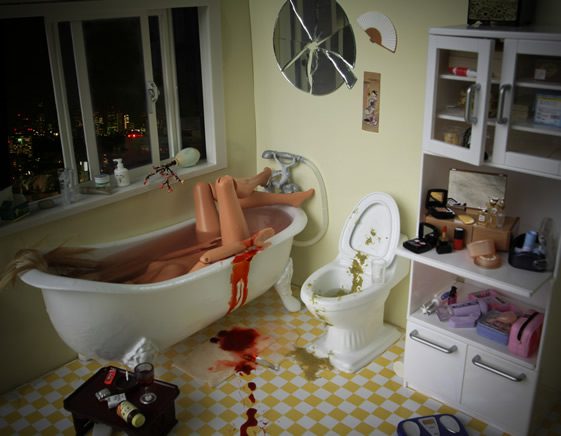 If you could shoot any location or object (or both) on the entire globe – where and what would it be?

I have no idea… I can’t narrow it down!!! There are so many places I would love to go and shoot. If I could do anything, I think it would have to be in the archives of the British Museum, I would love to go and shoot all the relics that they never put on display. Or if it has to be a place, I would really like to up to northern Scandinavia – take the Hartigruten ferry around the coastline. 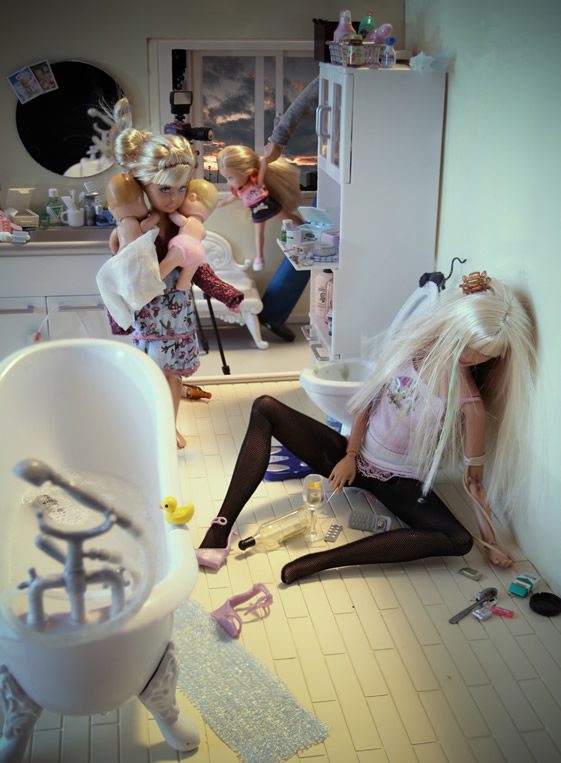 Who have been your major influences and what’s next for Mariel Clayton?

I think my biggest influence would have to be an English cartoonist named Carl Giles. He was a one-panel cartoonist who started out during World War II and carried on right up until the ’80’s. He was a master of subtlety and detail – and he was able to combine not only the main visual ‘gag’ but lots of smaller ones within the frame. I always think of that when I’m composing something – to try and pay attention to the details. I have no idea what’s next… truly. I make a point of not to think too far ahead, because I never know what’s going to happen. I like to let things unfold. So right now I will just keep doing what I’m doing, and as new ideas come along I will explore them! 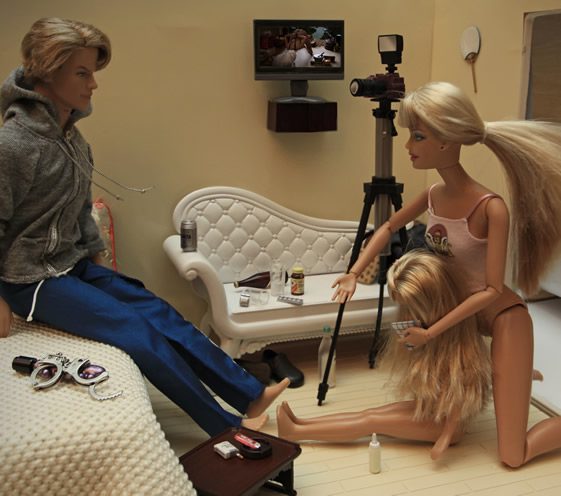 The Barbie and Ken Killers