Historically, anything that plays an important role in a society is likely to be a frequent subject for its artists. Neolithic man painted the animals it hunted. The Tudors painted their Kings and Queens. Londoners like me have always tended to paint the Thames. When I find myself painting the Thames, I often find myself struck by its constant variations, be it the light, the buzz on its banks, or the water itself.

For early Londoners, the Thames was a barrier preventing the plotting enemies from invading. As a result, it features prominently in early maps and depictions of historical events. As a source of water, the Thames was also a source of life, providing essential resources to the people who settled by its shores. Over time it has been used for travel, commerce and recreation. All areas of life with a close association with the visual arts. 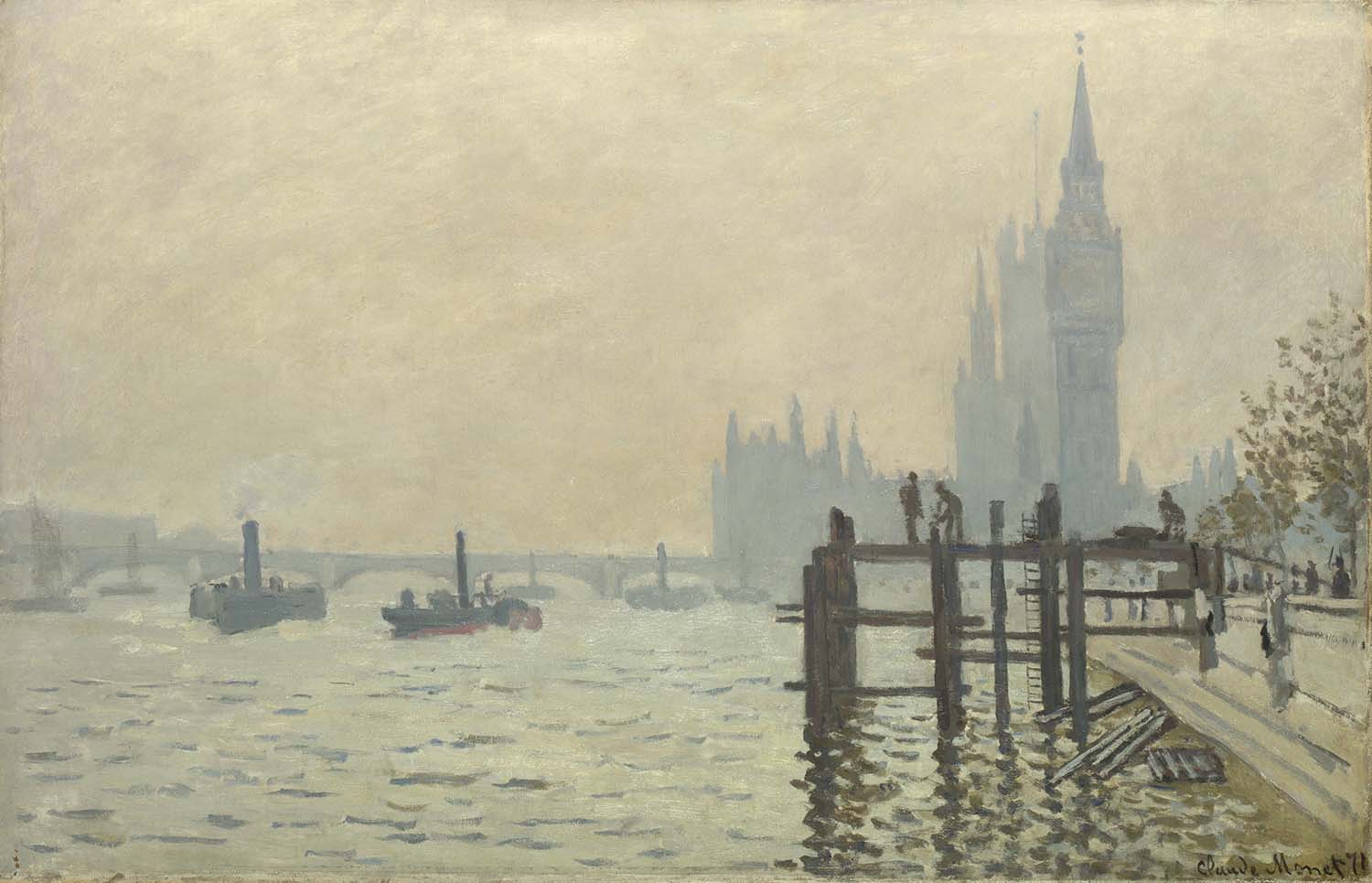 Claude Monet, The Thames Below Westminster.

The Thames Below Westminster

The first time I felt overwhelmed by a painting of the Thames was when I stood in awe in front of The Thames Below Westminster (1871) by French Impressionist Claude Monet at the National Gallery in London. Monet was seduced by the misty sheen of London’s air. He produced a whole series of works painted from his hotel room at the Savoy, which happily enough overlooked the water.

The Thames Below Westminster is a good example of what the Thames has to offer for an artist. In the background, one can appreciate the faded figure of the Houses of Parliament, at the time a relatively new set of buildings, designed in the fashionable Gothic Revival style. Monet was in fact the first non-English artist to paint the restored Palace of Westminster after its reconstruction in 1860, following a fire that destroyed the previous building in 1834. Strikingly modern but with a curiously medieval character, the shadowy outline of the buildings give the piece an uncertain and confounding historical resonance.

Another striking element of this painting is the heavy haze merging with the water, creating an almost undistinguishable palette. This is a theme in Monet’s London paintings. In his 35 paintings series of Charing Cross Bridge from the same view point, he explores London’s daily life around the Thames. The misty morning fumes represent the activity of the factories. While the traffic on the river reflects the port of London’s buzz. The world busiest port at the time.

Monet, who said that ‘London without fog would not be as beautiful’, was interested in England as the engine of the Industrial Revolution. Perhaps he was ahead of his time. Paying as much attention to the fumes created by the great machines as the technological advances they brought. 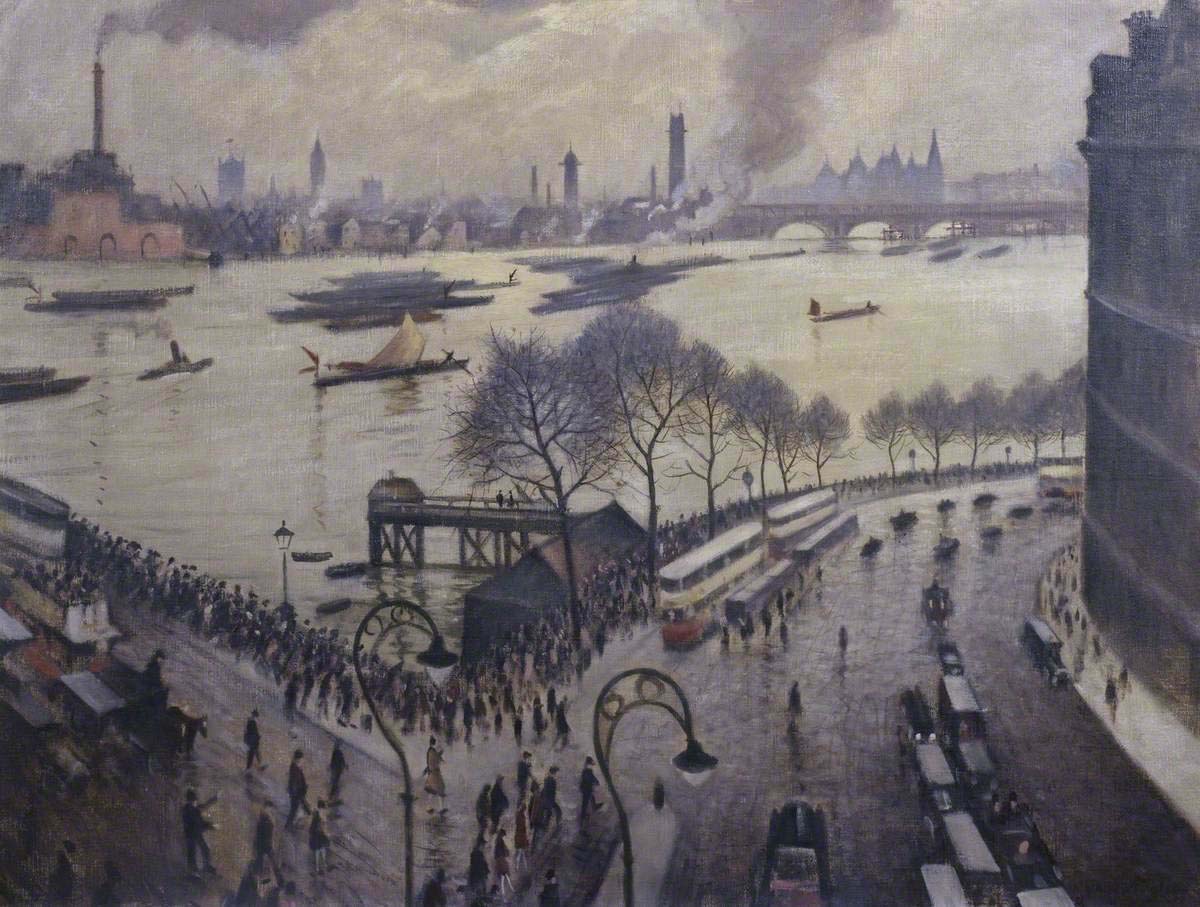 Radically different in style, C. R. W. Nevinson also devoted multiple works to pictures of the Thames. With lines and perspectives evocative of the Futurists, his works also veer towards Cubist and Vorticist stylistics. His Blackfriars Bridge (1927) is a remarkable example of Post-Impressionism city depiction.

The clear division between the streets and the water shows the Thames as a place of movement, interactions and social encounters. Painting the Thames can be an opportunity to picture historical landmarks like as St Paul’s Cathedral or the famous bridges, but Nevinson’s framing obscures the most recognisable landmarks. He favours another fundamental aspect of the river, its social life.

The Thames runs across London from West to East and embraces the characteristics of each neighbourhood it touches. Here on Blackfriars Bridge, we can see the crowds and cars, probably travelling for business. In the background, one can recognise the bustling activity of the many factories on the shores of the river.

Unlike Monet’s, this non-romantic depiction of the Thames highlights a new era. An era in which cars streak across the canvas and thick ribbons of commuters on foot make sharp angles. Instead of placing the imposing monuments as the main objects of interaction with the Thames, the population starts to own the space. Here, again, we see the colours of the water reflected in the sky. But in Nevinons’ painting, instead of forming the primary subject of the painting, it serves as space to be filled. To cut across with streamlined boats or to cover with pollution.

In more recent works, artists have tried to manipulate the idea of large spaces as freedom spaces. And in the last few decades, London’s skyline has changed dramatically. 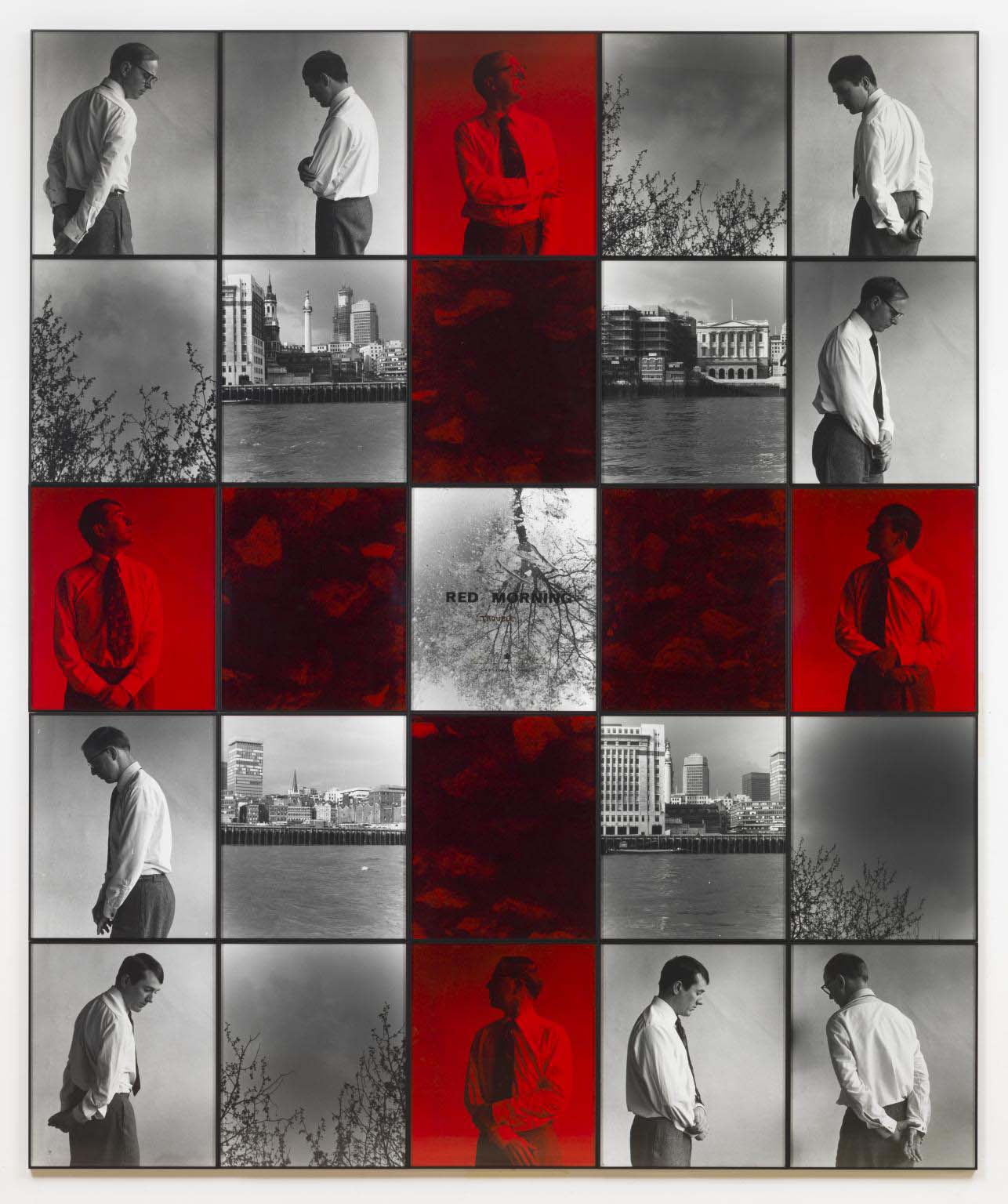 In their work Red Morning Trouble (1977), used red-tinted pictures of concrete, perhaps to evoke claustrophobia, in contrast to the four black and white pictures of the Thames alongside them. In this work, the river, like the trees, acts as an escape from the city. The severe black and white photography creates a striking divide in the middle of each frame as the pale buildings meet the dark water. Painting the Thames is always a challenge. It involves painting the city. To take a view on one, you need to consider the other.

The sky, the city and the water itself. In 150 years of painting the Thames, it’s more than light, colour and texture that artists have captured in their images of the river. In their radically different approaches, the artists I’ve touched on here have all created powerful and emotive images of the Thames, and done so by saying something distinctive about London through a purely visual medium.

Professional landscape painter Oliver Maughan was born in Hammersmith in 1982. After finishing school, Oliver went on to the foundation year at Wimbledon School of Art. Dividing his time between painting and various jobs in London pubs and bars where he would also paint signs and advertising boards between serving drinks.

After a short time in London, Oliver continued his studies at the Charles Cecil Studios in Florence. Before finishing his training with Paul Ingbretson in New Hampshire. Oliver now spends his time painting landscapes around England and abroad. Finding inspiration in the ever-changing seasons, weather, tides and light of the new places he finds. He is also inspired by the people who live in his landscapes and sail the boats that he paints. 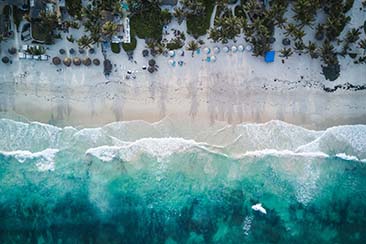 Hidden Gems in Mexico: Get off the beaten track and discover some of the country's most incredible but little known beaches...

Mexico has thousands of beautiful beaches. Most of these are known for their beautiful white sand and blue sea. And, there are many of these beaches that people outside the localities of Mexico do not know well. In this post, let's have a look at... 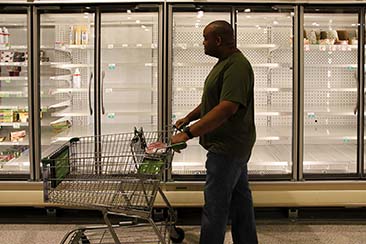 UK Food Shortages Explained: Understanding the perfect storm of Brexit, a food crisis, as well as gas and CO2 shortages...

There is somewhat of a crisis currently unfolding in the UK. Food shortages, an energy crisis, a lack of CO2 gas and record level inflation. It's a many-headed beast that goes back to January 2020, culminating into the worst UK food shortages since... 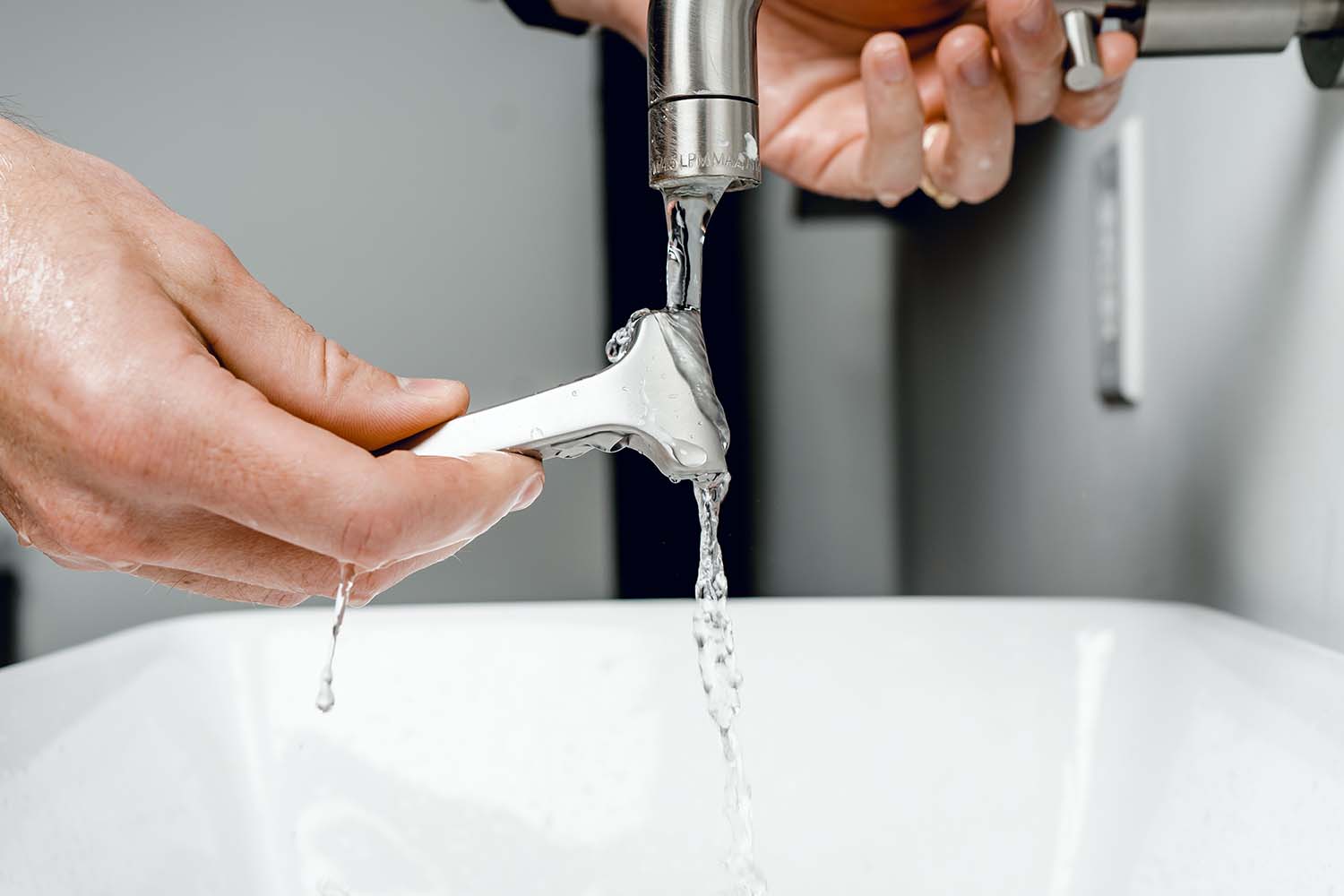 Plumbing Basics: Save money, and possibly even your home, with six quick and easy things that your plumber wish you knew...

There are some plumbing basics that plumber’s wish homeowners knew. They are not foreign ideas, but if you, as a homeowner, take heed, you may only need the services of a Hilton plumber occasionally. The following tips are not entirely for... 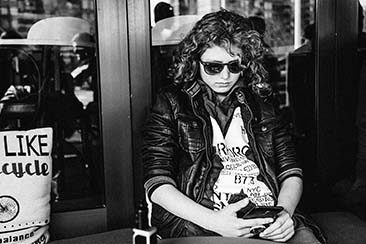 They're a true icon of the fashion world. Learn how to bring out the best version of yourself with these top leather jacket styles...

When you combine attitude, heritage, and unfiltered machoism, you get a classic item of clothing, better known as leather jackets. Regardless of your profession or interests, the leather jacket serves as the perfect option for any season. It adds an...