This two-day festival in the heart of East London came packing some serious heat, by way of weather and DJ; although I’ll start by mentioning the second day, which was essentially a Pixies gig. The park became awash with misfits and outcasts all congregating for their cult heroes. They delivered over and above the call of duty and were consummate musicians. Not a note out of placed nor a misplaced wail, they played through all their hits, while seamlessly slipping in their later material in between. Where Is My Mind? being a personal highlight of the entire festival, apparently you could hear it all along Broadway Market. Their set was worth the day ticket price alone and topped off the madness in the day prior excellently.

Now for the Saturday. A veritable turn-table ‘who’s who’, the disc jockey’s rode in the hot sticky afternoon toward a Fat White Family finish line. Stand-outs included disco-driven Todd Terje, who had us all boogying toward a sun-kissed nirvana; albeit with the help of a host of other stellar acts prior to his slot, who warmed the people of Field Day up nicely. 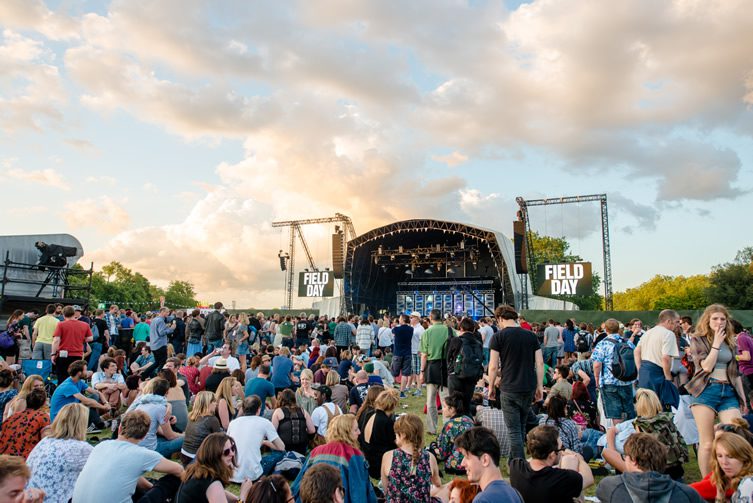 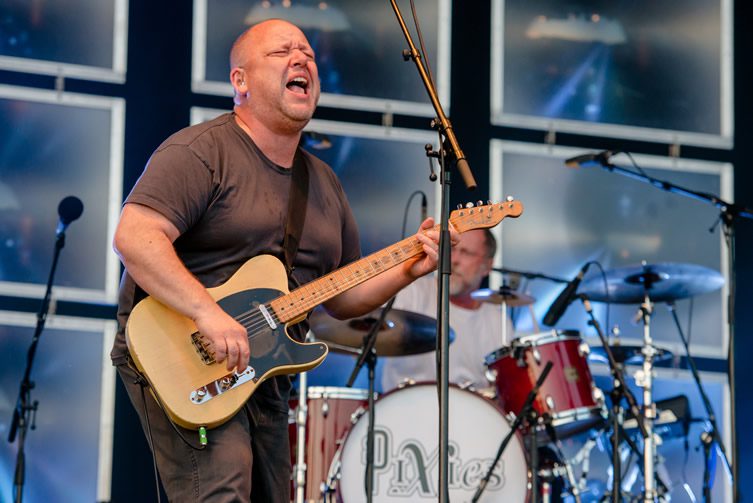 Namely, the emerging Only Real, who’s surf-washed, Jamie T-isms delighted fans and newcomers alike. Catchy riffs twanged out by guitarist Meredith Hammond were met with the half rapped/half sang musings of Niall Galvin about care-free summer days of adolescence and heart break. His lyric “kids just kickin’ it, livin’ it most” epitomised what they and his followers are all about perfectly. Certainly a band to look up and look out for and one that may soundtrack your 2014 summer and many more after.

Blood Orange very aptly took to the Eat Your Own Ears stage as hints of late afternoon sanguine pinked the blue sky. And fuck me can he dance. The rhythmical way the man refuses to stay static is overshadowed only by his capacity to hop from persona to persona and completely reinvent himself. This wasn’t the Devonté Hynes who would sulkily croon out indie ballads beneath the guise of previous-identity, the puberty-born Lightspeed Champion. That sullen chrysalis was long-shed and left in a pile of nerdy frames and cardigans. Here’s a man channelling Prince, Andre 3000 and James Brown all at once, and he had the sass to back it up.

“You’re just not good enough,” he breathily sang of a nameless lover. Nameless, but poignant to the forlorn hearts of the crowd he had hanging on every bar… 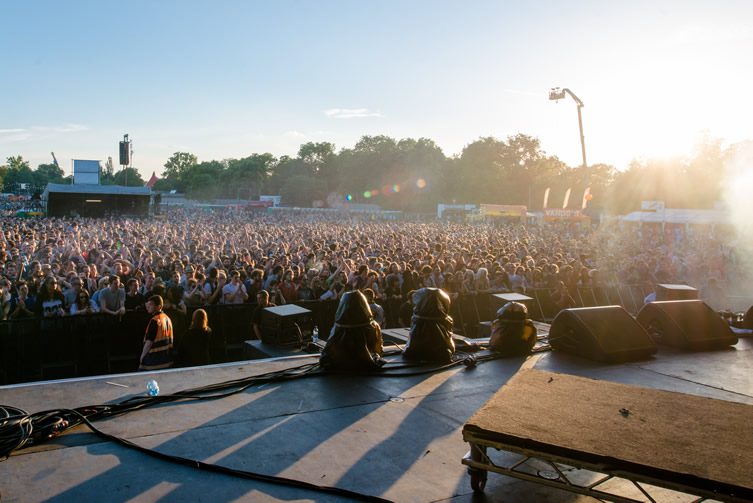 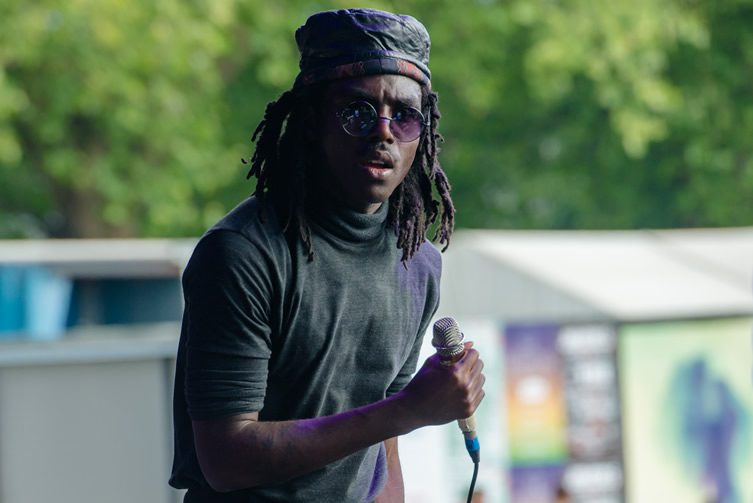 The segues between each acts provided that semi-organised chaos only a festival can provide. We were swept up by the ebb and flow of unnamed DJs, questionably shaky rides (or maybe that was our pupils) and a magnetic gazebo put on by Red Stripe that seduced all at every passing with its steady stream of summer bangers. Tradition was discarded in the sense that impromptu sit-downs were kept to a minimum. There was simply too much to see, with not a single slot in the day feeling like filler.

Jagwar Ma impressed on Crack Magazine’s stage and cemented themselves at festival favourites. Then, as viscously as the day trickled past, with many a fringe sweatily plastered to many a rosied brow, the sun abruptly went down and the conversation turned, with remarkable clarity, toward the headline acts. For all the Selma-esque choices we had to make regarding clashes – whoring our ears about the place with a bite of Nineh Cherry here and a splash of Warpaint there – the final two acts were first on the team sheet.

First up was the deranged shrieking crack-hop of Danny Brown – a toothless, Detroit reprobate whose semi-androgynous demeanour belied a solid root in rap and a mastery over the mic. But his set wasn’t your standard blunt-passing head-bop-along (although there was plenty of that). It was an assault on all senses, punctured by Danny’s incoherent lyrics about popping Molly, eating pussy and smoking “blunt after blunt after blunt after blunt”. Told you. His sets reach fever pitch from the second he rocks up on stage and he just does not let up. Hype, hype and more hype are the favoured ingredients, without a single beat in between to rest. The guy doesn’t come pre-packaged in your stereotypical hip-hop clobber. He opts for skinny jeans and Ramones T-shirts instead of box-fresh crepes and flashy chains. Rap’s answer to punk, Danny Brown is every bit as fire spitting as he his venom spewing. ADHD incarnate. 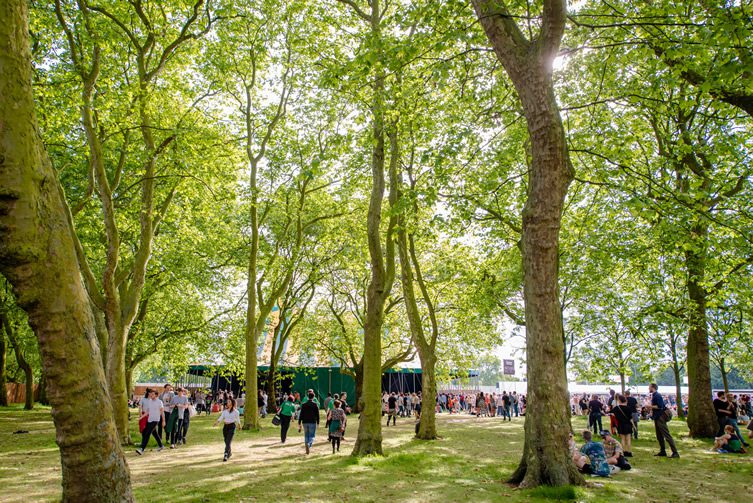 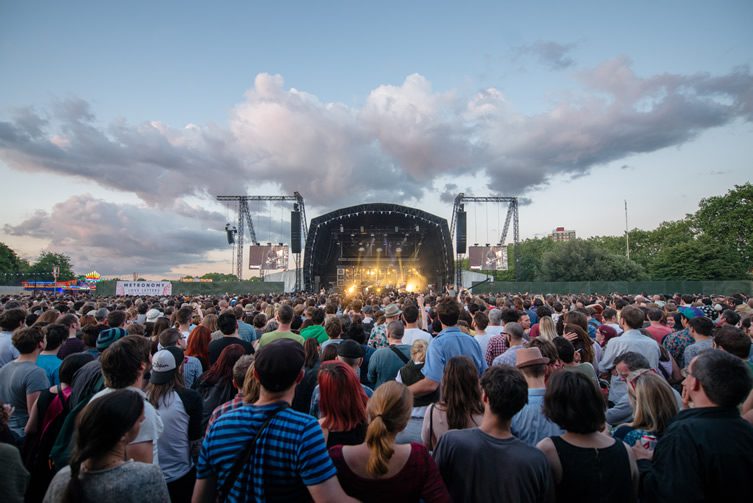 Befittingly, our attention was cut short by the allure of the almost mythical Fat White Family – a six-piece rock outfit who have been tearing off their shackles of obscurity one South London shit hole at a time. Pigs heads on stage, songs dedicated to Mark E. Smith and general public indecency had piqued enough interest to earn them a headlining spot on the Shacklewell Arms stage. We made our approach half-way through the first song. The tent had taken on the aura of an opium den – the lead singer, Lias Saudi, an elongated, glowing red dragon ‘neath the stage lights for the anaesthetised throng to chase, with outstretched paws. “Cream of the youuuuung…” he drawled out. And the connection between Saudi and the collective libido of the crowd was palpable. He writhes shirtlessly from note to note, entangling himself in his microphone cord like some drug-addled spider caught in his own web. The band were baggy eyed stars in their own right, Victorian butchers fed on raw meat and gin.

It was mere moments into their set, as we drew closer and closer to this gaunt spectre on stage, did I realise: this is fucking it. The rock and roll band Britain has been waiting for ever since Pete added that fucking “r” to the end of his name. Dirty, raw, ugly, sexy and very bad for you – all the things a punk band should be. They tap into that primal beast within that makes you want to fight and fuck and eat each other. “Me and my baby gonna touch that leather” they growl, sending the crowd into swaying, sweaty, sexed-up chaos – simple, timeless lyrics akin to those of Velvet Underground, with the piss and vinegar of the Sex Pistols – a potent mix.

Their energy is unbridled. As one, they chant mantra-like choruses to a crescendo that comes clattering down in a flurry of wailing and snares and thunderbolt guitars. It’s like watching an Iggy Pop or a Jonny Rotten for the first time. A man, possessed, Saudi has two gears: hypnotic trance and epileptic dynamite. He gives everything to the crowd (including his actual body during an extended stage dive) and we all feel and reciprocate it. Prising the torch from Pete and Carl’s shaky hands and burning the god damn house down with it, here are rock icons born. We. Are. Auto. Neutron. 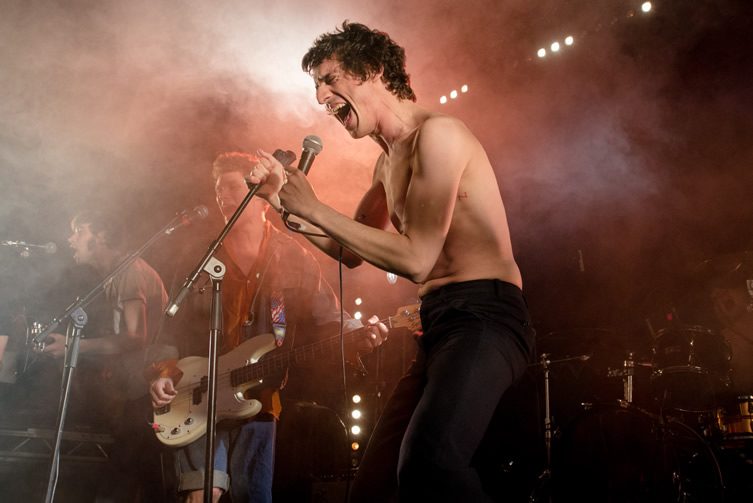