Mr Bingo is an illustrator who revels in the rebellious and the rude, gaily throwing caution to the wind like a gently skipping human embodiment of irreverence. The designer’s no-holds-barred absurdity has seen him illustrate for any body or brand – from Microsoft to Jimmy Carr, The New York Times to The Mighty Boosh; his client list as eclectic as his tongue-in-cheek drawings.

Early last year, an idea that began life – like all the best – in a pub, resulted in a stranger called Jonathan Hopkins receiving a postcard with a loving message: “Fuck you Jonathan, fuck you and fuck your shit legs”. Perhaps if this had been the internet, Bingo would have been granted a community service order for trolling – but this was good old snail mail, and – perhaps revealing underlying sadomasochism in many – the public strangely loved it. The London-based artist set up a ‘service’ on his website, and countless abusees queued up to receive their hate mail. 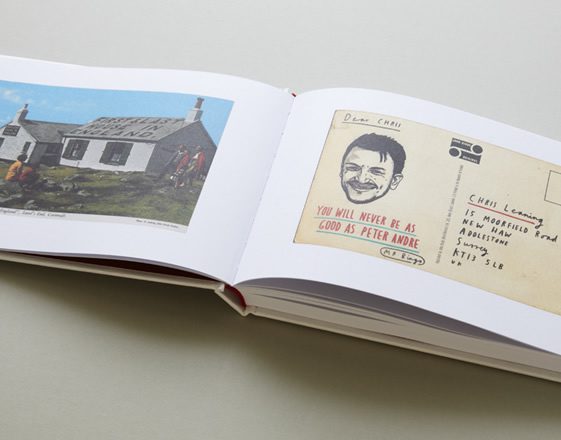 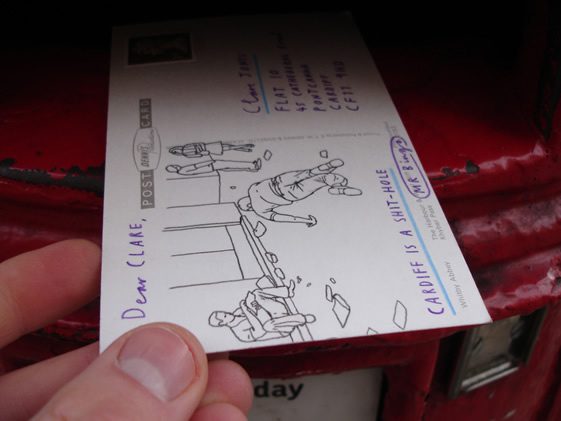 The book is a collection of your favourite 100 postcards… Christ, how many did you do?

Do you have a sweary thesaurus – you’ve sent a lot of hate mail, you must have got bored of the same insults?

No, does such a thing exist? I like them to all be individual and original so the same insults are never repeated. Admittedly some are close, but there are no two with exactly the same insult. I enjoy the challenge of coming up with new ones constantly, it’s kind of what I’m trained to do as an ideas based illustrator I guess.

‘Cardiff is a shithole’ is a particular favourite.
Also ‘Give up your unrealistic dreams’ is pretty dark.
I like a lot of them but I don’t want to give too many away! 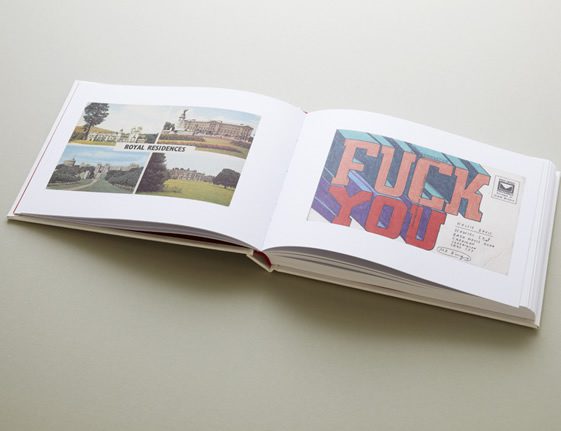 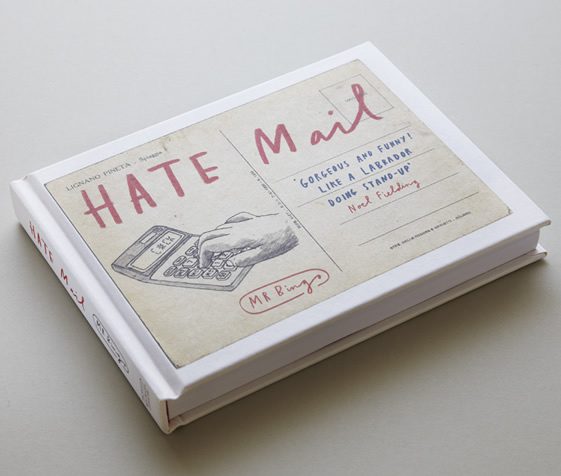 Did you ever go into detail and research the ‘victims’ of your postcards?

No, definitely not. I made it a rule from the very beginning that everyone would be anonymous, and I didn’t want to know anything about them. As soon as you know that someone is actually a fat boring cunt, you can’t really tell them – if you have no idea who you’re insulting it means you have a totally open playing field.

Did anyone get upset in the making of this project?

I don’t actually know. Some people buy them for their partners, so it’s possible I’ve ruined a couple of relationships.

You claim to love post, what are your fondest memories of the mail service as a young Mr. Bingo?

What I love is post that is interesting, which doesn’t happen often. If people look at the majority of the post they receive, it’s almost exclusively made up of junk mail, or legal things, or being told that you owe someone money. I remember when I first went to university in 1998, it was a funny time where we were just starting to use this new thing called an ’email’.

During my first year at university, some of my friends kept in touch by sending really funny letters. They were more than just a written letter and they were decorated with funny illustrations, and things cut out of magazines and newspapers; they were little bits of art sent in the post. They were really lovely, and then a year later everyone was emailing and the letters stopped. 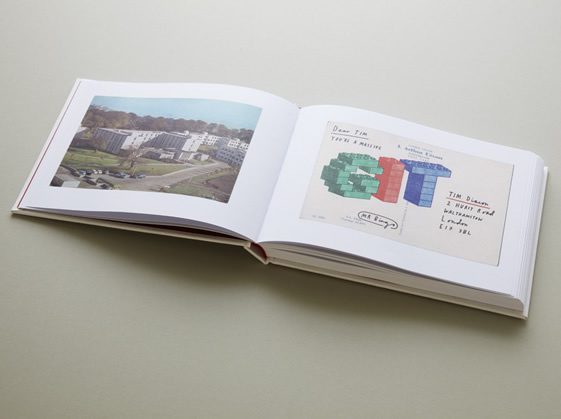 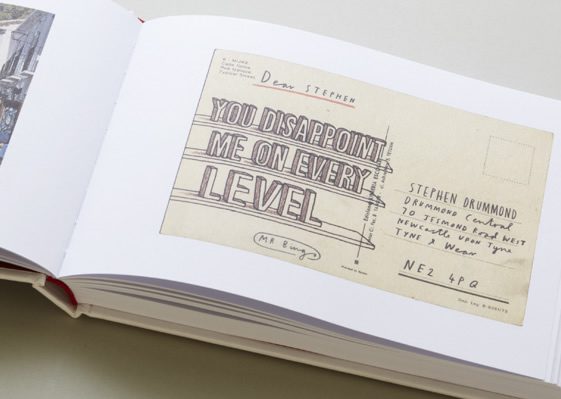 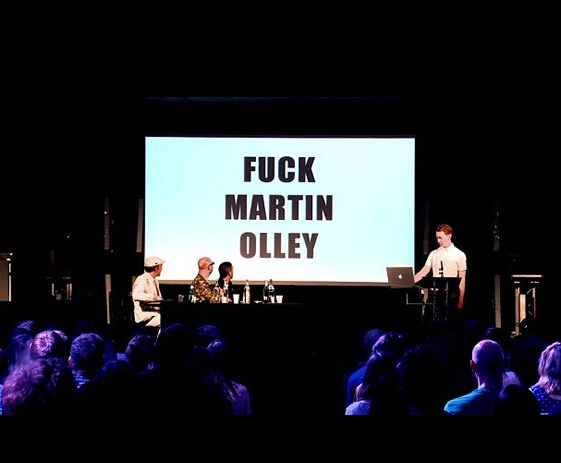 If you could receive hate mail from anyone, who would it be – and why?

Martin Olley. He wrote an angry letter to a magazine in 2003 saying that he hated my work. Since then I’ve put him in lots of bits of my work and talks to audiences [see above]. I would like him to find out about my campaign and send me some hate mail, that would be beautiful.

You’ve only got 3 postcards left, and everyone on the planet’s address – who receives your final hate mails?

It would have to be the three people who are fucking the world up the most. Probably political leaders. I don’t really pay enough attention to the news and current affairs, so I’d have to get some advice to find out who these three evil people are.

What’s next for Mr. Bingo?

I’ve lived the last 10 years never really knowing what’s around the corner so I’m going to continue to do that. 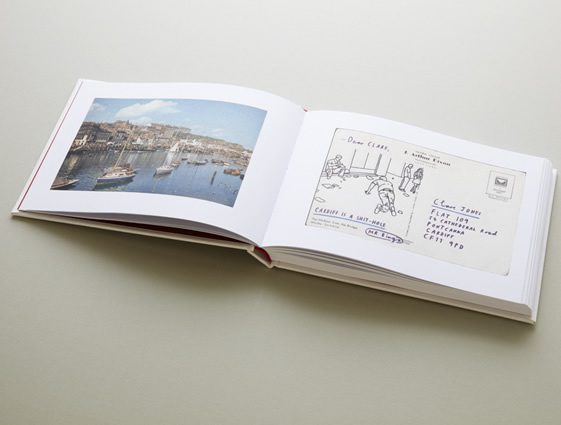 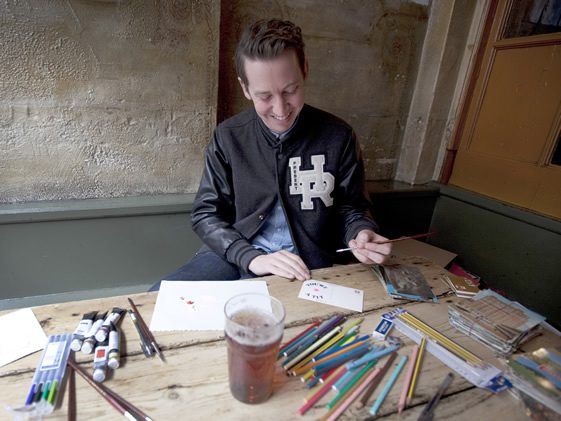