You can spot Marlarky‘s characteristicly fun and colourful paint work on the shutters of Brixton, vans parked in East London, buildings in Barcelona and Fiat Pandas in Tuscany. Brightening up dank shutters with his cheeky toothy creations, I have to say he’s one of the select few making the place look a darn sight more interesting, and amusing. With this in mind, I had to grab the London/Barcelona based artist and ask him a few questions. 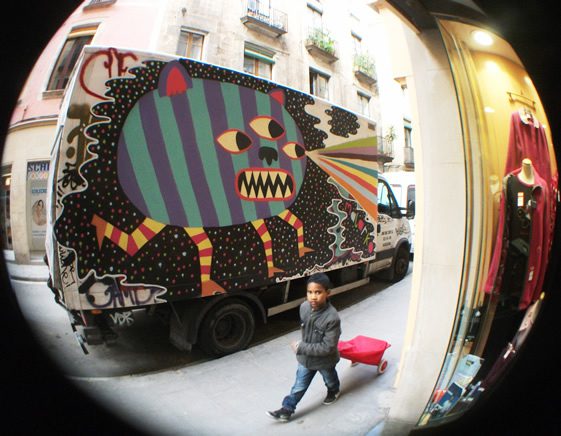 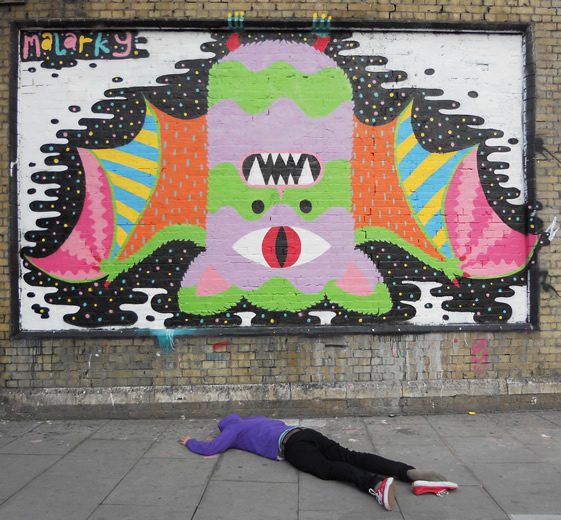 So how did it all start out? Did skating or art come first?

It all started with skateboarding, which introduced me to alternative culture, low-brow art and circumstantially towards graffiti. Album cover art and skateboard graphics were hugely influential on me whilst I was growing up, I used to try and recreate artwork from Iron Maiden vinyls I had and I was really captured by the naivety of illustrations from skateboard companies such as Toy Machine. Of course back then I had no intension on becoming any kind of artist, and it becoming my job, because it didn’t seem like anyone could do this for a living, it looked like a bleak empty dream… I just carried on skating and drawing which a few years later led me into graffiti.

You like to collaborate don’t you? Can you name a few of your favourite projects?

Ah yes, I love meeting new people and working on collaborations, it’s twice the fun when you’re not just painting alone. For some reason I probably have the most fun painting with a girl I know called Billy. We painted shop shutters in Brixton together a lot early on and the styles really complimented each other, we had the same outlook; just having fun, having some beers and painting. She lives in Berlin now but we still get to paint sometimes. Aside from this the London boys Lucas and Bromley; we go painting a lot and work on projects together, and my Barca pals Faif and Misterthefreak… just anyone positive and forward thinking that likes drinking street beers, we usually get on well. 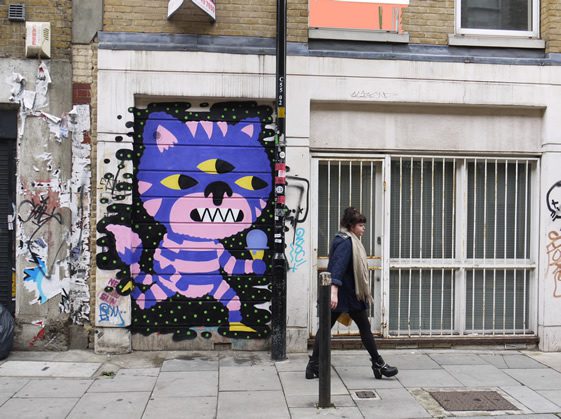 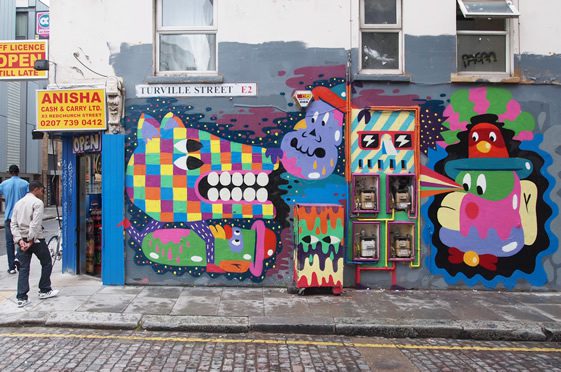 What’s your favourite area of London to drink, paint, hang around?

Drink – probably East London on free drink thursday, do the gallery opening rounds having a look at some new art and drinking all the complimentary drinks! Ha ha.

Paint – Brixton everytime, the shutters are big and smooth and every off licence sells export Guinness.

Hang – If it’s sunny I usually go and chill by the canal, sit on the grass and have some beers, otherwise I sort of tend to lurk around Brick Lane and drink tea at my friends’ shop Beach.

What’s your favourite place in Barcelona to drink, paint & hang around?

Drink – usually end up drinking in some little bars in El Gòtic or Raval, super cheap and super chilled.

Paint – I probably painted most in the Truck Park behind the Boqueria Market. Always fun with some beers, but there are lots of good abandoned factories you can paint outside the centre which are good to explore.

Hang – Always the Beach at Bogatell or Ciutadella Park, with some cold Estrella Damm! 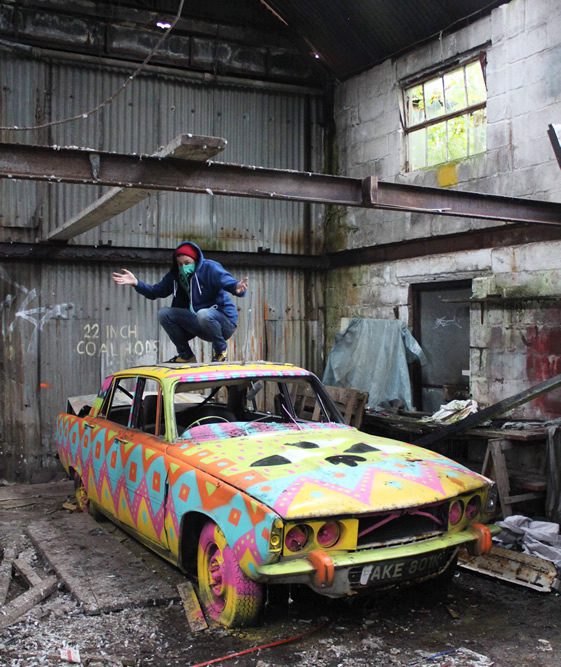 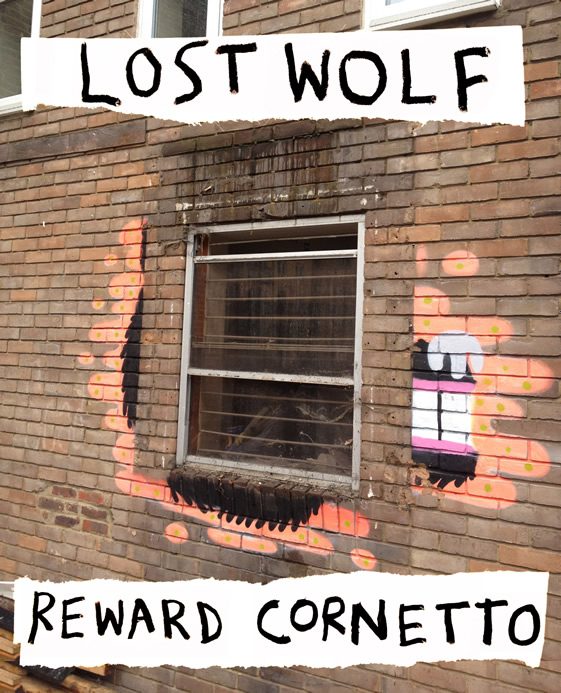 Foxes are all over London, your illustrated foxes too… what are your other favourite urban animals?

Hmm not sure, the only urban animals you can ever see in the city seem aside from foxes are pigeons. I sometimes like to sit and watch the dogs on the green by my flat, running about and rolling around on the grass having fun, thats about as inspiring as London’s urban animal scene gets!

So have you found out who stole the wolf (someone actually stole a mini-shutter Malarky painted)?

Ah Mr Wolf! I guess it’s a mystery. Maybe some things are better off that way, I miss him a bit but I’m sure I’ll see him around again. Although someone said they know a guy that has a cousin whose friend might know the girlfriend’s mum of the guy what took it! 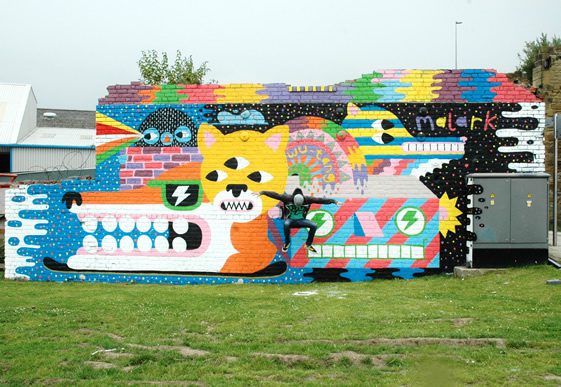 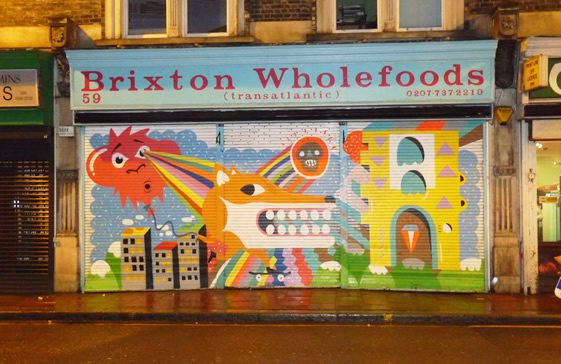 Which city in the world would you most like to get your hands on?

I want to paint São Paulo a lot! It looks perfect and sunny, and super lax with graffiti laws. But I like going anywhere for painting holidays, the sunnier the better (ha ha), I have my eye on a few cities in Italy where I know some people. I also want to paint some trucks in Paris, and I’m just starting a painting project that will be in Jamaica.

Love your Fiat Pandas – how did that project come about?

It was sort of a by-product of a project I was working on at the time, we were in Italy and it seemed like a good idea! I liked how they came out, I’m not sure what happened to the cars, I hope they’re driving around some remote farm in southern Italy being used to transport olives back to a farmhouse somewhere. 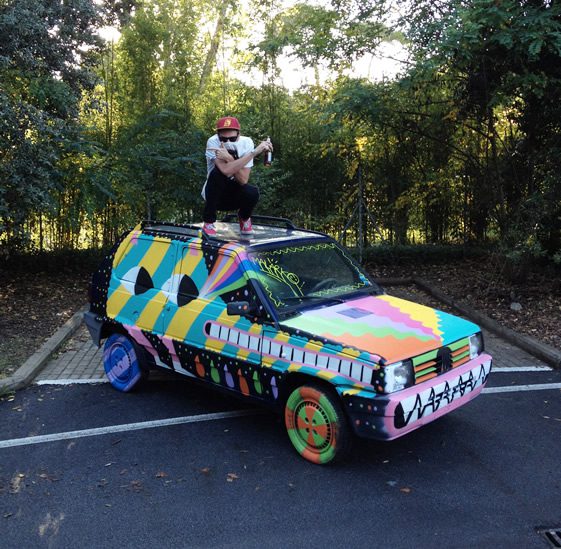 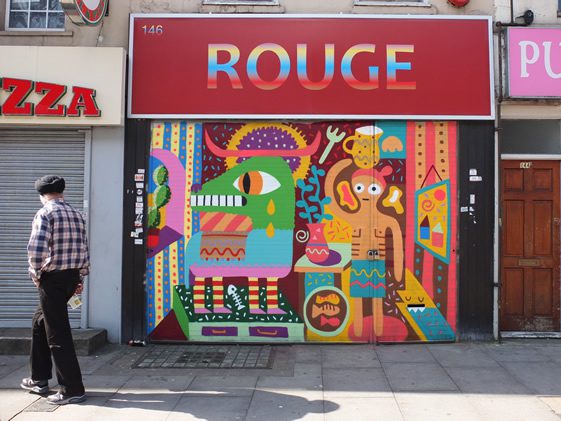 So who are your heros?

Just all my friends who are carrying on painting and working on what they want to, and not listening to people telling them to get a real job!

And of course… what’s next? 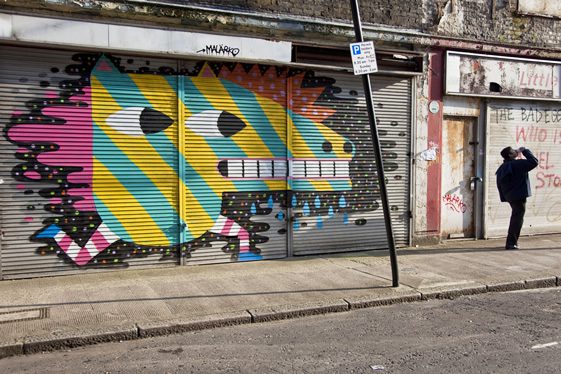 It’s fair to say that the man loves paint, travel and most importantly beer… so huge thanks to Malarky for taking the time to chat to us… we owe you un montón de cervezas!