The Dorset-based artist’s ‘anxiety’ is one of generational paranoia – a double-edged sword: fear passed down to us from the post-war generations, and media and marketeers responsible for creating a generation with unrealistic desires for unattainable treasures; fast cars, diamonds, expensive sneakers. His paintings debate these issues through a high-definition palette, waking us from our “comatose consciousness” to join his debate. With first hand experience of anxiety after a near death experience, Semple has long lived with niggling fear. Turning to paint proved his catharsis, and it was Ebay – not a top London college – that launched his career. Intentionally provocative and widely collected, Stuart Semple explores advanced technologies that enable increasingly immediate gratification and pop culture at saturation point.

We went to meet Semple in his Poole studio, getting to the bottom of the Anxiety Generation, fear, the internet, keeping fit, and Inspector Morse… 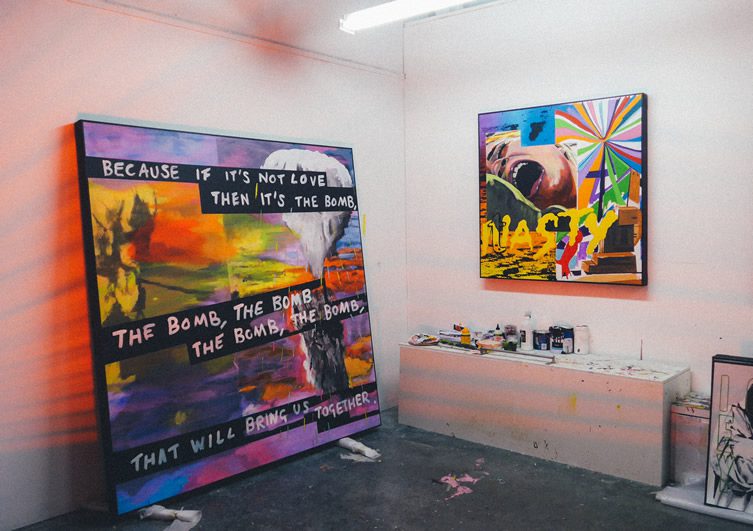 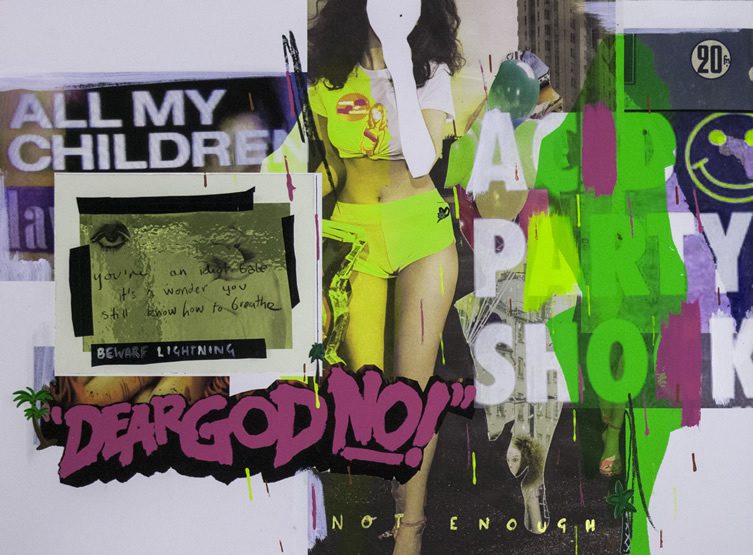 Stuart Semple
You Are Not Enough 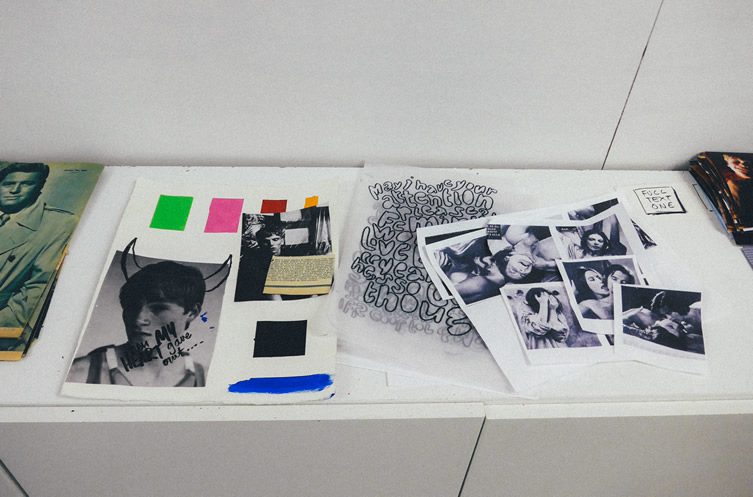 Can you tell us what we are to expect from Anxiety Generation.

There will be 22 brand new paintings, plus some works on paper. Damian, who owns the gallery has collected my work over the years and now he’s moved into the bigger space on Bruton Street, we thought it might be nice to do a show together.

In the show you are utilising adult themes – sex, violence and horror – to make your point about our collective anxiety. Why so brazen? Is subtlety or the soft approach out of the question?

Those issues have always been in my paintings anyway, but they have been buried beneath the surface. In the new works I have brought them right to the surface, and I’m facing the issues head on. I’m being much more explicit about it, which I think is important.

In some of your personal statements you say that our generation doesn’t have anything to fight for, or any major issues to deal with – so we find our own remedial issues to fight, i.e. the riots. Do you think we need tragedies?

No not at all! It would be lovely if we were all at peace. What I mean is that our parents, and their parents, were very exposed to the fragility of the world. My grandparents remember the atom bomb and they know what happened in the Holocaust, they were physically taken away from their families as London was bombed. People were killed and some people didn’t come home.

They were really close to that, which gave them a level of fear and anxiety about things, which passed on to our parents. Most of these battles have been fought for us so we can enjoy the fruits of all that. But our parents have instilled a risk in us from ‘don’t touch that’ to ‘don’t talk to strangers’ creating a risk industry. 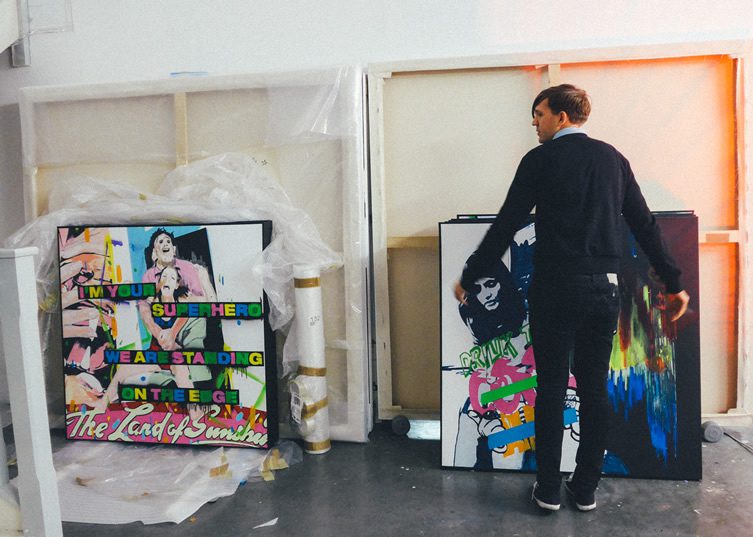 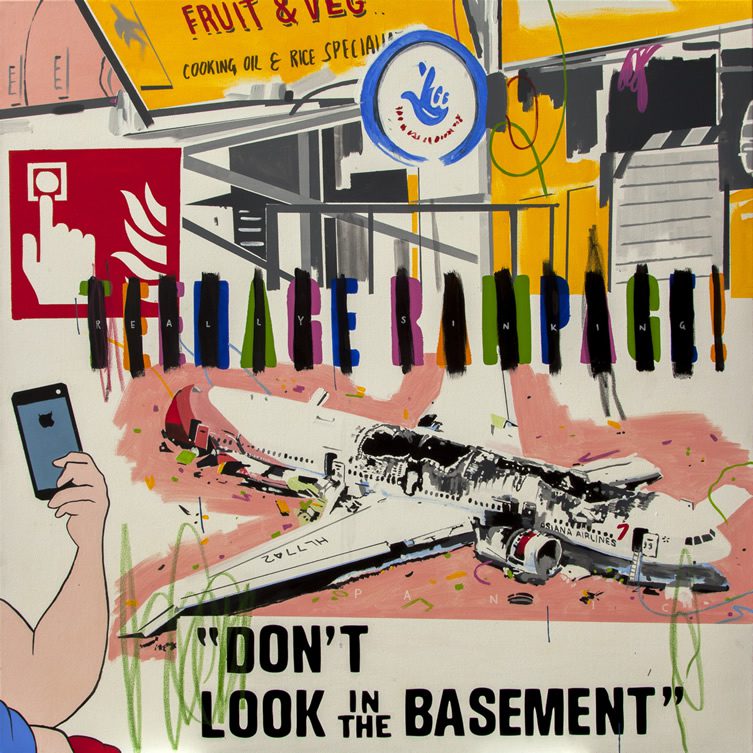 Stuart Semple
Let’s See What You Could Have Won 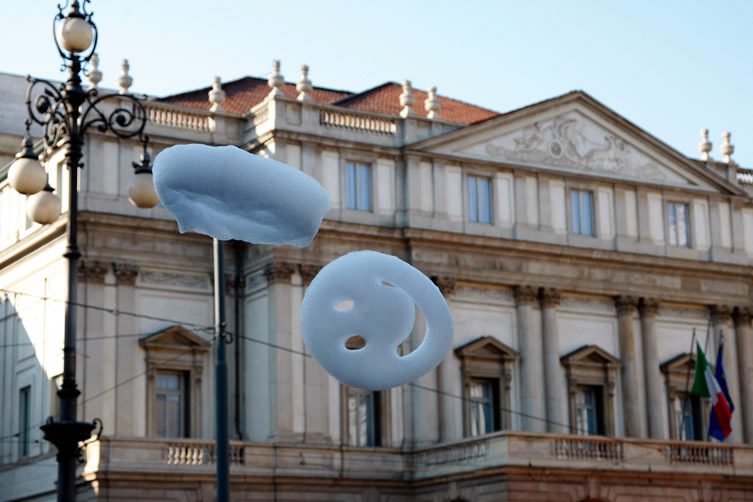 How do we stop scaremongering?

A bit of common sense. Not everyone is going to stab you or rob you. Most people are alright.

So why are we so fearsome?

I think the media has a job to keep us entertained. To keep us in this state of stimulation, and we’ve got to the stage where we demand some sort of horror, shock or violence. Otherwise the ‘news’ doesn’t affect us. It’s the ticking news, like on Twitter (that often isn’t even accurate) that keeps us on our toes. From ‘what was Kate wearing?’ to ‘did she head-butt Jay-Z in the lift?’ – the news has become entertainment.

Does all this ever drag you down when you’re working? Can you detach yourself from that frustration?

I am actually very bothered about it, to the point that I want to make a whole show about it. It gives me energy but I don’t dwell on it, it fuels my work.

Tell us about one of the Anxiety Generation paintings.

The ADHD one, Startin’ Somethin, is an interesting one. It’s a direct image from the riots. There is a misconception that the youth are apathetic, that they sit around playing on their Xboxes and are all connected digitally, not with the rest of the living world. I can’t think of anything more active than going out and rioting, as misguided as it was.

The ADHD words in the painting could imply attention deficit hyperactivity disorder, but I’m actually refereeing to HD as in High Definition. When the atom bomb happened, the world’s media was in black and white and news was slow. Yet you saw those riots in HD in your living room as if you were right there. And that is a huge shift, it feels very real. 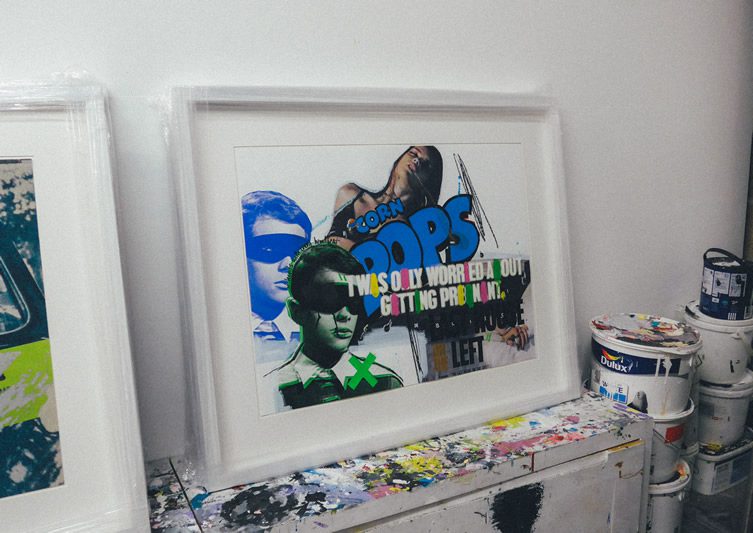 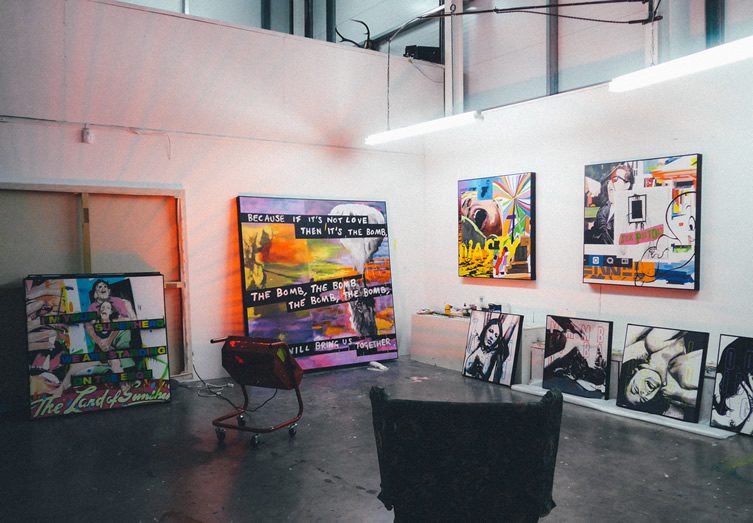 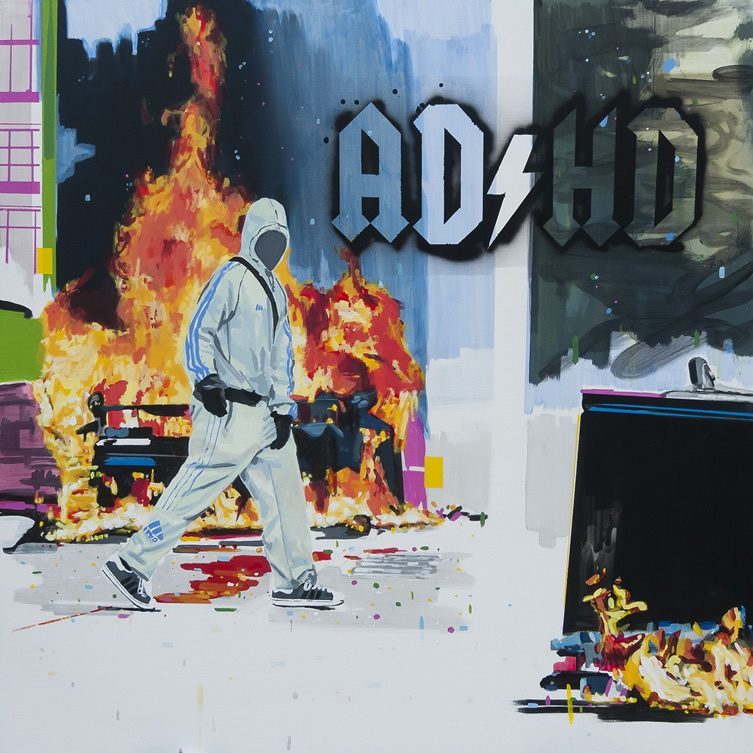 Tell us why you use such a bold (HD) palette in your paintings, yet your installations are elegantly subtle.

I’ve always been interested in colour and the artists I admired form an early age – like Van Gogh, the ultimate colourist – made me realise that there is nothing you can’t do with paint. You get these rich pigments and it’s just too tempting not to use bright greens or pinks. It is very natural for me to use paint. I grew up looking at these vibrant colours on various record sleeves.

What about your installations such as Happy Cloud or Jump?

I think with my public art I tend to make room. It isn’t really about me saying something. It’s really about the public making it their own. So the less you have in it, the more people can bring to it. They bring the ‘colour’ by interacting with it. The paintings are very much about me and my public art is very much about them. That’s when I disappear and have very little to do with it.

You’re a multimedia artist but essentially a painter. What is your preferred medium, or does that depend on the idea?

Paint! I approach everything like a painting. Even if I’m working in film I approach that as a painter. I get weird and wonderful ideas and I have to realise them – sometimes it’s film, or installation but most of the time it’s paint.

When you get an idea, how do you approach it?

It’s always different. I have books and books of ideas written down. I describe them in words first. My ideas never start as pictures, always words. 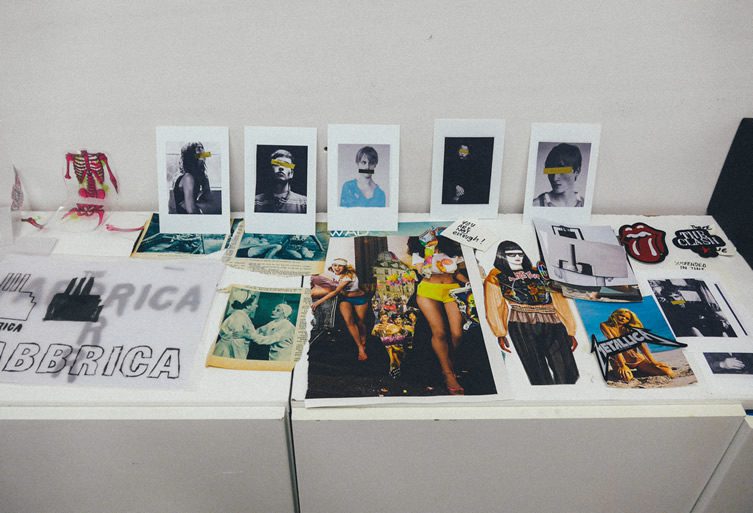 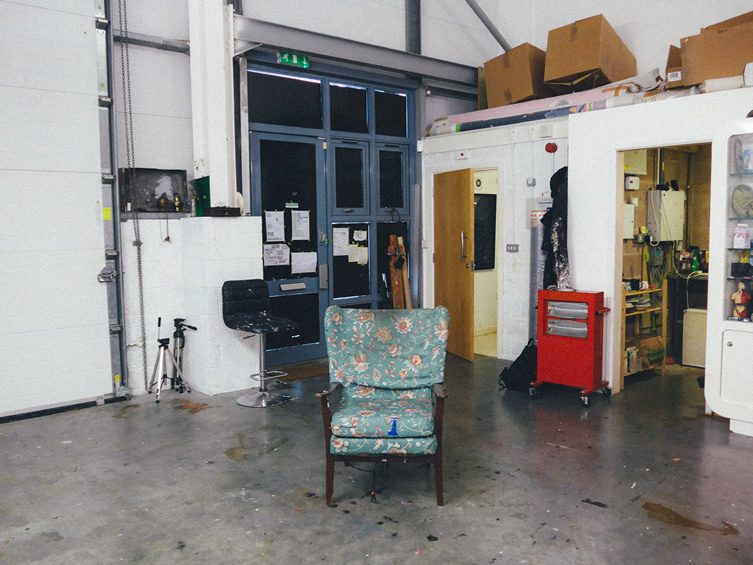 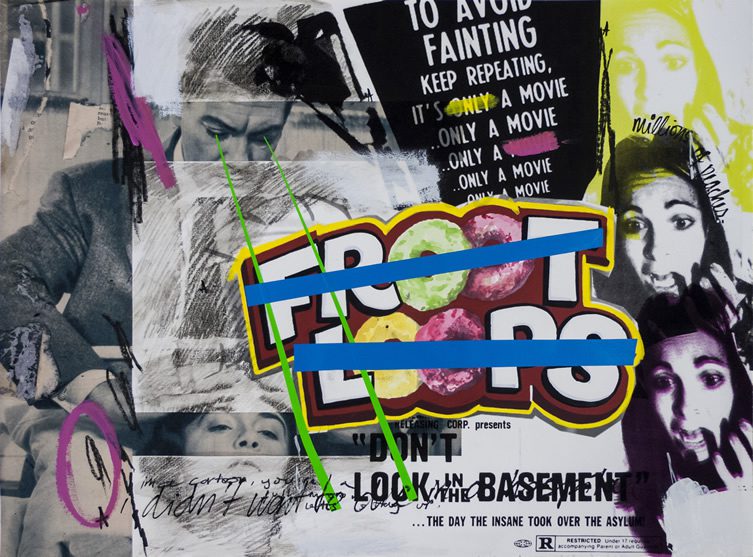 Stuart Semple
She Died on TV

You began your career selling paintings on Ebay. As much as the internet helped you launch, it is also kind of a nemesis. If it wasn’t for the internet all the things you fight against wouldn’t be so immediate. How do you deal with that?

It’s a double-edged sword really. The internet is still fairly new. In the scheme of the world it still doesn’t know exactly where it is. It’s not like radio that knows exactly where it is. Ebay was brilliant for me. It was a long time ago, and back then there were no blogs, or social media, but by putting up my images everyday I could connect with people. They would follow me and we would communicate.

It was less about selling my paintings, even though I did, and more about communicating ideas with people. Every day I’d put a new painting up. They were like a pictorial diary for me. I made 3,000 in three years and people would tune in to watch them arrive. In those days there were no credit card transactions so people would send cheques with a letter to me. I would write back and send them the work, I guess it was like a social media of sorts.

Can you tell us where your favourite place in the world is, and why?

I can! It’s a very strange place. There’s a little enclave at the back of Bournemouth that is a little woodland. There is this tree that I’ve had a strange affinity with since I was about eight years old, I visit it every few months and when I’m there I’m in total peace with the world.

When not creating, painting or curating, what do you enjoy doing?

I enjoy working out at the gym, I run five kilometres twice a week, do TRX (suspension training) and work with kettle bells.

Wow! Why so much fitness?

So I have the stamina to paint, so I don’t ache. I do it for my work, and at the same time it pushes me mentally. I’m in the studio from 8am and don’t leave until 7pm, so go to the gym for two hours in the middle.

I love films by David Lynch, Michel Gondry, Harmony Korine, Peter Greenaway and Vincent Gallo. In terms of TV I love Inspector Morse, Poirot and Miss Marple – any whodunnit really. I love music too, it is vital to my work. All my work starts from a song. A lyric will pop up and I’ll write it down on my blackboard and eventually they become a painting. I like a mix bag from Elliot Smith to Blur, The Jesus and Mary Chain, Echo and the Bunnymen… 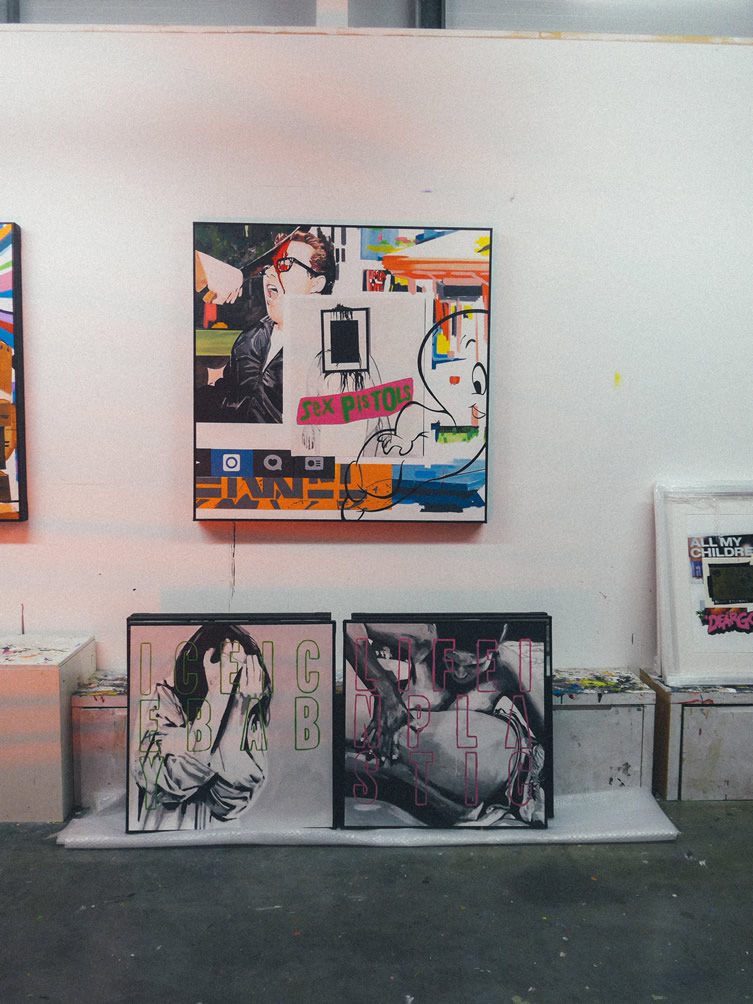 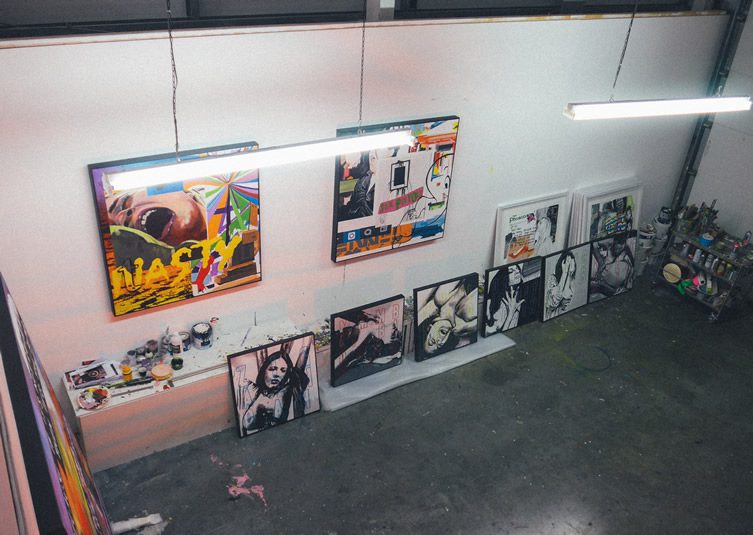 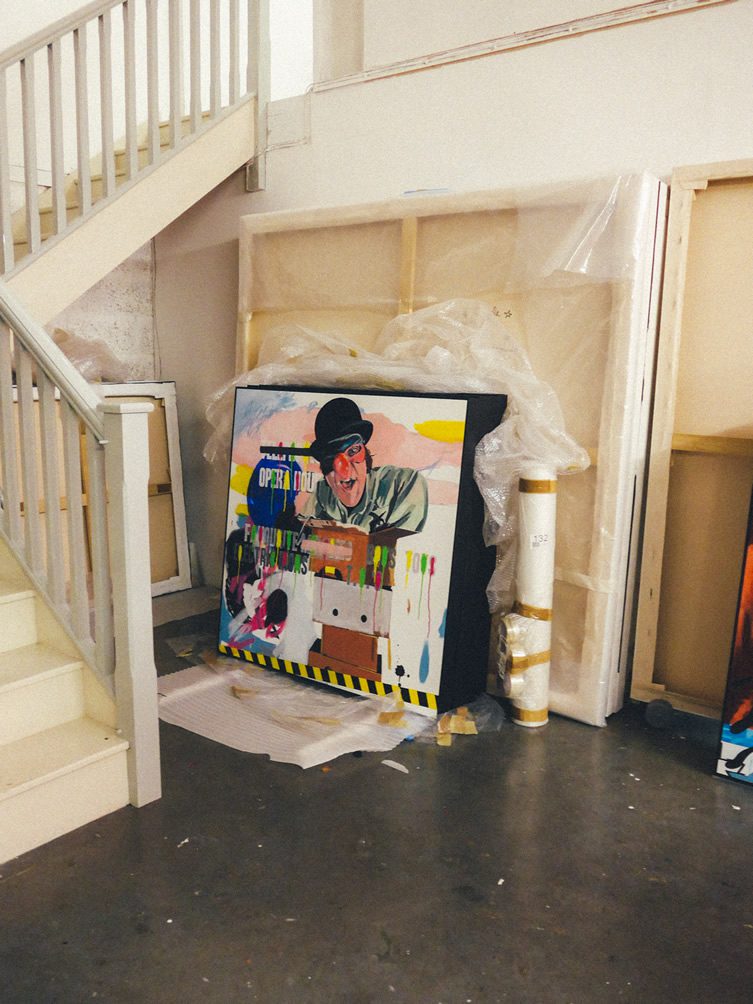