Charged with the task of creating scenescapes that defy logic, suspend reality, amaze and perplex; most resort to Photoshop, 3D modelling or some other technological somesuch. When asked to create such a visual scenario for a new Ford advert, London-based Welsh photographer Elise (just the singular name, in an ’80s popstar kind of way) simply suspended a new Fiesta in the middle of a photography studio and prettified it with all and sundry – from balloons to giant shuttlecocks.

Of course Elise had a little help, a new Fiesta weighs over a ton after all, but the elaborate setup was not far removed from the meticulous sculptural photography that the creative has been crafting for some time, clients like British Vogue and Sony Playstation offering commercial interludes from the inspired personal work she constantly creates.

Asking the viewer to put aside conventional perceptions and step inside her bubbly world of exuberance and vivid colour, Elise smashes together pop art and surrealism with a liberal helping of commercialism – it’s easy to see why high-profile clients are queueing up to have their own little slice of convention-distorting excellence courtesy of she with one name. We were keen to find out more, so put our questions to the ‘happy-go-lucky’ collector of pound shop kitsch – here’s what she had to say… 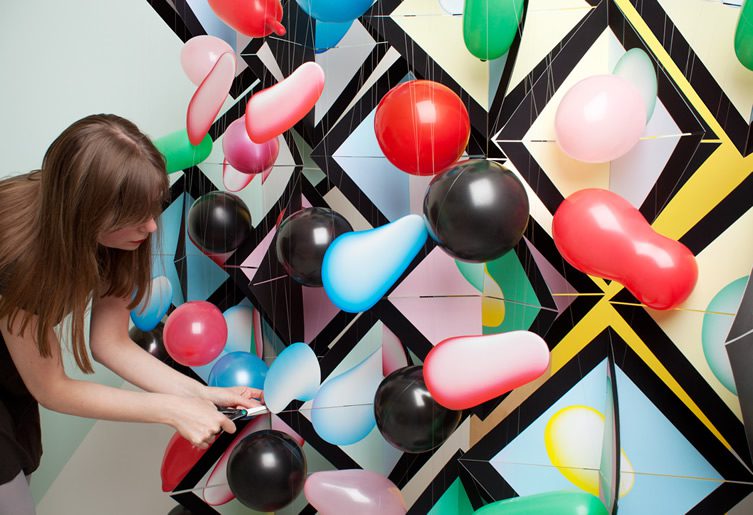 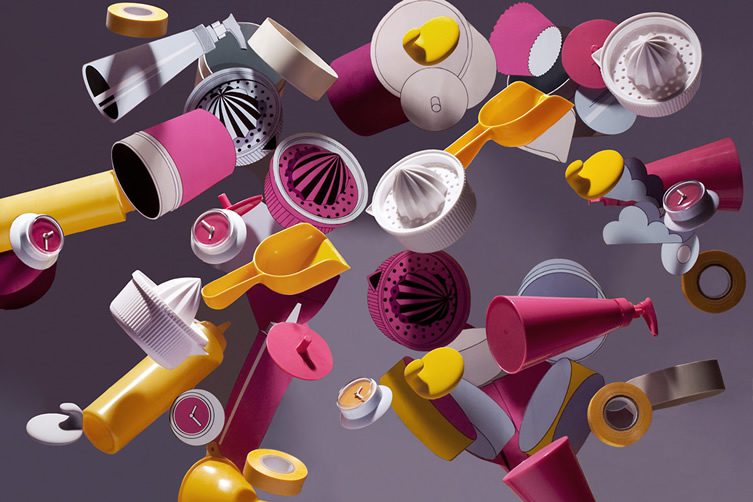 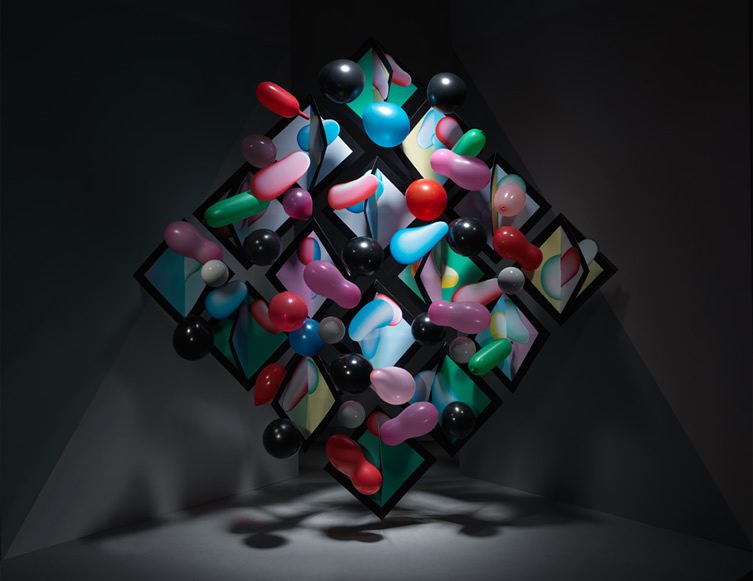 Hi Elise, can you tell us a little about yourself?

I’m a London-based artist and photographer. My work combines photography with sculpture to explore the constructed image. My way of working blends two and three dimensions to form complex, colourful spaces captured by the photographic lens.

The making of your images is seemingly as important as the image itself – do you see yourself as a sculptor, or artist, as much as you do a photographer?

I create complex, three dimensional spaces that I carefully light and then photograph, the photograph becoming the permanent, lasting manifestation of my process. So process is very important; the roles of sculptor, artist and photographer are all equally significant in making the work. I build the installation from the position of the camera lens. This pre-determined perspective dictates the overall form and coherence of the composition. In turn, as the piece is photographed, the transition from installation to photograph is also important.

It provides a shifting sense of perception, where dimension, scale and perspective are called into question. I’m interested in the tension that exists between these different aspects of image-making. They create a dialogue about a space and time beyond the picture plane.

Bright colours play a key role in your works – would it be fair to say you’re a happy-go-lucky artist?

I like the phrase ‘happy-go-lucky’. It works well in relation to the subject-matter of my work. I’m very much a ‘pop artist’ in the materials, colours and objects I use in my images; the plastic surface of everyday objects, pound shop kitsch and throw-away pop culture. I’m fascinated by our relationship to these objects; how they evoke meanings and memories that we experience both on a personal level and as consumers of popular culture. 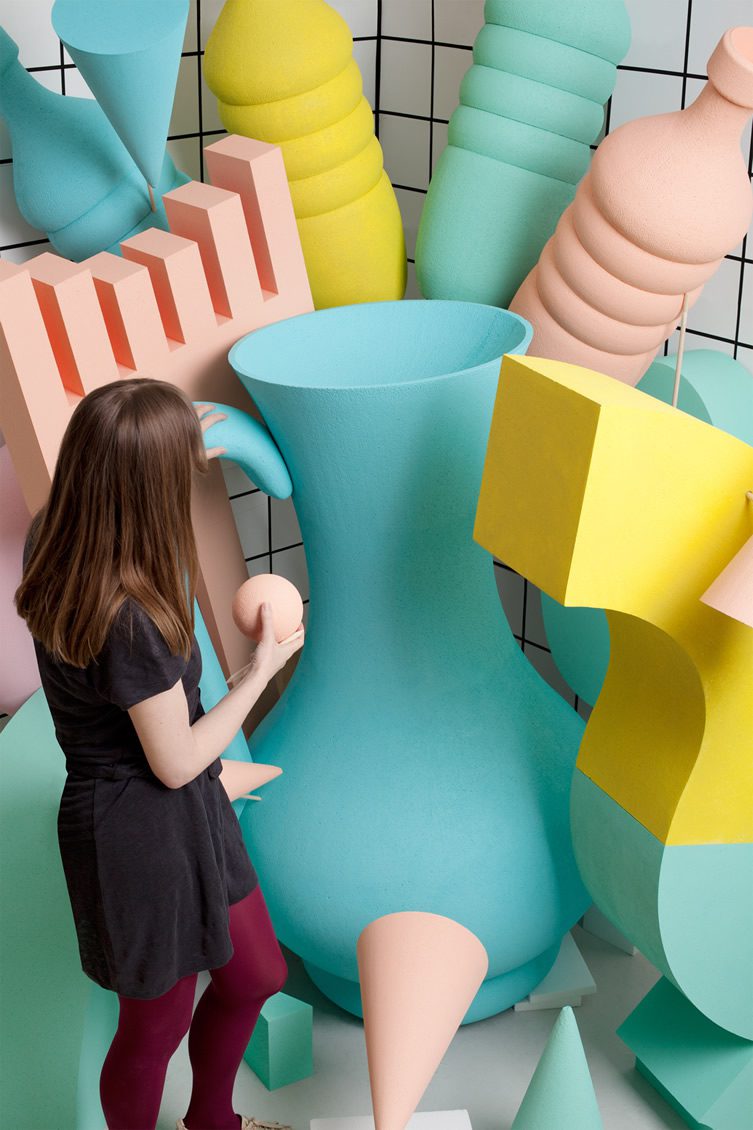 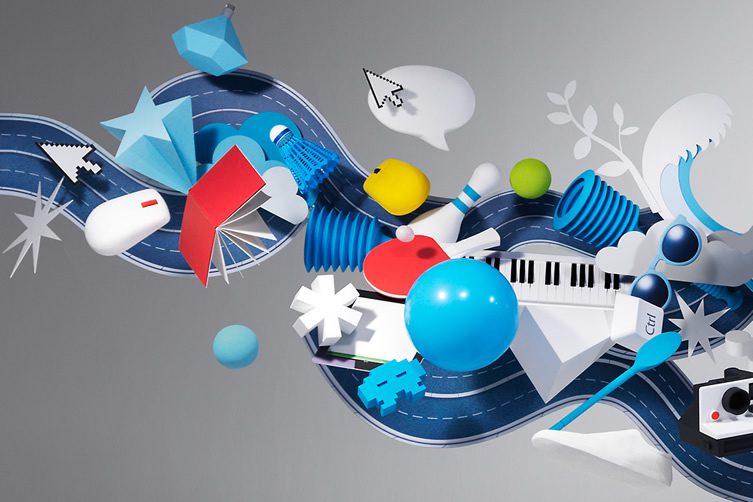 It’s difficult to generalise about ideas as there are always different inspirations for each new image. For a series I’ve been working on recently, I’ve been particularly influenced by the colours and playfulness of the Memphis Group. In another new series, I’ve been inspired by the extraordinary landscapes of the Surrealist painter, Kay Sage. I also find that the materials and objects I use shape the work I’m making. Whether it’s paper or polystyrene, plastic or found objects, these materials open up all sorts of exciting possibilities for creating worlds of artifice and make-believe.

You’ve worked with some pretty weighty clients, how does that compare to the way you work on personal projects?

I’ve been lucky with commissions, in that people have approached me with examples of my work and with an open view of how I might create something for them. I really enjoy commissions, as through them, I’ve been able to share my work with a wider audience. I’m constantly creating personal pieces, and so my commissions most often form a part of a series of images that I’m creating as personal work at the same time. 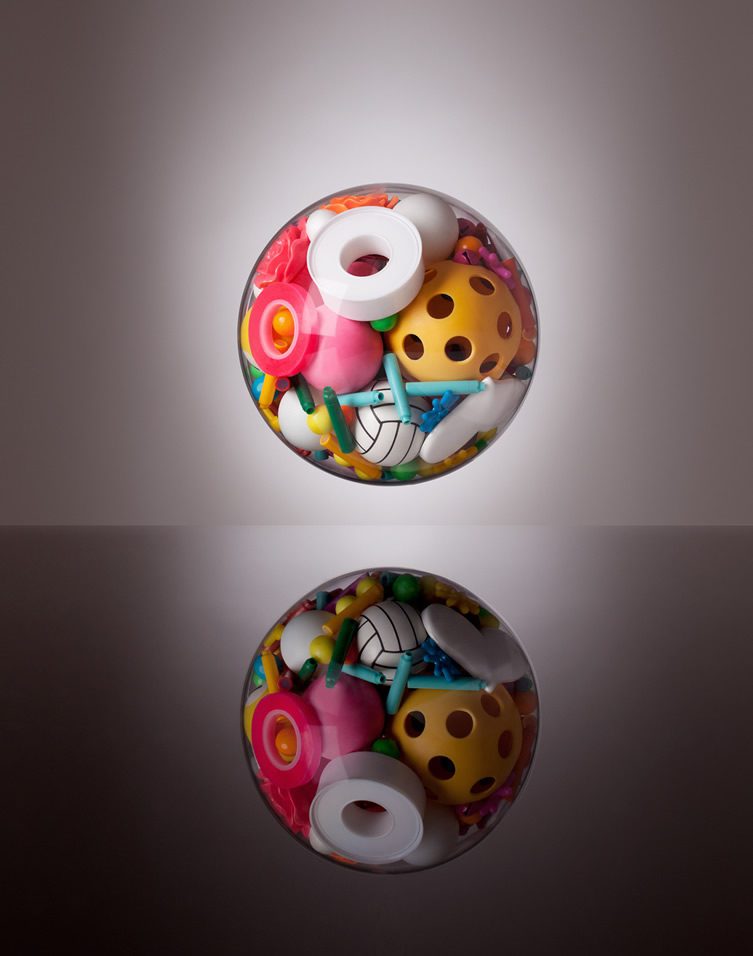 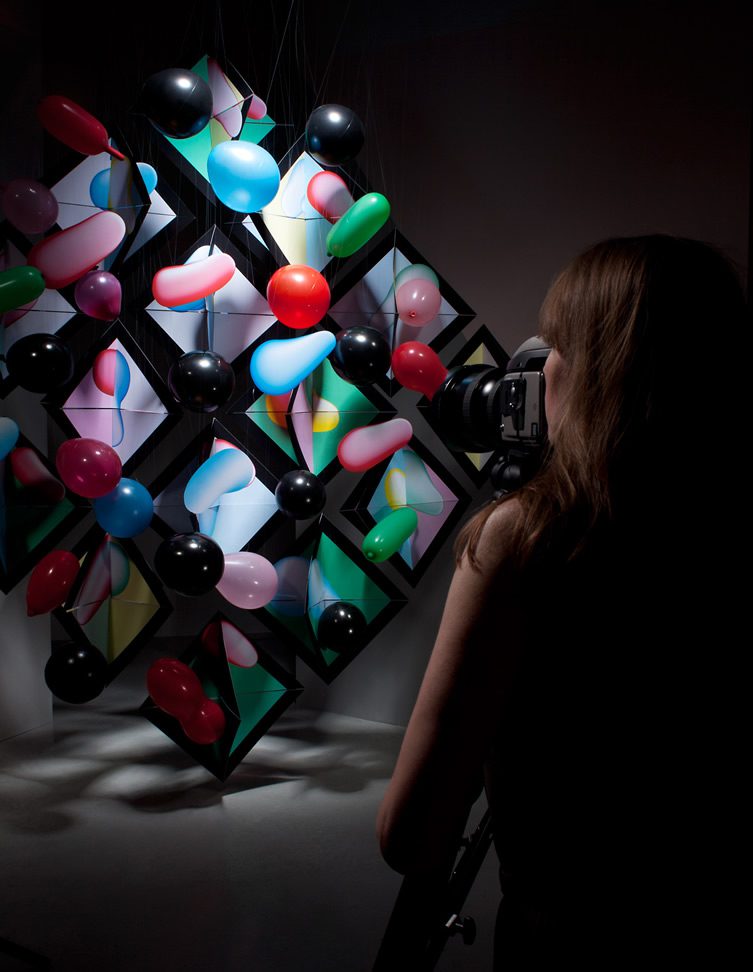 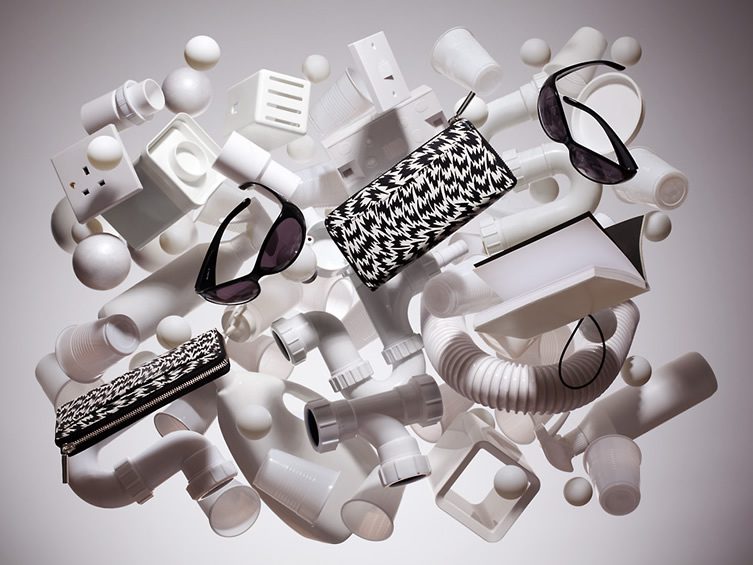 I spend a huge amount of time in art galleries, museums and cinemas, absorbing everything visual. I think my biggest inspiration though is the city itself, as it’s full of rich, visual detail and constantly changing spaces.

Collecting things! One of the inevitable outcomes of my work is that I collect everything. Whether it’s pound shop kitsch, junk from a local skip or old, used packaging, I can’t throw anything away. It all eventually finds its way into an artwork, either as inspiration for an object I make or as an element itself.

I’m just about to embark on a new series of images, using the most throw-away of objects repeated many hundreds of times, to form a vast, multi-coloured environment. I’ve always been interested in the idea of repetition. It connects the world of mass produced, consumer objects to the tools of digital image manipulation that have become so relevant to contemporary photography. 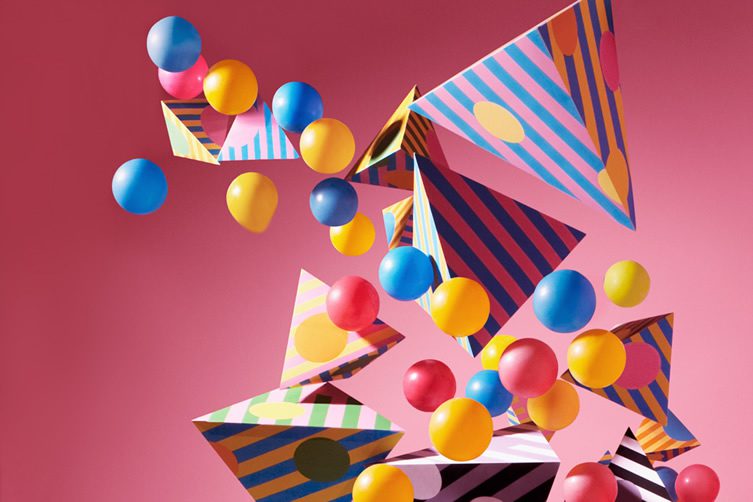 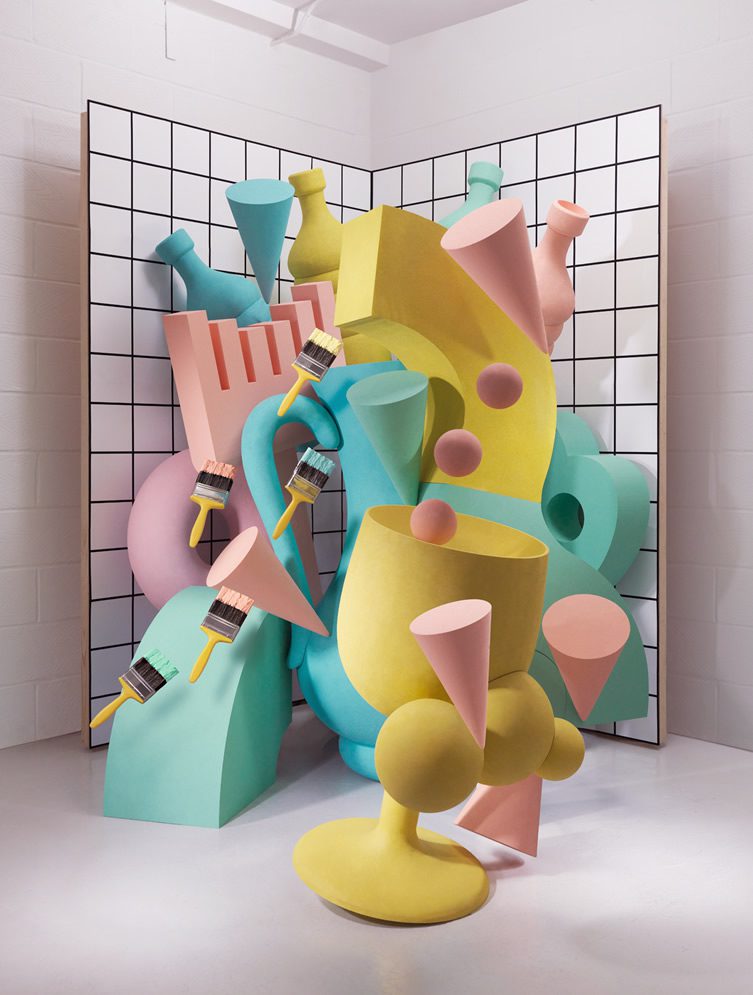